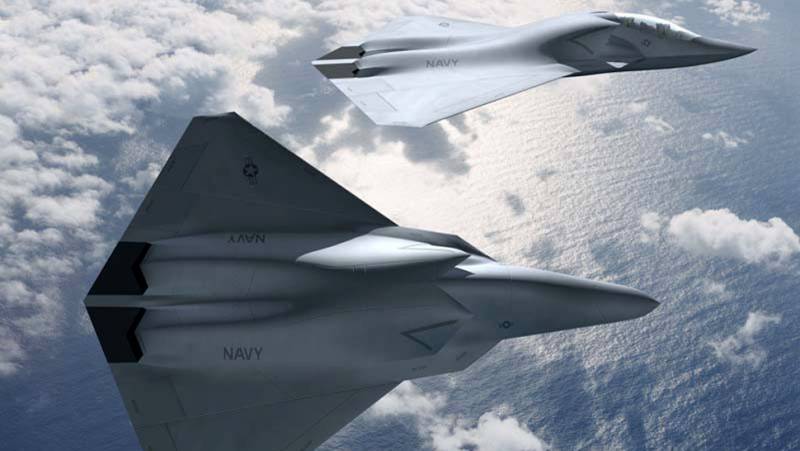 One of the concepts of a promising fighter from Boeing

Several new 5th generation fighters have been developed and brought to production in the leading countries. Also, work begins on the next 6th. What the planes of the future will turn out to be is not yet clear, but various assumptions and ideas are already being expressed. So, recently the American company Raytheon Technologies Intelligence & Space disclosed its opinion on a topical issue.

From the point of view of the contractor

It is known that a promising fighter aircraft is already being developed in the United States, and this project has already reached the test of a technology demonstrator. At the same time, as far as is known, the full technical appearance of the future combat aircraft has not yet been determined, which requires new research and development work. This attracts various commercial organizations that are ready to participate in the creation of a new generation of fighters - within the framework of lucrative contracts.

One of the potential participants in new projects is Raytheon, which produces aviation equipment, weapons, etc. She does not plan to create her own aviation platforms, but is ready to help aircraft manufacturers by developing and supplying the necessary instruments and products.

A significant contribution to the overall potential of the modern 5th generation fighter is made by onboard electronics, and in the next 6th such trends will continue. This increases the role and responsibility of the equipment developer - Raytheon or other organization. Realizing this, the company is studying existing technological capabilities and looking for ways to further develop technology. 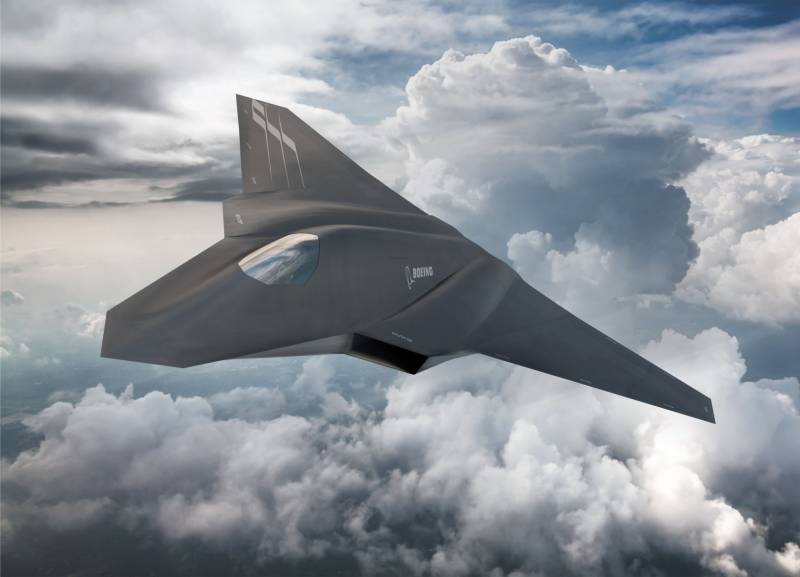 Boeing project from 2016
On April 13, Raytheon Technologies Intelligence & Space held an online conference on aviation equipment trends in the context of the next generation of fighters, Aerotech News reported. Company representatives named six main processes that they expect in the future when creating new aircraft. At the same time, we are talking only about general ideas, but not about specific platforms and samples.

Raytheon believes that avionics complexes will be developed for new aircraft based on multifunctional hardware, supplemented by adaptable software. As an example, a hypothetical electronic system is given that combines the functions of a radar, an electronic warfare station, and communications equipment. This architecture of avionics will change the basic approaches to the use of instrumentation: individual devices will be replaced by corresponding software modules.

The second forecast calls for the combat aircraft to become a "flying data center." The fighter will receive a set of high-performance computing facilities, incl. with artificial intelligence. This will speed up and make data processing more efficient, and avionics will help the pilot make the right decisions in an environment of any complexity.

The third trend is the creation of combined manned-unmanned teams (MUM-T). The 6th generation fighter will be controlled by a pilot, with the participation of its own artificial intelligence. AI drones will work together with him, carrying out the commands of the presenter. The development of AI will make it possible to increase the independence of the slave UAVs. 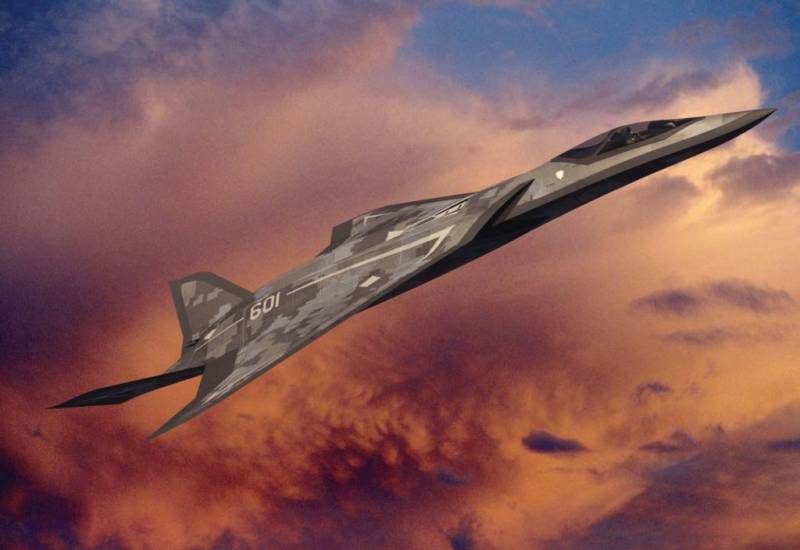 Lockheed Martin offer
Raytheon expects next generation fighters to self-land on an aircraft carrier. The necessary technologies already exist, and in the future it is planned to improve them and introduce them into new projects of manned and unmanned aircraft. In particular, the company is working on the issues of increasing the accuracy of the aircraft in the landing zone. At the same time, it is noted that automatic landing will be useful not only for military aircraft.

The fifth forecast concerns development methods and tools. Digital engineering will change the process of designing hardware and creating software. Along with other things, new approaches will simplify project cost estimation and control over expenses. The American industry has had a negative experience of uncontrolled growth in program costs, and it is necessary to prevent similar situations in the future.

The sixth prediction concerns the further development of the ideas of the open architecture of avionics. Already, aircraft instruments use unified interfaces to simplify repairs or upgrades. These principles should be developed with obtaining modular capabilities. The fighter will be able to replace the equipment, taking into account the assigned tasks - almost on the runway.

Also, Raytheon Technologies Intelligence & Space is considering other issues related to the development, production and operation of promising technology. Not only technical and economic, but also organizational aspects are taken into account. So, work on a new generation of fighters will be carried out in the interests of the Air Force and the Navy, and it must be borne in mind that the requirements of these customers are different. Fulfillment of two different technical assignments should not lead to unjustified complications of the programs. 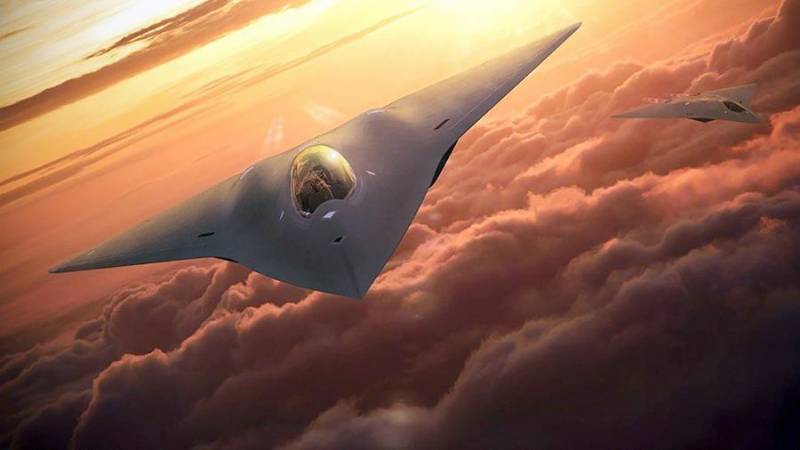 Another FX variant from Lockheed Martin
It is noted that in previous projects and generations, great attention was paid to cost. Due to new methods and technologies, it is proposed to optimize such indicators of technology. In particular, it is possible to create a platform aircraft, which will be completed with one or another instrument at the request of the customer. This will reduce the cost of the serial machine and make it available to a wider range of customers.

The issue of the ability to conduct close air combat remains relevant. Discussions are ongoing, but Rateon is leaning towards the need to provide such opportunities. The emergence of artificial intelligence will lead to new challenges and potential difficulties. It is necessary to ensure the full and safe operation of an AI fighter in the same airspace as civilian transport. At the same time, the AI ​​must be able to fight.

The theme of the next 6th generation fighter has been under development in the United States since the end of the XNUMXs. The first project of this kind was launched at the initiative of the Navy; and a few years later, similar work began in the interests of the Air Force. By the mid-tenths, a certain amount of data was collected, on the basis of which it was later supposed to develop a real project. During this period, all major aircraft manufacturers proposed their concepts for the future fighter. Recently, a similar "project" was shown to the BBC. 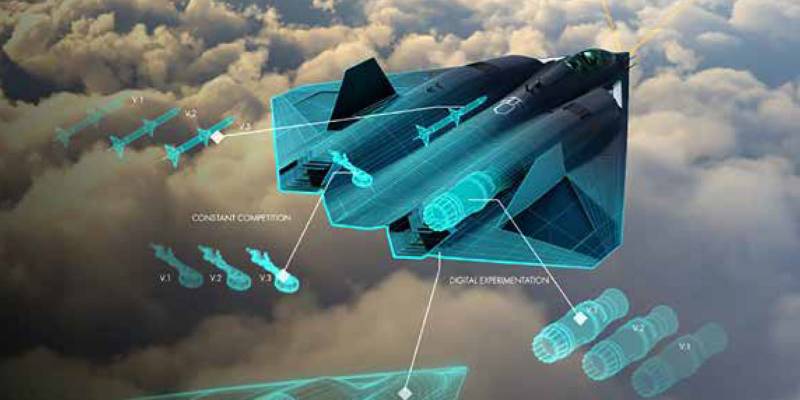 Newest known concept published by the US Air Force
Last year, it was reported that flight tests of the technology demonstrator aircraft were carried out. At the same time, the developer of such a machine, its appearance, characteristics and capabilities were not revealed. According to recent reports, it is planned to build and test a full-fledged prototype in the coming years, and in the second half of the decade they will launch a series. Design has been accelerated through new approaches and techniques.

Whether Raytheon is involved in the creation of a new fighter is unknown. Regardless of the actual participation, it works out the issues of the development of technology and its individual components, as a result of which forecasts and estimates appear. With their help, the company can draw up the necessary plans and join an existing or future development program for a real aircraft.

The announced "predictions" look sound and plausible. They take into account the capabilities and achievements of American industry, as well as trends in the development of modern projects. However, in view of the general secrecy of the directions, it is still impossible to say how much they correspond to the real plans of the Pentagon. Conclusions of this kind can only be drawn in a few years, when program participants publish their first details.