The concept of the anti-aircraft complex "Kilchen" (Ukraine) 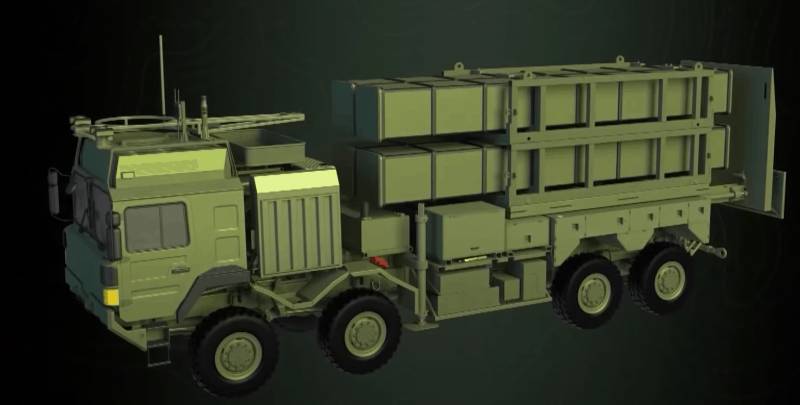 The Ukrainian industry has begun the development of a promising long-range anti-aircraft missile system for use in object air defense. The "Kilchen" project offers a number of interesting solutions and ideas that can positively affect the combat qualities of the complex. However, there is every reason to doubt the possibility of a successful implementation of such a project.

The Kilchen air defense system project is an initiative development of the Yuzhnoye design bureau. Several other companies are also involved in the work. The first materials on this project were published a few days ago and predictably spread across the Ukrainian media, receiving high marks.

It is alleged that the proposal to create a new air defense system appeared two years ago. Then he was presented to the Ministry of Defense of Ukraine and even received a positive decision. However, the real order was never received, and funding was not opened. Probably, after two years of waiting, Yuzhnoye Design Bureau decided to remind about its project.

The development organization has revealed the appearance of a self-propelled launcher and an anti-aircraft missile. The structure of the system in a combat position is shown. Also announced are some characteristics and capabilities. In addition, estimates of an economic and operational nature are provided: such issues are also taken into account at the current stage of the project.

According to the published data, the "Kilchen" system should repeat the main proven solutions in the field of anti-aircraft complexes. At the same time, fundamentally new approaches to the organization of units and to the implementation of management are proposed. Due to this, it is planned to increase the flexibility of the organization of defense and ensure the growth of resilience.

Design Bureau "Yuzhnoye" showed the possible appearance of a self-propelled launcher from the new system - so far in the form of a three-dimensional image. The sketched SPU is "built" on a foreign four-axle chassis. The machine is equipped with a platform with target equipment for various purposes. The main element is a lifting launcher for four transport and launch containers with vertical launch missiles. It is equipped with a gas shield with supports for installation on the ground, which indicates a "hot" method of launching the rocket.

Also shown are several tools of the complex of other types and other purposes. Radars with different missions, command posts, etc. are also self-propelled using different chassis. The use of several radars of different ranges with different functions is envisaged. Due to this, they plan to provide reliable detection and tracking of any targets, including inconspicuous ones.

Shown is a promising missile defense system, both assembled and in the form of an explosion diagram. A single-stage solid-propellant rocket in a cylindrical body with an ogival head fairing is proposed. Outside on the body there are two sets of planes. It is proposed to equip the missile with an active radar homing head and a high-explosive fragmentation warhead with ready-made striking elements. Estimated firing range - 280 km. 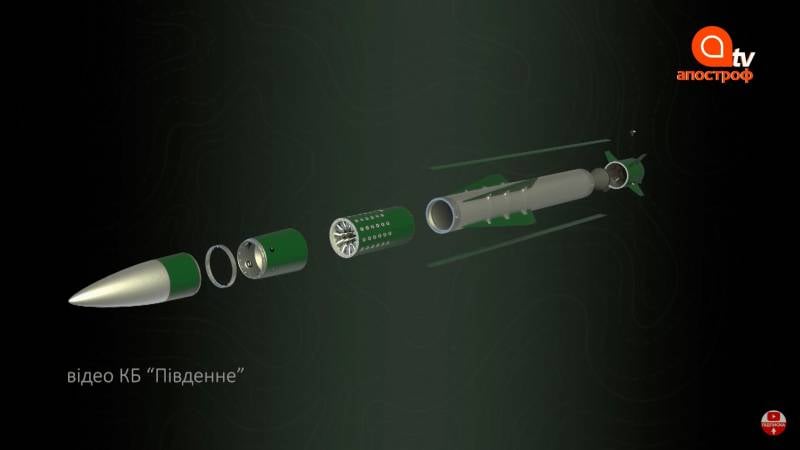 The standard composition of the Kilchen air defense system provides for the use of several radars and command posts, and also includes six combat vehicles with four missiles each. The complex will be able to deal with aerodynamic and ballistic targets. The possibility of simultaneous shelling of 16 aerodynamic targets with the guidance of two missiles at each is declared. It is also possible to attack 12 targets, incl. 6 ballistic. Each ballistic object can be simultaneously attacked by 4 missiles.

The possibility of obtaining an acceptable cost of the complex is declared. It is argued that the "Kilchen" will be three or four times cheaper than the American-made Patriot air defense system. Thus, with the same costs for the purchase of equipment, the air defense will be able to cover a larger front.

The Kilchen project offers several interesting ideas in the field of defense organization and management. It is proposed to use the principles of network centricity and automatic equipment with the possibility of self-learning. First of all, this will reduce the load on the calculation and increase the performance of all system components.

The concept of a "werewolf system" is proposed. The air defense system should not have a constant composition and structure. It is proposed to change them in accordance with the current tasks and needs of the air defense. First of all, this will be implemented by changing the number of launchers on duty under the control of one command post. 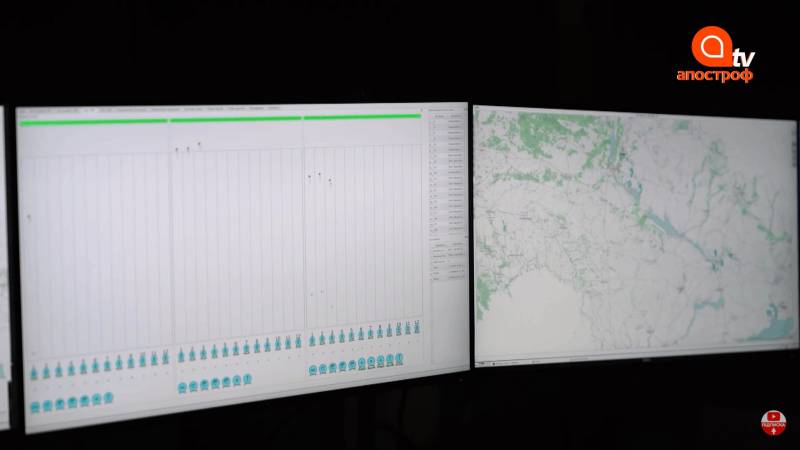 The control loops of the system should be built using “real” command posts and cloud technologies. The authors of the project believe that such a control system will be distinguished by increased stability: it cannot be disabled by traditional methods.

The proposed project of the Kilchen air defense missile system is interesting, at least, for the tasks set. Design Bureau Yuzhnoye plans to create the first Ukrainian long-range anti-aircraft complex, which fully meets the current requirements and compares favorably with the existing foreign designs. The successful implementation of such a project will have obvious positive consequences for the Ukrainian army.

The composition and appearance of the promising complex were formed on the basis of worked out ideas. This is expressed in the use of self-propelled chassis, several radars for different purposes, SPU with vertical launch, etc. At the same time, completely new principles with good potential are being proposed.

However, there are a number of objective problems of various kinds, due to which the Kilchen project runs the risk of remaining at the concept or early design stages. First of all, the prospects for new developments are negatively affected by the general economic, organizational and other problems of modern Ukraine. Because of them, many projects, despite the most daring plans, could not be brought to series and operation. 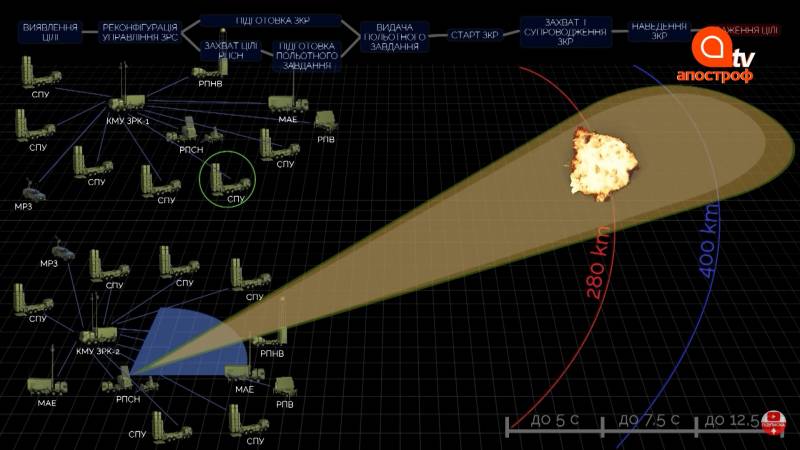 It should be recalled that the Yuzhnoye design bureau has never dealt with anti-aircraft systems. Accordingly, before the necessary experience is gained, various difficulties may arise that will negatively affect the overall course of the project. Related companies may have similar problems. There are also risks in the context of creating cooperation.

With all this, very difficult tasks are set before the Kilchen air defense system. So, at the moment, only a few countries in the world can independently build the entire range of modern air defense systems. The development and production of long-range missiles is also available only to developed countries. Whether Ukraine will be able to enter this "club" is a big question.

The proposed concept of a "cloud" control system is quite interesting and, in theory, really allows you to increase the combat qualities and survivability of the complex. However, this is a fundamentally new idea, which has not yet been implemented even in developed countries. It is unlikely that Ukrainian enterprises with limited experience and modest capabilities will be able to create such systems that fully correspond to the current ambitious plans.

The Yuzhnoye design bureau came up with an initiative to create a promising anti-aircraft complex several years ago and even received the approval of a potential customer - but not financial and organizational support. Such events can be considered a clear hint of the future fate of the Kilchen project. The Ukrainian army shows no real interest in this development - and the completion of the project turns out to be impossible.

The organization-developer is trying to remind about a promising project through the press and it has managed to attract public attention. Perhaps such measures will give the desired result, and the Ministry of Defense will be forced to order and pay for the full development of the project. However, in this case, success is not guaranteed due to design difficulties and due to the likely lack of funding.

Thus, the Kilchen project has every chance to add to the list of failures of the Ukrainian defense industry. Once again, the most daring and interesting ideas are proposed, the implementation of which turns out to be impossible for a number of objective reasons. And this will not be the last such case - there are no prerequisites for a change in the overall negative situation.