A new pandemic will come from Paris 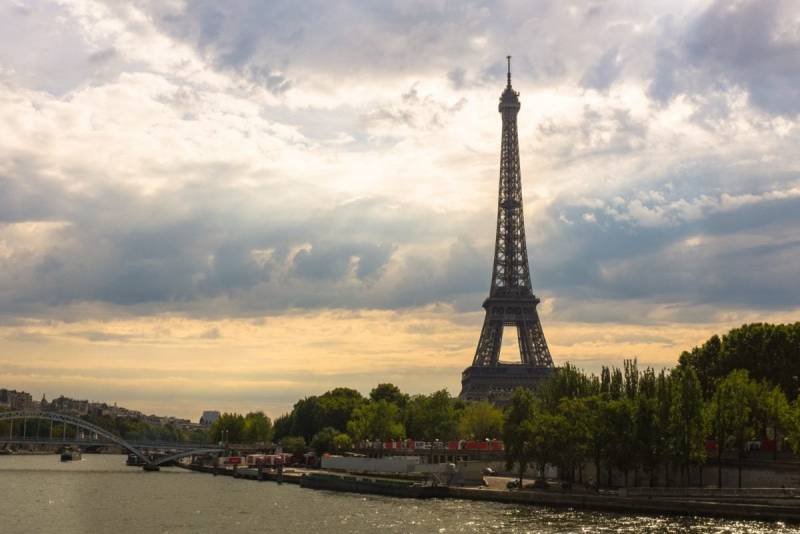 The coronavirus pandemic exacerbates any relationship between people. Moreover, the awareness that this is happening daily, hourly, every minute has already disappeared. We are accustomed to this state and hardly perceive difficulties. In the minds of people, the opinion was strengthened that it had always been so. Humanity quickly forgets not only the bad, but also the good.

Today the press is increasingly discussing the topic of the collapse of one of the pillars of the EU - France. There is already talk about a military coup, about right-wing radicals who can use the security forces to seize power. President Macron is already issuing warnings. The left is almost open about the coup. What is happening in France?

"France is in danger, and our tricolor flag is not just a piece of cloth!"
This is not my slogan. This is the slogan proclaimed in an open letter to President Macron by 20 retired army, police and gendarmerie generals and more than a thousand officers. In order to understand the reason for writing this letter, it is enough to read the title - “Return honor to our rulers". The letter was written in early April this year.

The essence of the letter, in short, boils down to two main points. First, generals and officers are outraged by the government's inaction against radical Islamists and street hooligans. Flirting with radical Islamists and the political correctness of the authorities have led to the fact that Islamists rule on the streets of French cities today. The French are intimidated.

Secondly, the retirees directly hinted to Macron about the possibility of a coup d'etat by the forces of security forces. It sounded rather veiled, but quite understandable. Army, Police and Gendarmerie "ready to serve anyone who will protect the French people". Very similar to the slogans of April 1961 ... Isn't it a mutiny of the generals? ..

And the solidarity of so many officers and generals should really scare Paris. Again by analogy with 1961. Remember Colonel Antoine Argo's Secret Army Organization in Madrid? They were also quite secret, but the riots were prepared not only in Algeria, but also in France.

Voices against the actions of the police against the "yellow vests" are especially often heard. The brutal suppression of the performances of some against the background of connivance on others. To quote the words of the retired French gendarmerie captain Jean-Pierre Fabre-Bernadac:

“You know, France is like a residential building in which a fire starts. And there are firefighters who immediately noticed this and came to the rescue to extinguish the flames. We want to be that kind of firefighter, and the left says: no, you are just pyromaniacs. "
The former gendarme is especially outraged that when the police or the gendarmerie detain criminals from among refugees, an order comes from above to release the detainee, since he still knows little about French law. Even in the Parisian suburbs, whole districts have already appeared, where the police are trying not to meddle. Islamists reign there.

Indignation of the people or the pre-election campaign has begun?

This letter, alas, is true. And one of the properties of truth is inconvenience. In particular, what the officers wrote is very unpleasant for the French government. It is difficult to admit that Islamist refugees in the country are indeed in a special situation. To recognize what already exists, but is not traditional for the French, means that the government is deliberately going to reformat the state.

The easiest way to fight those who raised the topic of Islamization is to accuse them of this very reformatisation. Simply put, accuse of preparing a coup d'état. Moreover, this letter appeared 10 days before the next anniversary of the mutiny (April 21, 1961). As you can see, this year marks a certain anniversary of this event - 60 years. What an excellent ground for creating the image of the putschists.

The government responded to the accusation of losing the French state soon by accusing exactly the same of those who signed the letter. There are already opinions in parliament that the letter is nothing more than a call for an uprising. Moreover, this opinion is expressed not only by government officials, but also by deputies.

Left-wing parties took the side of the existing government. In response, support for the officers was predictably expressed by the right. Marine Le Pen, deputy of the French National Assembly, leader of the National Front party, openly supported the letter:

"... I share their concerns, share their statements, and I believe that these problems are being solved politically, by a political project, which the French must approve, of course, within the framework of a democratic procedure."
I am sure that such a statement by Le Pen has really increased the vote in future elections. It is possible to win elections on popular indignation. Moreover, today this indignation is already spreading not only to the president and his team, but also to deputies of all levels.

People see that the laws, those decisions that are being made today do not solve problems. This is more of a farce than laws that really work. Tolerance and the desire to look good for all some MPs and officials lead to the emasculation of laws. Good on the first reading, they become completely useless on the last reading.

Remember January 2015? Demonstrations across Europe wearing "I am Charlie Hebdo" T-shirts? Then, when the Islamists killed 12 people in the editorial office of this publication? Do you remember October 2020? When, at the College Bois-d'Aulne in Conflans-Saint-Honorine (department of Yvelines, near Paris), an Islamic terrorist killed and beheaded a history teacher who was showing his students caricatures of the Prophet Muhammad?

And how did the French state react? In theory, decisions have been made, but in fact? Can girls in Marseille wear mini skirts? In the suburbs of Paris, can you safely walk without risking running into a gang of Arabs? And so throughout France. The problem of security has become a state problem today. And the people feel it.

The boiler boils and may explode at any moment.

Today, many Western publications are trying to convince the French, and Europeans in general, that nothing terrible is happening. That the situation is under control and the government at any time can extinguish any speech. Whoever organized it. At the same time, they are trying to convince people that the military do not know how to think strategically.

But here's an example of such strategic thinking. Former Interior Minister Gerard Colombes, 2018. This is an excerpt from an interview with one of the French publications:

“- How do you assess the security situation in France?
- She worries me very much. What I read in the police reports every morning reflects a very pessimistic situation. Relationships between people are very difficult, they do not want to live together.
- What part of the responsibility lies with immigration?
- Huge.
- How long do we have until it's too late?
- I do not want to scare, but I think that time is short.
- How many?
- It is difficult to assess, but I would say that in five years the situation will already become irreversible. Yes, we have 5-6 years to avoid the worst, and then ... "
Three years have passed. You can evaluate the analysis today. The last conclusion remains. It is clear that then, in 2018, Gerard Colombes could not speak directly about the possibility of a civil war. But what prevents us from doing this today? The irreversible situation predicted by the former minister is a civil war. War on ethnic and religious grounds.

It was not for nothing that French Defense Minister Florence Parly launched threats against Marine Le Pen, retired officers and generals, and active officers of the army, police and gendarmerie. The advice of Mrs. Minister is very indicative: “Shut up and keep your opinion to yourself!»You can add about a boat that cannot be rocked.

It is, of course, true, but if this boat is like Abramovich's yacht, for example, then it is difficult to swing it. The weight categories of a person and such a boat are too different. But until recently France was exactly the same “Abramovich's boat”. Five or six years ago, even a conversation about the possibility of a civil war in Paris would have caused nothing but laughter.

There are symptoms, it remains to determine the disease

What we are seeing today in Western Europe, including France, causes some concern. France is not Ukraine. This is one of the pillars of the EU. And the riots in France will automatically spread to all European countries. Problems with refugees are not problems of one country, they are problems of Europe as a whole.

Europeans still have little understanding of the dangers of Islamic radicals. They live in the past. They are confident that if today the European population demands the restoration of the rule of law and relations between people, which were before the first wave of refugees, then governments can easily pass the necessary laws and the situation will stabilize.

But as recent performances by blacks and colors in the United States have shown, this is not the case. If the speeches of the blacks in the United States were led by a truly determined politician, the riots would quickly turn into a serious confrontation. And I'm not sure White would have won. We are witnessing exactly the same confrontation now in Europe between Islamists and Europeans. A "fat" European and a "thin and hungry" refugee ...

There is no need to hope and gloat about this. We are also part of Europe. This means that Europe's illness may well pass to us. Is it a pandemic again? A pandemic of a new global disease? Quarantine again? Only now, masks, if this pandemic begins, will no longer be saved. And good soap too. It remains to be hoped that the "French disease" will be localized in France ...