"Glory will not perish!" Heroic Defense of Dorostol 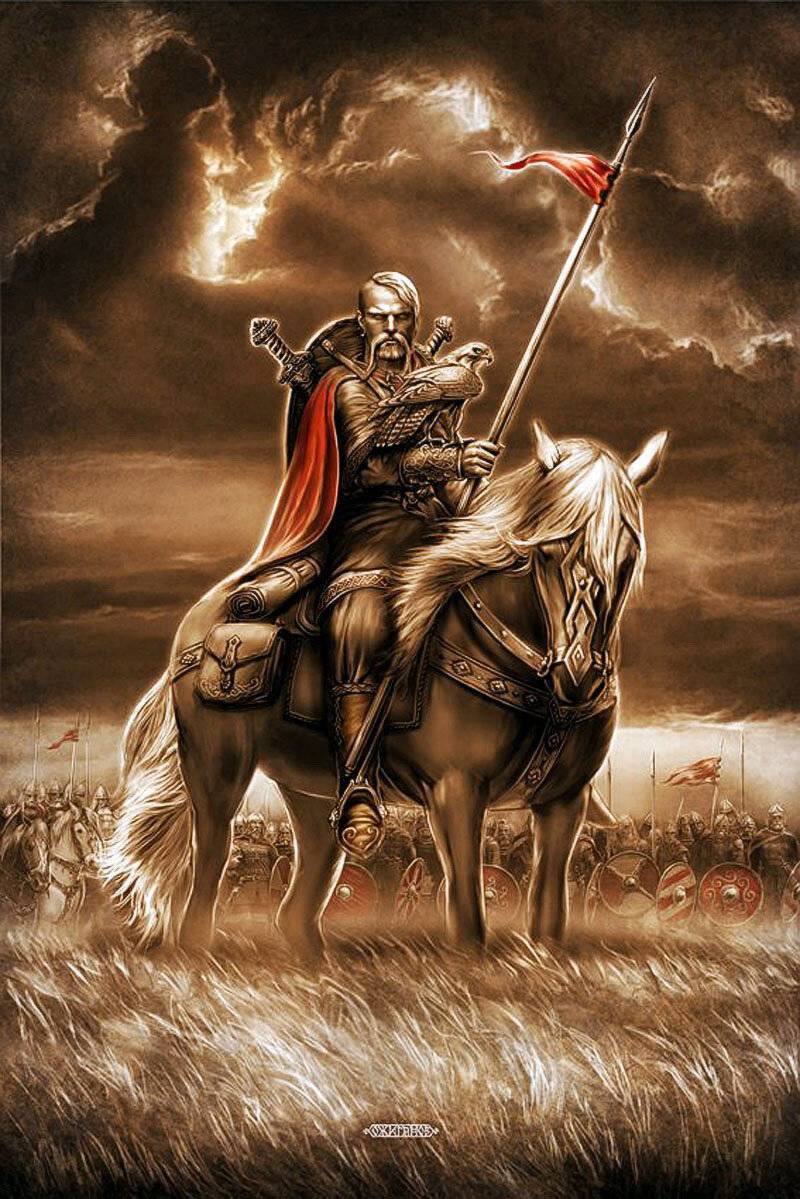 The siege of Dorostol dragged on until July 971. Neither the Emperor Tzimiskes nor Svyatoslav were able to achieve a quick victory. The Greeks, despite the surprise of the attack and the great numerical superiority, were unable to crush the Russian squads. Tzimiskes also failed to force the Russians to lay down weapon... The Russian prince was unable to defeat the Byzantine army in a number of battles. Affected by the lack of reserves and the almost complete absence of cavalry. The Russian foot "wall" covered all the attacks of the enemy infantry and cavalry, but could not launch a counteroffensive. The Greeks had a powerful cavalry, which thwarted the attempts of the Russians to go on the offensive.

The Greeks noted the high fighting spirit of the Rus throughout the entire siege. The Romans were able to fill the moat and bring their stone-throwing machines closer to the walls. Rus and Bulgarians suffered heavy losses from their actions. However, they fought steadily and bravely for three months, holding back a powerful enemy. The Byzantines noted that the Russian "barbarians" prefer to kill themselves rather than be captured.

Gradually, day after day, the Greeks destroyed the walls and ramparts of Dorostol with the help of battering and stone-throwing machines. The Russian-Bulgarian garrison was thinning, there were many wounded among the soldiers. There was a severe shortage of food. The guards boiled the last horses in the cauldrons, emaciated and weakened.

However, the situation was difficult not only for Svyatoslav, but also for Tzimiskes. He hoped for a quick and triumphant victory that would strengthen his position in the empire. But the siege dragged on, the Rus held out, the Greeks suffered heavy losses. There was a threat that Svyatoslav's soldiers would be able to take over in one of the fierce battles, or help from Russia would come to them. It was restless in the rear. In the Byzantine Empire, there were constant rebellions. To know, taking advantage of the absence of the basileus in the capital, she wove intrigues and arranged conspiracies. The brother of the Emperor Nicephorus Phocas, killed by Tzimiskes, Lev Kuropalat rebelled. The palace coup failed, but the anxiety remained. The next conspiracy could be more successful.

Svyatoslav decided that the time had come for a new decisive battle. On July 19, 971, the Russians made a great sortie. She became unexpected for the enemy. Attacks usually took place at night. The Russians attacked at noon, in the afternoon, when the Greeks were resting and sleeping. They destroyed and burned many siege engines. The head of the siege park, a relative of the emperor, Master John Curkuas, was also killed. Then the Greeks whispered that Master John was punished for his crimes against Christian churches. He plundered many temples in Mizia (as the Greeks called Bulgaria), considering the Bulgarians to be almost pagans, and melted precious vessels and bowls into ingots. 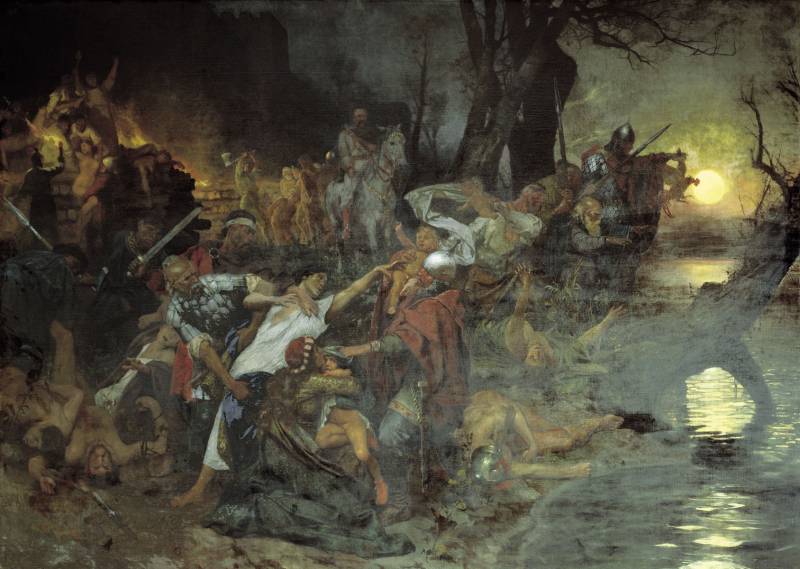 On July 20, 971, the Russians again went into the field, but in large forces. The Greeks also built their forces. The battle began. In this battle, according to the Greeks, one of the closest associates of Svyatoslav, the governor of Ikmor, died. Even among the Russian Scythians, he stood out for his gigantic stature and cut down many Romans. He was killed by one of the bodyguards of the Basileus Anemas. The death of one of the big voivods, and even on the Day of Perun (the Russian thunderer, the patron saint of warriors, confused the Russians. The army retreated outside the city walls.

The Rus, burying their fallen, arranged a funeral feast. Memorial feast. It included washing the body, dressing in the best clothes, ornaments. Ritual feast, fun and burning of the deceased (steal). Interestingly, the Greeks noted the unity of funeral customs (one of the most important in human life) of the Scythians and the Rus. Also Leo the Deacon reported on the Scythian origin of the ancient hero Achilles. The Rus-Scythians contemporary to the Deacon have preserved ancient traditions. Actually, this is not surprising, because the Rus are direct descendants of the ancient Scythians-Sarmatians and earlier - the Aryans-Hyperboreans. Heirs of the most ancient northern tradition and civilization. All its basic and sacred symbols.

On July 21, Svyatoslav Igorevich convened a military council. He asked his people what to do.

Some commanders suggested leaving, secretly immerse themselves on boats at night. Since it is impossible to continue the war: the best fighters were killed or wounded. You could also pave your way by force, abandon the city, break into the forests and mountains of Bulgaria, find support from local residents who are dissatisfied with the policy of the boyars and Greeks.

Others suggested making peace with the Greeks, because it would be difficult to get away secretly, and the Greek fire-carrying ships could burn the boats. Then Svyatoslav made a speech delivered by Leo the Deacon:

“The glory perished, which followed the army of the Rus, who easily defeated the neighboring peoples and enslaved whole countries without bloodshed, if we now shamefully retreat before the Romans. So, let’s feel the courage that our ancestors have bequeathed to us, remember that the power of the Rus was still indestructible, and we will fight bitterly for our lives. It is not for us to return to our homeland, fleeing; we must either win and stay alive, or die with glory, having accomplished feats worthy of valiant men! ”
"Glory will not perish!"
- assured the governors of the prince. And they vowed to lay down their heads, but not to shame the glory of the Russian.

Then all the soldiers took the oath, and the Magi sealed the oaths with sacrifices. On July 22, the Russians went out into the field again. The prince ordered to close the gate so that no one could return behind the walls. The Rus themselves struck at the Greeks, and their attack was so fierce that the enemy wavered and began to gradually withdraw. Svyatoslav himself cut into the enemy ranks like a simple warrior. Seeing that his phalanx was retreating, the Byzantine emperor led the "immortals" into battle. On the flanks of the Russian army, the enemy armored cavalry struck. This halted the onslaught of the "barbarians", but the Rus continued the attack, regardless of the losses. The Deacon called their onslaught "monstrous." Both sides suffered heavy casualties, but the bloody battle continued.

As the Christians themselves later recalled, they were literally saved by a miracle. Suddenly, a strong thunderstorm began, a strong wind rose. Clouds of sand hit the Russian soldiers in the face. Then a downpour poured down. The Russians had to hide behind the walls of the city. The Greeks attributed the riot of the elements to divine intercession. 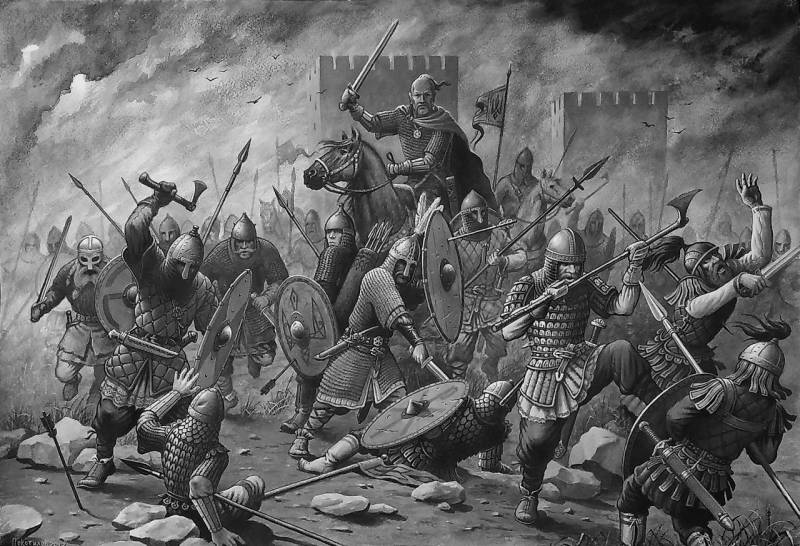 Tzimisce, shaken by the battle and fearing a new battle or bad News from the capital, if the siege is continued, he secretly offered peace to Svyatoslav. According to the Greek version, the world was proposed by Svyatoslav. Basilevs insisted that the Russians themselves come up with peace proposals. Tzimiskes considered it a belittling of his honor to seek peace himself. He wanted to appear victorious to Byzantium. Svyatoslav satisfied his vanity. Sveneld with his retinue arrived at the Byzantine camp and conveyed the offer of peace.

The two rulers met on the Danube and negotiated peace. Lev Deacon left a description of the Russian prince:

“Svyatoslav arrived on the river by boat. He sat on the oars and rowed with his warriors, no different from them. The Grand Duke looked like this: of medium height, neither too tall nor too small, with thick eyebrows, blue eyes, an even nose, a shaved head and a thick long mustache. His head was completely naked, and only on one side of it hung a lock of hair, which signified the nobility of the family. He had a strong neck and broad shoulders, and his entire physique was rather slender. He looked gloomy and stern. In one ear he had a gold earring adorned with two pearls with a ruby ​​inserted between them. His clothes were white, and in nothing but cleanliness, they did not differ from the clothes of others. "
The Greeks let the soldiers of Svyatoslav on the Danube. They gave bread for the journey. Greek sources reported that the Russians took bread for 22 thousand soldiers. The Russian prince agreed to leave the Danube. The Russians left Dorostol. All the prisoners were given to the Romans. Russia and Byzantium returned to the articles of agreements 907-944. The parties again considered themselves "friends". This meant that Constantinople was again paying tribute to Russia. This was also reported in the Russian chronicle. Also, Tzimiskes had to send ambassadors to the Pechenegs so that they would clear the way.

Thus, Svyatoslav Igorevich escaped a military defeat. The world was honorable. Byzantium was again considered a "partner" and paid tribute. However, Bulgaria, for which the Russian prince had big plans, had to be abandoned and Byzantine rule was established there. Therefore, Svyatoslav wanted to continue the dispute over the Danube lands, which had long belonged to the Slavic Russians. According to The Tale of Bygone Years, the prince said:

"I will go to Russia, I will bring more squads."
Svyatoslav sent Sveneld to Kiev with a large part of the army, she walked overland. Himself with a small retinue remained on the Beloberezhye, on the island of the Danube delta, and spent the winter there. The prince was waiting for the arrival of a new large army from Russia in order to continue the battle in Bulgaria.

And hard times have come for Bulgaria. Eastern Bulgaria was deprived of its independence. Roman garrisons were located in the cities. Tsar Boris was deposed, he was ordered to lay down the royal regalia. His younger brother, Roman, was emasculated so that he would not have children. Bulgarian cities were renamed in the Greek way. Pereslav became Ioannopolis, in honor of Basileus, Dorostol - Theodoropolis, in honor of his wife. 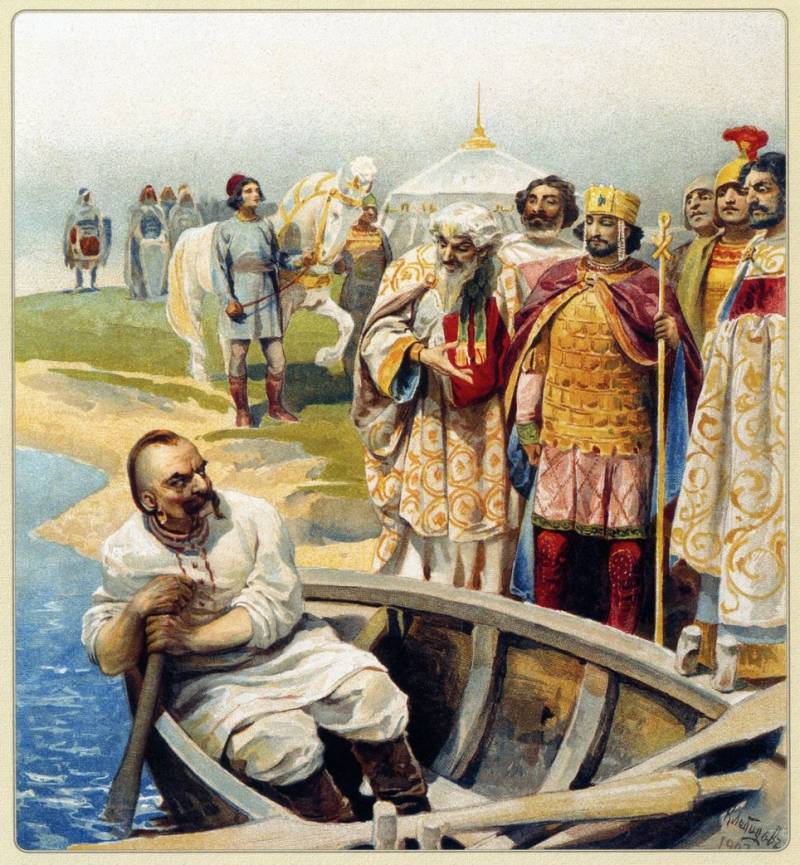 "Meeting of Svyatoslav with the Byzantine emperor Tzimiskes on the banks of the Danube." K.V. Lebedev, 1880s

Ctrl Enter
Noticed oshЫbku Highlight text and press. Ctrl + Enter
We are
"Glory, a companion of Russian weapons, will perish if we now shamefully yield to the Romans"War Svyatoslav with Byzantium. Battle for Preslav and the heroic defense of Dorostol
Military Reviewin Yandex News
Military Reviewin Google News
7 comments
Information
Dear reader, to leave comments on the publication, you must sign in.