As you know, the greatness of a state is hidden not only in military capabilities and economic power.

Both a superpower and a power are a state mechanism capable of being active and winning in conditions systemic competition.

Activity, of course, is a tool for promoting the interests of the country. The arsenal of funds can be incredibly huge: it can be cultural and religious influence, humanitarian and military operations, economic operations, diplomatic confrontation, and so on.

In essence, in order to establish and maintain the status of a power, the state needs to use absolutely all of its available resources - otherwise, having achieved success in a certain field, it will soon be unable to operate in the conditions of the above-mentioned systemic competition.

It would be a mistake to say that China does not understand this.

Unfortunately, in the Russian information field, extremely little attention is paid to modern political processes and the latest trends - some elements sometimes break out of the general picture, which do not allow considering the situation as a whole.

The People's Republic of China is no exception in this regard - despite the mass of scattered and superficial information, we practically do not receive up-to-date data on the actions and political strategy of Beijing.

Meanwhile, Chinese foreign policy in recent years has been an interesting topic to consider.

In a relatively recent historical past, Chinese diplomacy and the activities of the PRC Ministry of Foreign Affairs were extremely restrained, benevolent, calm and, perhaps, even meek.

These epithets are perhaps the best suited to describe the work of the "old Beijing school."

Of course, this has a number of logical and understandable explanations - for a rather long time, China diligently concealed its growing foreign policy ambitions and actively acted in the field of non-violent seizure and the formation of new sales markets.

This policy of "meekness and respectfulness" helped to establish China as a new superpower, contrary to the logic of strategy. Beijing obligingly provided all of its modest resources for Washington since the Cold War, and successfully continued this practice after its end, which made it possible to attract a massive inflow of investments, production lines and advanced technologies to China (the process of "pumping up" the Chinese economy began back in 80s - the United States carried out it, thereby increasing the urgency of the "eastern threat" for the USSR. China, in turn, successfully provided it, including supplying weapons and military specialists of the mujahideen in Afghanistan).

The PRC did not feel confident enough even in the late 2000s - despite the "economic boom", the active construction of land and naval forces, as well as the emergence of China as a "world factory", the policy continued to go the same way.

This, of course, only had a positive effect on the growth of Beijing's expansion - a soft policy, a "cultural boom" (China in those years began a very interesting promotion of its stories and cultures around the world - in particular, through cinematography), vast economic influence and the formation of a mass of levers of non-military influence led to the emergence of the thesis that "China took over the world."

One way or another, such a vector of development has ceased to correspond to the growing appetites of Beijing. The leadership of the Communist Party has embarked on an aggressive international policy, putting a bold cross on many of the results achieved earlier.

It would be fair to say that such an unusual name "diplomacy of the wolf-warrior" has received a new character in the development of diplomacy and foreign policy of the PRC only relatively recently. It took shape as a stable trend at the turn of 2019-2020, finally establishing itself at the first stage of the coronavirus epidemic.

The prerequisites for this, of course, existed before. Beijing has been actively building up its aggressive rhetoric, presumably since 2012, when Xi Jinping became General Secretary of the Central Committee of the Chinese Communist Party.

It is noteworthy that in our expert environment this phenomenon has passed almost unnoticed - moreover, such changes in Chinese policy, perhaps, were even denied.

"If it seems to modern experts that the current policy of the PRC has become fundamentally or strategically different, then this is not so, which we note, referring to the materials of the last party congress."
- G.V. Sachko, 2014. “Bulletin of the Chelyabinsk State University. Political science. Oriental studies ".

Of course, the change in Chinese policy is not directly related to the decisions of Xi Jinping - the Chinese political culture and its system are based on the "majority decision", and individuals do not play any significant role. Xi Jinping serves as an iconic figure reflecting an era of change.

Naturally, these changes have occurred for a reason. 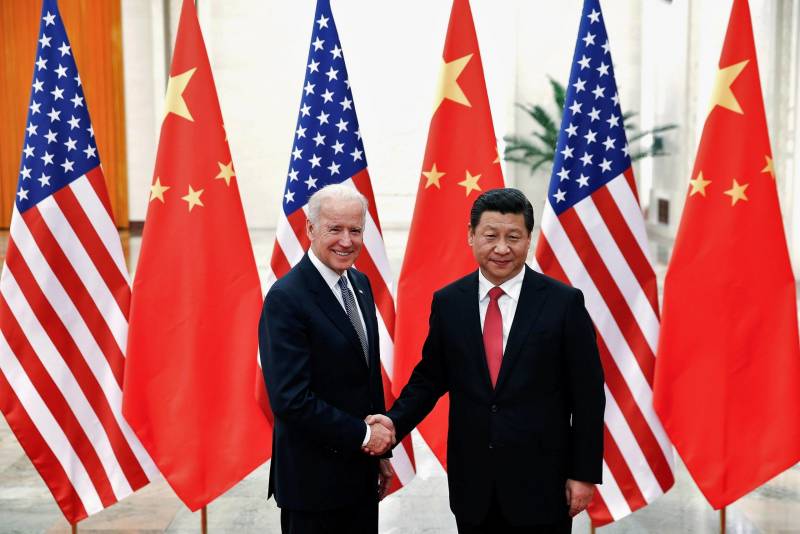 Despite numerous statements that Western countries, including the United States, allegedly "missed the formation of a new superpower," nothing of the kind actually happened.

At the time of the 2000s, it was impossible to stop the launched flywheel of Chinese economic power - by 2008-2010 it became clear that the pace of expansion carried out by the PRC would grow inexorably, which would naturally put in a critical position not only the superpower in the person of the United States, but also regional powers on all continents.

The process of the so-called "Arab Spring" launched in the following years became the starting point of the strategic opposition to the Chinese expansion.

Despite all the hard-hitting details of what was happening, such crude methods were justified - China, despite the growth of economic power, had to rely on marginalized regimes and weak, underdeveloped states. The Arab Spring processes and the subsequent rise of Turkey de facto undermined the growing Chinese influence in the Middle East and North Africa, leaving only Iran in Beijing's “deck” - but this, however, is too broad a topic for conversation, and it requires a separate article.

Naturally, the political situation in China changed at about the same time.

With the appointment of Xi Jinping, the PRC began vigorous efforts to unleash numerous territorial disputes through an extremely aggressive diplomatic campaign. The "heavy hand" of the new policy was also felt by Africa, in which China began to wield, using strong economic pressure.

Simultaneously with the appearance of a new General Secretary of the CPC Central Committee, reshuffles began in the Ministry of Foreign Affairs - within about five years, diplomats of the "old school" were replaced by "wolf warriors."

You are probably surprised by this name, right? With the clever presentation of Western journalists, the new diplomatic strategy of the CCP got it after the name of the Chinese blockbuster, an analogue of the cult movie "Rambo". The plot of the eastern analogue is rather straightforward, but the message is clear - a brave soldier of the PLA MTR fights against the American special forces and mercenaries of capitalism - and, of course, wins.

In a word, this name reflects well the essence of the subject.

"Insulting the Sentiments of the Chinese People"

Of course, one cannot say that China is waging an exclusively diplomatic struggle - it would be more correct to call what is happening a full-fledged information war, one of the key elements of which is diplomats.

Deng Xiaoping, the architect of key Chinese reforms, bequeathed to the future government to be circumspect, stay in the dark, and hide China's strength - but his successors chose a different strategy.

The aggressive rhetoric of the new leadership affected absolutely all spheres of the life of Chinese society, domestic and foreign policy. The PRC unilaterally proclaimed itself a superpower and began to advance its interests mainly by force.

At the moment, it is difficult to predict exactly how the current situation is perceived by the leadership of the Communist Party and the relevant analytical departments of the government. One thing is clear - the PRC began its march around the world, relying on the erroneous thesis that China is on the rise, and the West is heading towards inevitable decline.

In 2012, a flywheel of territorial claims was launched, with which all nearby countries began to literally crumble: Japan, Taiwan, the Philippines, Vietnam, South Korea.

At the same time, the activity of the Chinese press began to grow in the best traditions of doublethink and communist propaganda - the popular political phrase became the central thesis in the style of "argument to the people" (argumentum ad populum - a kind of deliberately logically erroneous argumentation based on the opinion that the majority was right) "Insulting the feelings of the Chinese people."

Literally everyone, from Mexico to the Vatican, was under the informational and diplomatic blow from Beijing. Since then, almost no incident in the world has been encountered by the Chinese side in any other way than "insulting the feelings of 1,3 billion people."

Despite the Chinese "herbivorousness" attributed by our media, the Beijing "wolves" obviously do not suffer from it - sanctions packages are also actively used (yes, this is by no means American know-how - the PRC regularly uses them for political blackmail), absurd accusations , public threats and even kidnapping of citizens of other countries (naturally, only those who dared to "offend the feelings of the Chinese people" - or rather, the Communist Party). 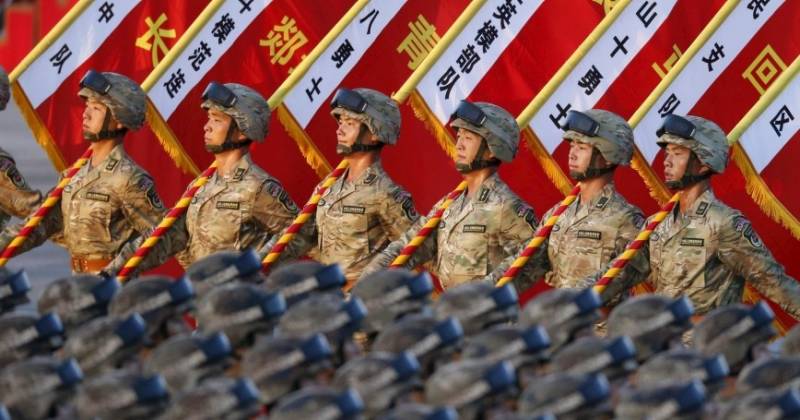 A typical example is the story of Lou Shaie, the Chinese ambassador in Paris. Despite neutral relations with France, the ambassador saw it as a great idea to start spreading, in the midst of the coronavirus crisis, statements that the French government had given up helping its elderly citizens in difficult times, leaving them "to die of hunger and disease."

There is not a grain of truth in such a statement, but it successfully achieved its goal - it created tension. And China regularly uses this tactic even in countries with which it is in neutral (as in the case of France, whose president not long before that advocated the need for cooperation between Europe and China), and in friendly relations.

"Critics in Caracas should put on a mask and shut up."
- the official response of the Chinese embassy to the "socialist allies" from Venezuela during the coronavirus epidemic.

Beijing's attention is enough for everyone - at various times, statements by Chinese diplomats not only in Europe, North America and Australia, but even in such exotic countries as Kazakhstan, Iran, Pakistan, Brazil and Singapore caused a slight shock.

It is difficult to say what exactly the PRC is guided by in promoting such unconstructive methods of dialogue. China is increasingly resorting to inadequate force and propaganda, but less and less achieves its goals, simultaneously destroying all the previously built levers of "soft power". In some ways, this is reminiscent of Japan, which in the course of World War II planned to break the "weak American morale." Beijing uses similar theses in its strategic logic, but in a similar way is facing increasing resistance.