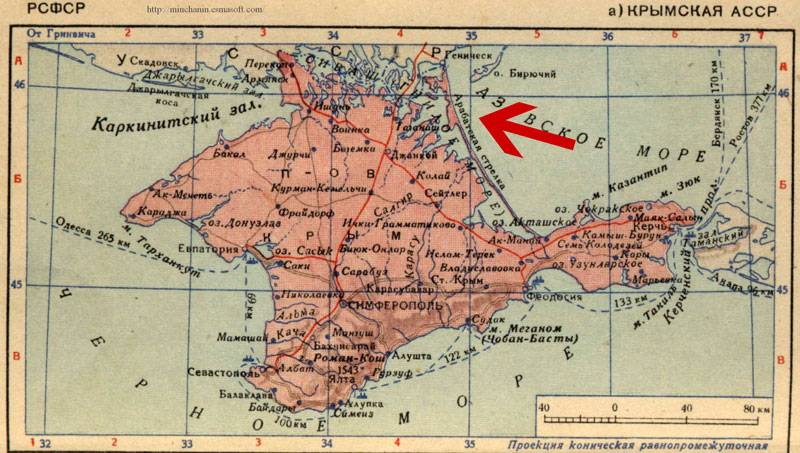 Found a scythe on the sea

"Arabat arrow" - this narrow waterless spit, separating the Sivash from the Sea of ​​Azov, literally wedges into the Crimea. It is no coincidence that in 1920, the divisions of the Red Army marched along it to the peninsula, and during the Great Patriotic War, both the Germans and we used it during the offensive.

The length of the arrow that cut through the Azov, forming the so-called Rotten Sea, is about 120 km. The arrow has always been considered part of the Crimea, specifically the Azov region, but it is divided into two almost equal parts - now Ukrainian and Russian.

It is because of the “arrow” that Crimea, from the northeast, is literally in a kind of semi-embrace of “independent” Ukraine. Exactly half the length of the arrow - its northern and almost the entire central part (Strelkovsky and Schastlivtsevsky districts) - belong to Ukraine. 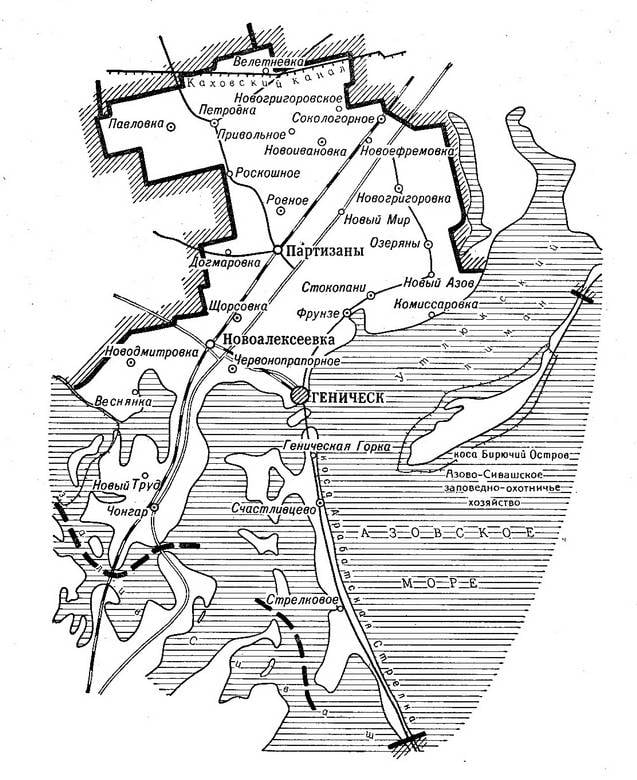 A direct consequence of the division, already very long ago, has become the current maximum strategic vulnerability of Crimea. In case of various kinds of conflicts with Kiev, it remains a serious problem.

Although everything happened quite a long time ago, more precisely, exactly one year after the transfer of the Crimean region from the RSFSR to the Ukrainian SSR - in March 1955. Before that, the entire territory of the arrow was quite logically part of the administrative structure of the peninsula.

Now it may well be that the "circumcision" was carried out with a distant aim: what if the region will return to Russia? In this case, Ukraine was given the opportunity to secure low-vulnerable borders near the remote eastern Crimean coast.

We were unable to obtain any original copy of the legal decision on the arrow of those years, but its text is given in a number of books and magazines. Therefore, we will simply quote here the key lines from the corresponding decree:

"Decree of the Presidium of the Supreme Soviet of the Ukrainian SSR" On the transfer of the Strelkovsky and Schastlivtsevsky village councils of the Crimean region to the Kherson region. "

D. Korotchenko
Chairman of the Presidium of the Supreme Soviet of the Ukrainian SSR

V. Nizhnik
Secretary of the Presidium of the Supreme Soviet of the Ukrainian SSR

Arrow on the map

Agree, a very peculiar term was used for such serious territorial changes - "list". What is more characteristic: back in November 1952, the Presidium of the Supreme Soviet of the Ukrainian SSR, on the "recommendation" of the Presidium of the Central Committee of the CPSU, prepared a draft resolution on the transfer of the city and port of Genichesk to the Crimean region of the RSFSR. 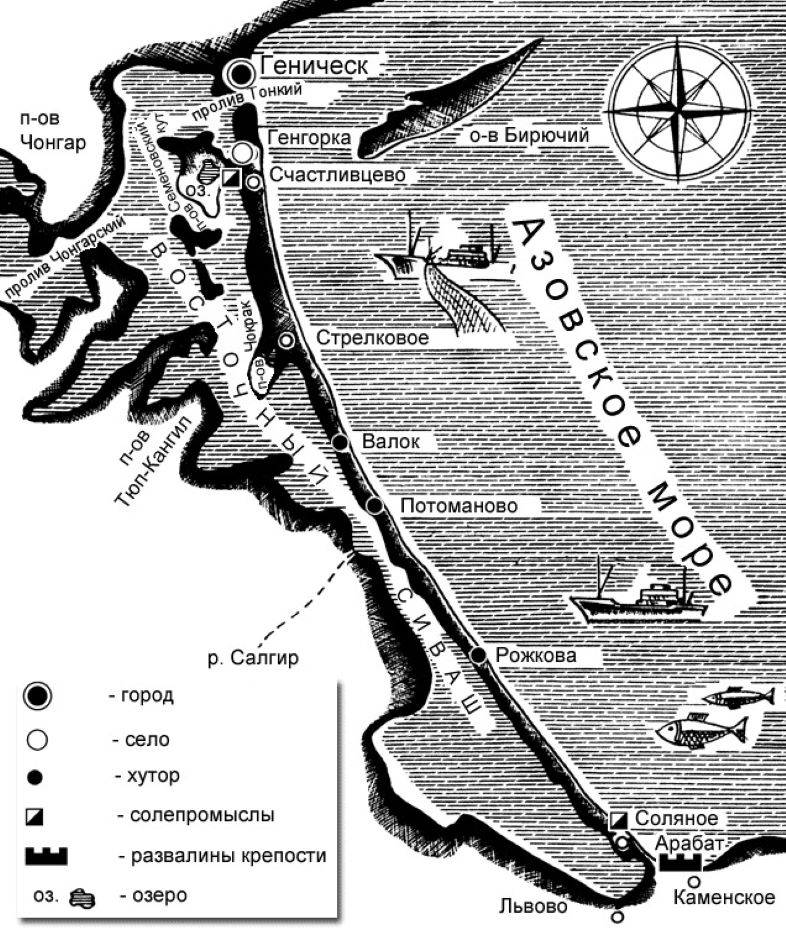 At that time, they understood its inextricable connection with the peninsula and made sure that it was in the Crimea. In Moscow, it was quite objectively believed that, firstly, Genichesk was historically focused on economic and cultural ties with the Crimea, and not with the Kherson region.

In addition, the Azov Crimea had to have its own port, otherwise the entire east of the peninsula is doomed to long-term vegetation. But ... Stalin soon died, the issue was hushed up, and Genichesk remained and still remains a part of the Kherson region of Ukraine.

The city and its environs - fertile and very beautiful lands are separated by a narrow strait from the Arabat spit. The length of this strait is only about 4 km, and the width is no more than 135 m.

The need to “write down” and not “list” Genichesk to Crimea is even confirmed historically. For example, by the fact that Genichesk is designated as part of the Crimea on the "Map of the Crimean Khanate and the Waters Washing It", compiled in 1562 by the Briton Anthony Jenkinson.

In addition, Genichesk - with its transfer to the Crimean region of the RSFSR - was planned to be renamed into Ust-Azovsk. Since in translation from Turkic and Nogai, the former name means, respectively, “thin water” and “new thin (...)”: in both versions, it means a fortress or port in a narrow strait between the Sivash and the Sea of ​​Azov.

But the Ukrainian authorities were able to ignore the Stalinist project to unite Genichesk with Crimea. Moreover, since the second half of 1953, the Crimean region began to prepare for the re-subordination of the Ukrainian SSR. That is why the Ukrainian Crimea did not "need" Ust-Azovsk ...

This map in 1590 was included in the first global geographic atlas "The Spectacle of the Earthly World" by the Flemish cartographer Abraham Ortelius. The same was indicated in 1687 by the map of the Crimean Khanate of the German geographer Yokhim Sandrart.

As for the Arabat arrow, from March 15 to December 2014 inclusive - a part of this arrow (northern and 70% central), not part of the Crimea, it was controlled by Russia. Which, of course, strengthened the security of the Crimea.

In a broader context, the position of “Genichesk and the entire arrow in Crimea” would allow the restoration of a legally legitimate and natural geographically border in the northeast of Russian Crimea. And within this border there has always been - both in the Crimean Khanate, and before its creation - exactly the entire Arabat arrow.

But it did not happen: it seems that under external pressure, since January 2015, the Russian-Ukrainian border on the same isthmus has been restored the same as it has become here - between the “fraternal” republics since March 3, 1955.

Genichesk historically, since the times of the Crimean Khanate (XIII-XVIII centuries), is closely connected with the economy of the Crimea. For centuries, the Genichesky port accounted for about a third of the Crimean foreign trade. And then, and later, Genichesk, due to its location, was considered an outpost blocking the Crimean Sivash and northeastern Crimea from external aggression.

Such a role of Genichesk during the Soviet period was manifested, for example, in the fact that freight traffic between the Crimea and the Ukrainian SSR in the 30s and in 1946-1955. more than a quarter were carried out through Genichesk. It is also characteristic that Genichesk, from the 60s to the present, is supplied with gas from the north of Crimea.

Is it any wonder that in 2016–2017. due to the “gas famine” in the Kherson region of Ukraine, supplies of this gas to Genichesk were increased by almost half. Unofficial trade between Ukraine and Crimea continues today, despite barriers, bans and provocations. And these deliveries are carried out mainly through Genichesk. 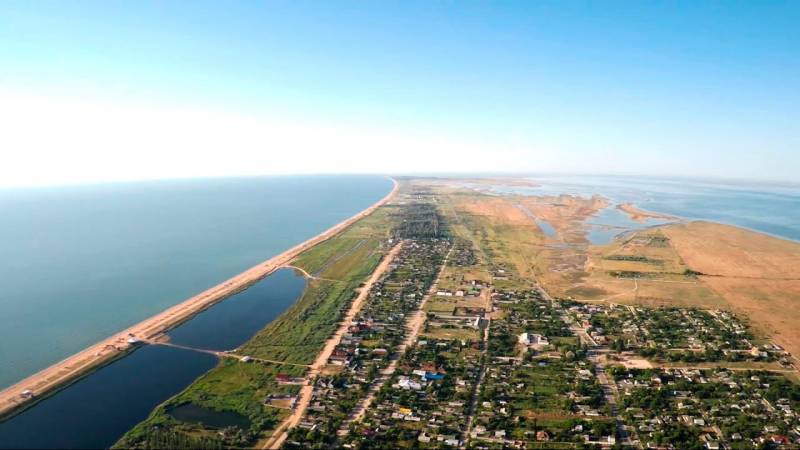 Is it worth it to prove that this was done to strengthen both internal and external economic ties of the peninsula. But later, after about a hundred years, this road was abandoned by the authorities of the Ukrainian SSR, and at the end of the 90s of the last century, in general, they were dismantled. Not otherwise - to "distance" Genichesk from the Crimea.

The proposals of Ukrainian experts to extend this artery along the Arabat Spit to the Vladislavovka-Kerch railway were rejected by the authorities for the same reason. And with the same purpose: the northern part of the arrow adjacent to Genichesk was transferred from the Crimea to the Kherson region on March 3, 1955 ... 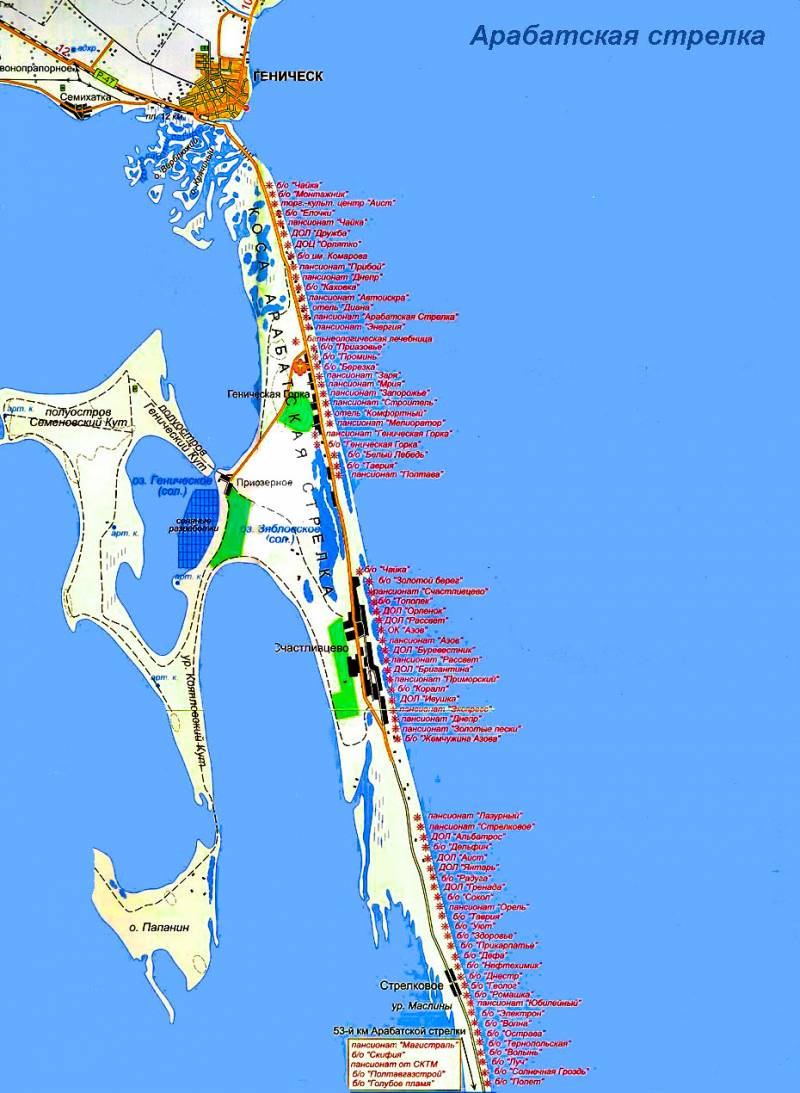 And today Genichesk, not paying attention to the constant reminders of the occupation, gravitates towards the Crimea - there is nowhere to go. Only in Crimea can you earn good money by selling what is grown and produced in Genichesk and its Ukrainian environs. But this is a completely separate topic.