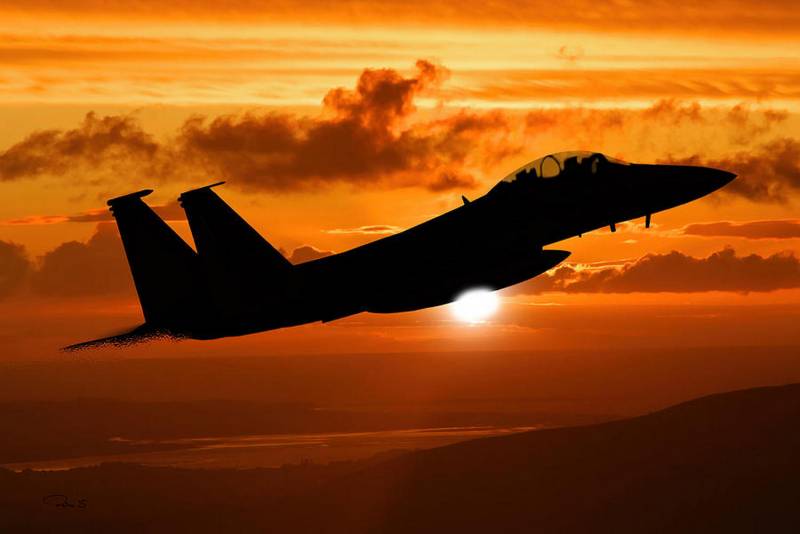 On April 7, 2021, the official presentation and ceremony of transferring to the 40th Squadron of the 96th Test Wing of the US Air Force (AvB Eglin, Florida) the first prototype of the deeply improved multi-functional fighter of the 4 ++ generation F-15EX "Eagle" II "were presented by Colonel General Duke Richardson as events that marked a fundamentally new stage in the formation of tactical aviation The US Air Force is of a transitional generation, during which the highest operational and tactical qualities of the old, good, well-proven in theaters of operations and loved by three generations of US Air Force flight personnel, the YF-15A-1-MC multipurpose twin-engine platform in the widest spectrum should once again be confirmed its modifications.

Indeed, having more "far-sighted" and many times more anti-jamming (in comparison with the AN / APG-70 airborne radars based on the outdated waveguide-slot antenna arrays with low resolution of the F-15E "Strike Eagle" fighters) AN / APG airborne radars -82 (V) 1 based on AFAR, promising F-15EX "Eagle II" will pose a very significant threat to our heavy multifunctional fighters of the "4 ++" generation Su-30SM / 1, equipped with far from the most advanced radar H011M "Bars-R" ".

Thus, the use in the radio-electronic architecture of AN / APG-82 (V) 1 AFAR radars of an aperture of 1500 transmit-receive modules with individual high-energy solid-state gallium nitride microwave transistors and attenuators, as well as several hundred radio frequency tunable filters RFTF (Radio Frequency Tunable Filters "), feeding the" jamming "groups of transceiver modules, will provide the pilots of the improved" Needles "with the opportunity not only to conduct long-range air combat in the most difficult jamming environment, but also to use the APG-82 (V) 1 radar in electronic warfare mode.

The highest level of noise immunity will be achieved due to the possibility of formation by the phase shifters and attenuators of the AFAR "dips" of the directional diagram in the direction of the enemy radio-electronic jammers, while the RFTF radio-frequency filters (having received information about the frequency parameters of the operation of the on-board radars of enemy fighters from the AN / ALQ-250 EPAWS) will simulate the response and aiming noise interference signals in terms of frequencies and amplitudes, transmitted to certain groups of receiving-transmitting modules of the active phased array to form narrow and high-energy "jamming" beams.

It should be noted that the power and efficiency of these beams can significantly exceed the spectral and spatial density of interference radiation from container stations of the EW L-266 "Khibiny-U / M" family with a power of about 3,6 kW.

As for the range of "capture for precise auto-tracking" of air targets of the Su-30SM1 type (image intensifier about 12 sq. M), the AN / APG-82 (V) 1 is capable of realizing this possibility at a distance of about 165 km in the absence of intense radio countermeasures from enemy and about 100-120 km in a difficult jamming environment.

Against this background, the N011M "Bars-R" radars of the Su-30SM1 fighters, having almost identical (in comparison with the APG-82 (V) 1) energy parameters, will be able to detect and "capture" the F-15EX at a distance of about 130 and 105 km in normal jamming environment and 80 and 67 - in the case of active radio countermeasures from the enemy (in our case, the AN / APG-82 (V) 1 radar operating in the electronic warfare mode).

The alignment not in favor of our machine is explained by nothing else, as, firstly, the lower level of noise immunity of passive phased array radars "Bars-R", unable to "zero" sectors of the directional patterns in the direction of the enemy's electronic warfare means, and secondly, the wider use in the design of the airframe of the improved "Eagle II" radio-absorbing materials (RPM) and coatings that provide a reduction in the effective scattering surface of the machine from 10-7 to 1,5-2,5 sq. m respectively (depending on the suspension configuration).

Nevertheless, the planned equipping of the modernized Su-30SM2 with more high-energy radar N035 "Irbis-E", or the hypothetical use against the F-15EX (in duel situations) of the multifunctional Su-35S fighters, also equipped with this type of onboard radars from the NIIP them. V. V. Tikhomirov, confidently neutralizes all the advantages of the "Eagle II" in long-range air battles.

After all, these stations are capable of locating new versions of the US "Needles" at a distance of 370-400 km, capturing them for "precise auto-tracking" from 320-290 km. And even in a difficult jamming environment, a sufficiently high average power of the H035 radars, amounting to at least 5 kW (3,3 times more than that of the Bars), will be able to partially compensate for the less solid level of noise immunity of its own PFAR architecture in comparison with the American APG radars -82 (V) 1.

Therefore, it is quite logical to assume that the crews of our Su-30SM2 and Su-35S fighters will be the first to implement the "detection - tracking - capture" cycles of the American F-15EX with the final interceptions either by means of the ultra-long-range URVV R-37M, or with the help of more highly maneuverable promising long-range URVV "Product 180" with "long-playing" dual-mode solid propellants (analogue of AIM-120D).

The Boeing Corporation specialists could only partially preserve the parity of the Eagle / II family in potential picks with our Sushki if they abandoned the more mediocre and “ordinary” F-15EX development program in favor of the previously frozen Monty project, which provides design of the F-15SE Silent Eagle transitional multi-role fighter.

The unique design features of the demonstrator of this machine were the presence of conformal fuel tanks and weapon bays, which, in conjunction with the inclined planes of the vertical tail unit with a "camber" angle of about 15 degrees, would provide an even greater reduction in RCS to 0,5-1 sq. m, reducing the detection range by means of "Barsov-R" and "Irbisov-E" by another 10-15%.

It was here that our overseas "colleagues" demonstrated their utter incompetence.

Ctrl Enter
Noticed oshЫbku Highlight text and press. Ctrl + Enter
We are
Washington's current regime is reinsured by supplying Qatar and Kuwait with a “strategic asset”How is Israel’s “strategic asset” after the Iranian “nuclear deal” and the Syrian conflict?
Military Reviewin Yandex News
Military Reviewin Google News
124 comments
Information
Dear reader, to leave comments on the publication, you must sign in.