The death of 55 missile submarines without war or intervention 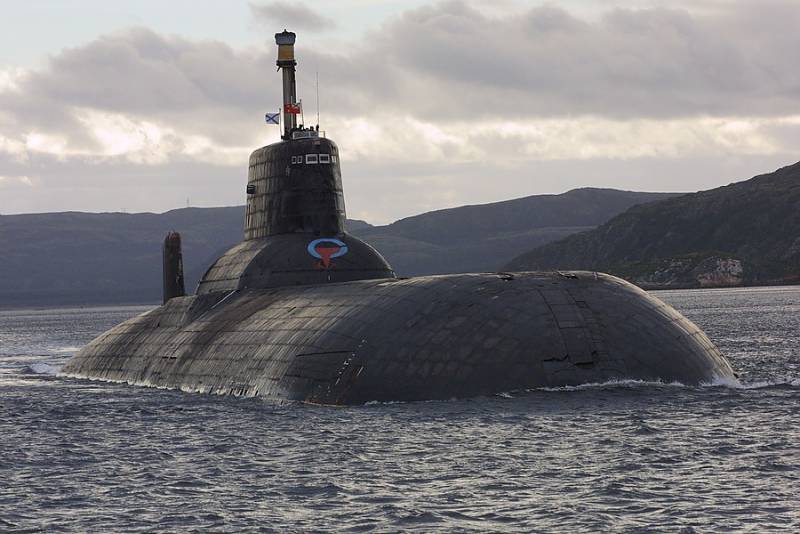 Almost all these ships had a sad fate. Some of them will rot for decades at the piers without repair, some will be quickly cut, because of agreements with Western partners. And some of them will survive and wait for a change in the form of Boreis, but too few, alas, to speak of a full-fledged naval component of the nuclear triad. We can say that the Russian Federation did not have a naval component of strategic nuclear forces in the dashing 90s. And the huge funds spent on the creation of a naval nuclear missile sword were simply destroyed, without purpose and purpose, and either for the sake of popularity in the West, or for saving money.

We love the word "Tsushima", they constantly recall either the Rozhdestvensky campaign or the flooding of the Black Sea fleet, otherwise the Tallinn passage. But the death of 55 missile submarines without war or intervention, for some reason, they do not denote this word. And in vain - the world's analogs история doesn't know exactly. Ships capable of serving up to 35–40 years with normal maintenance and repair were cut on needles after 10–20 years.

Apart from the 658 project, which was frankly flawed, it was 667A and their modification - 667AU, in other words - "Navagi" and "Burbot", nicknamed by the Americans "Yankee", became our first-borns who determined the development of SSBNs for the next decades. The ships were commissioned from 1967 to 1974 at two plants: "Sevmash" and Shipyard named after. Lenin Komsomol in Komsomolsk-on-Amur.

A total of 34 cruisers were built, which, alas, became obsolete almost instantly. It's all about liquid-propellant rockets, 16 in number. Initially, according to the project, it is the R-27, with a range of 2500 km, which is extremely small, but in the modification - the R-27U is already 3000 km. The cruiser could hit with eight rocket salvoes. I repeat - by the end of the construction of the series, this was not enough, and by the end of the seventies the missile range reached 10000 km, after all, the breakthrough of an anti-aircraft missile in the Atlantic was a serious problem.

But there were exits, as many as two.

The first was called 667AM. And they provided for modernization, with the replacement of the D-5 missile system with the D-11 complex with R-31 ICBMs, with a range of 4200 km. As a minus - the missiles remained only 12. As a plus - the rockets were solid-fuel, which greatly simplified the life of the crew. The project did not go. In addition to the advantages, it demanded gigantic investments, weakened the striking power of the missile carriers, and most importantly, the Soviet Navy was firm supporters of liquid-propellant missiles. But in itself, there was, in principle, the option of extending the life of ships capable of serving at least until 2004.

The second option was just perfect - 667AT. The project provided for the replacement of missile silos with 8 torpedo tubes (by replacing two compartments) and 32 RK-55 Granat cruise missiles with a range of 3000 km. Thus, without violating the SALT-1 agreement, we received powerful submarine cruisers based on old boats, that is, at a penny cost.

The project began to be phased out back in 1990, only three cruisers were modernized. And those ...

K-253 was expelled in 1993, after only five years after an average renovation and at the age of 24. K-395 in the same year was disarmed and used as a minelayer until 1997, when it completed its last combat service. Formally written off in 2002, but in fact - it was 1993 that became a point in her destiny. K-423 was decommissioned in 1994. The Russian response to the American "Ohio" with "Tomahawks" was decisively and irrevocably destroyed. There is nothing to say about the rest of the Yankees. Two of them were lucky to become experimental: these are K-403 "Kazan" and BS-411 "Orenburg" (carrier of midget submarines). They still served, the same "Orenburg" stayed in the ranks for 34 years. The rest quietly and quickly cut. 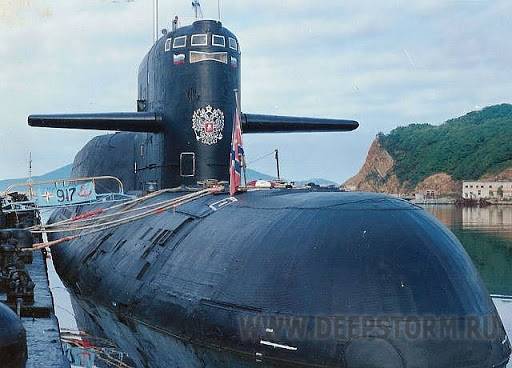 In general, "Murena" is correct. Soviet missile carriers were called "Deltas" in the United States (Delta-1 - Delta-4). And there is something similar to a predatory fish: 12 R-29 ICBMs of the D-9 complex carried a warhead of one megaton and means of overcoming missile defense, and fired at a distance of 7600 km, which made it possible to fire from the shores of the USSR, turning the cost of ASW in Severnaya Atlantic into wasted funds.

The same two factories as in the case of the 667A built 18 new cruisers, which entered service between 1972 and 1977. It was the predatory "Murey" that finally put an end to NATO's desire to fight with the USSR. But their fate was, alas, sad. 14 cruisers were decommissioned from 1992 to 1995 as part of START II. The other four did not fare much better. Two (K-2 and K-457) were in service until 530, but there is no information about going out to sea. K-1999 was active until 500, decommissioned in 1996. And only K-2000 "Kislovodsk" showed how the data of the cruiser could serve - the ship was in service until 2004, having completed only 20 combat services and 12 combat duty. Strong ships were built in the USSR, it is a pity that the wrong ones got it.

A kind of modification of the 667B project can be considered four cruisers of the 667BD project. By lengthening the hull by 16 meters, the number of missiles was increased from 12 to 16, and the range of modified missiles was increased to 9100 km. All four cruisers were delivered to the Northern Fleet in 1975. And they were written off 20 years later in 1995, without any attempt at modernization, although they could still serve for at least 10 years. Considering that four ships of the previous project were left in service - stupidity or treason? The question is rhetorical. Although there is a simple explanation: the ships were left in the ranks not for combat qualities, but in fact of average repair. Those who passed it at the end of the USSR remained, those who did not have time - went on pins and needles. 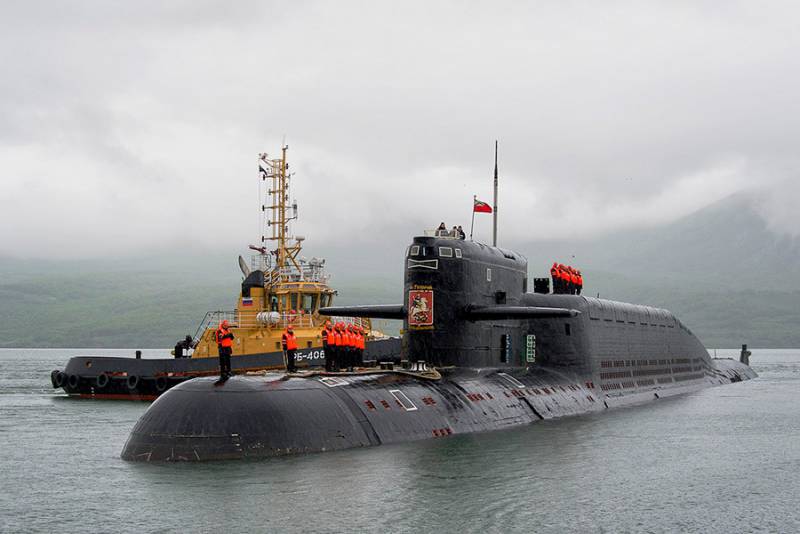 The next stage in the development of Project 667 was the SSBN of Project 667BDR "Kalmar". 16 R-29R missiles carried multiple warheads and had increased accuracy. In this version, the range reached 6500 km, in a monoblock - 9100 km. Improved and habitability, safety, missile salvo speed. The ships turned out to be excellent, and entered service in the period from 1976 to 1981 in the amount of 14 pieces.

And then there were the 90s. In 1995, the first two cruisers were decommissioned. By 2003, there were already six of them. The principle is simple: needs repair - sucks - cancellation in a couple of years. Another in 2004 was converted into a carrier of midget submarines. The other seven served. Firstly, the timelessness ended, and secondly, the leaders realized that with such a pace the fleet would remain only in pictures and as yachts for the oligarchs.

K-44 "Ryazan", built in 1982, is still in the combat composition of the Pacific Fleet, proving by the very fact of its longevity that with normal repairs and upgrades with "Boreas" could not be in a hurry. But it didn't work out. Half went to scrap, half was exploited for wear and tear. Meanwhile, these ships are the same age as the Ohio, the basis of the US NSNF. Good ships ... There were. But they strongly interfered with our peacefulness during the period of rampant democracy. 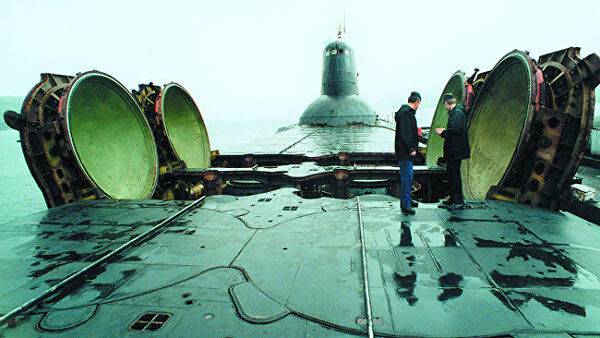 48000 tons of underwater displacement, 20 R-39 ICBMs of the D-19 missile system with a range of 8300 km and 10 warheads each. Note - solid-propellant rockets. In some ways, of course, too much. But on the whole - a reserve for decades. The lead heavy submarine entered service in 1981, the sixth and last - in 1989. Until 2021, they closed the NSNF niche for the Northern Fleet more than completely, even if all other SSBNs had disappeared.

I must say right away - not a fan of these ships. Gigantomania is not always a good thing. But in this case: they have already been built, run-in, childhood illnesses have been eliminated, and the basing has been ensured. Take it and use it. Fortunately for the United States, this six was capable of destroying it without leaving the bases. But ... it didn't work out.

First, in 1995, the TK-202 was withdrawn from service at the age of 12. Officially, awaiting renovation. There was no money, and the next year the huge cruiser was decommissioned. TK-12 was put on lockdown in 1996, after carefully firing off the ammunition. When, by 2000, the cruiser became completely unusable without normal maintenance, they were expelled. TK-13 was withdrawn to the reserve in 1997, the next year it was excluded. The United States willingly paid for the disposal.
TK-17 and TK-20 seem to have survived, but another problem emerged - missiles for cruisers were produced by Ukraine. It could be solved both by production there (at the end of the 90s, the dying Ukrainian industry would have grabbed this order with both hands), and by creating its own rocket, since there were some elaboration. But the stake was placed on the Bulava and Borey, and two huge cruisers stood idle. They are still there. From time to time there are rumors about them, like conversion into cruise missile carriers. But this is politics. In fact, these giants have only one road.

Out of the whole series, only the head TK-208 "Dmitry Donskoy" was lucky. Converted into an experimental ship for testing the Bulava, it remains in service to this day. And there he will have to live at least until 2025, that is, until the age of 45. Which is a kind of limit for these giants who were killed by their country. With US money, it is senseless and merciless. 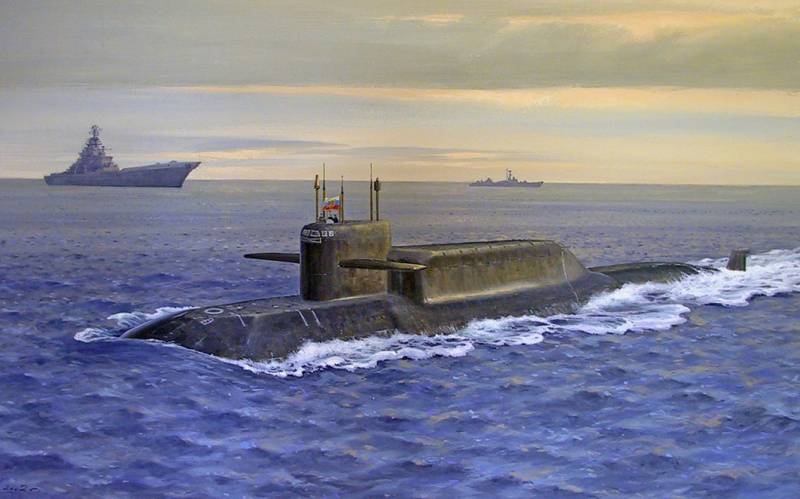 Those who are lucky - Project 667BDRM "Dolphin". Or "Delta-4" according to NATO classification. Seven ships of this type entered service from 1984 to 1990, becoming a logical development of the line of project 667. The size, missile range, all the same R-29, but RM modifications, higher accuracy ... A good example of how the second generation through evolution turns into the third.

They were lucky - they were not as powerful as the "Sharks" in order to arouse US interest. And they were young, in order to remain without repair in the dashing years. And in the 2000s, both understanding and money for operation appeared. K-64 "Podmoskovye" was converted into a carrier of deep-sea underwater vehicles, the remaining six - the basis of the Russian NSNF and survived to be replaced in the form of "Borey", not allowing Russia to be completely deprived of NSNF.

Their era is quietly passing away. As new missile carriers enter service, the last Deltas will be written off. But the ships did their duty - despite the drop in the number of SSBNs to the minimum level, the species itself was preserved. And he survived the pogrom, which would drag on for another five years, and the fleet simply would not have become.