"Marshal Shaposhnikov" in the first years of service

After a long program of repairs, modernization and testing, the large anti-submarine ship / frigate Marshal Shaposhnikov pr. 1155 returned to service. fleet and is now ready for combat and training missions. In the course of modernization, he received a number of modern systems and weapons, which allows him to continue service with greater efficiency.

From bookmark to modernization

BPK "Marshal Shaposhnikov" was built on avenue 1155 at the Kaliningrad plant "Yantar". The ship was laid down in 1983, and at the very end of 1984 it was launched. The act of acceptance was signed on February 2, 1986. At the end of 1987, the ship crossed three oceans to its permanent duty station.

Since 1988, Marshal Shaposhnikov has regularly participated in various operations in different regions of the World Ocean. So, in 1988-89. he ensured the safety of navigation in the Persian Gulf, in 1990 he took part in the evacuation of Soviet citizens from Ethiopia, after which he followed the course of the Gulf War. After that, in 1992-94. the ship underwent the first major overhaul.

In the future, the ship again entered combat service and participated in various events. The most famous episode with the participation of "Marshal Shaposhnikov" is the liberation of the tanker "Moscow University" in May 2010. As a result of these events, 16 naval sailors were nominated for state awards. In the following years, the BOD again participated in anti-piracy operations. 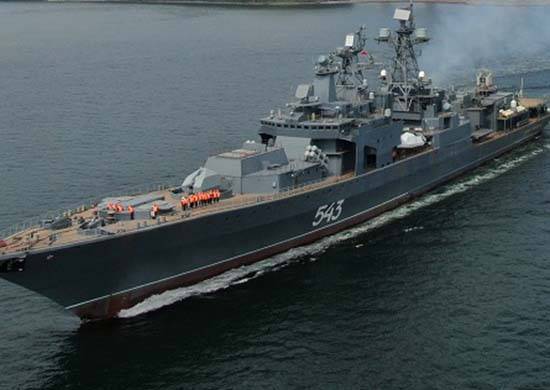 The frigate is on sea trials. Changes in the armament complex are clearly visible
In 2016, Marshal Shaposhnikov arrived at the Dalzavod Ship Repair Center for overhaul and deep modernization. It was reported that the renovation project provides for the replacement of parts of electronic, artillery and missile weapons. It took about three years to complete the work. At the end of 2019, the ship was planned to be put on sea trials with a subsequent return to service.

In mid-February 2018, a fire occurred in one of the interior spaces of the ship's bow. The crew and repairmen were evacuated; the fire was quickly extinguished. No one was hurt and major structural damage was avoided. However, the fire and some other factors negatively affected the progress of the work and led to a shift in terms.

Sea trials of the ship after repairs began on July 10, 2020.The Ministry of Defense reported that the frigate went to sea to check the operation of the propulsion system. After that, he had to return to Dalzavod for subsequent commissioning. The delivery of the ship was planned for the end of the year.

In mid-December, the Ministry of Defense reported that Marshal Shaposhnikov went out to the Sea of ​​Japan to conduct the final part of the sea trials. Then it was planned to check various ship systems and weapon systems, incl. introduced during the modernization. Already at the end of last year, the first firing was carried out using artillery and torpedoes. 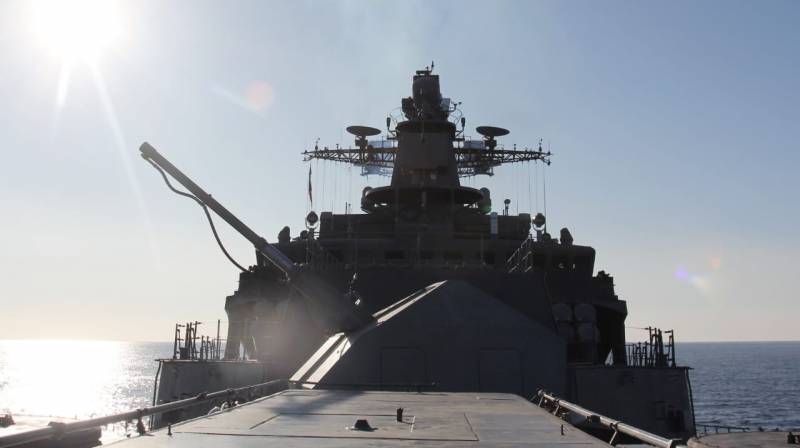 New artillery mount A-190-01
Since February 2021, the crew of "Marshal Shaposhnikov" has handed over the so-called. course tasks. Within the framework of the K-1 task, the organization of air defense and damage control, anti-sabotage measures, etc. were worked out. In the near future, it was planned to start the delivery of the K-2 task - conducting combat exercises at sea, including firing from all standard weapons.

In early March, "Marshal Shaposhnikov", together with other ships and the sea aviation The Pacific Fleet conducted exercises to find and destroy a simulated enemy submarine. Each ship was responsible for finding a target in its sector of the range. The detected enemy was attacked with depth charges and torpedoes.

In early April, the frigate conducted artillery fire using the A-190-01 installation, obtained during the modernization. The search for coastal targets and the adjustment of fire was carried out using the UAV "Orlan-10". Also, a check of electronic weapons took place, in which the Ka-27 helicopter was involved.

A few days later, Marshal Shaposhnikov launched the Caliber cruise missile for the first time. Shooting was carried out from the Sea of ​​Japan at a target at Cape Surkum from a distance of more than 1000 km. The missile successfully hit the intended target and showed an increase in the combat qualities of the modernized ship. 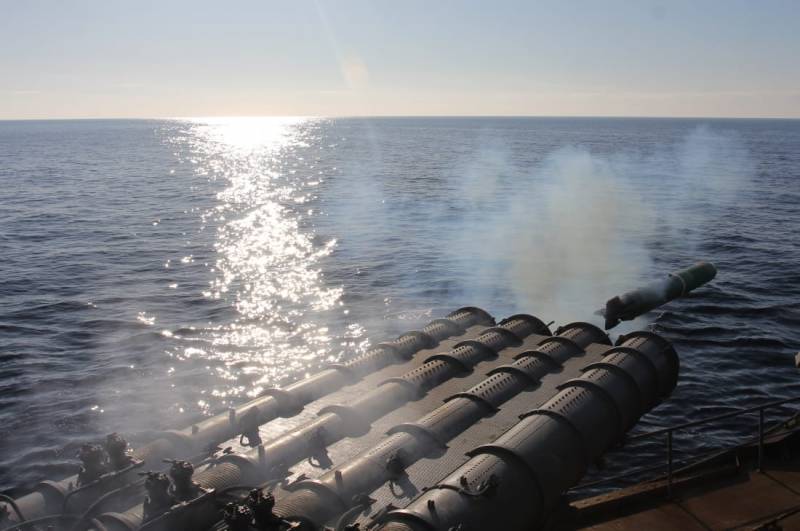 Torpedo firing, December 2020
In the course of all the measures taken, the frigate fully confirmed its compliance with the declared characteristics. The acceptance certificate was signed and the ship returned to service. On April 27, the Ministry of Defense announced its inclusion in the permanent readiness forces of the Pacific Fleet.

Marshal Shaposhnikov was originally built as a large anti-submarine ship, which determined the composition of its equipment and weapons. Over the years of service, the potential of such systems has decreased, and this has reduced the value of the ship in its original role. It was decided to radically rebuild the complex of weapons, making the BOD a multipurpose frigate with a wider range of tasks.

During the repair, general ship systems were restored or replaced. 80% of cable routes were replaced. In addition, it was necessary to rebuild the hull structures: dismantled and re-manufactured approx. 40% of these units. The restructuring of the weapons complex led to noticeable external changes.

As a result of the modernization, Marshal Shaposhnikov received a new MR-760 Fregat-MA radar and a 5P-30N2 Fregat-H2 information processing system. The MGK-355 "Polynom" hydroacoustic complex has been preserved and repaired. A new communication complex R-779-28 was used. The universal system MR-123-02 / 3 "Bagheera" was used to control artillery fire. 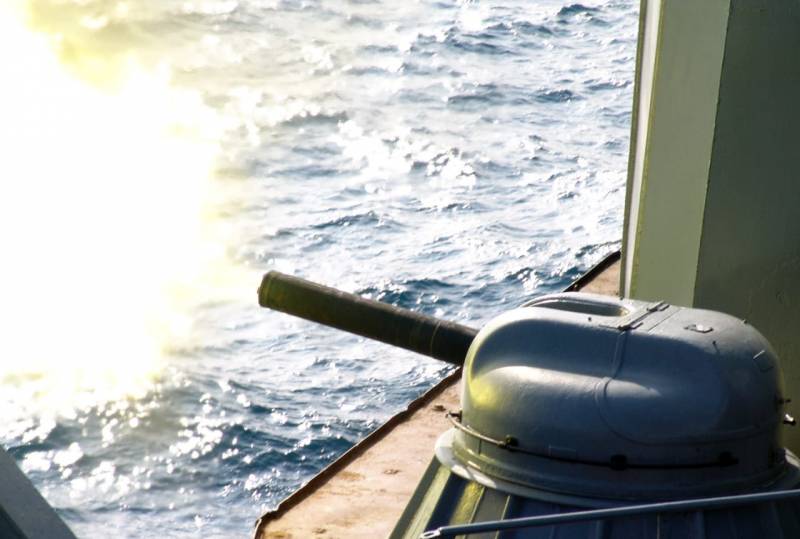 Installation of AK-360M at work
In the bow of the hull, the Kinzhal air defense missile system launchers are preserved. Behind them on the deck is a new 100-mm artillery mount A-190-01, which replaced the outdated AK-100. Behind it, instead of a second gun turret, is a 3S14 universal launcher with 16 cells for Caliber missiles. On the sides of the superstructure, large recognizable launchers of the Rastrub-B complex were previously located. Now in their place are placed two installations 3S24 with four missiles "Uranus" on each.

As a result of the modernization, four AK-630M anti-aircraft guns, two four-tube torpedo tubes and two RBU-6000 rocket launchers were retained. Artillery control is carried out using the Bagheera system. There may still be two helicopters on board for a wide range of tasks.

In a new role

The modernized Marshal Shaposhnikov can carry out air defense within a radius of 10-12 km using missiles and cannons. The capabilities for attacking surface and coastal targets using large-caliber artillery have been expanded, and the reduction in the number of installations does not negatively affect the overall performance. Main anti-submarine weapons have been preserved.

Due to the introduction of the Uranus missile system, the frigate is able to hit surface targets with a displacement of up to 5 thousand tons at ranges of up to 260 km, depending on the modification of the missile used. The Kalibr-NK complex can use missiles for various purposes, and the most famous products are for engaging ground targets at ranges of at least 1-1,5 thousand km. 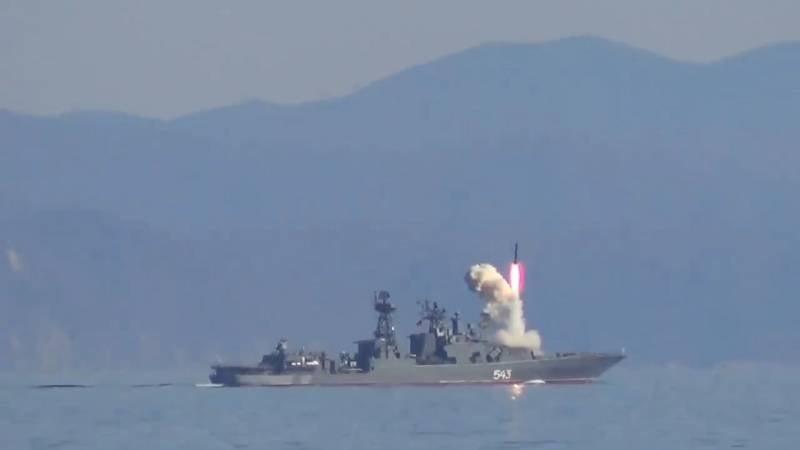 Launch "Caliber", April 2021
A fairly old warship, which does not fully meet current requirements, was used as a platform for installing modern equipment and weapons. As a result of this, its capabilities, fighting qualities and characteristics have increased significantly. In addition, a major overhaul was carried out with the extension of the service life, which will allow using new opportunities for a long time.

In addition to "Marshal Shaposhnikov" in the Northern and Pacific fleets, there are six more BODs of pr. 1155, and they can also undergo modernization according to a new project. At the end of March, the domestic media reported about the imminent start of work to upgrade the ship "Admiral Vinogradov" (Pacific Fleet). This year he will go to the repair plant, and in 2024-25. will return to the combat strength in a new capacity. Information about the possible modernization of other ships has not yet been reported.

Thus, one of the most interesting modernization projects for the old ship has been successfully completed, and the frigate Marshal Shaposhnikov is returning to service with new capabilities. At the same time, the modernization of existing ships does not exclude the construction of new ones - and these processes together lead to the desired renewal of the surface forces of the Navy.