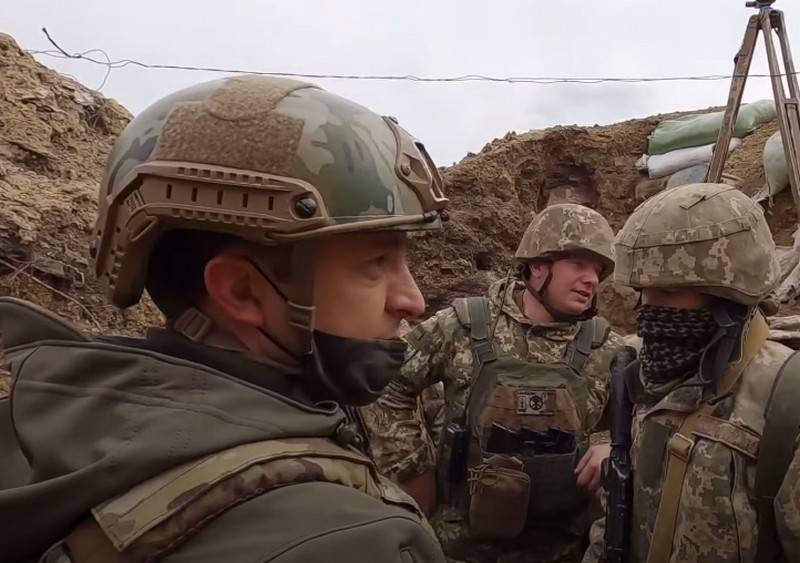 President of Ukraine Volodymyr Zelenskyy continues his trips at the positions of the Ukrainian army. After visiting the demarcation line in Donbass, the Supreme Commander-in-Chief of the Armed Forces of Ukraine went to inspect positions in the area of ​​the border with Crimea.


According to the press service of the presidential office, Zelensky arrived on a visit to the Kherson region of Ukraine, where he will visit the positions of the Ukrainian army in the area of ​​the "administrative border of the temporarily occupied peninsula." The main task of the president's arrival at the positions is called familiarization with the operational situation and communication with the military personnel. On the other hand, why not go, Russia has withdrawn its troops from the border, and the image of a heroic president has not bothered anyone yet.

After visiting the positions of the Armed Forces of Ukraine, the Ukrainian president will go to Kherson, where he will hold a meeting on the security situation on the "administrative border of the Autonomous Republic of Crimea", which is temporarily "under the occupation of Russian troops."

This is already the second trip "to the front line" of Zelensky, made in this incomplete month. Apparently, and the Crimean direction Kiev seriously considers "advanced" ...

On April 8, he arrived in Donbass, where for two days he ran around the positions of the Armed Forces of Ukraine, filming a "heroic video" for the Western media. The result of that trip was an appeal to Russian President Vladimir Putin "to meet in Donbass." But Putin did not appreciate Zelensky's "heroic" actions and invited him to Moscow to communicate in more civilized conditions.
Ctrl Enter
Noticed oshЫbku Highlight text and press. Ctrl + Enter
We are
Reports from the militia of New Russia for 27-28 September 2014 of the yearReports from the militia of New Russia for 26 August 2014 of the year
Military Reviewin Yandex News
Military Reviewin Google News
64 comments
Ad