Battle of Balaton: defeat of the German armored elite 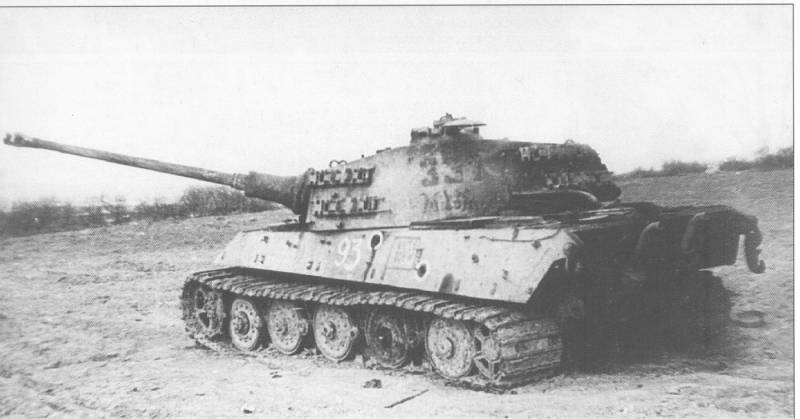 By the spring of 1945, Soviet troops had already destroyed the Debrecen and Budapest enemy groupings, entered Western Hungary and created conditions for the continuation of the offensive. At this time, the Headquarters of the Supreme Command set the 2 nd and 3 rd Ukrainian fronts the most important task: to strike in the Vienna direction, destroy the German Army Group South and transfer the hostilities to the territory of southern Germany. It seemed to many that the days of the Third Reich were numbered, but the Germans were preparing to inflict their crushing blow.


Losing Hungary for Germany meant losing a significant part of its industry. The last oil fields near Lake Balaton were also under threat. It was there, despite the need to protect Berlin, that the elite 6th tank army of the SS. With the support of the 6th Field Army and the 2nd Tank Army, it was supposed to defeat the southern flank of the Soviet troops and drag out the war for several more months.

The Soviet leadership greeted the intelligence reports on the concentration of heavy German equipment beyond Lake Balaton with distrust. According to all forecasts, the combat-ready troops of the Wehrmacht were to be pulled together to their capital. Despite this, the commander of the 3rd Ukrainian Front, Marshal Fyodor Ivanovich Tolbukhin, received another order: without stopping preparations for an offensive on Vienna, organize a defense and destroy the enemy. The front had at its disposal about 200 "thirty-fours" and "Shermans", but this was not enough to repel the German attack. Tolbukhin's headquarters relied on artillery and rifle formations, which, having occupied several defense zones, could weaken and then stop the offensive.

Before the offensive, more than 800 German tanks and assault guns were concentrated at Lake Balaton. The German plan was called "Spring Awakening" and provided for 3 attacks simultaneously, which were supposed to inflict a crushing defeat on the troops of the 3rd Ukrainian Front. There were all possibilities for this.

The operation began on the night of March 6 with two diversionary strikes. The 2nd Panzer Army of the Wehrmacht broke through the defenses and moved towards the city of Kaposvar. At the same time, the German allies (Hungarian and Bosnian formations) attacked from the south and occupied a strategically important foothold on the left bank of the Drava River. This came as an unpleasant surprise for the Soviet command, because the main attack of the Germans was supposed to come from the north, but it was not long in coming. The offensive began at 9 am. After half an hour of artillery preparation, heavy tanks moved into battle.

The tactics of Soviet soldiers were called the "fire bag". A battalion of 2-3 batteries was located on the way of the German equipment, which was the first to open fire on the frontal armor of the enemy, revealing the location and taking the blow on itself. However, at that moment, when the German tanks were a couple of hundred meters from the firing point, camouflaged batteries and self-propelled guns on the flanks began to shoot at them. Attacking enemy vehicles from 3 directions, the soldiers of the Red Army were able not only to delay the SS tank wedge, but also to inflict the first losses.

Meanwhile, the narrow space between Lakes Balaton and Velence did not allow the German command to throw the entire 6th Panzer Army into battle. The second SS Panzer Corps began to advance only in the evening. While German tanks, self-propelled guns and armored personnel carriers were equipped with night vision devices, Soviet soldiers only had rockets and shells with a pyrotechnic charge. They partially helped, but they revealed the positions of the defense. After XNUMX hours of fighting, the Red Army had to leave the important settlement of Sheregeliesh to the east of Lake Velence. however, there was no breakthrough into the depth of the defense. The Germans failed to fulfill their task.

On the second day of the operation, German equipment was moving east of Sheregeliesh, at the position of the Soviet 18th Panzer Corps. At this time, Fyodor Tolbukhin ordered to organize a counterattack involving all the corps reserves, including 20 repaired thirty-fours with untrained crews. The German self-propelled guns repelled the Soviet blow: "Naskhorny", "Marder", "Jagdpanther" and "Stugi".

Only on the 3rd day of the operation did the Germans manage to break through the main line of defense and come close to the last line. The vanguard remained about 25 kilometers to the city of Dunafeldvard and the Danube. Tolbukhin at this time reinforced the 18th corps with self-propelled artillery and threw it at the forefront of the German strike. It was a deadly fight. Tanks fired from small distances and the lives of the crews depended on the reaction and accuracy of the shots. The T-34 had 2 major advantages: lower ground pressure and good turret rotation speed. While the German vehicles got stuck in the mud and slowly turned their guns, Soviet tanks repeatedly hit them with armor-piercing shells. German troops retreated, leaving 10 destroyed and 14 destroyed tanks on the battlefield. This was the first tank victory of the Red Army during the Balaton operation.

However, in other areas, the successes were much more modest. The enemy continued to attack. Marshal Tolbukhin was forced to ask for reinforcements from the 2nd Ukrainian Front, but was refused. On the morning of March 9, the Germans attacked in the southwestern direction. The attack was attended by up to 450 tanks and assault guns, as well as hundreds of armored personnel carriers, which mixed with the ground the defense zone of the 35th Guards. rifle corps. Fyodor Tolbukhin gave the order to throw into battle all the reserves of the two armies in that area. At that moment, other directions were more vulnerable than ever.
Seeing the arriving Soviet tanks, the Germans stopped the onslaught and began to look for weaknesses in the defense. Time passed, and the number of Red Army troops grew in number. The artillery batteries took up positions, providing a numerical advantage. To minimize losses, the SS commanders decided to postpone the attack overnight and repeat the previous success, but everything did not go according to plan. With the onset of darkness, the attack on Germany began, when suddenly Soviet anti-aircraft searchlights came on. German crews not only did not receive advantages, but also began to see targets worse than Soviet tankers and artillerymen. Neither this nor in the following days did the German troops manage to break through to the Danube.

The Battle of Balaton was the last major defensive operation of the Red Army. Soviet soldiers were not only able to repel the attack of the most powerful armored forces at that time, but also prepared an offensive operation, which ended in the complete expulsion of the Germans from Hungary. The Reich army lost fuel, the tank elite of Nazi Germany ceased to exist, and there was practically no military power left to defend Berlin.

For more details, facts and details of the key battles of the Balaton defensive operation, see the video from the creators of the famous game World of Tanks.