Swedish submarines: when quality does not make up for quantity 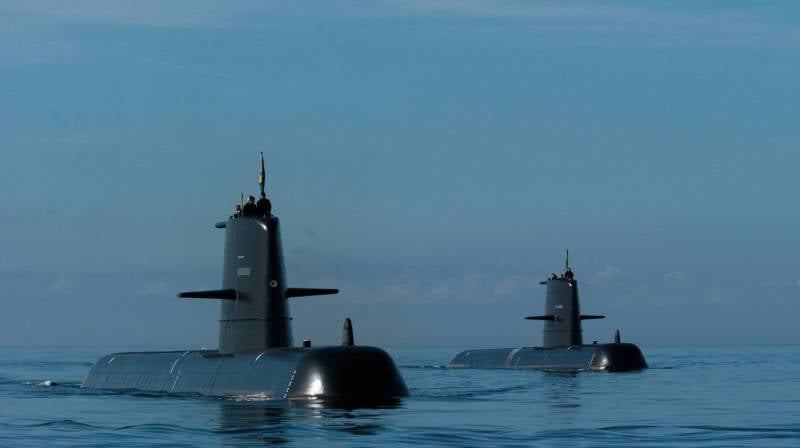 Yes, many experts today say that Sweden's non-nuclear submarines are the best in the world. The quietest, the deadliest. Capable of solving all the problems of Sweden's defense from ... By the way, it is worth considering in more detail from whom these miracle submarines will protect the Swedes.


But first, a little excursion into history.

For decades, submarines were produced in only two flavors: traditional diesel-electric submarines, which needed to rise to the surface every day or two to recharge their batteries with diesel engines, and nuclear submarines, which could be quietly underwater. for several months thanks to its nuclear reactors.

The disadvantages of nuclear submarines, of course, are that they cost many times more than diesel submarines and require the host country to have nuclear power technology and trained personnel. Plus the rather large size of nuclear submarines, which is not very convenient when it comes to the defense of, say, the coast of Sweden or Finland. Skerries, rugged relief, shallow depths, and so on.

In general, as a defender of coastal shallow waters, the nuclear submarine is not very good. But the diesel-electric one looks much more interesting. It is quieter than atomic (when running on batteries) and much cheaper.

But in small waters, the endurance of a nuclear submarine is not as important as the stealth of a diesel-electric submarine.

Sweden. A country located in a rather lively region of the Baltic Sea, where the interests of several regional powers, including members of the NATO bloc, intersect. Sweden itself is not a member of this bloc, but at one time it was given to the Swedes to understand what would happen if the country leaves the state of neutrality and decides to join NATO.

It seems to be helping so far.

The Swedes live with memories of the Soviet submarine S-363, which in 1981 sat on stones near the Swedish military base of Karlskrona. The boat was then nicknamed "Swedish Komsomolets". And the Swedish ships, impressed by where ours got under water, fought Soviet submarines for a long time. Often uselessly wasting ammo.

In 2014, Sweden again experienced a paranoia attack when the Swedish military tried to locate a Russian submarine in coastal waters, simulating a nuclear strike against Sweden. The boats, of course, were not found, but just in case they were very offended.

But the threat in Swedish brains still exists, and therefore something needs to be protected from it.

And work began to boil at the pace of the shock workers of capitalist labor.

Back in the 1960s, Sweden began developing an upgraded version of the Stirling engine, a closed-loop heat conversion engine created back in 1818.

In general, the engine debuted as an automobile engine sometime in the 1970s, and then the Swedish shipbuilder Kockums successfully adapted the Stirling engine for the Nekken submarine of the Swedish fleet in 1988. And they built three boats of this series. 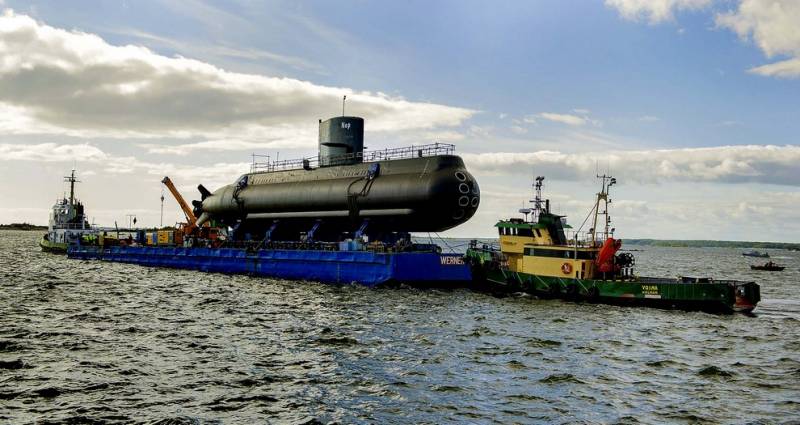 Since the Stirling engine burns diesel fuel using oxygen stored in a liquefied form in tanks rather than taken from the atmosphere, the boat can safely navigate underwater for several weeks without the need to float to the surface. Moreover, it does it very quietly. And faster than electric motors.

The first boat of the series, the Gotland, became famous for sanking the American aircraft carrier Ronald Reagan during the 2005 military exercise. The Gotland was leased by the US Navy and served as an "adversary" in the exercise. It turned out that diesel-electric submarines with an air-independent power plant are a very dangerous enemy. 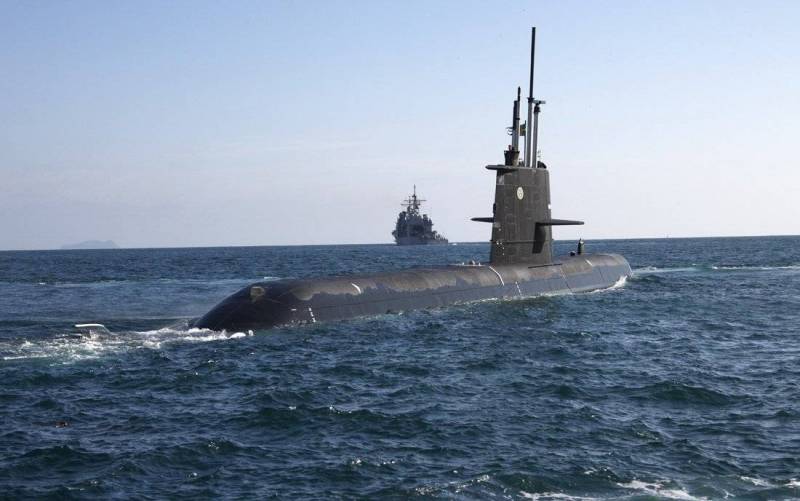 Stirling's technology in the Swedish version was licensed in Japanese and Chinese submarines, and Germany and France, for example, went their own way, developing more expensive submarines at VNEU on fuel cells and steam turbines.

The Swedes, meanwhile, even decided to make money on boats. And they did it in a very original way: they took four old Westergotland-class submarines and converted them for the installation of a Stirling engine.

To do this, the boats had to be cut and lengthened by 12 meters! From 48 to 60. Two boats still serve as the Södermanland class, and two were sold to Singapore and serve there as Archer class boats.

In general, "Södermanlands" is more an experiment than a serious work. The boats are quite old and should be removed from the fleet by 2022.

And to replace them, class A26 boats were supposed to come. Boats of a new generation and even a new concept.

But it didn't work out. The boats stubbornly failed. It is possible that it was a matter of competition. The Germans themselves happily built diesel submarines and traded them all over the world. And the company "Kockums", a Swedish shipbuilding company, belonged, however, to the German concern "Thyssen-Krupp".

There was a conflict of interest, and the Swedish military department refused to acquire boats from German Swedes or Swedish Germans. Only at their own.

Here the "own" concern SAAB appeared in time, which received the order for submarines. In an almost compulsory manner.

In SAAB, the gentlemen were pragmatic and did not want to quarrel with anyone. Therefore, without further ado, they bought Kockums from Thyssen-Krupp.

And in 2016, a contract was signed for the construction of two A26 submarines by SAAB for the Swedish Navy. The contract price is quite impressive: $ 959 million, which is only 20% of the cost of one Virginia-class nuclear submarine.

SAAB tried to sell boats to other countries: Australia, India, the Netherlands, Norway and Poland, but alas, the French and Germans very tightly took control of the diesel-electric submarine market with VNEU and did not want to give it to the Swedes.

Kockums claims the A26 will achieve new levels of acoustic stealth with the new Ghost technology, which will give the boat true near-absolute stealth. The technology includes acoustic damping plates, flexible rubber mounts for equipment, a low-reflection hull and a new demagnetization system to reduce the submarine's magnetic signature.

It is assumed that the A26 hull will also be very resistant to underwater explosions.

The boat will have X-shaped tail "fins" for greater maneuverability in the rocky waters of the Baltic Sea, and good armament from four 533-mm torpedo tubes that will fire heavy anti-ship torpedoes from the well-known company "Bofors" and two 400-mm tubes, which will use wire-guided torpedoes.

Four Stirling engines will provide an underwater cruising speed of 6 to 10 knots.

Manufacturers emphasize that the modular design of the boat allows for various modifications. For example, you can configure a boat to be placed in eighteen vertical launch silos for Tomahawk cruise missiles.

Poles, who have long dreamed of a boat with cruise missiles on board, are very interested in this situation. And the Swedes, for whom the "threat" is constantly present in the skerries in the form of Russian submarines, also really need it.

Let there is actually only one submarine for the entire Baltic Fleet.

Another important feature is a special "multipurpose" portal for the deployment of special forces and underwater vehicles, which is in great demand for modern submarines. Located between the torpedo tubes in the bow, the portal can also be used to receive the AUV-6 underwater drone, which can be launched from torpedo tubes.

Some American military publications such as The National Interest and Drive praise the Swedish boats in full vying. Exalting their possibilities to the skies.

Perhaps this is done with some hint in our direction. Anyway, they know what we read.

In fact, you can praise anything and how you want. There would be a desire. On the one hand, now it is worth just waiting for the boats of the A26 project to be realized in metal. And then everything will be clear: if potential buyers such as Poland, the Netherlands, Norway, that is, those who have a lot of desire, but little money, rush to buy, it means they have “floated”.

No - well, there are Germans and French on the market, there is someone to buy from, if necessary.

Another question is that if the Swedish boats are indeed very successful (and they may well be so), this may further affect the balance of power in the Baltic.

Alas, the Baltic Fleet, which has as many as one and a half "Varshavyanka" (one under repair) and without the Swedes, is in the position of the weakest in terms of submarine warfare. 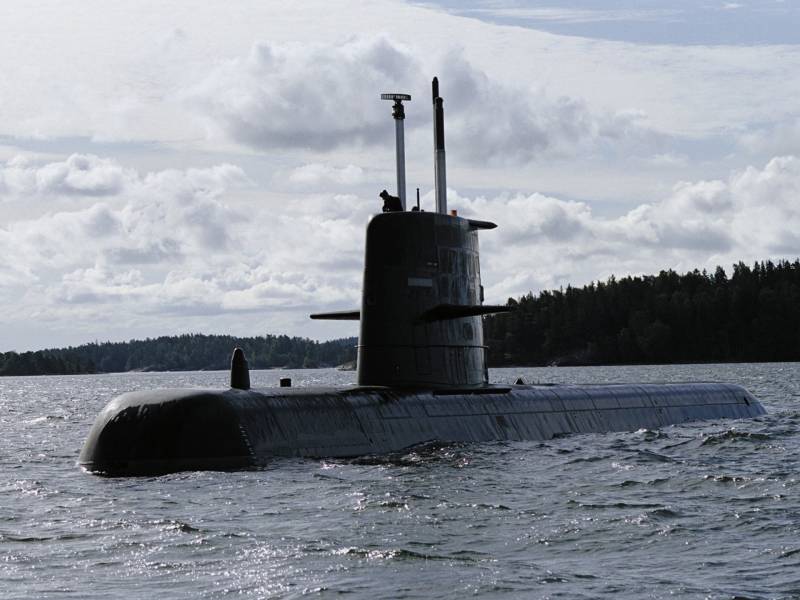 Yes, rarities of the 60s of German construction, which are in service with the Polish Navy - this is purely for statistics.

But even without the Polish ruins, there are 11 boats with VNEU and 10 ordinary boats against us. Just 21 times more than DKBF.

There is something to think about.

In the event that the Swedes get at their disposal three newest submarines, it will further exacerbate the chasm between the fleets. And if they start selling their boats to anyone who can pay, then the matter will become even more unpleasant.

Even if Swedish boats are not as luxurious as they are trying to show. In any case, three submarines, even excellent ones, this is not enough for Sweden alone to be able to solve some of its tasks, except for the protection of its coast. In reality, the case when quantity can compensate for quality.