"Battle" at Caransebes. How the Austrian army contrived to defeat itself 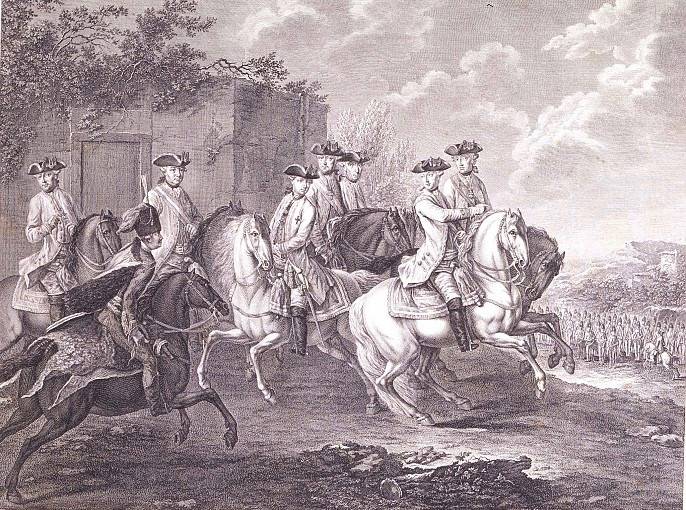 Emperor Joseph II with his generals. I. Brand

The Austrians and Turks fought for centuries for domination in Hungary and in the northern part of the Balkan Peninsula. The wars of the 1699th century were successful for Vienna. According to the Karlovytsky Peace Treaty of 1718, the vast lands of Hungary, Slavonia, Transylvania and Croatia were transferred to Austria. Under the terms of the Peace of Pozharevatsky in XNUMX, the Austrians received Northern Serbia with Belgrade, Northern Bosnia and other lands.

In the 1737th century, Austria and Russia began to coordinate their actions against Turkey. Austro-Turkish wars of 1739–1788 and 1790–1735 were interconnected with the Russian-Turkish wars of 1739-1787 and 1791-1735. The Russians and Austrians acted as allies. War of 1739-1739 was unsuccessful for Austria. At first, the Austrians were able to occupy part of Bosnia, Serbia and Wallachia, but in XNUMX they suffered a heavy defeat near Belgrade and were forced to give up not only the occupied areas, but also Banat and Northern Serbia with Belgrade.

The Vienna court sought to continue the offensive in the Balkans, using the strengthening of Russia and the consistent weakening of the Sublime Port. The Emperor of the Holy Roman Empire, Archduke of Austria and King of Hungary Joseph II concluded an anti-Turkish alliance with the Russian Empress Catherine II. After Petersburg rejected Istanbul's ultimatum demanding the withdrawal of troops from the Crimea, transferring Georgia to Turkey and granting the right to check all Russian ships sailing through the straits, in August 1787 the Porta declared war on Russia. In early 1788, Emperor Joseph II declared war on the Ottoman Empire.

The Austrian command, led by the archduke himself, gathered a large army of 100. It included Austrian Germans, Serbs, Croats, Hungarians, Romanians, Italians, etc. In addition, the country was hit by an epidemic at that time. Many soldiers were in the infirmaries.

The imperial troops reached the city of Caransebes, which was located on Romanian territory. On the evening of September 17, 1787, a cavalry detachment advancing in the vanguard crossed the Timis River. The hussars did not find the enemy. But they met a gypsy camp. They bought several barrels of alcohol from them. Exuberant fun began.

While the cavalrymen were resting, an infantry company came out to them. The Marines offered to share the drinks. The tipsy cavalrymen refused to share. In the course of the squabble that began, someone opened "friendly" fire. It is worth noting that even in the modern era, despite the development of military technologies, a significant number of soldiers die from friendly fire. So, during the Iraqi campaign ("Desert Storm"), the Americans lost in this way every fifth soldier.

The night skirmish of drunken soldiers grew into a common tragedy. Some of the soldiers fled from their opponents. There were shouts: "Turks!" The army, which was in the middle of the night march, was in panic. Everyone believed that the enemy was threatening them, and the battle had already begun. The regiments began to shoot at each other, mistaking their own for the enemy. The situation was aggravated by the fact of the multinationality of the troops. The Slavs did not understand the orders of the German officers. Slavonian border guards, irregular troops from the Slavs who lived on the border (like our Cossacks), were mistaken for the Ottoman cavalry. Some of the officers ordered the artillery to open fire on their cavalry. It seemed to many that the enemy cavalry was already inside the battle formations.

Thus, the night march turned into a "battle" due to management errors and a number of misunderstandings. The army took the fight and fought with itself, then the demoralized crowds fled. In the general confusion, the army nearly lost its emperor. Joseph tried to stop the panic, but was thrown from his horse and fell into a ditch. By morning, the army scattered.

Two days later, the Ottoman army led by the vizier Yusuf Pasha came to Karansebesh. The Turks did not find the enemy, but they found wounded and killed, abandoned supplies. The Ottomans easily took Caransebes.

The Austrians lost about 2 thousand people killed, wounded and captured. Some of the soldiers fled. Obviously, this shameful failure allowed the Austrians to mobilize. In 1789, the Austrian corps under the command of the Prince of Coburg helped Alexander Suvorov defeat the Ottomans in the battles of Focsani and Rymnik. Then Field Marshal Ernst Laudon drove the enemy out of Banat and recaptured Belgrade, Craiova. Coburgsky's troops entered Bucharest. In 1790, the Austrians launched an offensive on the territory of modern Romania.

However, in February 1790, Emperor Joseph II died. Vienna was concerned about the revolution in France and sought to concentrate attention and forces on a new front. Also, Prussia, behind which England stood, pressed on Vienna. Therefore, the new emperor Leopold II decided to make peace with Turkey.

An armistice was signed in September 1790. In August 1791, the Treaty of Sistov was signed. Vienna returned almost all the occupied territories to the Ottomans, having received only the fortress of Orsovo.