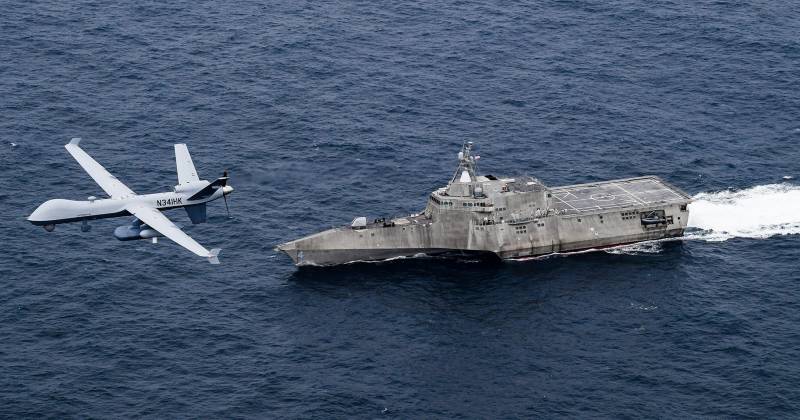 The first of its kind

The US military is currently concerned about integrating newfangled unmanned strike and reconnaissance systems into the structure of the Navy. Unmanned Integrated Battle Problem 19 or UxS IBP 26 was organized in California from April 21 to April 21 to practice the skills of interaction between conventional manned aircraft and ships with unmanned counterparts. In a loose translation, this sounds like "unmanned integrated combat mission 21".

In the United States, this event is called the first experiment of its kind with such a broad involvement of robotic combat systems. The military advertised what was happening off the Californian coast quite widely and willingly shared details. Rear Admiral Jim Aiken, curator of the UxS IBP 21 experiment, said in particular:

"Our goal in this exercise is to evaluate unmanned systems and how they can actually work together with manned systems."
Of particular interest, as they say in the West, is the multi-domain nature of what is happening - manned systems and drones work in close interaction in water, under water and in the air. 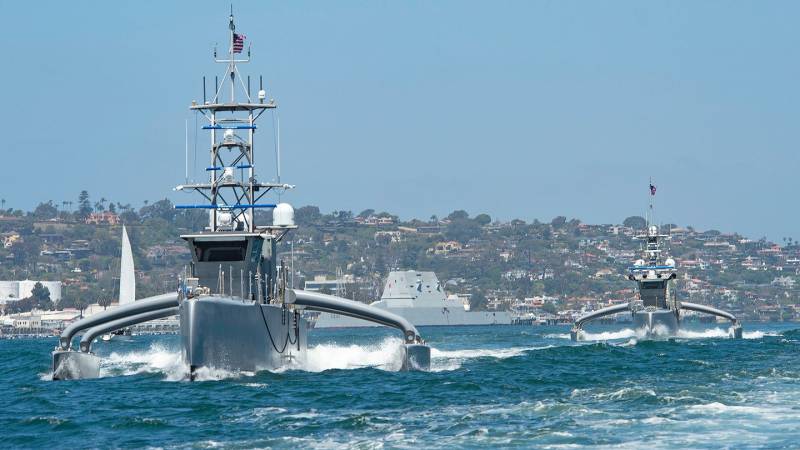 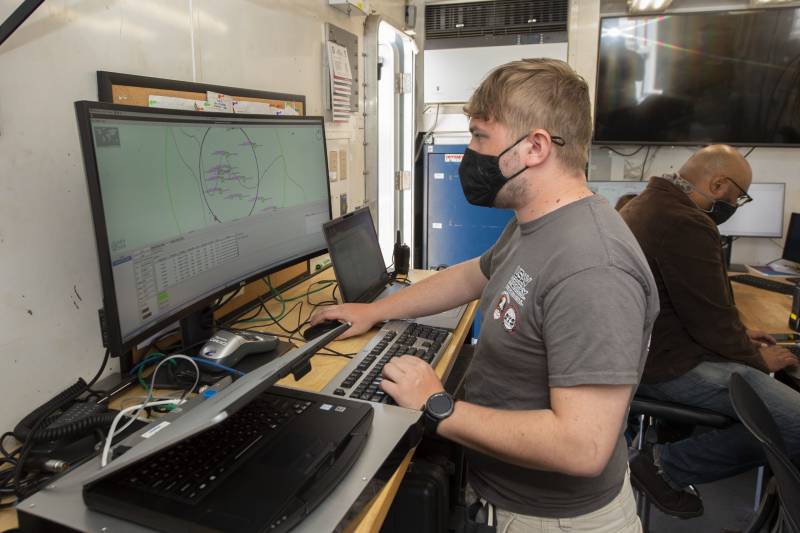 Operators Sea Hunter and Seahawk. Source: sldinfo.com
The air escort was carried out by several P-8A Poseidon patrolmen and an all-seeing electronic eye E-2C Hawkeye. The EA-18G Growler was responsible for suppressing the enemy, as well as the MH-60S Knighthawk and MH-60R Seahawk anti-submarine helicopters.

Remotely controlled vehicles were represented primarily by unmanned medium displacement ships or MDUSV (Medium Displacement Unmanned Surface Vessel). The US Navy includes two ships in this category, the Sea Hunter and the Seahawk. The most tested of them, the Sea Hunter trimaran has already proven itself quite well as an autonomous platform - in 2019, an anti-submarine vessel made the transition from San Diego to Pearl Harbor over a distance of more than 2000 nautical miles and back. The newest Seahawk is an improved version of the "sea hunter", capable of several months of autonomous navigation. From the air, the experimental fleet was guarded by Sea Guardian anti-submarine drones, naval variants of the well-known attack MQ-9 Reaper. An unmanned MQ-8 Fire Scout helicopter was also brought into the exercise.

In the sky, on the water and under the water

In the exercise, one could also see a reconnaissance drone from Vanilla Unmanned with the long name Ultra-Long Flight Endurance Unmanned Air Vehicle or an ultra-long-range unmanned aerial vehicle. This lightweight glider is capable of staying aloft for more than ten days, partly replacing satellite surveillance systems. 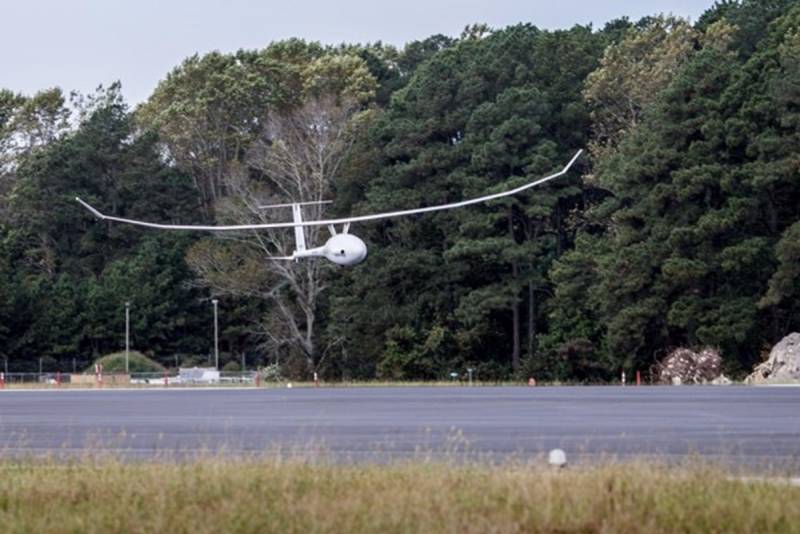 Scout from Vanilla Unmanned. Source: assets.newatlas.com
Another unmanned hero can be considered definitely unique - the dual-purpose Triton dual-use from the Ocean Aero company. The boat, more like a surfboard with a sail, is powered by the energy of the wind and the sun. If necessary, a small boat can dive under water and stealthily follow to its destination. In addition, in a submerged position, Triton also overcomes storms, otherwise its fragile structure will simply crumble from the very first serious wave. The drone can be dropped with a parachute to the place of operational work from the side of a transport aircraft and perform reconnaissance, communications and mine-fighting functions. In civilian design, the autonomous vessel is capable of performing a wide range of tasks: from environmental monitoring of the Arctic to meteorological observations throughout the ocean. 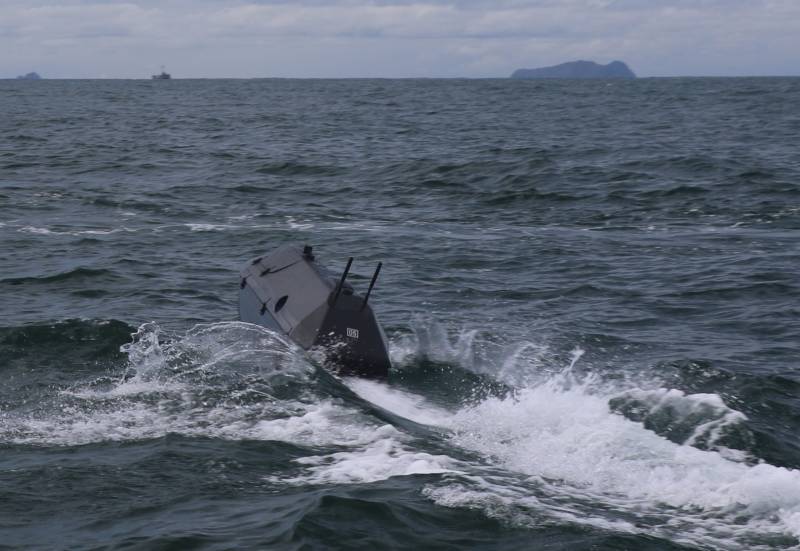 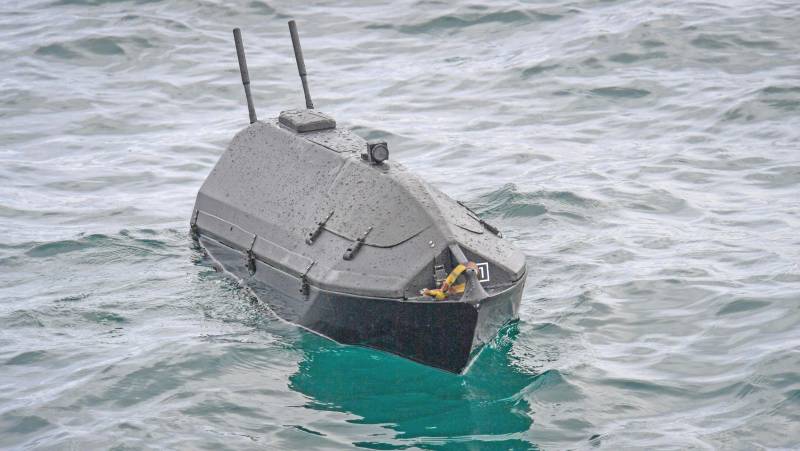 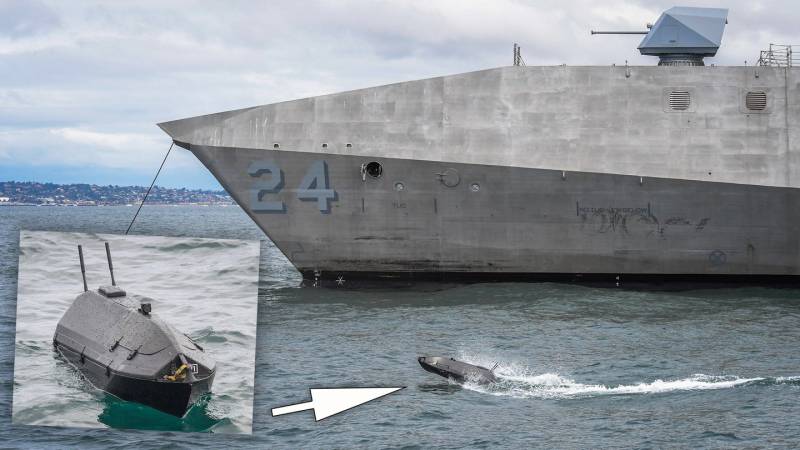 ADARO. Source: thedrive.com
From the information open to the general public, it is obvious that the Americans did not reveal all the participants in the exercises. So, there was no official information about the small drone ADARO, which was "lit up" in just a couple of photographs from the exercises. Journalists do not really even know what the abbreviation of the name means, but they still unearthed something about the baby. The object is woven according to the canons of stealth technology from composites and is a multipurpose modular platform. You can't put a rocket on such a boat, but the satellite communication equipment will fit perfectly. Unlike the two-average Triton, ADARO is not afraid of rough seas. The developers assure that the boat is completely sealed and capable of impressive somersaults during a storm.

What exactly was stuffed with the secret ADARO at the California exercises is unknown. One of the options could be an Ultra-Blade L-band satellite antenna from Israel's Get SA. Also, surveillance cameras and other reconnaissance equipment may appear on the baby. The Navy plans to use ADARO in conditions where finding any other drone and, moreover, a manned spacecraft is impossible for security reasons. The mentioned pair of Sea Hunter and Seahawk will be one of the possible options for the baby carrier ships.

At first glance, the Americans did not offer anything fundamentally new in the exercises in the area of ​​the California naval base of San Diego. Unmanned aerial vehicles are destined for the role of advanced enemy detection systems. It is expected that swarms of small drones will constantly patrol in their area of ​​operational use, preventing the enemy from slipping unnoticed. If necessary, autonomous reconnaissance aircraft will transmit target designation for hypersonic missiles in real time - the main strike weapon Maritime fleet in future.

The Americans are now working on entire families of drones capable of handling a wide range of missions at sea. Most interesting is the extensive fleet integration program under the Netted Emulation of Multi-Element Signature Against Integrated Sensors or NEMESIS project. 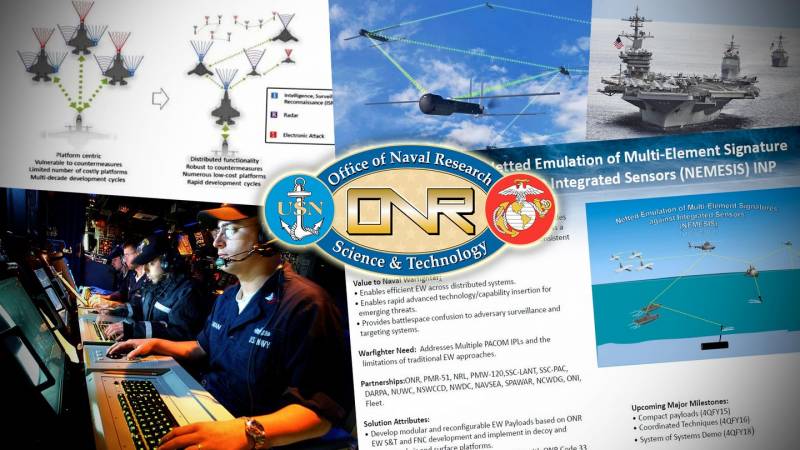 Not much is known about the NEMESIS project. Source: thedrive.com
This is one of the most secret areas of work of the Navy, associated with electronic suppression of enemy forces at sea and in the air. At the same time, swarms of drones will not only interfere with the enemy's reconnaissance, navigation and target designation, but will create phantom objects for strike. In fact, the Americans are ready to fundamentally revolutionize the principles of electronic warfare, moving from the usual suppression of surveillance systems to the formation of false targets by "simulating radio frequency radiation and radar signals from real platforms."

And all this military sailors intend to carry out with the help of drones in three environments: on the water, under water and in the air. Miniature drones will cruise under water, creating acoustic phantoms (imitation of propeller noise) of large submarines in the water area. In particular, for such false targets, the enemy can organize a whole spearfishing, wasting time and effort. The Pentagon did not tell how such "deceivers" themselves would work in conditions of massive electronic suppression.

The military has been working on NEMESIS since 2014 and, very likely, tested the first practical developments in the past exercises. The first theoretical war games involving the resources of a promising system were held in the United States back in 2015–2016. It was at this time that the customers decided on the requirements for the new product.

Serious scientific institutions were involved in the secret project: the Georgia Institute of Technology, the Johns Hopkins Applied Physics Laboratory, the MIT Lincoln Laboratory, the Naval Submarine Warfare Center, the Office of Naval Research, as well as the Naval Information Systems Command. war.

All this suggests that NEMESIS is not just another technological startup for the military, but a fundamental development that requires close attention from Russia.