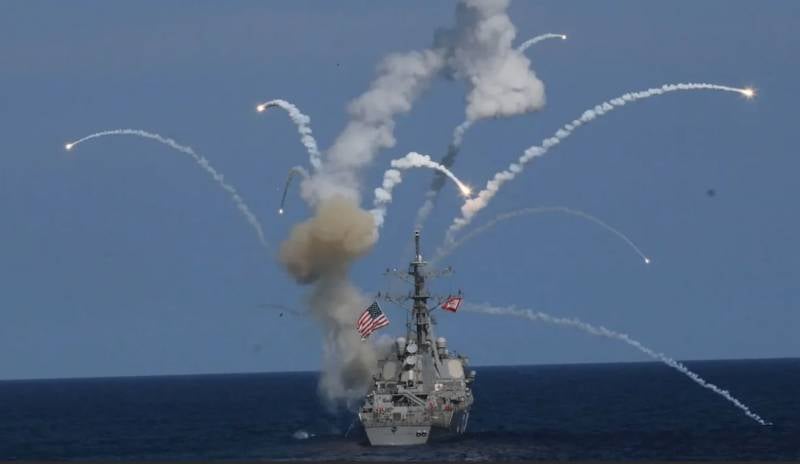 In the previous article, we considered kinetic methods of destruction that can be used to repel massive strikes inflicted by anti-ship missiles (ASM).


No matter how the developers try to increase the detection range of aircraft and anti-ship missiles attacking the ship, the number of detection and guidance channels of anti-aircraft missile systems (SAM), the ammunition of anti-aircraft guided missiles (SAM) and artillery shells of rapid-fire automatic cannons, aviation can still concentrate such a number of anti-ship missiles in a salvo that a surface ship (NK) cannot intercept.

Non-kinetic methods of destroying anti-ship missiles and evading their attacks can come to the rescue.

A potentially effective means of dealing with the raid of a large number of anti-ship missiles can be promising electromagnetic (EMP) ammunition equipped with a special warhead (warhead), which, when detonated, generates a powerful electromagnetic pulse. Such radiation can damage the electronics of the anti-ship missile system, primarily the guidance radar.

Diagram of electromagnetic ammunition
It can be assumed that missiles with an electromagnetic warhead will be used at the very beginning of the battle, to attack anti-ship missiles at the maximum distance from the NK, so that EMP ammunition does not damage the operation of the ship's radar and other missiles.

The advantages of EMP ammunition include the fact that one ammunition can potentially hit several anti-ship missiles at once. In addition, a missile defense system with an electromagnetic warhead does not need precise guidance to an anti-ship missile system.

The disadvantages of EMP ammunition include the fact that there are effective ways to protect against this type of impact. For example, the means of opening circuits in the event of strong induction currents are zener diodes and varistors. Also, RLGSN can be made on the basis of EMP-resistant low-temperature co-fired ceramics (Low Temperature Co-Fired Ceramic - LTCC).

At a minimum, missiles with an electromagnetic warhead can be used against mass launches of small-sized kamikaze UAVs, in which it is unlikely that it will be possible to implement full-fledged methods of protection against EMP ammunition.

In addition to the physical destruction of anti-ship missiles, there are ways to evade their strike by deceiving the missile seeker. For this purpose, means of electronic warfare (EW), systems for setting up protective curtains and decoys are used. 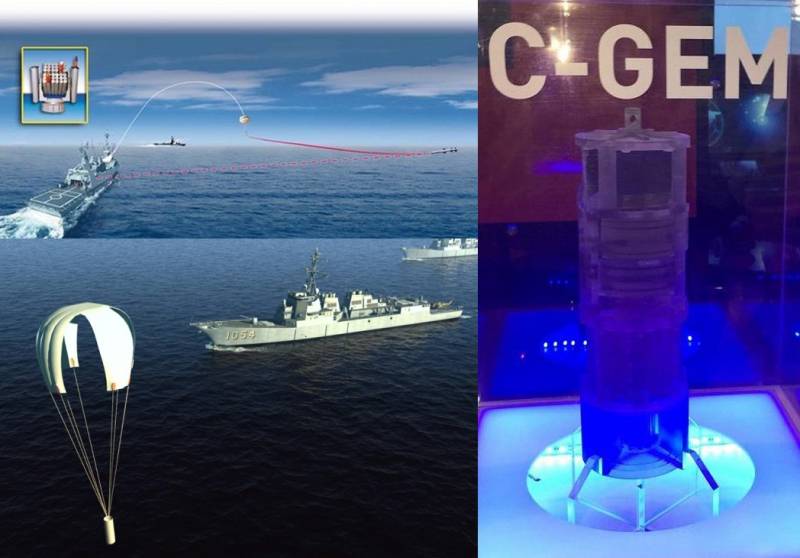 Active decoy C-GEM
In the previous article, we considered the possibility of increasing the viewing range of reconnaissance equipment by placing a radar station (radar) on board an unmanned aerial vehicle (UAV) of a helicopter / quadrocopter type, the electric motors of which should be powered via a flexible cable. Similarly, active emitters of electronic warfare equipment can be placed. 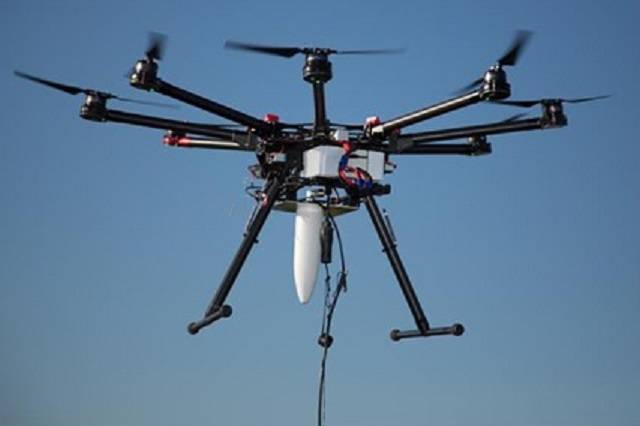 An octacopter-type UAV designed for the provision of telecommunications services, powered by an electric cable 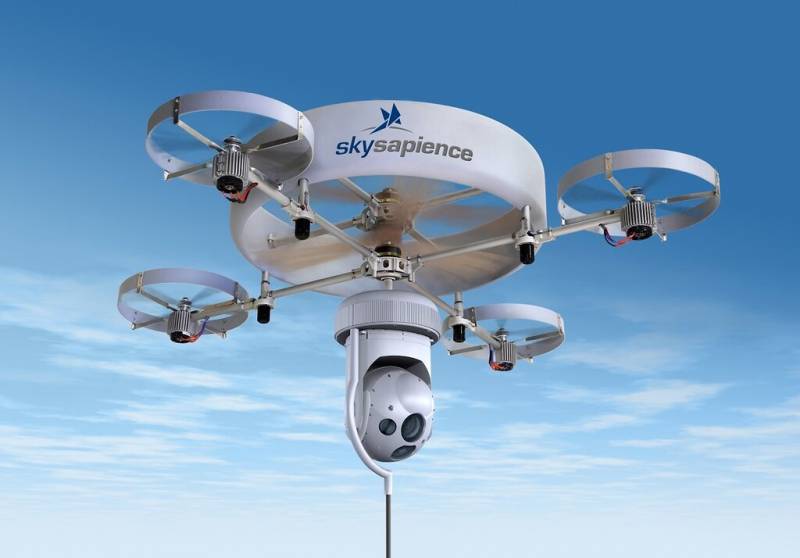 Israeli electric tethered UAV "HoverMast-100" by Sky Sapience, designed for long-term reconnaissance in hover mode. The complex, which includes four UAVs "HoverMast-100", can be placed in containers with a diameter of 0,8 meters on a ground carrier or surface ship. At the command of the operator, "HoverMast-100" rises into the air to a height of 15 meters in 50 seconds
Placing the emitters of the electronic warfare system on an external carrier, which can move away from the surface ship by 200-300 meters to the side, will minimize the risk of passive guidance of the anti-ship missile system at the source of electromagnetic radiation.

The advantage of electronic warfare equipment, placed directly on board the ship, is their extremely high power. For example, on the American destroyers of the Arleigh Burke class, the AN / SLQ-32 (V) 6 SEWIP Block II electronic warfare equipment is installed (it is planned to upgrade to AN / SLQ-32 (V) 7 SEWIP Block III), the generated jamming power of which can reach 1 MW. Of course, it will be difficult to transfer such a volume of energy to the UAV via cable. 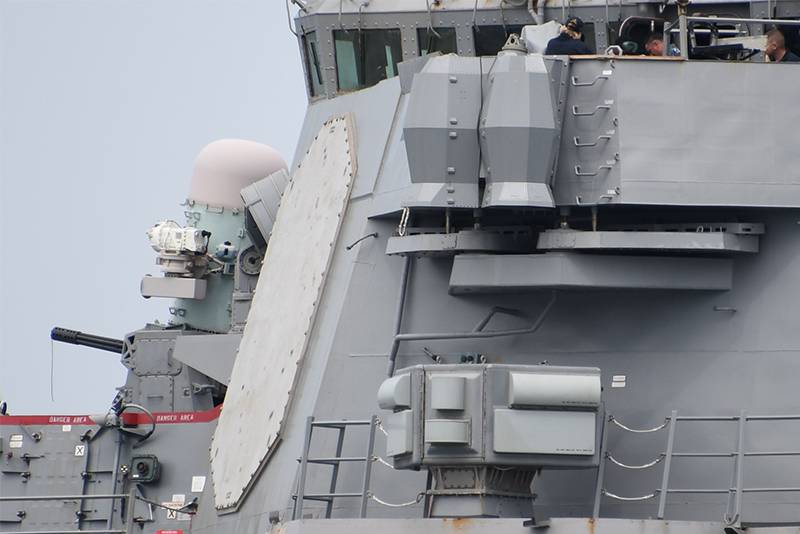 The option of placing electronic warfare equipment on unmanned surface ships (BNK) - companions accompanying the surface ship with a crew, may be considered.

In aviation, the direction of interaction between UAVs and manned fighters, which has received the name "faithful wingman", is now actively developing. A similar solution can be applied to navy, when a surface ship with a crew will be accompanied by 2-3 BNK, searching for submarines, setting up curtains and using electronic warfare equipment. 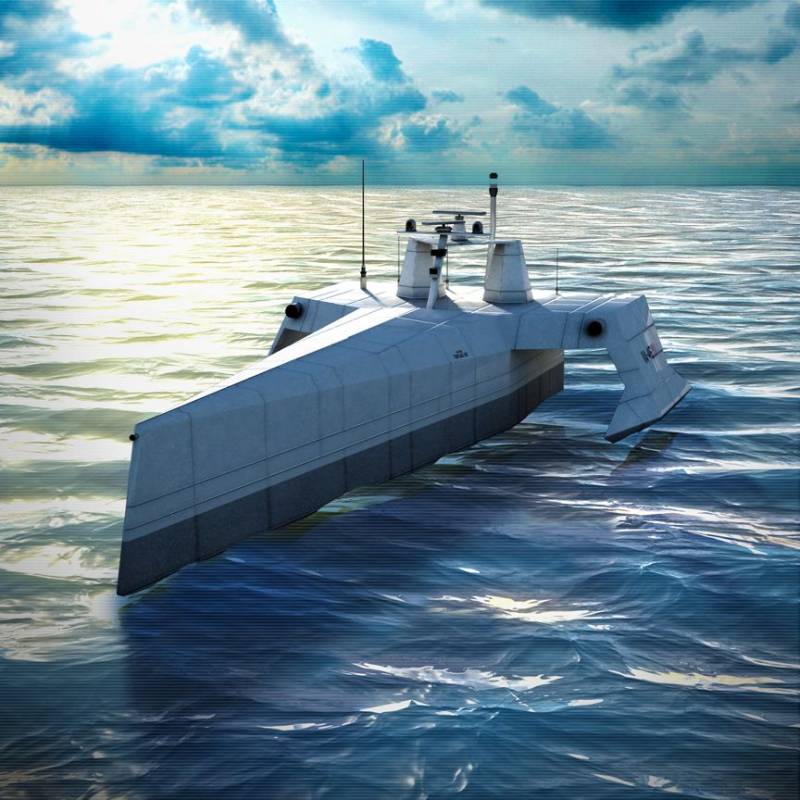 In the worst case, the anti-ship missile will hit the "slave" BNK, and not the surface ship with the crew.

Another way to reduce the likelihood of hitting anti-ship missile ships is to use false targets of various types. Such targets can be inflatable metal structures or other float-type corner reflectors. 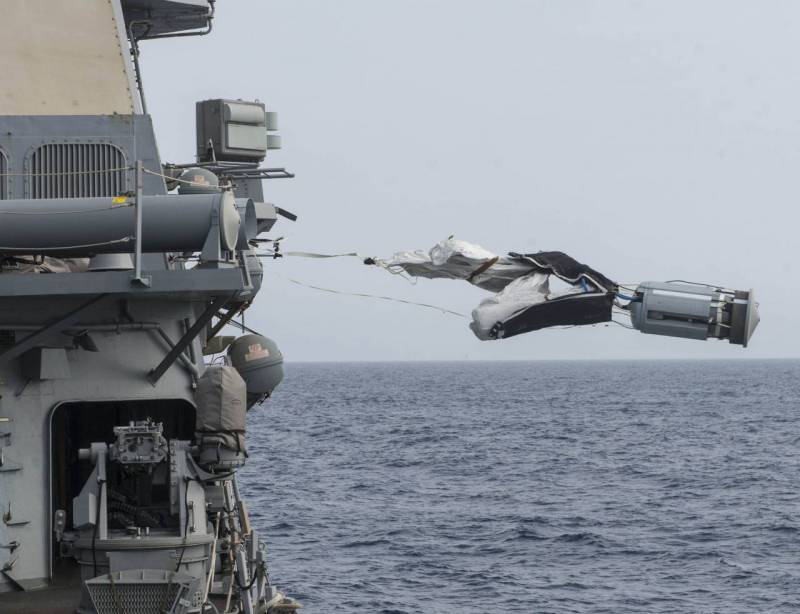 Deploy Rafael's Israeli Wizard decoys
The disadvantage of decoys is that they cannot move. That is, if the surface ship is moving at high speed, false targets will quickly lag behind it. The difference in speed can also allow the "advanced" RCC seeker to recognize real and false targets.

A partial solution could be the use of decoys towed behind the ship. A more advanced option is to equip decoys with electric motors, allowing them to follow the ship, receiving power from the cable. In fact, this will be the most primitive version of the BNK, the only purpose of which will be to take the blow. Given the presence of power supply, a mobile decoy target can simulate the thermal and electromagnetic radiation of a surface ship.

Thus, even a single surface ship will eventually turn into a "flock", including "tethered" mobile false targets, tethered UAVs with radar and / or electronic warfare means, as well as more "advanced" electronic warfare equipment and setting up camouflage curtains. 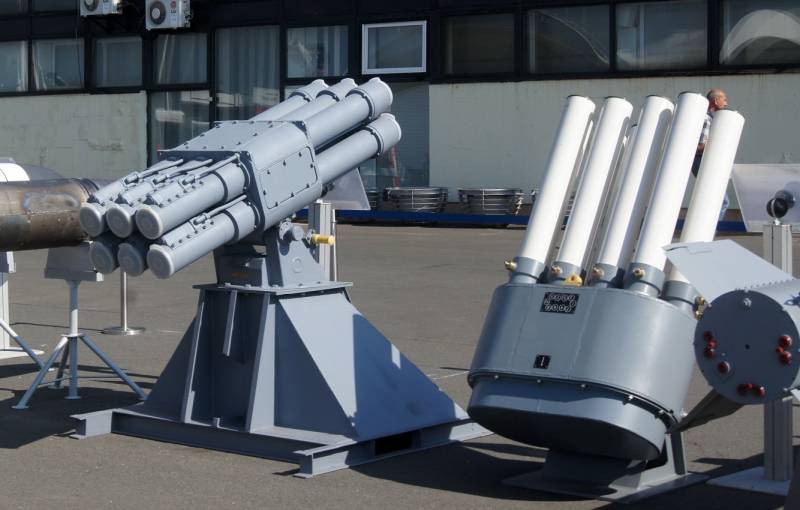 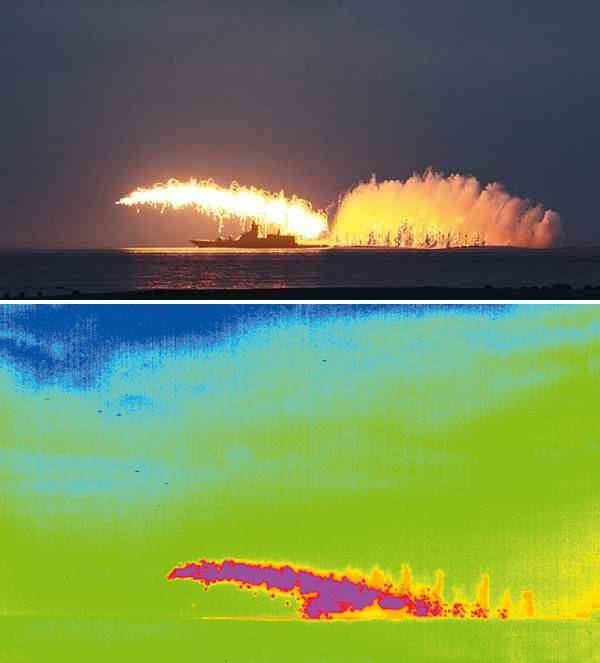 Formation of a cloaking curtain by a surface ship (image in optical and thermal ranges)
It can be assumed that the improvement of the RCC seeker, the appearance of combined multi-band seeker, including radar, optical and thermal imaging channels, in combination with improved target selection algorithms, will significantly reduce the effectiveness of masking curtains. At the same time, electronic warfare systems are also being actively improved, and advanced laser self-defense systems for surface ships can be used against optical and thermal imaging guidance channels.

Development of laser weapons in the navy was discussed in detail in the article Laser Weapon: Navy.

There is an opinion that laser weapons in the Navy will be ineffective due to the fact that the lower boundary of the atmosphere over the sea is maximally saturated with water vapor, which prevents the passage of the laser beam. In addition, the anti-ship missile system is a fairly large and massive target that requires high-power laser weapons to defeat. This is partly true, but only partly.

Firstly, although to defeat anti-ship missiles, laser weapons are required of much higher power than, for example, to destroy air-to-air or surface-to-air missiles, but the power of ship power systems is much higher than that which can be obtained on plane. And there will be no problems with cooling - the whole ocean is overboard. For example, if it is now planned to install laser weapons with a power of about 150 kW on aircraft (with the prospect of increasing to 300 kW), then on modernized nuclear submarines of the Virginia type, it is initially planned to install a 300 kW laser (with the prospect of increasing the power to 500 kW) ...

Secondly, at the initial stage, laser weapons can only be used to destroy optical guidance systems of anti-ship missiles, which, in combination with a radar, can significantly increase the likelihood of damage, even when using electronic warfare equipment and masking curtains. It can be assumed that a laser weapon with a power of up to 50 kW will be sufficient for this purpose. The same power is quite enough to destroy small and medium-sized UAVs, boats and motor boats.

The combination of electronic warfare and laser weapons will completely "blind" the anti-ship missile system. Moreover, in the case of an optical / thermal guidance channel, the blinding will be irreversible (with sufficient power of the laser weapon).

At the moment, the possibility of installing laser weapons is initially included in most projects of promising warships of the leading countries of the world.

In 2021, the Arleigh Burke-class USS Preble will receive a 60 kW HELIOS laser self-defense system - it will become the first ship in the US Navy to be equipped with laser weapons.

The combination of kinetic and non-kinetic means of destruction of anti-ship missiles, as well as methods of evading an attack, can significantly increase the survivability of surface ships with the massive use of anti-ship missiles, even taking into account the fact that in the foreseeable future surface ships will lose the opportunity to get lost in the vastness of the oceans.

The growing threat of massive attacks by the enemy anti-ship missiles will lead to the fact that the main task of surface ships will be to protect themselves and a certain area around them from aviation and air attack weapons. At the same time, the execution of strike missions will fall on nuclear submarines - carriers of cruise and anti-ship missiles (SSGNs).