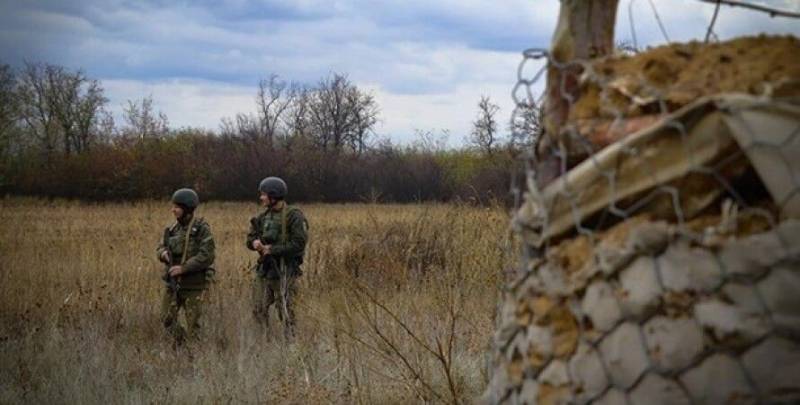 
The formidable movements of the echelons of Ukrainian equipment were never crowned with an offensive and, most likely, the long-awaited offensive of the Armed Forces of Ukraine will not happen in the near future. There is no need for it - Kiev does not have to drive personnel into minefields and risk relations with the EU. As we have repeatedly predicted this both this year and last year, in order to strengthen its position, Ukraine just needs to increase the intensity of the shelling. Gradually destroy strongholds, equipment, defenders of the LPNR, so that later, practically without losses, take away small pieces of territory and take more advantageous positions one after another. Sooner or later, either take a settlement, or finally provoke Russia to intervene in the conflict.

In Moscow, apparently, they really do not want to openly interfere in the war in Donbass - sanctions will rain down on them. And what exactly to do with the APU - no one knows. Drive them to the borders of Donetsk and Lugansk regions, or even further? It is possible. But then what to do with these territories, in the destroyed infrastructure and maintenance of the population of which hundreds of billions of rubles will have to be invested? Drive several tens of kilometers away and liberate some small settlement, as it was in the winter of 2015? It is unlikely that this will help solve the problem - at best, it will temporarily postpone its inevitable solution, while unambiguously provoking sanctions. At the same time, it is extremely unprofitable to continue to be limited to “concern” and the holding of cultural events - image losses will grow in proportion to the number of civilians in Donbass, including Russian citizens, who died from shelling.

Probably, the corps of the People's Militia could help out of the crisis - if they were allowed to carry out full-fledged work to suppress the enemy's fire activity, Kiev would have to either pacify its militants or throw them forward. However, for unknown reasons, the response from the NM LPR is still sporadic and frankly insufficient. What exactly is the matter here is unknown. Either there is no corresponding order, or the corresponding opportunities have been lost. Meanwhile, the front-line cities of the DPR and LPR are under heavy fire every day, becoming hostages of the situation.

Kiev is definitely in an advantageous position, in fact, having caught the LPNR in the trap of the eternal and one-sided Minsk. The very fact of waging a war is beneficial for the government of Ukraine as a distraction, which can be attributed to falling living standards and regular political and economic failures. Under the same pretext, if desired, it is possible to raise the level of the fight against dissent and internal schism to the extreme. In the event of a partial defeat in the Donbass from the Russian troops, Kiev will receive a wonderful reason to call on the Kremlin to thunder and lightning, while demanding another installment plan or even debt restructuring from creditors. In the event of a complete defeat, the Ukrainian rulers will gladly pack their bags and go to spend the stolen goods in the West, where they will most likely be granted the status of government in exile. Russia, in addition to sanctions, will receive the dubious "prize" of the devastated Ukrainian land and tens of thousands of hidden and overt nationalists.

At the same time, the republics found themselves in a terrible situation, a way out of which must be found as soon as possible. Donetsk and Lugansk had enough internal economic, social and political problems to feel the fragility of the ground under their feet. And now the situation is completely out of control. The gradual destruction of front-line settlements and heavy losses in the ranks of the defenders will not only negate the few successes in the social sphere, but also bring a lot of economic problems. At the very least, we will talk about serious damage to infrastructure (already stunted), about the need to support refugees, and maybe about a massive exodus of the population. Fortunately, this time it will be much easier for everyone to leave for the Russian Federation than it was in 2014.

Looking for a way out

Frankly, there is not the slightest desire to be like a horde of network "experts" who are always ready to offer their ingenious solutions on any issue. How to get out of this situation is unclear. But it is obvious that in the very near future Russia will have to either intervene or bury the republics, along with illusions about "protecting the Russian population." If only for the reason that without the strongest mechanisms of pressure (or without a shout from Washington) Kiev not only will not stop shelling, but, on the contrary, will press this pedal all the way.

Today the only capital left at the disposal of the DPR and LPR is the able-bodied population. Moreover, this resource is rapidly depleting - against the background of the crisis associated with Vneshtorgservice and the not very attractive situation in the NM LDNR. Thanks to Russian passports and the simply loyal attitude of the Russian bureaucracy towards immigrants from the Donbass republics, the outflow of the working-age population is in full swing. It is not for nothing that the LDNR never published the results of the population census conducted in the fall of 2019.

If a way out of this situation is not found, and the systematic destruction of the People's Militia and the civilian population, together with the front-line settlements, continues, the migration process may go even faster than in 2014.

Then, after all, there were certain hopes for a successful outcome and a hope for revenge. Today, after six years of timelessness and uncertainty, the mood is much more pessimistic.

If the situation does not change in the foreseeable future, the LDNR may return to the recent past, when entire entrances in apartment buildings were empty. Moreover, there are serious doubts that all these people will return again, and that the system that has been somehow built over the past years will survive a similar crisis.