Donetsk is preparing to defend the Russians in Ukraine - when will Donetsk itself be defended? 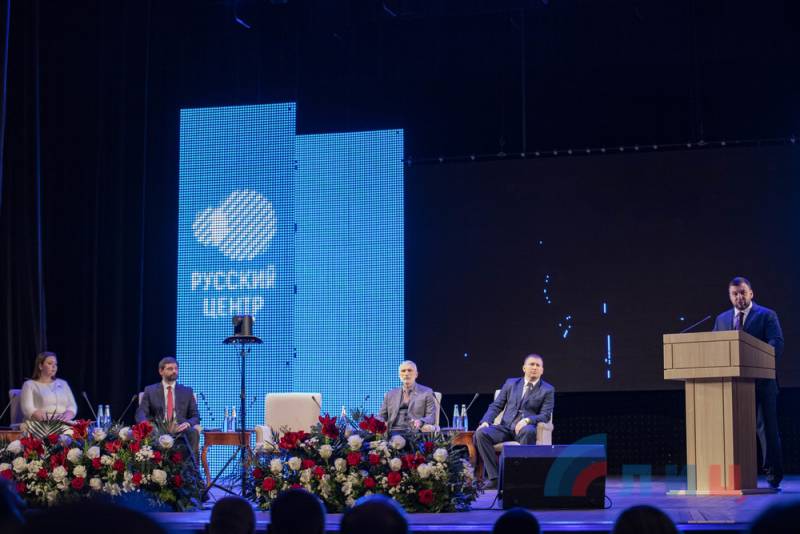 On the one hand, people with bright faces gathered in the DPR and for more than five hours talked about various pleasant things - how they will save Russians in Ukraine, protect them from oppression. And everything is in the same spirit. Another reason for the Russian media and politicians to remember about the LPNR, at the same time finding funding for the so-called "program of reintegration of the population of Donbass."

On the other hand, it is somehow embarrassing to talk about the protection of Russians in Ukraine, while right in the course of the event, the Russians of Donbass were killed under large caliber of Ukrainian artillery.

The protection of Russians is, in general, an extremely difficult task, which is most often realized either by holding Pushkin readings, or concerts of pop stars or some kind of literary or art competitions. In the LPNR, where Russians (with and without Russian citizenship) do not need tea drinking and conversations about literature, traditional methods seem initially useless. Frankly speaking, the very idea of ​​raising the issue of protecting the Russian people in Ukraine in the Donbass at the very moment when the military aggravation has been going on for four months seems somewhat cynical. Maybe it would be worth protecting the inhabitants of the LPNR first, before taking over the whole of Ukraine?

Otherwise, it will turn out, as in the case of the implementation of the program of reintegration of the population of Donbass, when residents of the territories occupied by Ukraine easily received free assistance in medical institutions of the LDNR, while local residents were most often forced to independently purchase all the necessary medicines.

The very idea of ​​protecting the Russian population in Ukraine looks somewhat belated - somewhere at least 7 years, during which the regime and the extremists it supports actively killed, beat, sent to prisons and forced journalists, politicians, activists and ordinary people to leave their homes forever who tried to demonstrate a positive attitude towards Russia. During this time, thousands of people were physically destroyed, expelled, arrested or simply deprived of the right to vote - those who were really ready to speak out for Russia. How relevant protection is today for survivors is an extremely difficult question, given that the overwhelming majority chose to accept the imposed rules of the game.

The "defense" program announced at the forum unambiguously presupposes interaction with a relatively rule-of-law state, but certainly not with present-day Ukraine, where lawyers are easily killed, and for any ties with Russia they can be arrested, beaten, expelled, etc. In particular, it touches the offer to Russian citizens of Ukraine to move to the DPR. Almost everyone who was fundamentally important was the Russian language, Orthodoxy and self-identification with Russia, left Ukraine long ago. Those who remained could have been tempted only by economic prosperity, but it was never achieved in the unrecognized republics - the standard of living in Donetsk and Lugansk is comparable to that of the Ukrainian periphery. It is unlikely to be too attractive, especially given the factor of recurring hostilities, curfews, etc.

But what about LDNR?

All this multi-layered talking shop looks like a profanation, or an imitation of activity - nothing more. Although to some, it might seem like a sophisticated mockery. Why is it necessary today to take vows to save the "Ukrainian Russians", while the inhabitants of Donbass die almost every day? A question without a digestible answer: the impression is that it is simply necessary to resist Kiev somehow, but one does not want to take decisive action.

At the same time, a simple and logical question, voiced the other day by ex-rebel Vladlen Tatarsky, remains relevant:

“Yesterday Donetsk hosted a forum on discrimination against Russians with the participation of Moscow journalists. I wish they had a whole pool of it in Alchevsk with Russian people who are not paid a salary. It seems to me that this has a direct bearing on discrimination against Russians. "
Indeed, maybe it would still be worthwhile to first put things in order in the LPR and provide local residents with a dignified existence, and only then develop strategies to save the Russians in Ukraine?

Indeed, did they start from that end?

However, something suggests that the stated strategy is unlikely to be implemented.

Ctrl Enter
Noticed oshЫbku Highlight text and press. Ctrl + Enter
We are
Commentary on A. Petrov's interview “Fire and Tactics in the Russian Army: Another Look”About Stalin and Khrushchev
Military Reviewin Yandex News
Military Reviewin Google News
32 comments
Information
Dear reader, to leave comments on the publication, you must sign in.