A scout from God: he was the first to find Hitler's lair in Ukraine 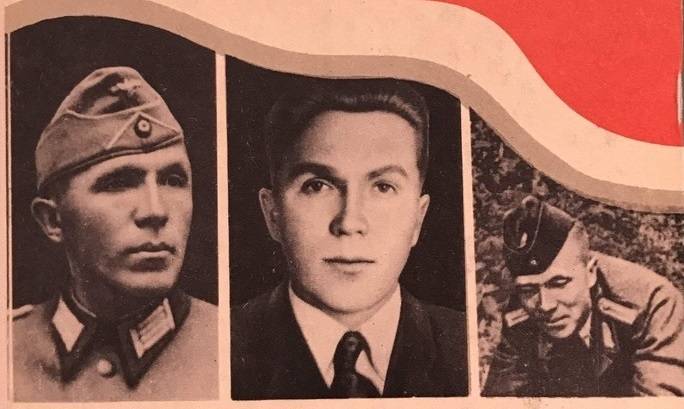 So in the first part "Scout from God: a scalpel to remove a tumor of fascism" we told that Nikolai Kuznetsov was taken to the capital.


He was registered as a secret special agent. But setting it up in Moscow was not so easy.

The fact is that even more senior employees in those years were forced to squeeze in communal rooms. Separate apartments were then allocated only to big bosses. Nevertheless, Nikolai was then "knocked out" of his apartment in Moscow. After all, he was to closely communicate with the employees of the German diplomatic mission in his new job. 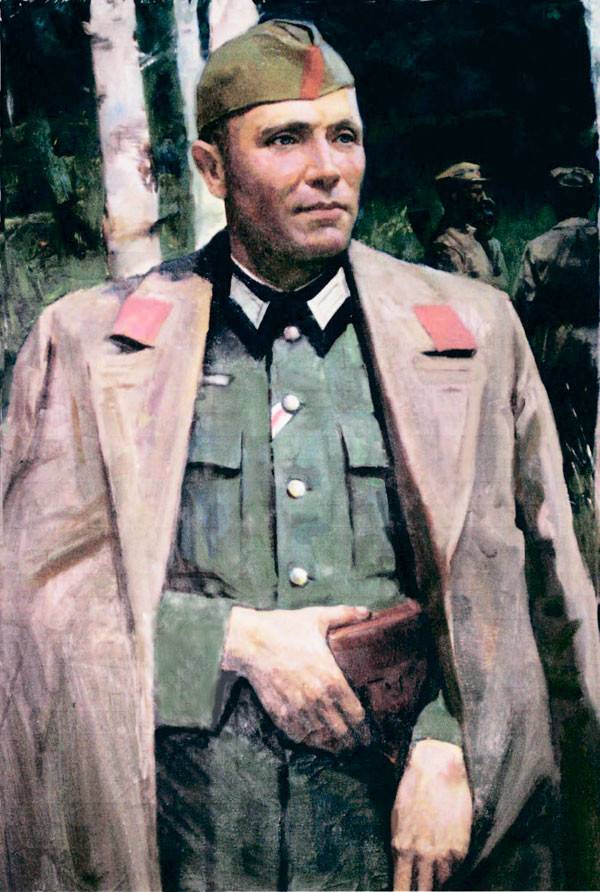 Paul Siebert in the squad. Painting by G. Ponomarenko. Source: smolbattle.ru
But he had such a legend in Moscow: now he rented this apartment as a real German. Someone Rudolf Schmidt. Moreover, this Rudi was born in the German town of Saarbrücken. And when he was two years old, his parents moved with him to the USSR, and then he grew up and went to school.

It was for this German surname that he received a passport. And the rank is senior lieutenant. But in parallel, he was released from service on a certificate of poor health. The civilian profession was given - a test engineer at an aircraft plant.

The colonist grabbed everything on the fly from his Moscow Chekist teachers. And, according to his operators, by the beginning of the war he was the most experienced professional. Why is there - they said about him "a scout from God." 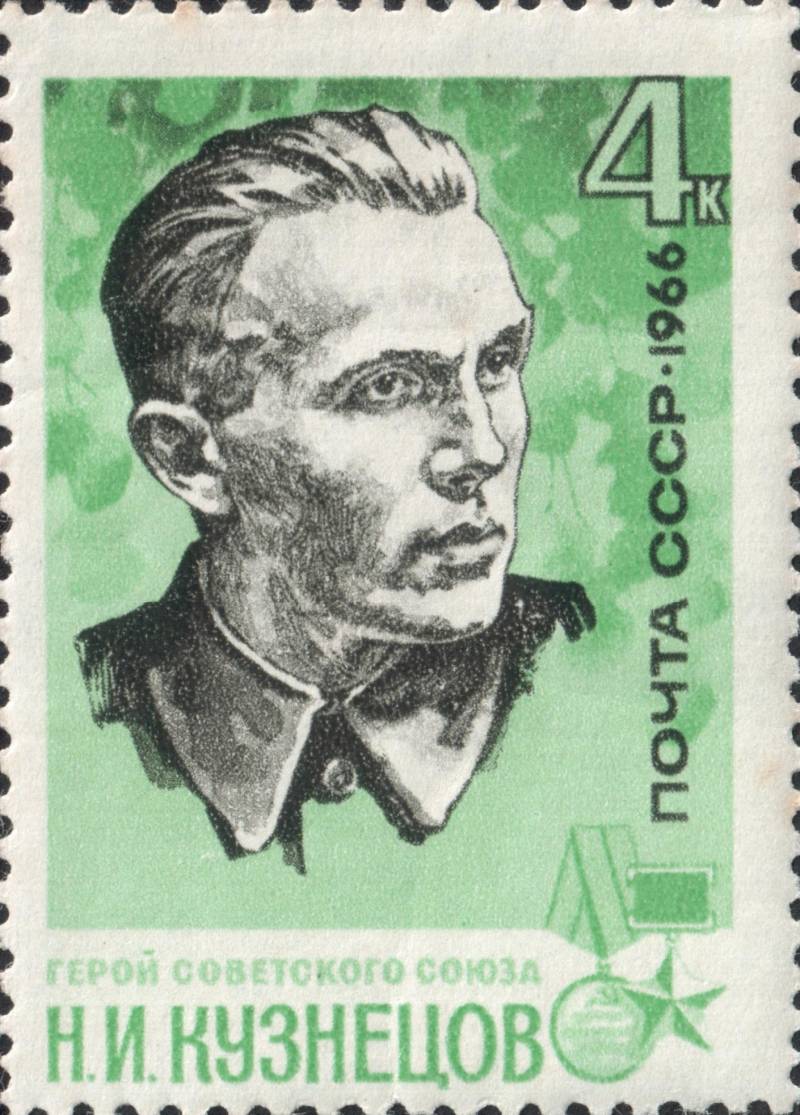 The dirty deeds of German diplomats

It turns out that German diplomats in pre-war Moscow traded in underwear and foreign watches. It was fashionable for this public to buy antiques, icons and jewelry with the money raised. They preferred to take these items from the Russian intelligentsia as heirlooms.

After work, employees of diplomatic missions fled to theaters or in search of available ladies. It was in these places that they thought at first to introduce the Colonist for acquaintances and meetings with German diplomats. To make him feel like a fish in water in a diplomatic environment, tutors were assigned to him. Yes, not any, but from the Bolshoi Theater. It took him to learn good manners, etiquette and give him an elite pronunciation. About a month later, the Colonist became his own in antique shops, theaters and trendy restaurants. 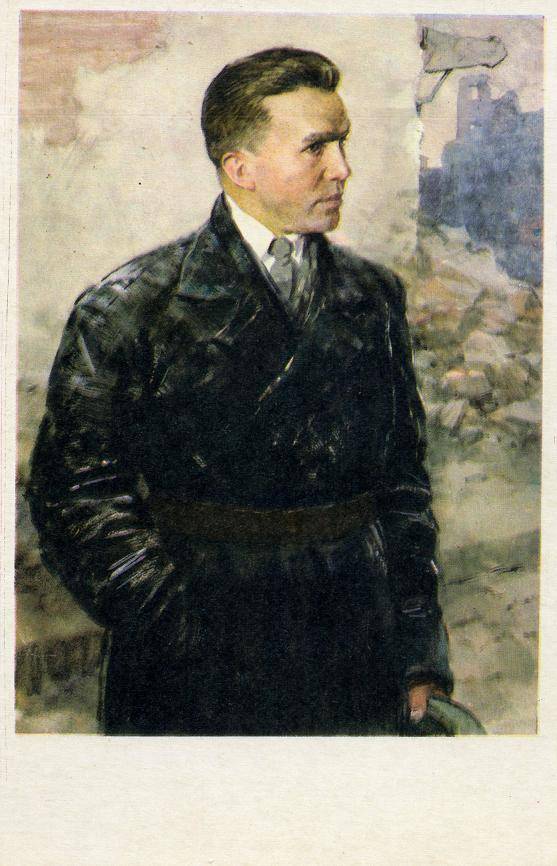 Postcard. Hero of the Soviet Union N.I. Kuznetsov. Moscow, 1972 Source: auction.ru
He was a frequent visitor to Metropol and National. He shone among charming actresses who served as cute baits for foreign diplomats. The colonist made toasts very beautifully under the rivers of champagne. To the tips of the embassy staff, they blurted out information with interest. Soon the Colonist became his own board for the Moscow elite.

Its operator was State Security Major Vasily Ryasnoy (counterintelligence genius). He aimed the Colonist at a jewelry commission in Stoleshnikov Lane. It was known that it was there that German diplomats illegally bargain from under the counter. It was there that it was planned to look for possible sources of information.

So, about six months before the start of the war, Kuznetsov was planned to be sent to work abroad, but the Great Patriotic War violated the plans. Kuznetsov asked to go to the front. But the leadership has developed a new mission for him.

In December 1941, near Moscow, our troops defeated the headquarters of the German unit, where the personal files of the officers who had just been killed, who had not yet been included in the official lists of the dead, survived. The folders were without photographs, but the description of the appearance of one of the Germans almost completely coincided with the appearance of Kuznetsov: eye color, hair, height, leg size and even blood type - exactly the same. Kuznetsov's German twin was named Paul Siebert. General Sudoplatov approved the resurrection of Siebert. 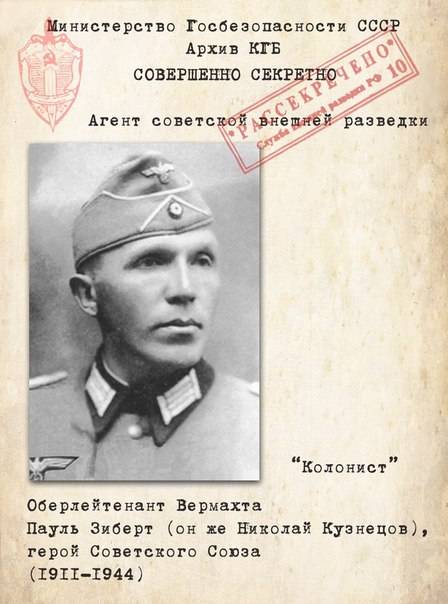 Now our Kuznetsov became the chief lieutenant of the 230th regiment of the 76th infantry division, Paul Wilhelm Siebert. He was a holder of two Iron Crosses and a medal "For the winter campaign to the East." He was wounded on the Eastern Front. In this regard, for the period of restoration, he was listed as an emergency authorized economic command (Wirtschaftskommando) for the use of material resources of the occupied regions of the USSR in the interests of the Wehrmacht. This position made it possible for Kuznetsov to have enough money, move around the occupied zone without hindrance, and visit different offices.

Our experts trained him in details on the organization and composition of the German Armed Forces, regulations, insignia, titles and awards. He watched the most fashionable pre-war German films, and also reread a dozen popular books among German youth of those years. Moreover, for completeness of immersion in Wednesday, Kuznetsov lived for three months in an officer's barracks with German prisoners of war in Krasnogorsk. As a result of special trainings, senior comrades took an exam from Kuznetsov and felt that he was completely ready for a new mission. 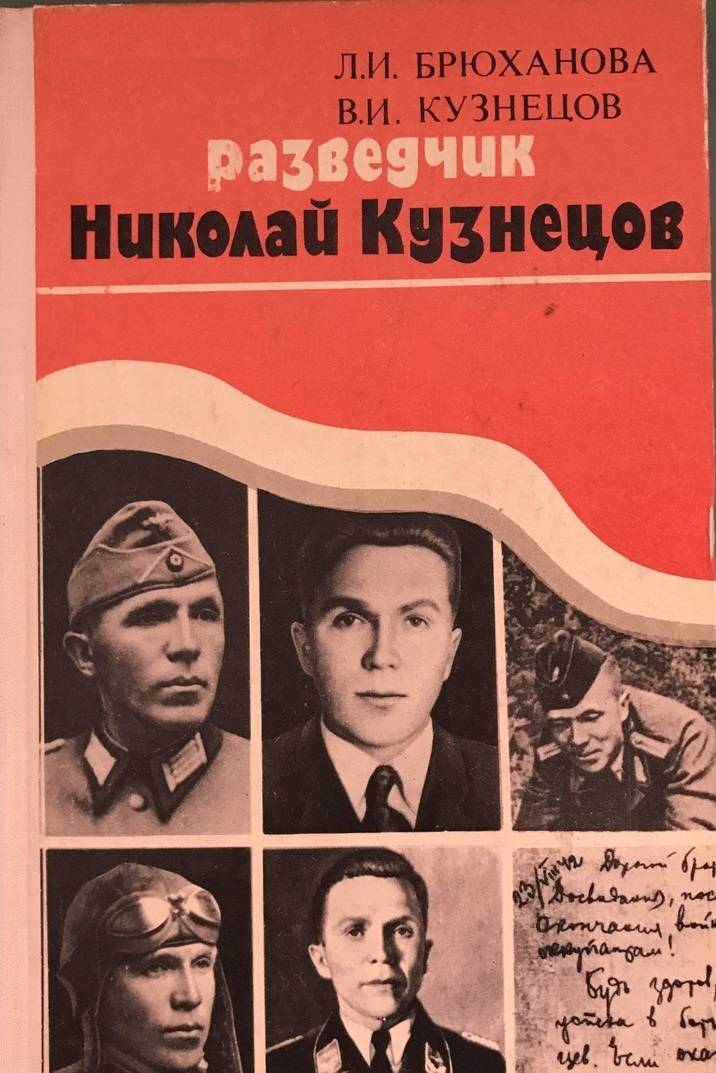 Nikolai Kuznetsov received another name: Nikolai Vasilievich Grachev and the pseudonym Pooh. Under this name, in July, he was enlisted in the special forces detachment "Winners". It was commanded by State Security Captain Dmitry Nikolaevich Medvedev (pseudonym Timofey). In short, the task of Pooh was now to eliminate high-ranking German officials of the Reichskommissariat of Ukraine (RKU).

Kuznetsov was dropped by parachute near Rovno. The Nazis turned this town into the capital of German Ukraine, having concentrated almost 250 offices of the highest military leadership there during the occupation.

He was the first to discover Hitler's secret residence in Ukraine

Pooh analyzed a lot of information. And he concluded that the search for Hitler's lair in Ukraine should not be near Kiev at all, but near Lutsk or Vinnitsa.

He found the reasoning for his version in the local press, which was then published in two languages: in German and Ukrainian. The scout drew attention to a note in the mouthpiece of the Ukrainian nationalists of those years called "Volyn", where it was reported that a performance of the Berlin Opera was organized in Vinnitsa. The event was personally attended by Hermann Goering himself.

And Deutsche Ukrainishetsaitung wrote that Wagner's opera Tannhäuser was brought to the Vinnytsia theater and that the commander of the Wehrmacht, Field Marshal Wilhelm Keitel, had the honor to listen to Wagner that evening in Vinnytsia.

It would seem, for the sake of what German artists dragged themselves into such a Ukrainian hole? Was it really to please Hitler himself, who loved opera? Kuznetsov reasoned something like this. But for him one guess about a special opera tour to Vinnitsa was not enough. More serious leads had to be found before considering Hitler's secret place of permanent residence in Ukraine - Vinnitsa. 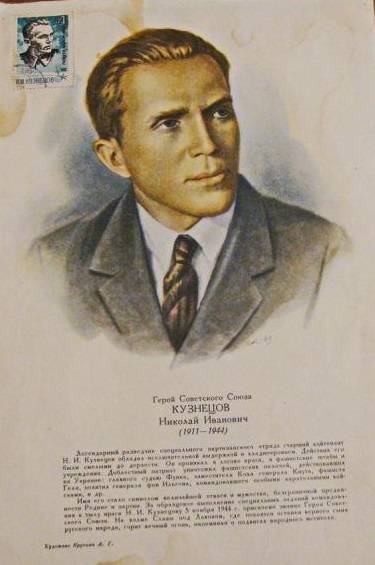 Hero of the Soviet Union N.I. Kuznetsov, 1966. Sheet with a stamp. Source: auction.ru
And here Kuznetsov was helped by his connections among German officials in Ukraine. From his new acquaintances, he learned that the High Commissioner of Ukraine Erich Koch rushed to Vinnitsa. Moreover, Kuznetsov's new friend, SS Sturmbannfuehrer Ulrich von Ortel, went there, too, who, before leaving under the brandy, got into a conversation and blurted out to our Siebert that he would meet with Reichsfuehrer Heinrich Himmler himself. This one was the Fuehrer's shadow. That is, everything spoke in favor of the fact that Hitler's lair was located somewhere near Vinnitsa.

Summarizing the facts and arguments, Kuznetsov laid out everything to Timofey, who agreed that Hitler settled exactly near Vinnitsa. The encryption went to the Center. And already on December 22, 1942, a dozen Soviet bombers bombed Hitler's Ukrainian lair "Werewolf".

In the next part, we will talk about how Kuznetsov's report saved Stalin by warning of the assassination attempt in Tehran, as well as how he saved thousands of lives of Soviet soldiers on the Kursk Bulge with his information. 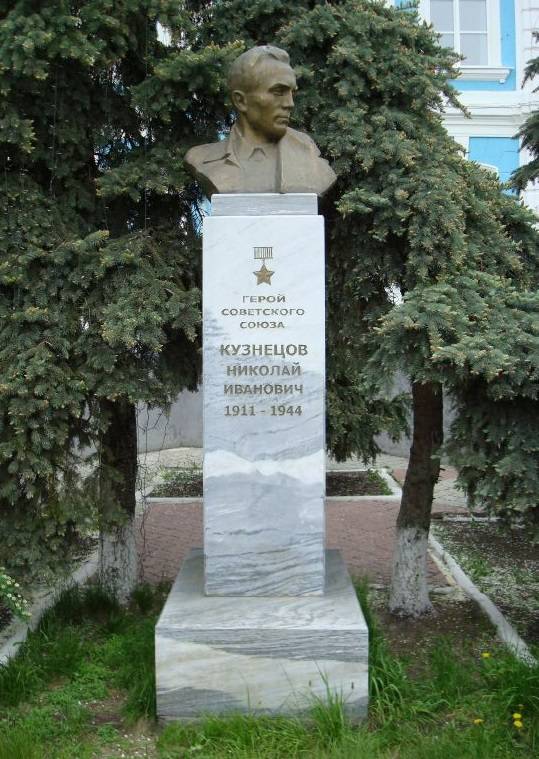 Monument to the scout NI Kuznetsov in Tyumen.
To be continued ...

Ctrl Enter
Noticed oshЫbku Highlight text and press. Ctrl + Enter
We are
He could be Stalin's successor. The secret of the failed appointment of PK Ponomarenko as head of the USSR governmentFather told
Military Reviewin Yandex News
Military Reviewin Google News
25 comments
Information
Dear reader, to leave comments on the publication, you must sign in.