I drag everything into the cockpit! 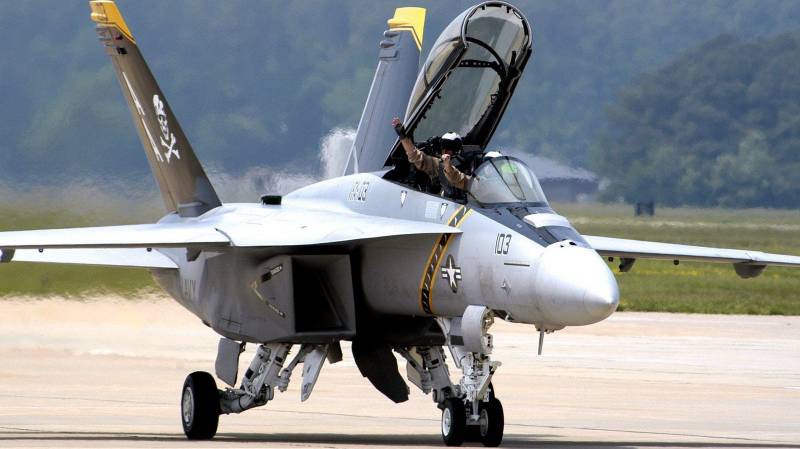 "I carry everything with me." The dictum appeared in ancient Greece, but has not lost its relevance today. This expression means that the most valuable thing a person has is life experience and wisdom, and not material values.


But not in our case.

Today, together with our American colleagues Corey Graff and Dan Kitwoodgetty, we will appreciate what the American pilots of the US Navy are rich in. And what they, in accordance with the ancient saying, carried with them. More precisely, they took it on a flight.

Marine pilots aviation can easily be compared to bikers: they also dress not for riding, but for falling. But the clothes and equipment of military pilots are completely devoid of any show-off; pragmatism and specialization reign here. Pilots' equipment is designed for fire, frost and somersaults on the surface of the water. 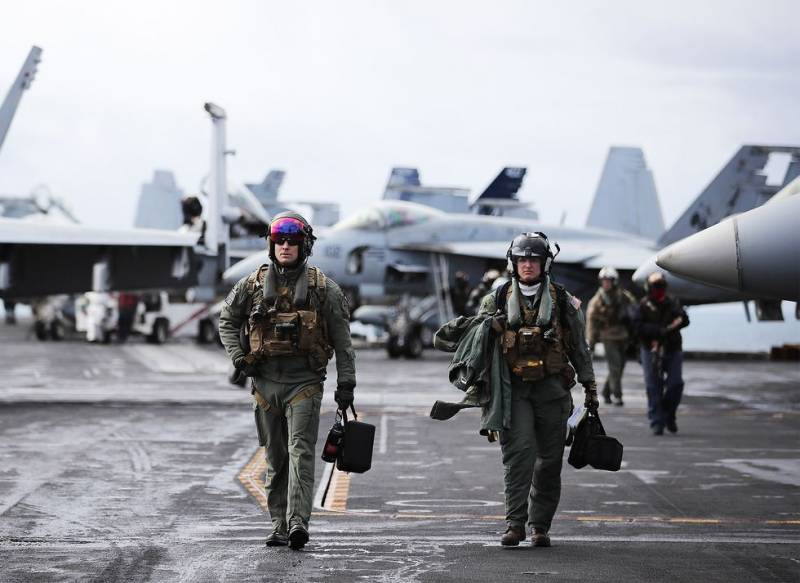 And this is historically so, even the very first deck pilot, the legendary Eugene Eli, as you can see from the photo, was already equipped in his own way in 1911. Helmet, goggles and an impromptu life jacket from motorcycle cameras. 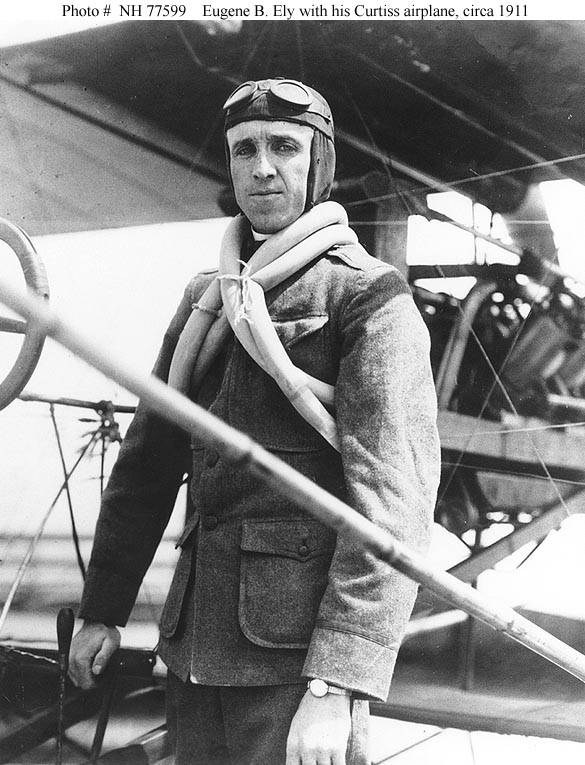 It is clear that 110 years later, everything has changed quite dramatically.

Modern technology, if not exposed to weapons, is quite reliable. According to the Navy, bailouts occur 1,33 times per 100 flight hours. But since the likelihood of an accident still exists, naval pilots still wear and carry equipment for just such a situation.

And here we begin to look at what the US naval pilots are rich in. 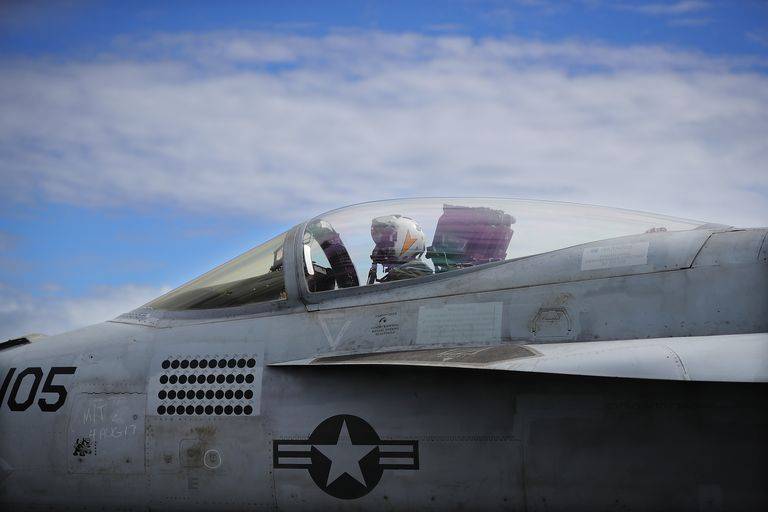 Starting from the inside out, so to speak, it is made of cotton. More precisely, flight crews are provided with 100% cotton underwear. The finest cotton in the world, from the fields of Texas or Mississippi. Very practical and useful, although a little expensive. But in the event of a fire in the cockpit, the cotton will not melt or melt into the skin of the crew member like nylon or polyester.

As expected, pilots wear a CWU 27 / P flight suit made of Nomex fabric over the linen. Developed by DuPont in the 1960s, Nomex is a flame retardant synthetic material that can withstand heat and flash (such as an electrical discharge) up to 752 ° C.

When a Nomex suit is exposed to intense heat, the fibers thicken and carbonize, absorbing thermal energy. Standard color fleet for CWU 27 / P it is sage green, but pilots serving in the Gulf region and in the aggressor's units in the states wear desert tan suits.

The flight suit is a jumpsuit with a zipper in the front. The clasp provides limited fire resistance. The suit is also called "Bag", it is convenient to put on, no need to iron. 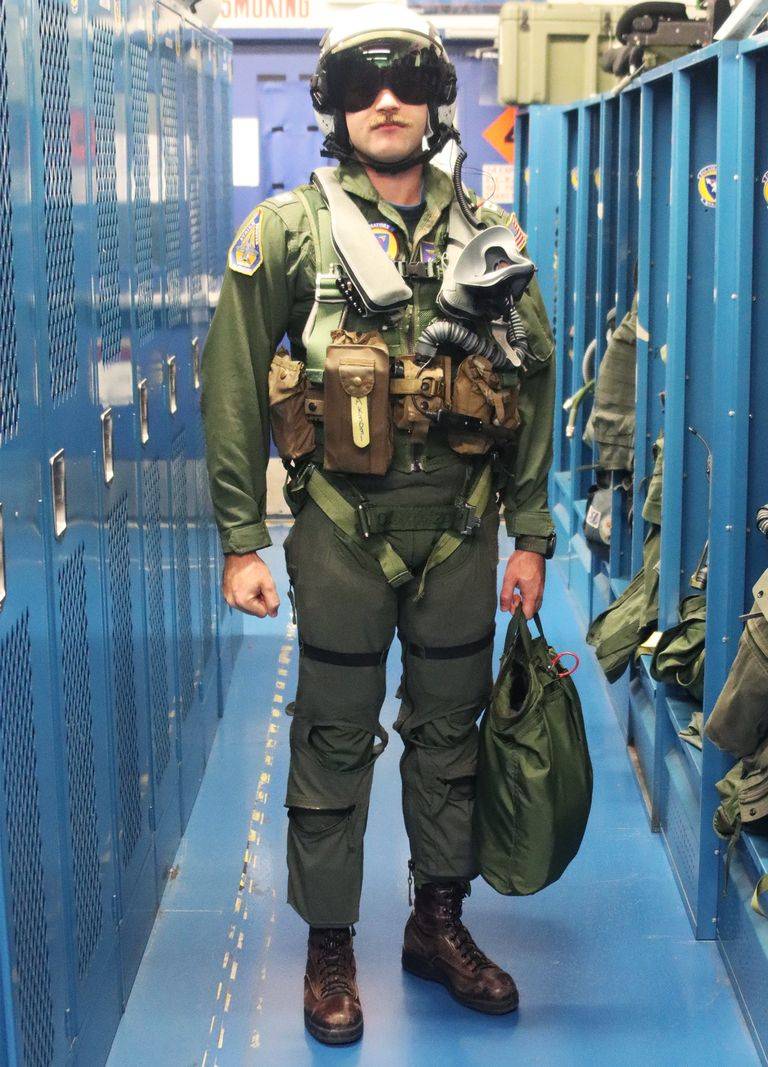 Lined with a bunch of Velcro straps and eight pockets (including one zip pocket with separate pen flap), the flight suit is standard work gear.

Gloves. A separate topic. They are long and also fireproof, GS / FRP-2 gloves, worn under a suit. Velcro cuffs on the jumpsuit help create a snug fit. The gloves, however, were regularly complained about. Pilots cut their fingertips off their gloves to better control touch screens and sensitive cockpit controls, and fingerless gloves tended to fall apart.

But in the military industry, pilots have been heard, and now pilots have Wiley X Aries flight gloves at their disposal. They have open thumb, middle, and forefinger to operate touchpads and screens. 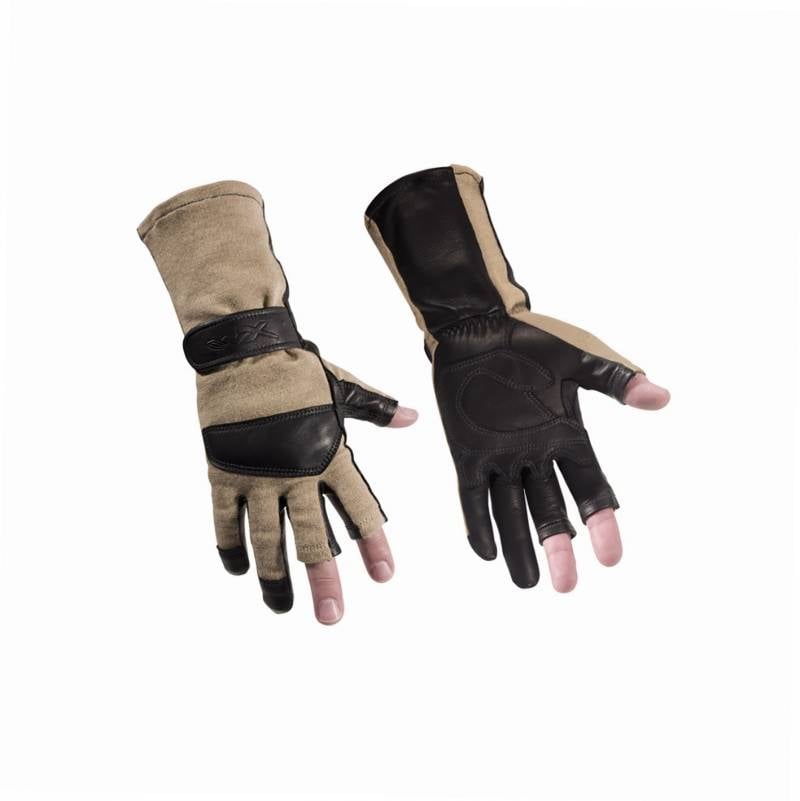 Boots. Also, not everything is simple with them. In general, the deck of an aircraft carrier is somewhat similar to a construction site: there is always a risk that something will fall or roll over your legs while you move yourself with their help.

Therefore, pilots wear navy-issued or personally purchased (but again naval-approved) leather safety boots with steel toes. The steel construction of the sock also protects the pilot's toes from damage during the ejection.

Of course, boots with high ankle boots and additional reinforcement in the ankle area. A military parachute is not a sport for you. The sporty one provides descent at 15 feet (4,6 meters) per second, while its military counterpart at 22 feet (6,7 meters) per second. The boots are required to take over and extinguish most of the energy upon landing.

Naval pilots and flight crews constantly argue about the color of the boots, black or brown. "Black shoe" is usually the guy from the deck who works on the ship. " 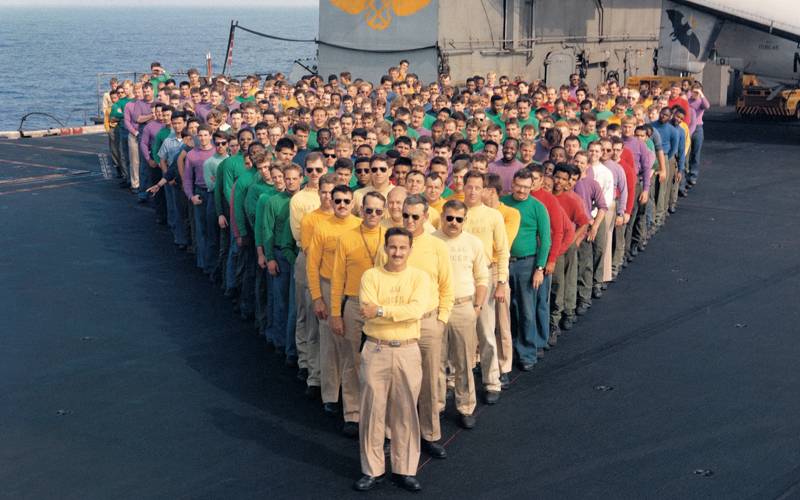 The flight crew prefers brown boots, but today both colors can be seen on pilots.

Over the flight suit, the pilot wears the CSU-15A / P anti-gravity suit, or, as the pilots call it, the G-spacesuit. 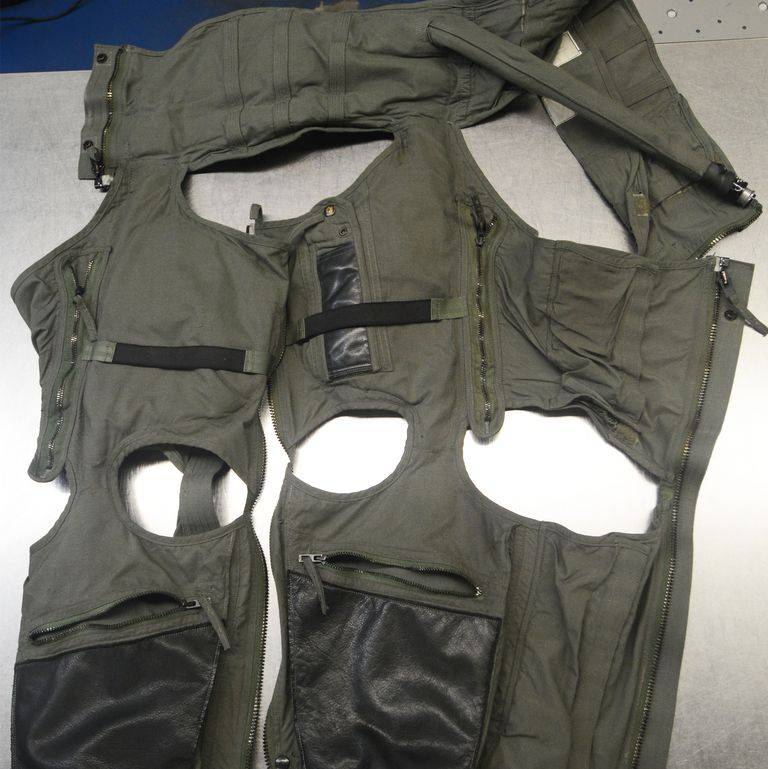 The suit looks intimidating and consists of air and gel inserts that wrap around the pilot's legs and abdomen as acceleration increases, helping to trap blood in the brain during high acceleration maneuvers. Pilots can handle about six times the gravity without wearing a G-suit, but the CSU-15A / P allows a regular F / A-18 pilot to perform 7,6 G maneuvers before experiencing G-force-induced blackouts.

The G-suit is connected to the aircraft pneumatic system through a hose and is equipped with an acceleration-sensitive system that, if necessary, pushes air into the liquid inserts.

The suit starts to inflate at about 3G and fills up completely at any value over 4G. But there is also an additional and very useful function - massage. Pilots can themselves, by pressing the appropriate button, apply and release pressure in the suit.

It is difficult to stretch your legs in the Super Hornet's cockpit, so sometimes massage comes in handy.

On top of the G-suit and flight suit are a combined harness and life jacket, designated PCU-78. A pile of buckles and adjusters, the straps run across the shoulders, around the waist, and across the legs. Pilots are frankly bunching, because the universal suspension is not convenient and cumbersome. 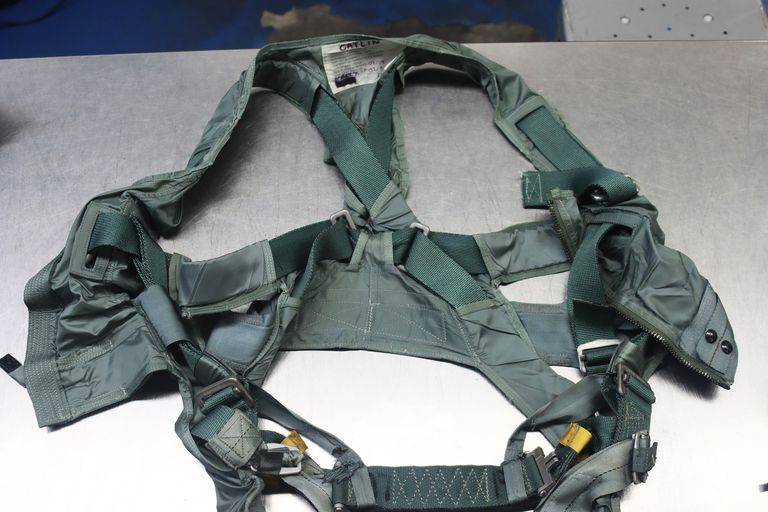 The seat belt is integrated into the PCU-78 and secures the pilot to the aircraft seat at four points. In front, it is attached to the pilot's parachute on both sides of the chest. These parachute mounts are equipped with SEAWARS buckles, which are part of a seawater-activated exhaust system. If the pilot lands in the ocean unconscious after ejection, the system automatically releases the parachute canopy from the pilot upon landing. This prevents the risk of the wind catching the parachute canopy and pulling the pilot through the water, or the parachute sinking and dragging the pilot with it.

In addition, the PCU-78 vest carries a load of rescue equipment, most of which is attached to paracord straps so that it cannot be dropped into the sea. Typical gear might include a Phantom Warrior flashlight, Spyderco folding knife, AN / PRC-149 radio, small water bottle, strobe and flares, as well as a whistle, compass and mirror. Naturally, chocolate, fruit bars and canned food. 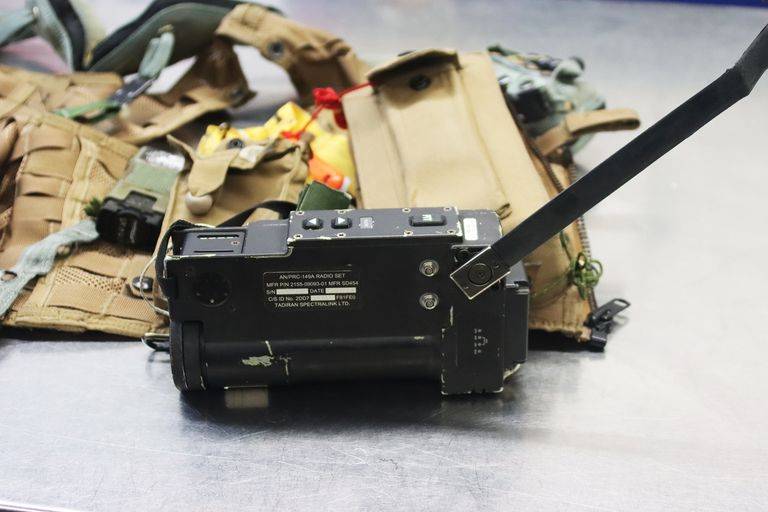 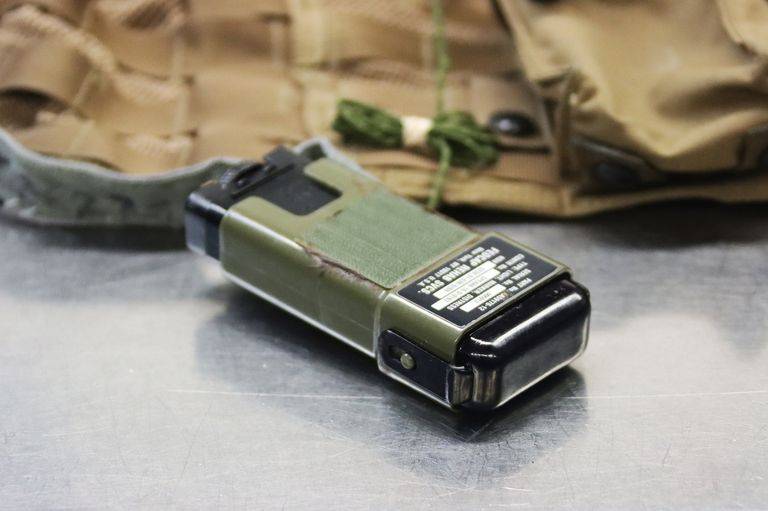 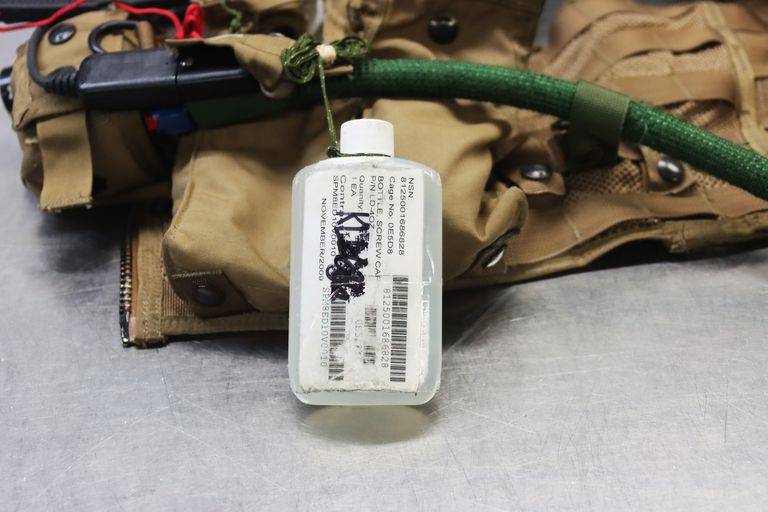 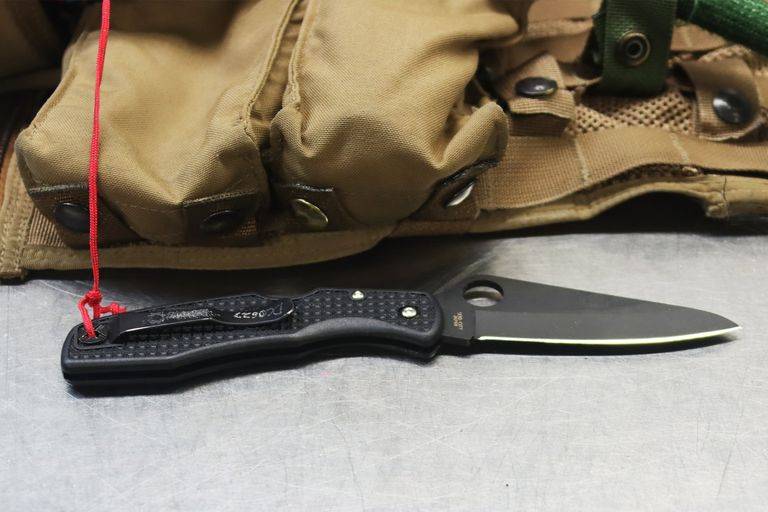 Pilots often customize their equipment according to what they need or what they prefer on a mission. Many take a second knife or an extra water hydrator called a camel bag.

Over the PCU-78, an LPU-36 / P inflatable rescue collar is put on the pilot's neck and attached to the seat belt. Weighing only 3,25 pounds, the collar is rated for 65 pounds of buoyancy. This is more than enough to keep the pilot's upper body above the water, even if unconscious.

The LPU's rescue collar automatically inflates when hitting the water, so that even the unconscious pilot remains above the water. However, even a pilot who jumps off the ground with a parachute may still be ordered to deploy the LPU. An inflated lifesaving device can protect the pilot's face and provide additional head and neck support during a rough landing. 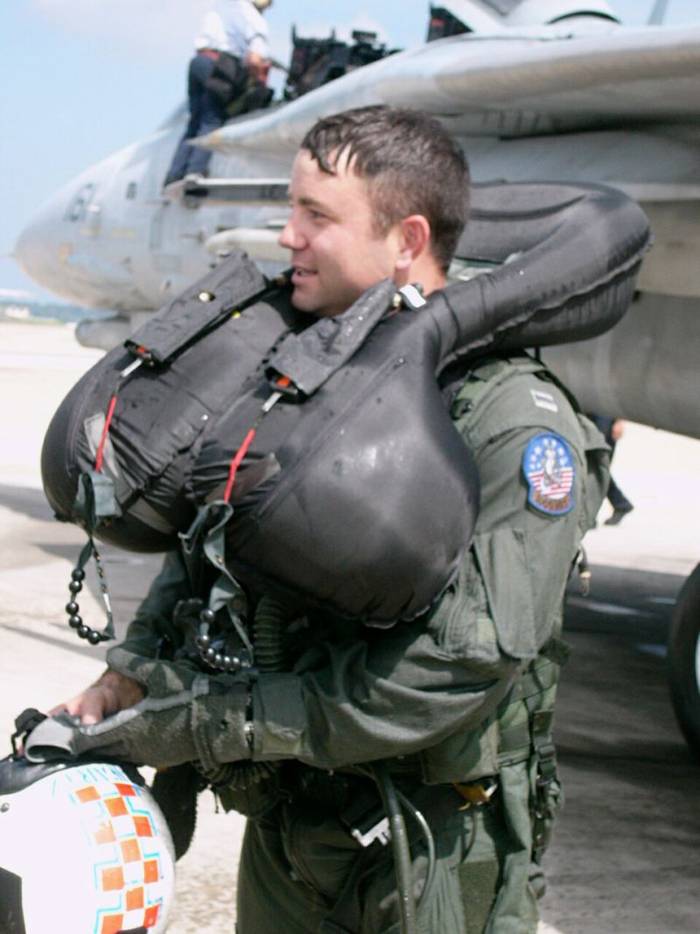 In any case, the neck that the pilot did not break during an emergency landing outside the open field is worth an inflated bag of air.

The standard flight helmet for the navy fighter crew is the HGU-68 / P tactical flight helmet. It carries built-in headphones, a tinted or transparent visor, a chin strap, and a communication pigtail and receiver for connecting to an oxygen mask.

Pilots often wear reflective tape on their helmets if they are to operate at night. Just in case, to make it easier for the rescue team to find themselves at night.

And yes, the callsign usually adorns the back of the pilot's helmet, not the camera-friendly front. No complaints about Top Gun. 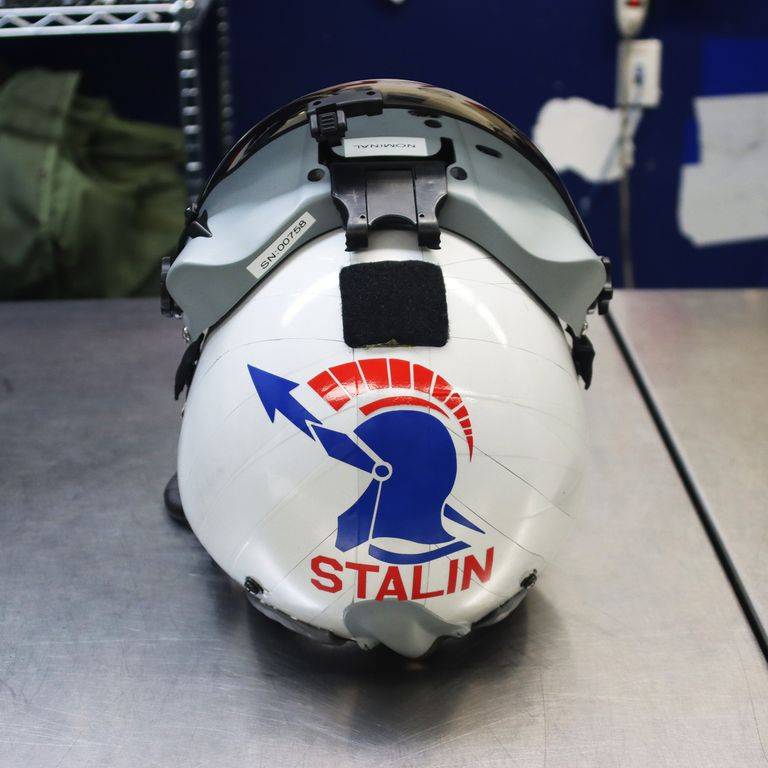 The gray silicone elastic oxygen mask snaps onto the helmet on both sides with bayonet clips. In addition to providing the pilot with breathable air, the mask contains a microphone. A long hose at the front of the mask (called the "elephant trunk") connects to an oxygen regulator that connects to both the oxygen equipment on the plane and a small emergency oxygen cylinder located in the ejection seat.

A final, specific addition to the helmet is the JHMCS, a joint helmet signaling and targeting system. This guidance system allows pilots to direct their Sidewinder missiles in their crosshairs, even during high-G maneuvers. However, the cost of the system - about $ 214 each - is high to become standard. So for the crews of the Super Hornets, this is still an optional phenomenon. 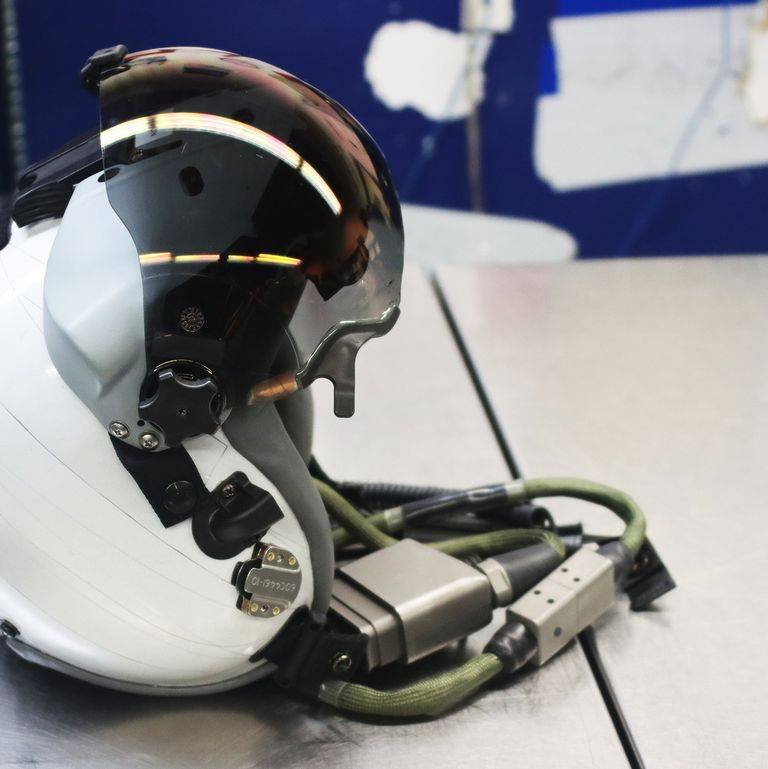 Pilots flying over enemy territory have additional items to lug around, including a survival radio with voice encoder and GPS capabilities, as well as infrared signaling devices that can only be seen by friendly forces. Pilots carry a firearm under these circumstances. weapon... The Navy issues the light, small and compact 9mm Sig-Sauer M11-A1 pistol.

Since World War II, fighter pilots have been famous for their large watches and aviator's goggles. These trends continue today, as evidenced by several popular brands and styles. Various companies supply the Navy with versions of the Aviator HGU-4 / P sunglasses. They have lightweight metal frames and non-polarized glass lenses, and bayonet arms (which extend straight back and don't curve behind the ears) help them fit comfortably under helmets and headphones. These goggles are used by many fighter pilots in the Navy, Marine Corps, and Air Force, especially aviators who use contact lenses. The pilots call them "tricksters."

Sunglasses are very popular with pilots. The main thing is that they should not be polarized, otherwise you may simply not see the screens.

Until recently, the inexpensive, practical and durable Casio G-Shock wristwatch was very popular in the aviation environment. But in 2017, the Navy began offering flight crews a Garmin GPS smartwatch to help pilots better track their physiology during flight. The watch can measure oxygen levels, heart rate, even air pressure in the cabin - all to warn of the onset of hypoxia.

Pilots are allowed to take up to five pounds of personal material with them on the flight, although this is not Formula 1, no one will weigh the pilot. An identity card, wallet, cell phone, a couple of pens and a small notepad are the usual set of a naval aviator. But in hot spots, they prefer to leave their phones on the ship. And some even take off their wedding rings.

Many pilots fly with a lucky charm or memento. A four-leaf clover or a rabbit's foot, no matter how trite it may sound, is the most appropriate size for a cramped cabin.

This is, in fact, what American carrier-based pilots carry with them.