The likelihood of a massive strike by the Tomahawks on the LDNR army corps is still high. Unexpected maneuver of the destroyers "Donald Cook" and "Roosevelt" 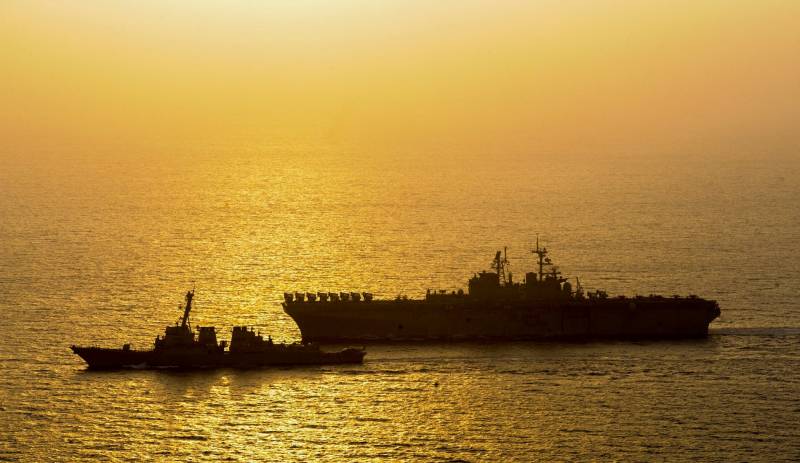 Despite the fact that the telephone conversations between the leaders of the Russian Federation and the United States, Vladimir Putin and Joe Biden, initiated by Washington and held on April 13, 2021, as well as the subsequent decision of the US Navy command to cancel the transition and deployment of DDG destroyers in the Black Sea 75 USS "Donald Cook" served as a reason for domestic observing, journalistic and even some expert communities to express an erroneous opinion about the complete fiasco of the anti-Russian geostrategic concept of the "Washington swamp" in the episode of military-political and diplomatic dives between the parties observed today, a real operational-strategic alignment in the Azov-Black Sea theater of operations, as before, it tends to be complicated with an increasingly pronounced pre-escalation character.


In particular, trying to win precious weeks by conducting partly feigned and useless negotiations between the heads of the national security agencies (the Russian Security Council and the national security agency under the US presidential administration) Nikolai Patrushev and Jacob Sullivan, which discussed the absolutely vague prospect of a constructive meeting between Russian President Vladimir Putin with the current head of the White House Joe Biden, the Pentagon and the European Command of the US Armed Forces only intensified the supply of modern means of electronic / electronic intelligence, protected tactical communications, etc. to the Ukrainian side. by military transport aircraft C-130J "Super Hercules".

The operational and strategic importance of the two Arleigh Burke-class destroyers in the event of an escalation scenario in Donbas. They pose a threat even from the Aegean Sea

It is quite obvious that with these actions Washington only motivated the "hot heads" in the General Staff of the Armed Forces of Ukraine not only to prepare for the implementation of the escalation scenario in the Donbass theater of operations, but also to the possible opening of the Transnistrian-Moldovan front.

This is eloquently evidenced by photographs and videos captured by cameras of mobile devices and video recorders of local residents of Odessa and Ilyichevsk, which capture numerous motorized rifle units, as well as rocket artillery divisions of MLRS 9K51 Grad and batteries / divisions of barrel artillery as part of towed field howitzers D- 30 and ACS 2S1 "Carnation".

According to eyewitnesses, all of the above equipment carried out a redeployment in the direction of the Ukrainian-Dnieper border, while representatives of the defense department and the headquarters of the SBU "Nezalezhnaya" interpreted this redeployment as one of the phases of the "anti-terrorist exercises" that had begun.

Against this background, particular attention is drawn to the information about the sudden termination of the stay at the anchorage in the vicinity of the logistical support point / naval base of the US Navy Souda Bay (Crete) of the URO destroyers DDG-75 USS "Donald Cook" and DDG-80 USS "Roosevelt" and their further transition to the region of the North Aegean Islands (Lemnos, Samothraki and Thassos), closer to the Azov-Black Sea basin.

Indeed, just a few days earlier (April 14, 2021), by order of the White House and the Pentagon, the US Navy decided to cancel the transit of these URO destroyers from the Aegean to the Black Sea, as well as to temporarily abandon their further use as a military tool. political and operational-tactical support of the "square" in the Azov-Black Sea theater of operations, which was argued allegedly

"Washington's desire for long-term de-escalation in the region."
The answer in this situation suggests itself as follows.

In the US Defense Department in general and in the Operations Directorate / Command of the US Navy in Europe in particular, there is still a firm belief that the support of a massive missile attack by the Tomahawk SCRMB for the artillery preparation planned by the General Staff of the Armed Forces of Ukraine on the defenders of Donbass, but will also provide the advancing mechanized brigades of the Armed Forces of Ukraine with the possibility of a lightning-fast breakthrough of the 1st and 2nd lines of defense of the army corps of the LDNR (with access to the Russian-republican border) long before the approach of the regular units of the Russian army.

Considering the fact that the range of the Donald Cook and Roosevelt 112 destroyers included in the ammunition load (the strike configuration of the Arleigh Burke-class UVPU Mk 41 EM is represented by 56 Tomahawk SCRMB) strategic cruise missiles RGM-109E Tomahawk Block IV "is 2400 km, their launch from the region of the North Aegean Islands will provide the ability to strike at the strategically important infrastructure of the army corps of the LDNR, bypassing the ranges of the S-300PM2 / S-400 and S-300V4 anti-aircraft missile divisions, which are on combat duty in the Republic Crimea.

In this case, routes running over Greece, Bulgaria, Romania, Moldova and the central regions of the "Square" (112 km from Crimea, 450 km from the far border of the radius) can be loaded into the inertial navigation blocks of the "order" of 100 "Tomahawks" actions of the S-300V4 air defense system).

Therefore, it is easy to assume that in order to effectively repel such a "star raid" of Tomahawks on the Donbass republics (which can only be carried out at the terminal section of the latter's trajectories), at least two squadrons of Su-30SM / 35 multipurpose fighters or MiG-31BM interceptors equipped with URVV RVV-SD and R-37M, as well as two S-350 Vityaz anti-aircraft missile regiments or S-300V4 air defense missile systems deployed in the Rostov region, capable of intercepting over-the-horizon low-altitude targets, thanks to the use of active radar guidance systems.

At the same time, in order to minimize the response time to low-signature "Tomahawks of the 4th block" (EPR is from 0,07 to 0,1 sq. M), the above-mentioned ground and air-based interception means should receive target designation, as from the over-the-horizon 29B6 "Container" radar ( to accurately determine the azimuthal coordinates of the missile-hazardous direction), and from AWACS A-50U aircraft loitering over the Rostov region and the Kuban.

Therefore, despite the announcement by the head of the Russian defense department Sergei Shoigu, the return of most of the units of the Russian Armed Forces to their places of permanent deployment immediately after conducting operational-strategic exercises in the Western and Southern military districts, there remains an urgent need to preserve significant aviation and the anti-aircraft missile component of the Aerospace Forces, providing cover for the Donetsk and Lugansk People's Republics from quite probable attacks from not only Ukrainian Tochki-U, but also the US Navy.

Ctrl Enter
Noticed oshЫbku Highlight text and press. Ctrl + Enter
We are
USNI News: The Baltic Sea is heating up due to friction between the US, NATO and RussiaSituational analysis of the death of the MH17 flight (Malaysian Boeing 777), made on the basis of engineering analysis from 15.08.2014
Military Reviewin Yandex News
Military Reviewin Google News
238 comments
Information
Dear reader, to leave comments on the publication, you must sign in.