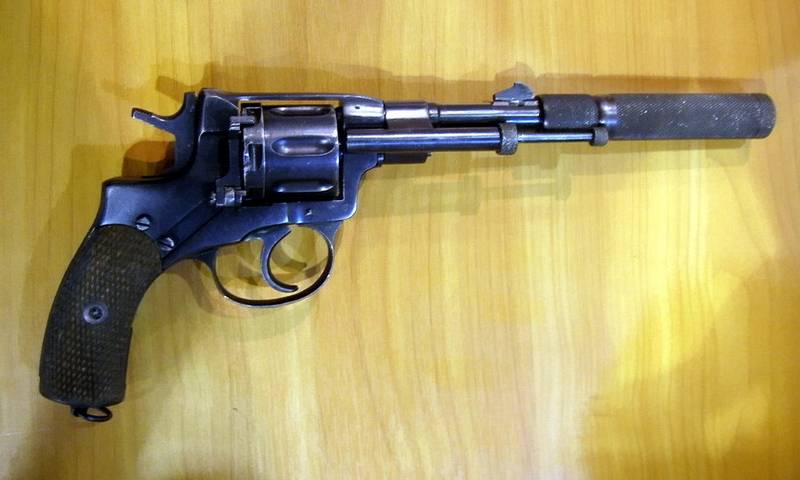 Revolver of the Nagant system with a silencer br. Mitins. Photo Warspot.ru

Since the twenties of the last century, the Soviet military and gunsmiths have shown great interest in the topic of reducing the volume of a shot. They were going to find promising solutions that made it possible to make any available quieter weapon, incl. revolvers. The first solutions of this kind appeared at the end of the decade, and later new projects were developed based on other ideas.

The first domestic design of a silent firing device for a revolver was developed in 1929 by designers V.G. and I.G. Mitin. The BraMit (Mitin Brothers) product was intended for use on a standard Red Army revolver of the Nagant system. In the future, this design was developed and was adapted for use with other weapons, including the Mosin rifle.

"BraMite" sectional view. Graphics Nagant.info
"BraMit" was notable for its sufficient simplicity of design. The main part was a cylindrical body with a length of just over 100 mm and a diameter of approx. 20 mm with a set of internal dividers. On the latter, rubber washers with X-shaped slots were fixed. The device was mounted on the barrel of a revolver; for shooting, a cartridge with a new pointed bullet should be used. Such a bullet could pass through the slot in the washer, leaving powder gases behind.

Silencer br. Mitinykh showed himself well in the tests. He trapped the powder gases and did not allow them to form a sound wave. The movable drum, in turn, eliminated the formation of noise due to the breakthrough of gases through the breech of the barrel. The supersonic bullet remained the only source of noise. 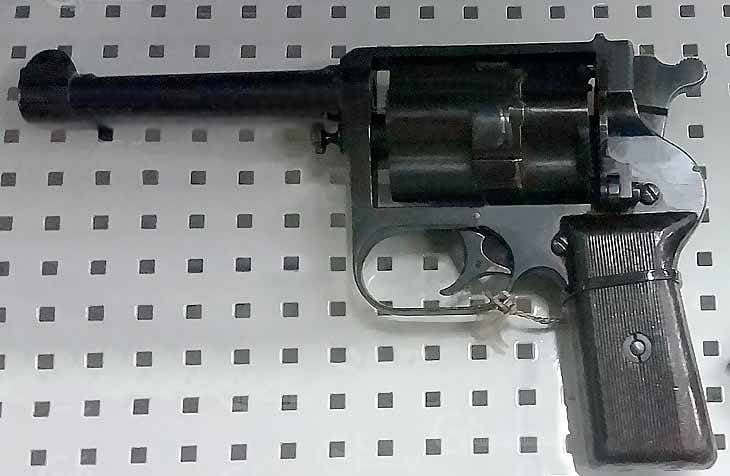 Revolver Gurevich in the museum. Photo Zonwar.ru
Serial production of several BraMit devices for various weapons was launched in the early forties. Quickly enough it was possible to reach high rates of production, and annually the Red Army received several tens of thousands of mufflers. They were very popular with scouts, snipers and partisans. In addition, the enemy showed interest in the BraMites.

For all its advantages, the Mitin brothers' silencer had limited effectiveness and could not make a shot completely silent. The search for alternative solutions led to the emergence of a fundamentally new shooting complex. Design engineer E.S. Gurevich proposed an unusual design of ammunition, and also developed a weapon for it.

The basis of the complex was the "cartridge on the principle of hydraulic transmission." An oversized sleeve contained a powder charge, a piston wad and a bullet. It was proposed to fill the space between the wad and the bullet with liquid. When fired, the powder gases were supposed to push the wad, acting through it on the liquid. The latter was intended to push out a bullet. Having reached the muzzle of the cartridge case, the wad stopped and locked the gases inside. Thus, the Gurevich cartridge was the first domestic ammunition with a gas cutoff brought to testing. 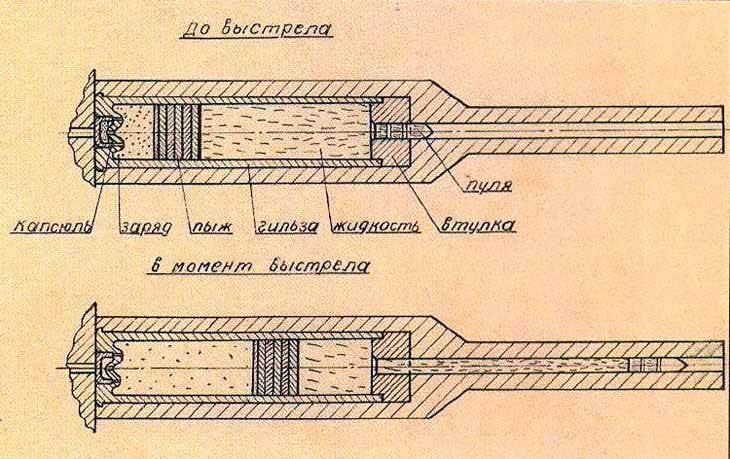 The principle of operation of "hydraulic transmission". Graphics Zonwar.ru
The first were made in metal cartridges with bullets of 5,6 and 6,5 mm. Single-shot pistols of a breakthrough layout were made especially for them. Then there was a 7,62-mm cartridge and a revolver for it. Its characteristic feature was a relatively long drum for five rounds. On tests, together with the revolver, cartridges of three types were used, differing in hinge and pushing fluid. The latter was a mixture of ethanol and glycerin.

Revolver and cartridge E.S. Gurevich passed field tests, incl. with a comparison with the "Nagant". The new weapon showed a number of advantages in key indicators, but did not fully suit the Red Army and needed improvement. Work on improving the revolver continued until the end of World War II, after which it stopped due to lack of interest from the customer.

In the post-war period, a major rearmament of the army and other structures took place, as a result of which the number of "Nagans" in operation was sharply reduced, and their place was taken by new self-loading pistols. As a result, the issue of creating means of silent shooting for revolvers has lost its relevance for several decades. 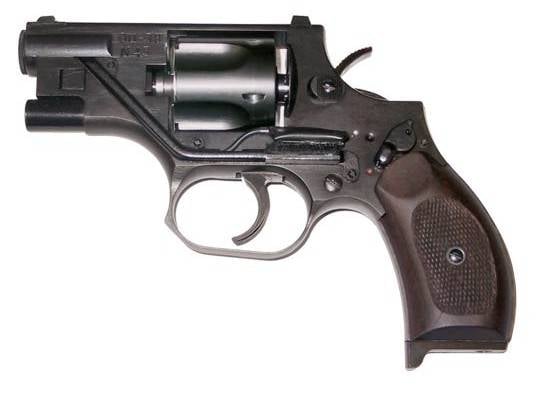 Revolver OTs-38. Photo KBP
Nevertheless, work on the topic of noiselessness did not stop. In the fifties, a new cartridge with a gas cut-off SP-2 was created. In the following decades, several similar samples with different characteristics were developed, as well as weapons for them. The appearance of such ammunition later again led to the appearance of a silent revolver.

A new weapon of this kind was developed only in the late nineties - it was the OTs-38 revolver authored by I.Ya. Stechkin from TsKIB SOO. According to known data, at the turn of the decade, this sample passed all the necessary tests and in 2002 entered service with some structures. The first public display of OTs-38 took place only in 2005 at one of the international exhibitions.

The OTs-38 is a compact weapon chambered for the SP-4 cutoff cartridge. In general, it is similar to other revolvers, but has a few interesting features. The shot is carried out from the lower chamber of the drum, and the barrel is located below. Above the barrel is a built-in laser designator. The trigger is equipped with a double-sided safety catch. The drum for five rounds for reloading is tilted to the right and forward. 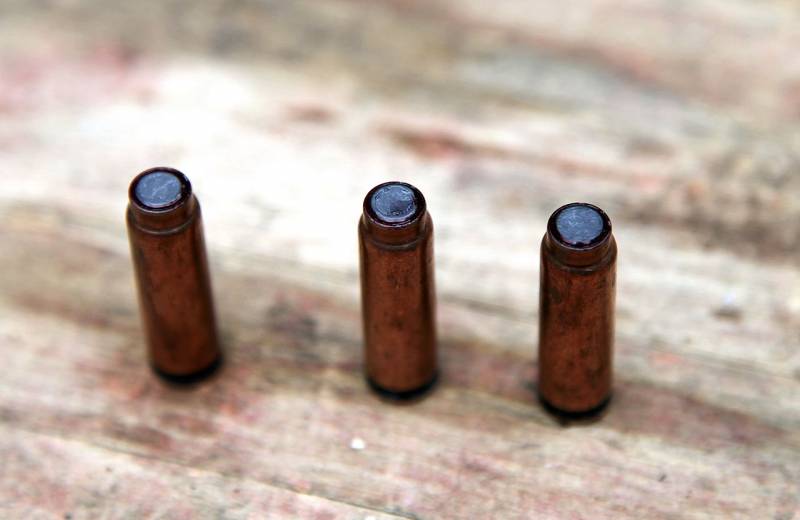 SP-4 cut-off cartridges. Photo Vitalykuzmin.net
The OTs-38 revolver can be carried in the cocked state and the first shot can be fired as quickly as possible. The lower barrel reduces toss and increases accuracy, and the SP-4 cartridge eliminates the formation of noises by the outflowing gases.

Weapons without a future

The advantages and benefits of silent weapons are obvious. For this reason, over the years, new silent complexes and devices have been regularly developed to supplement existing weapons. However, despite all the progress in this area, silent revolvers remain a rather rare class and are not widely used - both in our country and abroad. Self-loading pistols with silencers have become much more popular. 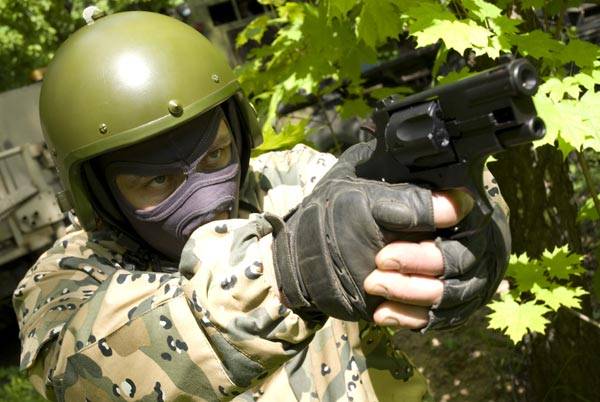 Fighter with OTs-38. Photo KBP
For all the time, only a few silent revolvers have been created in our country, and the last known design appeared after a break of several decades. It is curious that domestic projects, despite their small number, managed to use all the main methods of hiding sound. It all started with a device that excludes the ingress of hot gases into the atmosphere, then moved on to cartridges with a gas cutoff and later improved this idea.

However, the improvement processes did not have a fundamental impact on the issues of the exploitation of weapons. At one time, "Nagans" with "BraMits" were widespread and were actively used by the army and state security, but modern OTs-38 are used extremely limitedly and only by individual structures.

The armed forces and special services preferred special pistols chambered for cut-off cartridges and self-loading systems with an installed silencer to revolvers. Such a weapon turned out to be simpler, more convenient and more reliable. Probably real история silent revolvers in service is nearing completion, and all new projects of this kind will immediately fall into the category of technical curiosities with no future.