"There is no war, but it didn't get any easier": the foreign press discusses Putin's message to the Federal Assembly 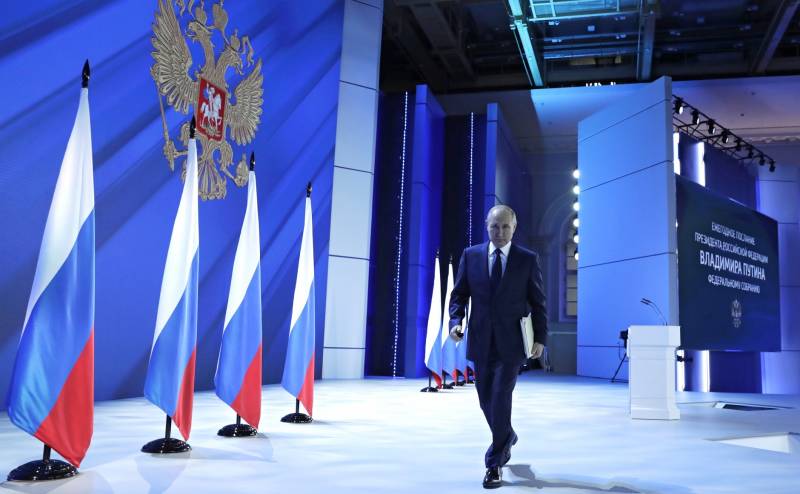 Vladimir Putin's message to the Federal Assembly aroused interest, as it turns out, not only in Russia. The statistics monitoring services noted a surge of interest in the air of the channels broadcasting the speech of the President of Russia from such states as the USA, Ukraine, Germany, Israel, Belarus, Kazakhstan, Czech Republic, China, India.


Attention is drawn to the way foreign media cover Vladimir Putin's speech. At the same time, some foreign authors demonstrate either difficulties with translation, or an outright distortion of the words of the Russian president.

For example, in the Czech Republic, where they followed with special interest the message of the Russian president to the Federal Assembly in connection with the famous diplomatic scandal, they published material in which the author, as Putin himself often puts it, "casts a shadow on the fence." In Denik and CTK, columnist Teresa Polachikova writes that when commenting on foreign policy issues, Vladimir Putin "compared Russia to the terrible tiger Sherkhan from Kipling's Jungle Book." 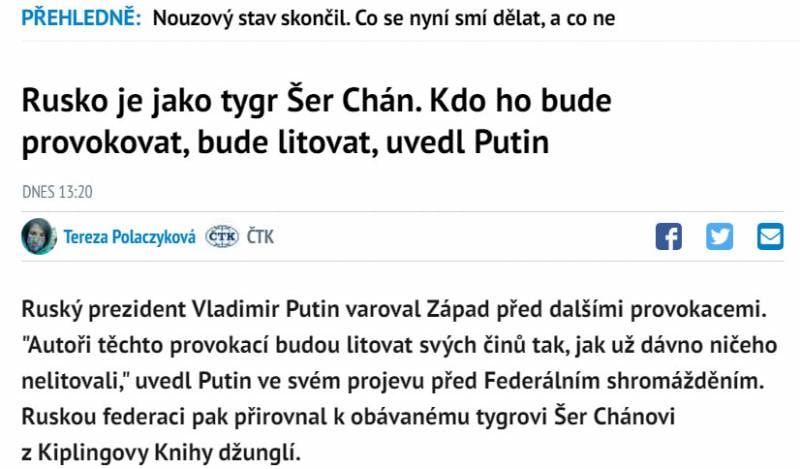 Ms. Polachikova, apparently, was in such a hurry to publish the article that she did not understand the statements of the President of Russia. The Czech observer should take a closer look at Putin's speech in order to understand who exactly he compares with Sherkhan and "howling Tabaki" ...

This mistake alone by the major Czech media speaks of how the Czech Republic approaches the analysis of information. So maybe, at the same time, they will figure out the cause of the explosions at their plant, and will not hang "all the dogs" on Russia.

The German edition Die Zeit focuses on the statement of the Russian president about the "red lines", for which opponents should not step over. Vladimir Putin stressed in his speech that Russia itself would draw these "red lines".

Talking about Putin's message, the authors of the German media "add" the topic related to Navalny. It is stated that on the day of the speech of the President of Russia "there were protests in more than 100 cities of Russia." However, they decided not to post footage from the "protest actions". Apparently, so that the German reader does not know that such actions in a number of cities were attended by no more than three dozen people.

The German press also caused a kind of nervousness by the statement of the President of the Russian Federation that Russia itself will determine where to draw the "red lines". Individual readers also pick up on the nervousness.

Thus, Russia itself will draw the "red lines", and then it will itself say that we stood up for them. This is Putin's logic.
The message of the President of Russia is also being discussed in Poland. The large Polish publication Rzeczpospolita writes that Putin did not say about the war in his message, but that there was no detente. Columnist Jerzy Chaszynski:

There is no war, but it didn’t make it any easier, as the Kremlin still holds half the world in fear.
The Polish analyst's paranoia intensifies:

Putin was saying something important, but ominously vague. The message to the West is simple: I'll show you! But you still don't know how or where.
In the Polish edition, the author writes that Putin made it so that "the West was afraid and hoped that Russian anger would not fall on them."

At the same time, Putin will say, do not dare to impose any sanctions, because Navalny is alive and Tanks they did not move to Ukraine.

Ctrl Enter
Noticed oshЫbku Highlight text and press. Ctrl + Enter
We are
Reports from the militia of New Russia for 27-28 September 2014 of the yearDecember 2010 years. Russian March. Senseless and merciless? Notes not a Russian person
Military Reviewin Yandex News
Military Reviewin Google News
178 comments
Information
Dear reader, to leave comments on the publication, you must sign in.