Afghan virus for the communist bloc 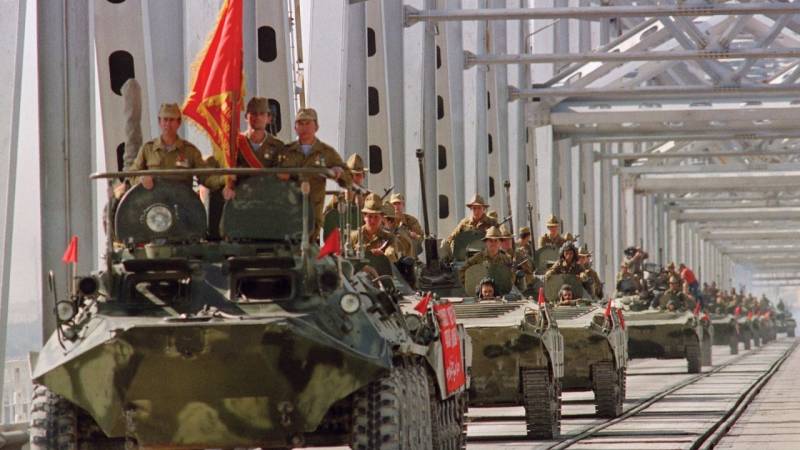 The "Afghan Peace", conditional, of course, was signed on April 14. Soon after the agreements entered into force, in January 89, Soviet troops left Afghanistan. Among the many reasons that led to this, the split in the pro-Soviet bloc is considered not the most significant. Today they generally prefer not to remember him.

However, the signing in Geneva of a package of agreements on a political settlement in Afghanistan did not return the bloc's unity. And it is communist China, as you know, was among the "co-organizers" of all kinds of collective assistance to the Afghan mujahideen.

According to Pakistani and American sources, which no one refutes, the total financial and military-technical assistance of Beijing to the Mujahideen in 1980-1986. reached a third in the total volume of what was received by the anti-Soviet Afghan opposition.

Chinese delegations have constantly initiated discussions at the UN and the UN Security Council, as well as in other international forums, on the "occupation of Afghanistan by Soviet social-imperialism." It is also known that the PRC boycotted the Moscow 80 Olympics, not only because of Moscow's support for the invasion of Vietnamese troops into Cambodia in 1979, but also because of the Afghan factor.

But the PRC also organized its protégés in Afghanistan, who often collaborated with the mujahideen in a number of operations against Soviet troops. It was the Stalinist-Maoist Organization for the Revolutionary Liberation of Afghanistan (OROA), secretly created back in 1973 in Kabul. 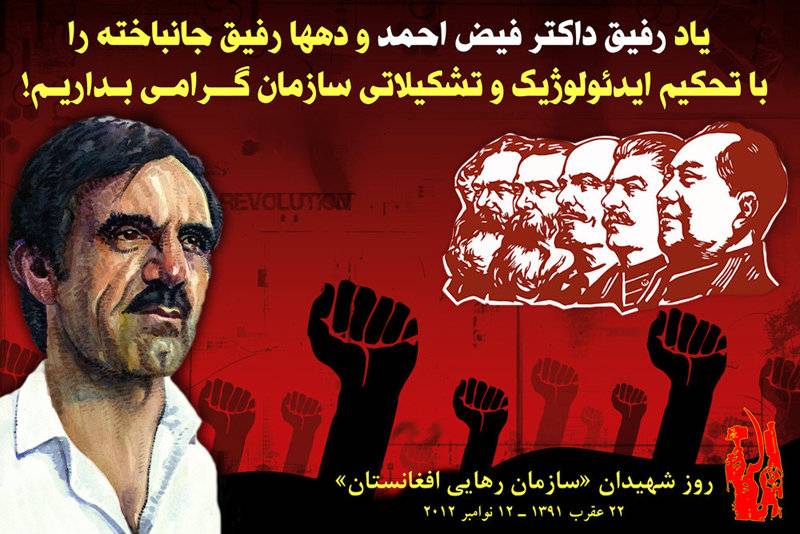 It still exists today, sometimes interacting with the Taliban (banned in the Russian Federation) or with its opponents - now in terrorist attacks against US troops and the Kabul government. Although the official political position of the OROA excludes even a tactical partnership with anyone in Afghanistan.

Albania Enevra Hoxha also helped in the 70s - mid 80s of the OROA. But this organization has long had no illusions about its massive support from the local population. So, in the statement of the OPOA dated October 21, 2001, it is noted that

“The situation in the country is fundamentally different from 1979, when Soviet social-imperialism undertook a direct invasion of Afghanistan. The possibility of a war of resistance and a massive uprising against the United States and its allies seems extremely remote and almost unrealistic. Our country is now a bloody battlefield between world and regional powers. At one time, America and its allies took advantage of this opportunity to drag the now extinct Soviet Union into the war, and subsequently split it into pieces. "
And a month earlier, the OROA called for the collective overthrow of regimes in almost all "main" Islamic countries:

“Our organization, which has been fighting against the dirty religious creatures of the USA, Iran, Pakistan and a number of other Islamic countries for many years, will continue to fight against the Taliban and other reactionary gangs. The liberation of Afghanistan is impossible until the structures dependent on Pakistan and the criminal regimes of Iran, Saudi Arabia and others are overthrown. "
The founder of this organization, publicist and historian Faiz Ahmad (1946-1986) and a number of his associates were killed on November 12, 1986 by the group of Gulbeddin Hekmatyar. The new leadership of the organization, like it itself, according to a number of data, continues to receive assistance from the PRC. Having, as before, their military formations. But for obvious reasons, now in Beijing this support is not advertised.

The condemnation of the USSR for the Afghan adventure united very many, and cemented such alliances that seemed to someone simply ephemeral. So, Romania, the GDR and the PRC made up a trio, which with its unity surpassed, not only the Big Three during the war, but also the earlier Entente.

The Romanian delegation to the UN is the only one of the delegations of the pro-Soviet socialist countries that did not "keep silent" when the West, China, Albania, Islamic countries condemned the Soviet policy in Afghanistan at the UN. The Romanians quite demonstratively refused to participate in a series of meetings of the Soviet delegation and representatives of pro-Soviet socialist countries in the UN to jointly rebuff the positions of the opposing countries on the Afghan issue.

Moreover, Bucharest out of the blue rejected Moscow's proposed draft of a joint statement by the Warsaw Pact countries, Cuba and Vietnam on support for the Soviet invasion of Afghanistan. Moscow immediately abandoned the idea of ​​joint "approvals" on Afghanistan, remembering what a scandal the official protest against Nicolae Ceausescu about Operation Danube - the introduction of troops into Czechoslovakia in 1968 - turned into a scandal. 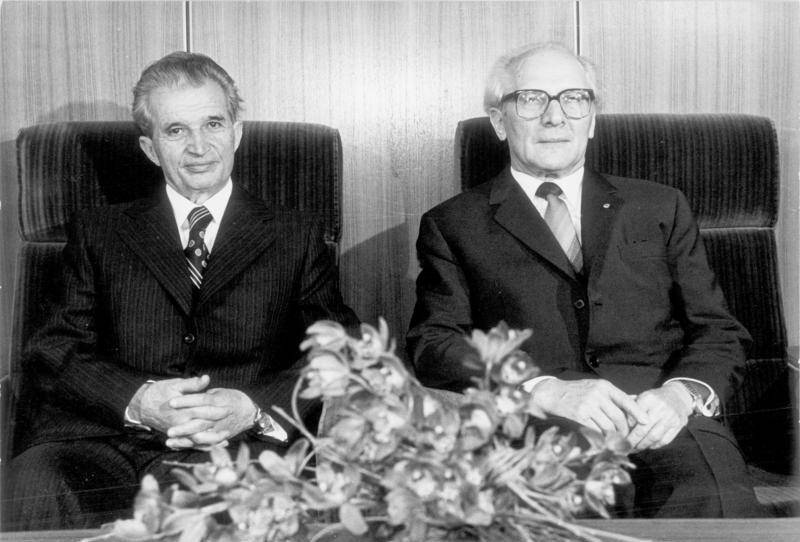 The leaders of Romania and the GDR N. Ceausescu and E. Honecker agreed on many things behind the backs of their Soviet colleagues
As for the position of the GDR, it actually closed in with the Romanian one. According to the historian and political scientist Harald Wessel, published in the "Frankfurter Allgemeine Zeitung" on December 27, 2001, since the operation in Afghanistan, Moscow's allies

“We were informed after the fact, this was perceived even by the most loyal friends of the USSR as an unbearable insult. Accordingly, Erich Honecker also had a "sour" look.

“I will not betray any secret in our circle,” Honecker said on November 17, 1988 in Berlin to his Romanian colleague Nicolae Ceausescu, “that from the very beginning I took a negative position on how the problem of Afghanistan was solved.

- I was immediately skeptical about the path that Afghanistan was set on. This is recorded. If asked, we would not advise.

Honecker's point of view regarding the Soviet invasion of Afghanistan in 1979 is true: there is evidence and evidence of this. "
The position of the GDR was soon embodied quite concretely:

“When, from May 19 to May 21, 1982, Babrak Karmal (the head of Afghanistan in the early 80s) was on an official visit to the GDR and asked for a gas turbine, Afghanistan supplied natural gas to the Soviet Union (to Uzbekistan and Turkmenistan since 1973 - Approx. VO) - Honecker sharply retorted: unfortunately, a gas pipeline has not yet been laid between Kabul and Berlin, the turbine had to be bought for foreign currency in the West. And so he says literally: "You do not have, and we do not have dollars." There were no special actions of "solidarity" in support of pro-Soviet Afghanistan in the GDR. "
Taking into account the positions of Romania, the GDR and the PRC on Afghanistan, the USSR had, let's say, to prepare for a retreat. Moreover, the number of countries that voted for the UN resolution of January 14, 1980 condemning the Soviet invasion increased from 104 in 1980 (out of 155 UN member states) to 125 later (out of 169 member countries). 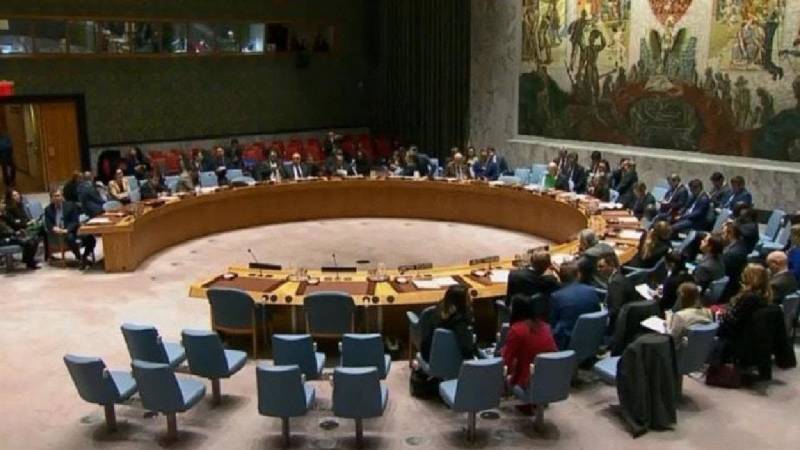 Both socialists and Islamists

At the same time, there were no more than twenty countries that supported the Soviet veto on this resolution. It is characteristic that, along with Romania, they did not support the Soviet position, abstaining from voting on the resolution, and countries friendly to the USSR, such as India, Islamic Bangladesh, Algeria, Iraq and Libya, as well as the socialist DPRK, Nicaragua, Laos and Yugoslavia. It is no less characteristic that Iran and Turkey were among those who condemned the entry of troops, including to the UN.

It is well known that since the early 80s Beijing's position on Soviet-Chinese relations has become less rigid ideologically, but more harsh and even pro-American in foreign policy. Chinese historian and political scientist Lu Xiaoying notes in his study "Foreign policy of the USSR-Russia: from confrontation to normalization of interstate relations with China: 1976-1996":

“For the first time, the thesis about the foreign policy“ three obstacles ”on the way to improving the Soviet-Chinese relations was officially expressed by the Chinese side during the conversation of the Chairman of the Military Council of the PRC Deng Xiaoping with the General Secretary of the Central Committee of the Communist Party of Romania N. Ceausescu (in Beijing in 1982 - Note . IN). Deng Xiaoping asked N. Ceausescu to convey to Leonid Brezhnev that the Chinese side "expects real actions from the USSR" - such as the withdrawal of Soviet military contingents stationed in the territory of the Mongolian People's Republic; termination of the Soviet Union's support for "armed provocations of the Mongolian People's Republic on the borders of Mongolia and the People's Republic of China"; an end to the "aggression of Vietnam in Kampuchea"; withdrawal of Soviet troops from Afghanistan ”.
At least with regard to Afghanistan, Moscow had to concede over time ...

Ctrl Enter
Noticed oshЫbku Highlight text and press. Ctrl + Enter
We are
Chernobyl notebook. Part of 3Diplomats of the People's Commissariat of Defense: on the eve and during the war
Military Reviewin Yandex News
Military Reviewin Google News
21 comment
Ad