Barack Obama and the Guantanamo barracks

August 29 2012
20
Speaking about the recent recent democratic victories of the West, about the desire of many of our compatriots to finally find themselves in the friendly embraces of this very western democracy, one should not forget about such a pillar of the principles of “humanism and democracy” as Guantanamo prison. This is a camp for people accused by the American authorities of aiding the terrorist community. The camp, located on the territory of the US naval base in Cuba, celebrated its 10 anniversary this year. 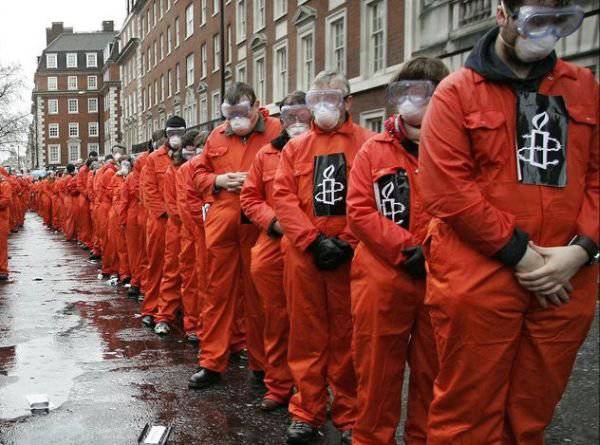 Surprisingly, the western justice system, which many human rights activists cite as an object to follow, gave a huge failure in the form of a prison in Guantanamo. This is a place where people are thrown out without trial, turning a blind eye to the fundamental legal principle of the presumption of innocence. If we take into account the fact that to get into Guantanamo as a prisoner, it is enough that any representative of the American military command considers a person a terrorist or gives him the status of an accomplice of terrorist brigades, then only one thought comes to mind: the Guantanamo camp is a classic example the concentration camp of modernity. As you know, Nazi criminals who gave orders to create concentration camps in the 30-40-s of the last century, called such camps either labor or educational. The phrase "death camp", for obvious reasons, was not used. It was not used then - in fascist Germany, it is not used even now - in “democratic” America.

One of the slogans of the current US President Barack Obama during his first election campaign was the slogan of the immediate closure of the Guantanamo prison. According to him, if he is elected president, the prison will be closed within the next year. Obama, as we all know, won the election and took office in January 2009. The new president did put his signature on the prison liquidation document. It would seem that hundreds of prisoners of the American concentration camp in Cuba will finally be released, or at least they will be subjected to a civilized trial. However, here Western democracy allowed another landmark puncture. It turns out that presidential decrees in the United States of America are only advisory in nature. The decree was taken by the real authorities in the USA to take note, but they did not even hurry to carry it out, but put it into a long, long drawer in which it is kept to this day. Surprisingly, Obama himself apparently does not feel any discomfort about this: well, they did not follow the instructions of the president, and all right ... Over time, the topic of closing the Guantanamo prison in the United States began to be overwritten.

But if the official authorities, as befits the authorities of a truly democratic state, stopped paying attention to the observance of human rights in their country, then there were other people who reminded these authorities about the suspicious cheapness of their (authorities) promises.

This public explosion caused the information that even after the instructions about the dissolution of the prison by Barack Obama in Guantanamo continued torture and mockery of prisoners. Already in 2009, Qatar’s Al-Jazeera television station made a big fuss, publishing an interview with Mohammed al-Garani. This 21-year-old (at that time) citizen of the African Republic of Chad, using one of Guantanamo's few rights - the right to a phone call, managed to convey to Al-Jazeera journalists information about the torture by the American prison guards. Naturally, many questions arise here, how did the prison staff allow al-Garani to contact Al-Jazeera, how could he even know the phone number of the Qatari TV channel? Prison staff stated that democratic principles were also observed in prison, and everyone can contact their relatives on the phone every day, and the conversation is not controlled by anyone ... But many American lawyers, in particular, Eric Montalvo, have their own opinion on this. He believes that Garani was able to contact Al-Jazeera, because corruption is rampant in Guantanamo: in order to promise a big sum for certain benefits, the prison guards are ready to divide prisoners into peculiar castes. Garani in this connection was among those who got access to an important call. I wonder what the warden got in exchange for the opportunity of Al-Jazeera to interview Garani? ..

From the words of al-Garani, who, by the way, was imprisoned in Guntanamo prison in 14 years of age on charges of complicity with terrorist groups, it followed that in the American prison violence in the most sophisticated forms of torture flourished. One of the most common forms in Guantanamo is torture by sound. To do this, use certain music tracks that scroll for several hours in a row at maximum volume. Initially, the songs of the bands Metallica and Drowning Pool were “broadcast” in Guantanamo prison, and then it seemed to someone that they needed to find a more sophisticated version. Such an option was found: since 2010, in prison, they used music for the famous children's TV show “Sesame Street”. This track can be played around 15-18 hours a day, which, naturally, has a very negative effect on the psyche of prisoners, who turn into the most real zombies who are not able to control their emotions. After using the "musical impact", prisoners are interrogated in order to obtain information about participation in gang formations.

When information about this got into the Western press, the author of the music for Sesame Street, Chris Cerf, was simply horrified. According to him, he could not even think that his musical work, which should sow grains of kindness and joy, is used as a humiliation over people. No matter what kind of monstrous crimes a person is accused of, without a trial, to mock at him is the very real barbarity, the composer says.

Today, the prisoners of Guantanamo are 168 prisoners, many of whom have been awaiting trial and sentence for several years. However, the statistics of Guantanamo says that the case of only one of the fifty prisoners really comes to court, and the fate of the rest remains in the hands of the ideological inspirers of the continued operation of the concentration camp at the American military base.

Not only human rights activists and representatives of public organizations, but also quite influential politicians have appealed and continue to appeal to close the prison to the American authorities. In particular, at the beginning of this year, EU European Commissioner for Internal Affairs, Mrs. Malmstrom, urged Obama to immediately show the will and close, as she put it, the shameful American prison in Cuba.

Many representatives of the officer corps of Guantanamo Prison today say that all the stories about torture and harassment of prisoners here are pure fiction. However, then it is not clear what to do with the numerous photo-testimonies of how the US military conducts their “educational work” in prison, with video materials that are published on the Web. Photos of torture by sensory deprivation, when with the help of certain devices certain human senses are deprived of external influence, they have spread all over the world, showing the true face of modern Western justice. If this is fiction, then what about the direct testimony of CIA officers, who did not deny the use of “special methods” to influence prisoners in Guantanamo. One of such “special methods” is the use of psychotropic substances, with the help of which the necessary evidence was obtained from the prisoners. By the way, the American justice system announced that the testimony obtained in this way can be used in court proceedings ...

Moreover, one of the judges, who considered the claims of several former prisoners of Guantanamo Prison, used a unique argument in his verdict. Former prisoners accused the US authorities of violating international law regarding the content of prisoners of war. However, Judge Brian Boyle said that former prisoners in general do not have the right to dispute their options in the American prison, as they had the status of “enemy military”, but you cannot call them prisoners of war. You must admit that the logic is worthy of the most democratic judicial system in the world. What, according to the logic of Judge Boyle, is an “enemy military” captured by American soldiers different from a prisoner of war? Apparently, Judge Boyle himself will not answer this question.

It turns out that all attempts to impose their norms around the world by certain forces in the United States should be viewed only through the prism of Guantanamo Prison. Apparently, for a long time it will continue to remain a man-made symbol of the “ideal Western democracy.
US continues to torture Guantanamo prisoners