Against the background of others: the promising French aircraft carrier PANG and its capabilities 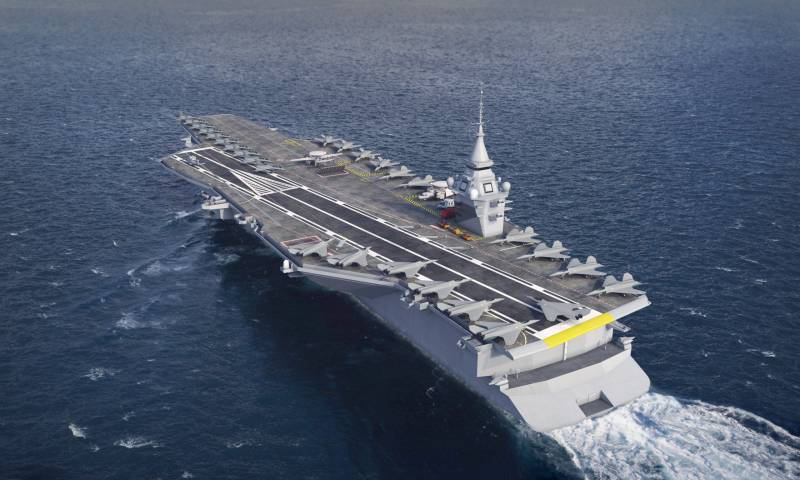 Evolution of the concept

In April, the French Ministry of Defense presented new information about a promising aircraft carrier for the French Navy, designated Porte Avion Nouvelle Generation or PANG. It must be said that this ship has been successfully "forgotten" in recent months. However, first things first.

The start of the practical implementation of the program aimed at creating a replacement for the only French aircraft carrier Charles de Gaulle became known in December. This was announced by Emmanuel Macron. Even then, images of the new ship were presented, which gave a general idea of ​​what it would be like. It was clear that we are talking about what is now, with an eye to the US Navy, called the "supercarrier". That is, an incomparably more powerful ship than the aforementioned Charles de Gaulle. As it was reported then, the total displacement of the PANG will be about 75 thousand tons (against 42 thousand tons for the old aircraft carrier). 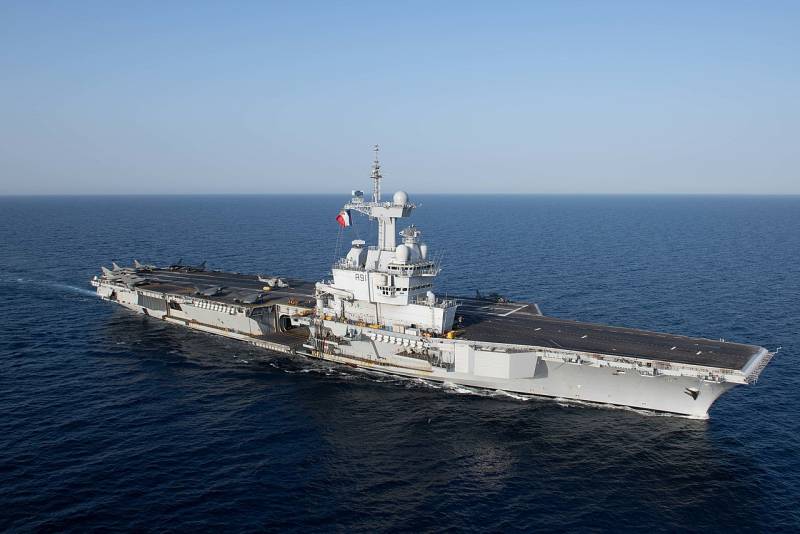 Photo: Joshua L. Leonard, wikipedia.org
It will be up to 300 meters long and about 80 meters wide. Porte Avion Nouvelle Generation will receive two new type K22 nuclear reactors with a thermal capacity of 220 MW each and three shaft lines with a total capacity of 80 MW, with propellers. The total generated capacity, including power generation, will be 110 MW. The ship will be able to reach speeds of 26-27 knots. He will receive American aviation equipment: three EMALS electromagnetic catapults and AAG aerofinishers of General Atomics corporation.

According to the new data, the displacement of the PANG will be 70 tons. As noted recently in the French Ministry of Defense, it will provide up to 000 sorties per day and have a stock of ammunition for a week for high-intensity operations. The crew will include 60 crew members, as well as 1100 people from the air wing.

As noted in December, the aircraft carrier will receive a hangar of approximately 5000 square meters, which will be serviced by two onboard aircraft lifts (it is not known whether this information is current or not).

The most interesting thing concerns the air group. The ship will be able to carry three dozen fighters, E-2D early warning and control aircraft, helicopters and UAVs. At the initial stage, the basis of the air group may be the Rafale M fighter: tests of the fighter and the EMALS electromagnetic catapult will be carried out in Lakehurst (New Jersey) until 2030. 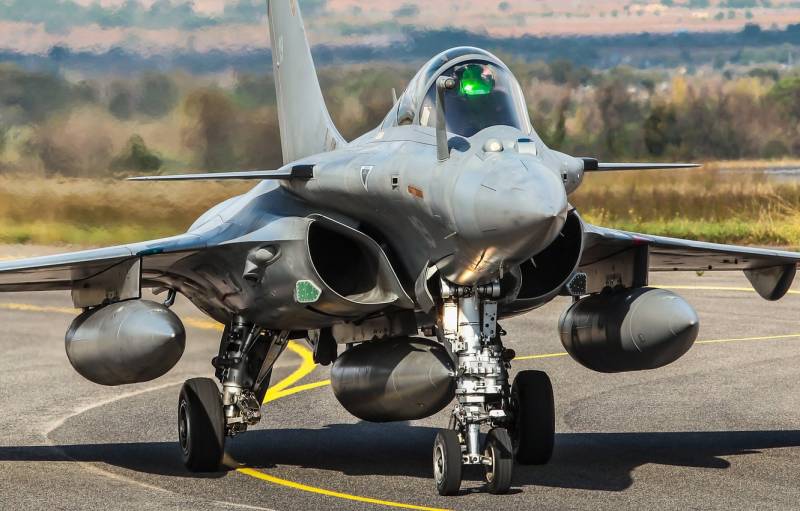 In the future, the ship should receive the latest sixth-generation fighter NGF (Next Generation Fighter), which is being created under the Future Combat Air System (FCAS, Système de combat aérien du future) program. Rather, its naval version: the fighter will exist in at least two versions. It is difficult to say yet what this car will look like. Most likely, the models and images are far from reality. If we sum up all the known data, then the aircraft will be large, unobtrusive, twin-engine and will be able to control the slave UAVs (provided, of course, that they appear).

The production fighter should see the light of day by about 2040. True, it is difficult to speak with confidence about anything. Recently, France and Germany, jointly developing the fighter, had a deep quarrel over the vision of the situation. This concerned, first of all, the rights to technology. Later, this spring, the parties nevertheless found a consensus: at least formally. But the sediment still remained. 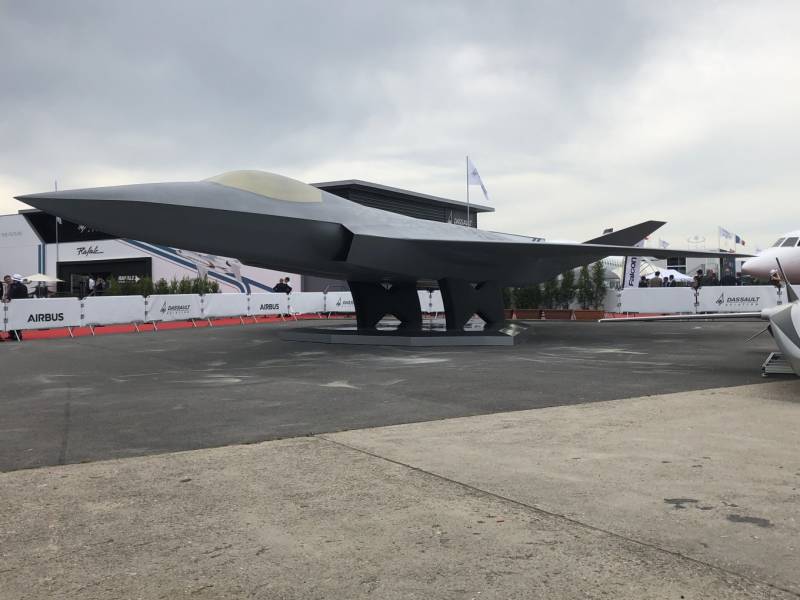 Photo: JohnNewton8, wikipedia.org
As for the aircraft carrier, it should be completed by 2036. The construction of the ship will be carried out at the shipyard in Saint-Nazaire in the west of France.

What do the British have?

For obvious reasons, it doesn't make much sense to compare the capabilities of the PANG and the new American aircraft carrier. And it's not just that the Gerald R. Ford is much larger and can carry up to 90 aircraft and helicopters. By the time the PANG goes into operation, the Americans may already have a good half dozen Fords at their disposal. And by that time they will have a lot of experience in operating them.

If we talk about the countries of the European Union, then Italy has two aircraft carriers and the Spaniards have one. However, in all cases we are talking about "mini-aircraft carriers", whose capabilities are incomparably less than those of Charles de Gaulle, not to mention the Porte Avion Nouvelle Generation.

The most logical comparison of Porte Avion Nouvelle Generation with the new British aircraft carrier Queen Elizabeth, especially since it has a similar displacement - 70 thousand tons. Each of the two Queen Elizabeth-class ships will be able to carry about fifty aircraft: up to 36 unobtrusive F-35B Lightning II short takeoff and vertical landing multipurpose fighters and a certain number of helicopters. Like the PANG, the ship will receive two lifts, but there is an important difference. Compared to the French aircraft carrier, Queen Elizabeth does not have launch catapults, relying on a springboard like the Admiral Kuznetsov. Simply put, it will not be able to use either heavy AWACS aircraft or conventional carrier-based fighters. This is a significant limitation. 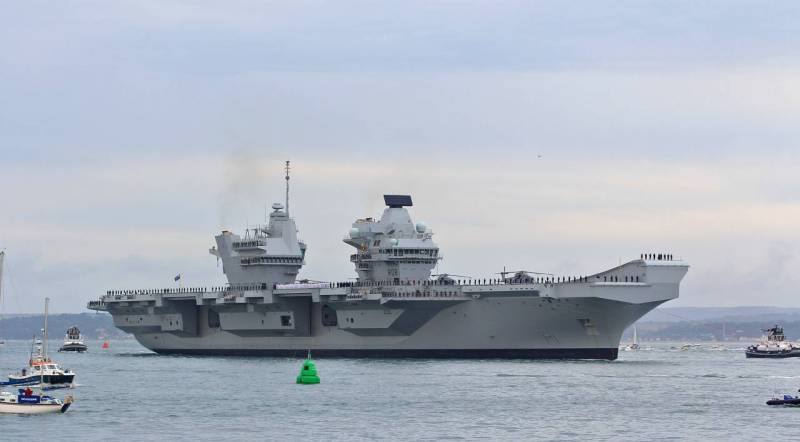 Photo: Brian Burnell, wikipedia.org
The British decided to save money. Is this economy bad?

It depends on which side to assess the situation. The presence of two aircraft carriers at once allows the British the fleet always be in a state of high combat readiness: one ship will be undergoing repairs and upgrades, while the other will be able to take over the execution of combat missions. In this sense, there is no clear winner, because France traditionally relies on one ship of this class. It is unlikely that PANG will be built in a series of several units: this is an overly expensive undertaking for the Fifth Republic.

There is another country in Europe that may have a new aircraft carrier. This is Russia. Obviously, so far there is no clear understanding of what will replace the aforementioned "Admiral Kuznetsov". At different times, different options were proposed. In 2013, within the framework of the international naval show in St. Petersburg, specialists were shown a model of an aircraft carrier of the project 23000 "Storm". The ship's displacement is up to 100 thousand tons. Aviation group - up to 90 aircraft, including the carrier-based version of the fifth generation Su-57 fighter. 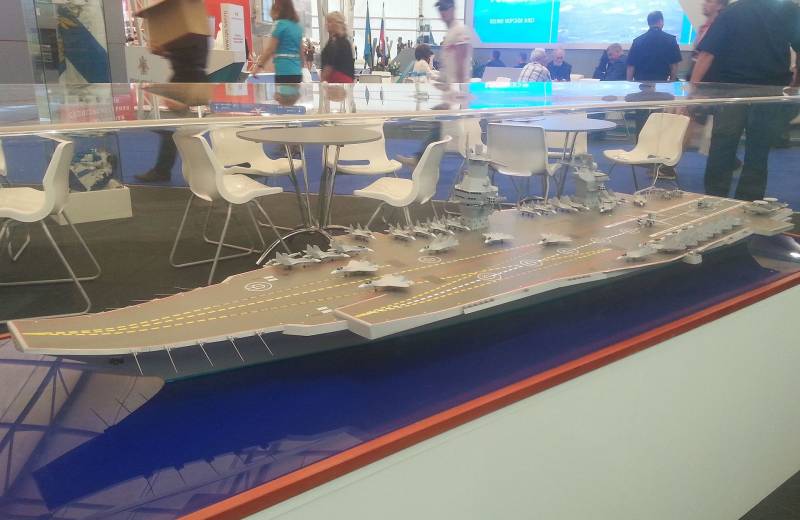 Photo: LeAZ-1977, wikipedia.org
We can say that it was the "pre-crisis" version of the aircraft carrier. In 2019, the Nevskoye Design Bureau presented the appearance of the Project 11430E ship "Manatee", which has more modest capabilities. Its aviation group should be up to 60 aircraft and helicopters. The fifth generation fighter models were no longer on the deck. 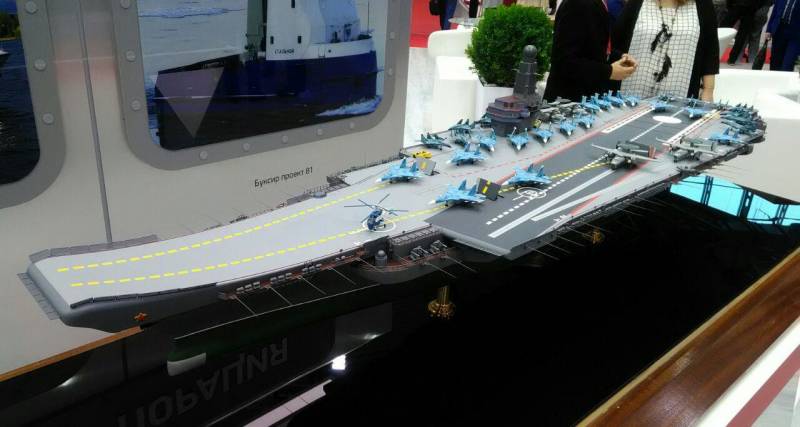 Source: wikipedia.org
And in January, the Nevsky Design Bureau showed the concept of the Varan aircraft carrier with a displacement of 45 thousand tons. It can accommodate 24 "multipurpose aircraft" (obviously, this means fighters of the MiG-29K / KUB type), six helicopters and up to 20 UAVs. 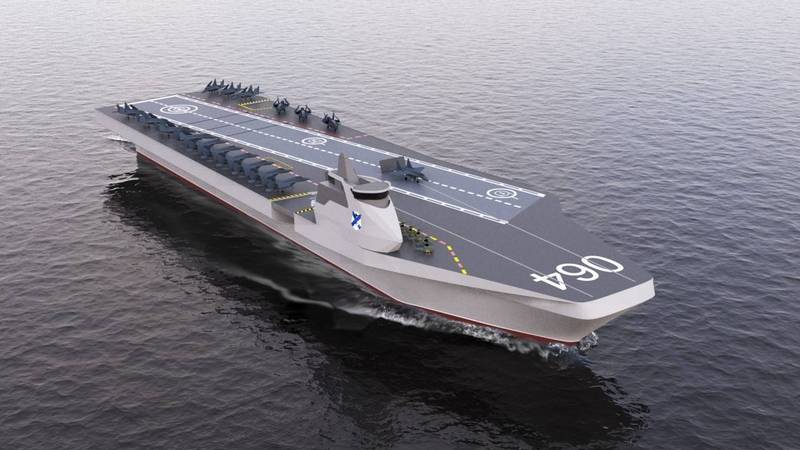 Image: Nevskoe PKB npkb.ru
Since this is the last of the concepts of Russian aircraft carriers presented to date, it can be assumed that they want to see such a ship now in the Navy. In this case, PANG (and the British Queen Elizabeth) will have an advantage over the promising Russian aircraft carrier. At least in terms of the number of combat aircraft.