For study and for combat. Concrete bombs 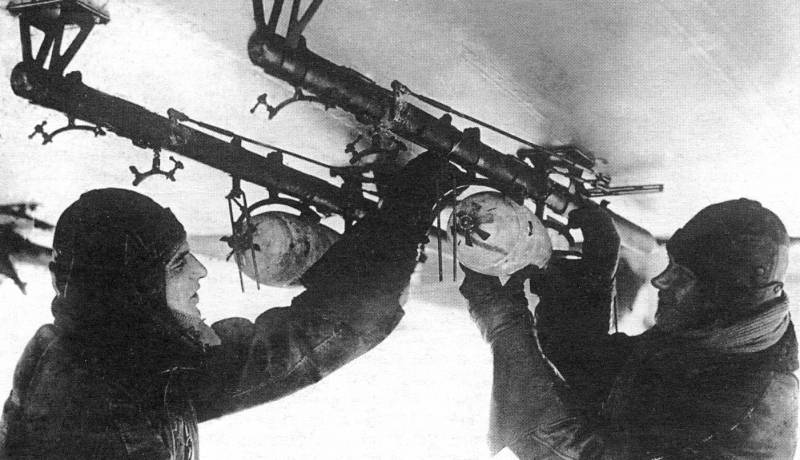 Suspension of bombs TsAB-P-25M2 on the holder DER-4. Photo Russianarms.ru

Traditional designs aviation bombs involve the use of a metal case with one or another filling - an explosive charge or submunitions. However, it is possible to use other materials such as concrete. IN stories aviation weapons were attended by a wide range of bombs made entirely of concrete or with its use as ballast. These were mainly products for training purposes, but combat models are also known.

The idea of ​​making bombs from non-standard materials dates back almost to the First World War. The rapid growth of military aviation required the organization of high-quality training of pilots, incl. teach them bombing. The use of bulk combat bombs was economically disadvantageous and unsafe, which required a different option.

Concrete could be a convenient solution. Training (practical) bombs made from this material were quite cheap and easy to manufacture, but at the same time they qualitatively imitated a full-fledged ammunition. The idea of ​​making and using practical concrete bombs in the twenties and thirties spread to all the major countries that built their bomber fleets.

Early concrete bombs were made in the caliber and form factor of standard combat items. Most often, a one-piece "body" was used, to which a metal plumage was added. Some training bombs were carried out on the basis of existing units. In this case, the finished combat corps weapons was filled not with standard explosives, but with concrete of the same mass.

Over time, more progressive designs appeared with a full-fledged fuse and charge, a low-power high-explosive or smoke one - for a clearer designation of the crash site. As the rulers of real bombs developed, the nomenclature of concrete practical bombs also expanded. This made it possible to carry out the most complete and high-quality training of pilots. 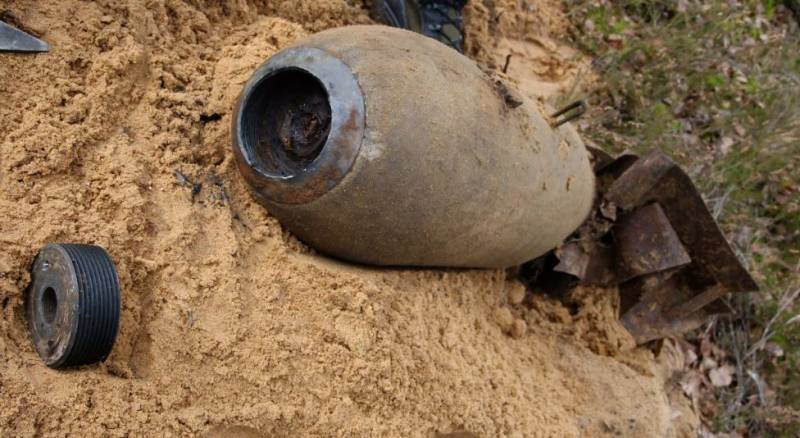 Found TsAB-P-40. The fuse bushing, concrete body and deformed stabilizer are visible. Photo Russianarms.ru
During the Second World War in Germany, against the background of a shortage of various materials, combat versions of concrete bombs were created. Wire-reinforced concrete was used in the manufacture of shells for bombs in calibers from 10 to 250 kg. In terms of fragmentation, such ammunition was inferior to full-fledged metal, but it was cheaper and more affordable. There were several designs in which a cement slurry was used to fix ready-made striking elements.

Other countries were able to use concrete munitions only for training purposes. They retained this role until the mid-forties. During this period, the Air Force began to master promising jet aircraft with improved characteristics and requirements for ammunition. The emergence of a new generation of high-explosive fragmentation and other bombs was accompanied by the development of appropriate educational products. At the same time, it was necessary to abandon concrete as a body material - now it was used only as a ballast-simulator of explosives.

Such training bombs continued to develop in parallel with combat ones. So, at present, many countries use practical ammunition with full-fledged control systems. In this case, the seeker provides delivery of a concrete or sand "charge" to the intended target.

Until the early thirties, the Red Army aviation continued to use pre-revolutionary practical bombs. They gradually became obsolete morally and did not correspond to the current state of military aviation weapons. In 1932-33. the first bomb of the new development P-40 (or TsAB-P-40), imitating a 40 kg caliber ammunition, was developed and put into service.

Bomb TsAB-P-7. Photo Russianarms.ru
The P-40 received a cylindrical body made of a cement mixture "OO" with a streamlined head and tail section. Inside the case there was a cavity for installing a fuse and an explosive charge. The bomb was supplied with a plywood stabilizer. The suspension was carried out using two metal lugs embedded in the concrete. They made it possible to transport the product horizontally or vertically.

In 1934, a new training bomb, TsPB-P-25, appeared, on the basis of which the P-25M2 product was later developed. They differed from the previous P-40 in smaller dimensions and a different design. Now used a drop-shaped body from the mass "OO", supplemented by a hemispherical head fairing. The fuse was placed in the central tail tube and fixed with a hairpin. The main charge for bombing during the day was made of TNT. At night, it was proposed to use bombs with a pyrotechnic composition that gives a bright flash.

Another interesting development was the KAB-P-7 bomb with a curb weight of less than 8 kg. This product received a ceramic case and, in general, repeated the logic of previous projects. However, ceramics quickly demonstrated insufficient performance characteristics. In this regard, the production of a cement bomb TsAB-P-7 for a similar purpose was mastered. 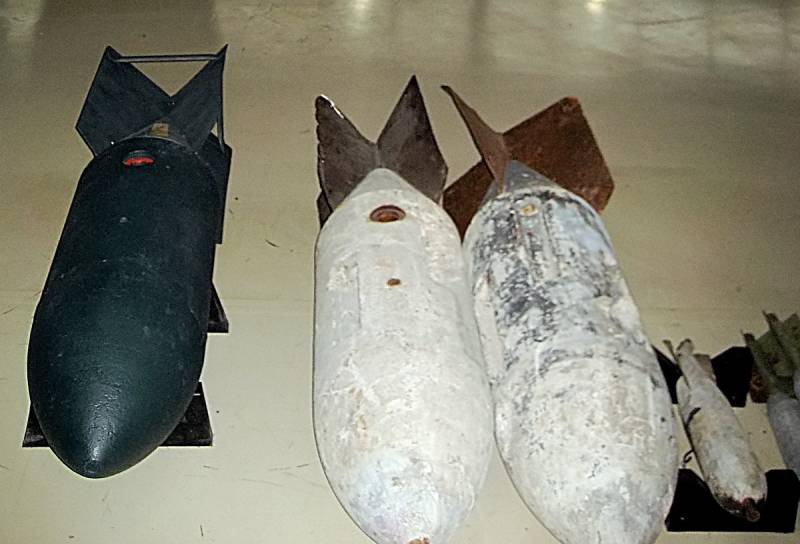 German aerial bombs of various types. On the left, in a dark color, is a fragmentation SD-250. In the center there are two concrete bombs with a caliber of 250 kg. On the right - 50 kg educational items. Photo Wikimedia Commons
Concrete practical bombs were produced in our country until the end of the Great Patriotic War. Problems with the supply of certain components sometimes led to changes of various kinds, but in general the designs did not change. The Air Force used such bombs during the war and in the early post-war years, after which they had to be abandoned.

In the second half of the forties, fundamentally new jet aircraft entered service, for which the next generation of ammunition was developed. Together with them, it was necessary to create new practical bombs in a metal case, suitable for supersonic and high-altitude flight. In general, the further development of domestic "concrete" bombs was similar to foreign processes.

For obvious reasons, in the first decades of their existence, concrete bombs were used only on training grounds and only against training targets. Later the situation changed. Concrete products have found application in real strikes, but they have not been able to noticeably squeeze the bombs of their usual appearance.

The first mass concrete combat bombs appeared in Germany at the final stage of World War II - a shortage of metal contributed to their appearance. Such weapons were quite actively used on different fronts and helped to reduce the cost of a bomb strike. However, such savings did not save the Nazis from defeat.

German concrete bomb SD-250. Photo Wwii.space
For the next few decades, concrete ammunition on board returned to the purely training category again. However, then new possibilities appeared, which determined the current scope of their application.

The advent of high-precision weapons made it possible to increase the likelihood of hitting a target and reduce collateral damage. The use of a highly effective seeker and an inert / practical warhead in theory makes it possible to completely exclude damage to foreign objects - as in the joke about the radius of destruction and the radius of the bomb. And such opportunities have been repeatedly used in practice.

After the Gulf War (1999), two large no-fly zones were established in Iraqi airspace under the supervision of NATO air forces. Over time, the Iraqi army deployed a fairly numerous and powerful air defense in these zones. Since December 1998, NATO aircraft have regularly encountered operating air defenses, incl. with attempted shelling. Iraqi air defense positions were often located in populated areas, and NATO retaliatory strikes regularly resulted in the death of local residents.

We managed to find a way out quickly enough, and they were guided aerial bombs with concrete "combat equipment". As practice has shown, a training bomb is quite capable of destroying an anti-aircraft gun, missile system or even a tank - subject to a direct hit provided by the GOS. In this case, the scattering of fragments and the propagation of a shock wave were excluded. The damage from the miss was minimal. 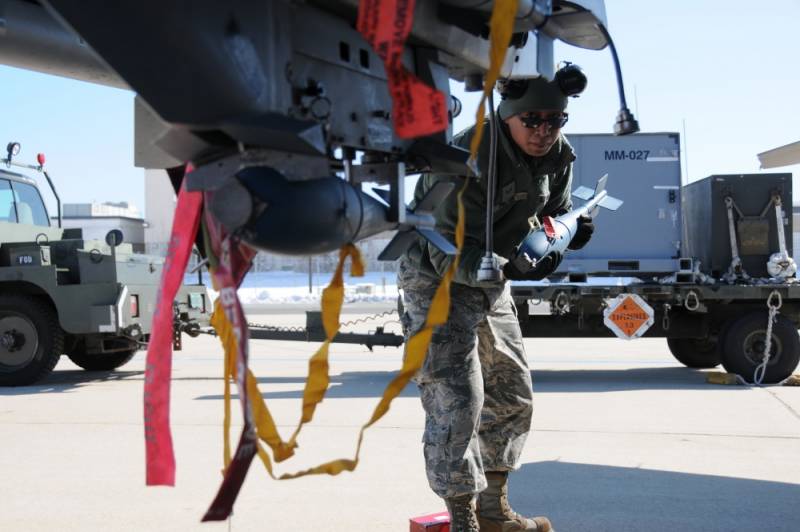 Preparing the US Air Force F-16C fighter for flight for the use of concrete training bombs. Photo by US Air Force
According to various sources, similar techniques were used more than once in the future by various NATO countries. First of all, new pinpoint strikes by the US Air Force are known. During the 2011 intervention in Libya, inert bombs were used by France.

At one time, concrete became a convenient and profitable substitute for metal in the manufacture of aerial bombs. Practical bombs with a concrete body were actively used for several decades, but then the development of aviation led to their abandonment. New training ammunition was built in a standard metal case - and concrete was placed inside as a weight simulator.

Further progress in the field of bomb armament did not lead to dramatic changes. Modern guided bombs in the training version are still filled with cement mortar or other substance with the required density and mass. In this configuration, they show sufficient effectiveness in influencing educational goals - and occasionally on real ones.

Most likely, the current state of affairs will continue. Concrete will leave a niche for a real explosive simulator, providing the required mass of the bomb assembly. A return to all-concrete bombs is not to be expected. The time for such products is long gone.