The steel grip of "soft power": Turkey in Georgia 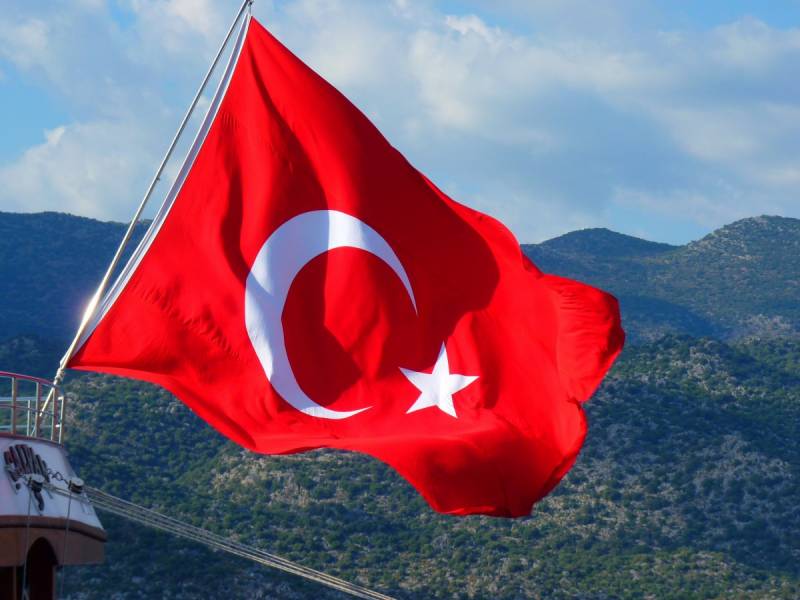 “Soft power” is usually presented as an alternative or addition to more rigid instruments of power, such as military and economic power. However, while we can say that soft power is independent of military capabilities, it is not easy to separate it from economic leverage. Comparing the asset of soft power capabilities to the economic assets of a country can show how the first element of influence relies on the second. Moreover, a closer look reveals how the dynamics of cultural attractiveness are also closely intertwined with economic benefits. In an increasingly interconnected world, in which the borders of individual states are increasingly lost, “soft power” can be a tool for achieving economic success. In turn, the effectiveness of achieving goals through economic instruments carries a greater consistency and efficiency compared to the purely influence of purely political methods - for example, such as the spread of democracy. "

According to the fabrications of British analysts who have been creating a new defense and government strategy for Great Britain for many years (A new era of British hegemony), in the modern world the boundaries between war, economics and politics have disappeared.

The reality is that cross-border trade, international television broadcasts, and a special forces clash in some distant Western Nigeria are closely intertwined and part of the same system.

At the moment, Turkey is one of the "trendsetters" in the sphere of the application of "soft power": Ankara skillfully influences the broad masses in various regions of the world, effectively achieving its geopolitical goals with an extremely modest resource base of the country.

However, television, military technology and humanitarian aid, mentioned in the first article of the cycle Are not the only tools in the arsenal of the Turkish Republic. It also has another, no less dangerous asset - the economic impact, thanks to which Ankara was able, de facto, to buy an entire country ... 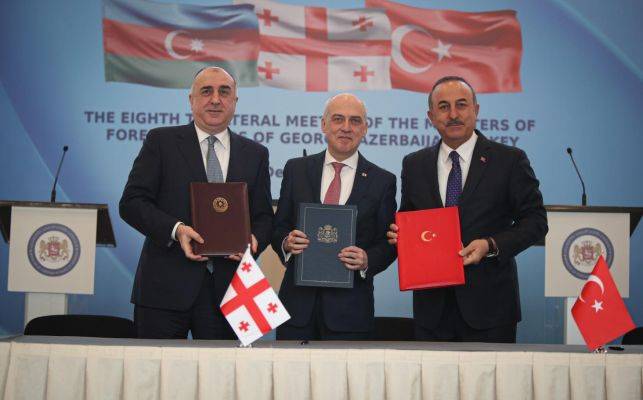 Alarming in its typicality, the picture in the post-Soviet space is friendship treaties and Turkish officials ...
Photo: hurriyetdailynews.com
Georgia, which we will talk about in this article, is one of the clearest examples of how covertly and cunningly the Turks can act even in the post-Soviet republics that are historically close to us. The descendants of the Ottoman sultans do not suffer from straightforwardness or clip thinking: they can equally well use drone squadrons and investments in infrastructure - and get their way.

“With the disappearance of the USSR, Turkey's role as the southern flank of NATO has significantly decreased. This was accompanied by both a reduction in economic and military assistance, and a painful for Ankara refusal of the EU to accelerate the admission of the Turkish Republic into its ranks. But for the first time since the collapse of the Ottoman Empire, the Turks had the opportunity to expand their influence beyond their own borders. With the emergence of the new independent Turkic-speaking states of Central Asia and Transcaucasia, Ankara has a new chance to revive its former greatness and increase its importance in world affairs. In the early 1990s, the traditional pan-Turkic ideas about the creation of the Great Turan were revived again ”.
- S. Druzhilovskiy, “Turkey: the habit of managing”.

The choice of this country as a separate object for considering Turkish methods of political influence is not accidental. Georgia stands out sharply against the background of most countries in which the influence of Ankara is spreading: firstly, as mentioned above, Georgia was actually bought out by the Turks, and secondly, it is a Christian country, historically alien to the Ottoman Empire.

The latter fact is quite remarkable, for it debunks one of the central myths that surround the advancement of Turkish influence in the world. He shows that Ankara can and does work with non-Muslim countries as well, making perfect use of “soft power”.

This process did not start today, not yesterday, or even a year ago: Georgia fell into the orbit of Turkish influence after the Justice and Development Party came to power in 2002, after which the former Turkish Foreign Minister Ahmet Davutogl began implementing the so-called Strategic Depth program (Stratejik Derinlik). The key slogan of this event was the thesis "zero problems with neighbors" - it, in turn, relied on such instruments as active political dialogue, economic interdependence and cultural harmony.

These processes laid down on fertile ground prepared by Turkish diplomats back in the 90s: Ankara was one of the first countries to recognize the independence of Georgia (immediately on December 26, 1991). In 1992, an agreement on "Friendship and Cooperation" was signed, and a few years later a visa-free regime was introduced with the possibility of crossing the border with internal passports (!).

Turkey was patiently waiting for its moment and in 2006, when Georgia actually broke off friendly relations with Russia, Ankara made its move. The move, however, is not as trivial as it might seem - not military, not political, but economic.

After 2006, the trade turnover between Tbilisi and Ankara begins to grow sharply. Gradually, year after year, Turkey became the first and central partner of Georgia in foreign trade - this circumstance has not changed even in the "coronavirus 2020".

In general, the facts of the economic activity of the Republic of Turkey are very frightening: the Turks account for 80% of foreign investments in Georgia. Most of the Georgian agricultural enterprises operate within the framework of transnational projects implemented by Ankara and are de facto Turkish. 75% of imported products imported to Georgia are of Turkish origin. 80% of all international investments (for example, British and American) in Georgia go directly through companies owned by Turkey. Most of the firms and enterprises of Georgia (70%) are tied to trade relations with their southern neighbor.

The central oil and gas pipeline Baku-Ceyhan and the Baku-Akhalkalaki-Kars railway are the most important infrastructure projects that Tbilisi is implementing jointly with Ankara. One of the key projects implemented in Georgia in recent years - Namakhvan HPP - is being built by the Turkish company ENKA (this HPP will provide 12% of the country's annual electricity consumption). The main supplier of electricity to the country is Ankara; in second place is its faithful ally - Azerbaijan.

In general, Turkish investment policy turned out to be terrible weapons - it creates more and more levers of control over the Georgian economy. At the moment, Turkey is among the top three foreign investors in Georgia: investments are directed to such sectors as the service sector, processing industry, telecommunications, and construction. For example, it is Ankara that modernizes and operates the country's largest airports (Tbilisi and Batumi). Turkish companies are building literally everything: state and military facilities, railways, highways ...

Even the recent protests related to the construction of a hydroelectric power station in Rioni (Turkey de facto concluded an anti-constitutional agreement with the Georgian government: an agreement was signed according to which the largest river in western Georgia, Rioni, along with its entire valley along 90 km.The Turkish management company can exploit 320 thousand square kilometers of the river basin area, all flora and fauna; also the Turks were given the border zone of Georgia with the Russian Federation, the Eden glacier in the Greater Caucasus mountains, where the Rioni River originates), show how the financial and political elite of Georgia are associated with representatives of the Turkish capital. Despite tens of thousands of protesters, the agreement was not canceled, but only approved by the new Tbilisi government.

Separately, it is worth mentioning the Turkish military presence: officers and security forces of Ankara have been training Georgian military personnel under the program of interaction with NATO for more than 10 years and cooperate with the country's law enforcement agencies. Since 2012, Turkey, Georgia and Azerbaijan have been conducting joint military exercises called "Infinity".

Turkish cultural and humanitarian organizations are active in Georgia, such as the Turkish International Cooperation and Development Agency (TİKA), the Yunus Emre Foundation and the Religious Affairs Department. 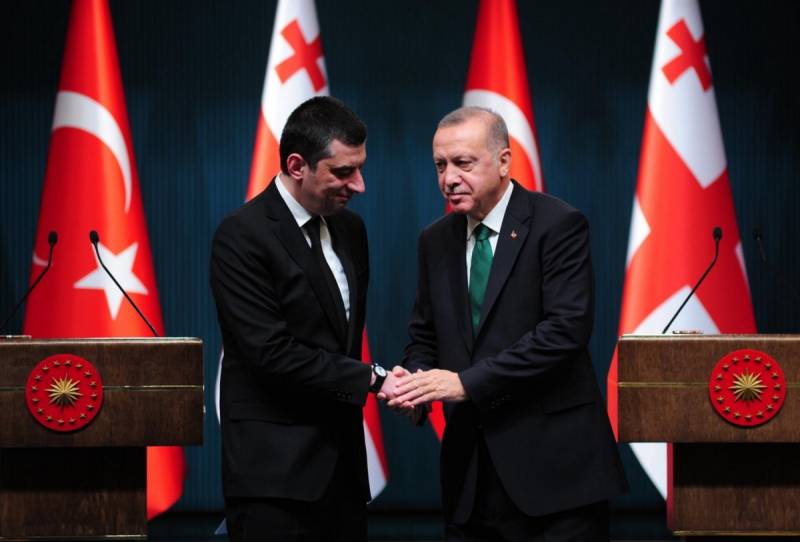 Photo: ANKARA-Anadolu Agency
The first of these organizations, since 1994, began to implement large-scale projects related to Turkish-Georgian economic cooperation in the fields of tourism, culture, education, health care, humanitarian aid, and school education. Separately, it is worth mentioning that the agency is implementing the "Turkology" project - special departments dedicated to the study of Turkey have been created within the framework of Georgian universities.

The Yunus Emre Foundation has its own center in Tbilisi and on an ongoing basis holds various cultural events, days of Turkish culture, implements scientific projects and conducts training courses in Turkic studies.

The Department of Religious Affairs implements the restoration and construction of mosques, selects students for theological courses in Turkey and spreads Islam among the Christian population of Georgia.

All of the above methods of economic and cultural influence are implemented only the Turkish government. In fact, the country operates no fewer private programs, projects and organizations promoting the interests of Ankara.

From all of the above, one can make, perhaps, a rather simple conclusion: Georgia, being de jure an independent state, is in fact completely and completely the property of the Turkish Republic.

And this is Ankara's "soft power" - power, which acts with the power of an atomic bomb, but is realized completely unnoticed by the rest of the world.

Ctrl Enter
Noticed oshЫbku Highlight text and press. Ctrl + Enter
We are
Situational analysis of the death of the MH17 flight (Malaysian Boeing 777), made on the basis of engineering analysis from 15.08.2014Results of the week. “In our cooperative, the board is always agreed”
Military Reviewin Yandex News
Military Reviewin Google News
99 comments
Ad