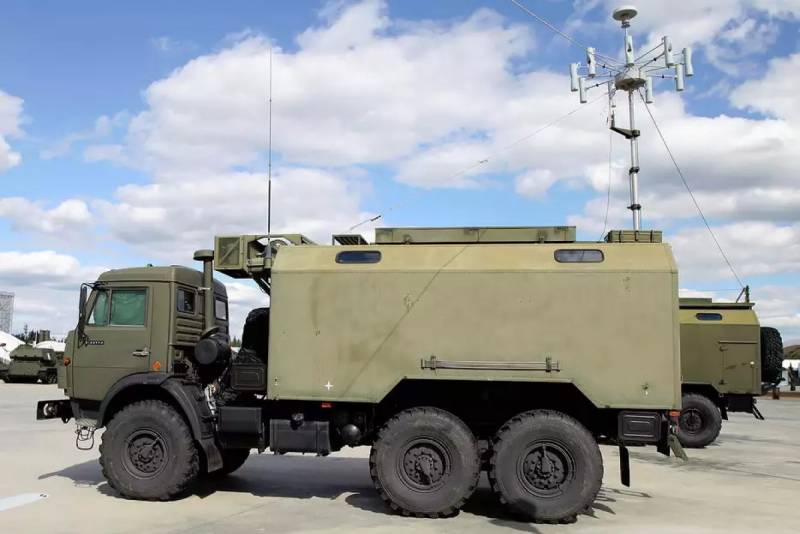 In the nomenclature of modern domestic electronic warfare systems, there is a rather interesting sample - the so-called. system of covering objects from the aiming use of high-precision weapons "Field-21". This product was first shown to the public in 2013, and in 2016 it was adopted by the Russian army. Since then, it has been repeatedly reported about the transfer of the complexes to the troops and their use during various exercises.

The Pole-21 complex was developed at the Scientific and Technical Center for Electronic Warfare (STC REB). The main design work was completed by the middle of the last decade, and in 2016 the complex was adopted by the Russian army. There is a modernized version of the Pole-21M, which is already present in the army, and an export version of the Pole-21E, which is being promoted on the international market.

"Pole-21" is designed to counter high-precision weapons and other enemy systems using satellite navigation. The task of this complex is to jam and suppress signals from navigation satellites. Not being able to accurately determine their coordinates, an enemy missile, bomb, aircraft, etc. cannot solve the assigned combat mission.

The complex is built on a modular basis that simplifies its production and deployment. The unified module "Fields-21" is a radio station R-340RP, which includes the instrument part and antenna modules. Each post of the complex includes one container with equipment and up to three antenna modules. The complex also includes a remote control panel that provides control over 100 posts. 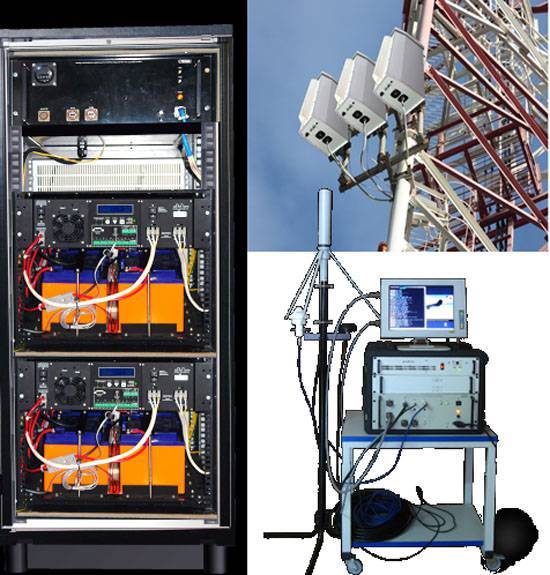 Means of the "Pole-21" complex: a rack with equipment (left), antenna modules (top right) and a control panel
R-340RP stations with antennas are proposed to be placed on existing or specially erected towers and masts of a suitable height. It is also possible to place funds of the complex on a car base. Compatibility with various power supplies is ensured. Communication between the components of the complex can be maintained via wire lines or radio. So, in the case of installing posts on cell towers, it is possible to use GSM antennas as a backup.

The standard method of deploying and using the Pole-21 complex provides for the installation of a large number of modules over a large area, taking into account the shape and size of the working sectors. With optimal placement, one complex with 100 antenna posts allows covering an area of ​​150 x 150 km. A reliable "dome" of interference is created over such an area, excluding the use of satellite navigation.

In August 2016, the Russian media, citing their sources, reported on the adoption of the Pole-21 system into service. At the same time, the Ministry of Defense and the organization-developer did not confirm or deny such information. Also, for some time news on the introduction of "Field-21" in the troops did not arrive.

The first message of this kind appeared only a few years later. In November 2019, the Ministry of Defense announced that Field-21 had entered service with an electronic warfare unit from the Central Military District. It was also reported that the rearmament of the Central Military District will not stop there, and in the near future the troops will master new electronic warfare systems.

Shortly thereafter, in early December 2019, it became known about the deployment of the Pole-21 system at the 201st base of the Russian armed forces in Tajikistan. According to this news, the personnel worked out the deployment of equipment in an unprepared area and tested it in action. In the near future, the complex was planned to be put on alert.

In mid-April 2020, a new type of electronic warfare system was transferred to the corresponding unit of one of the combined arms armies of the Eastern Military District. It is curious that this time it was about the "Pole-21M" complex. 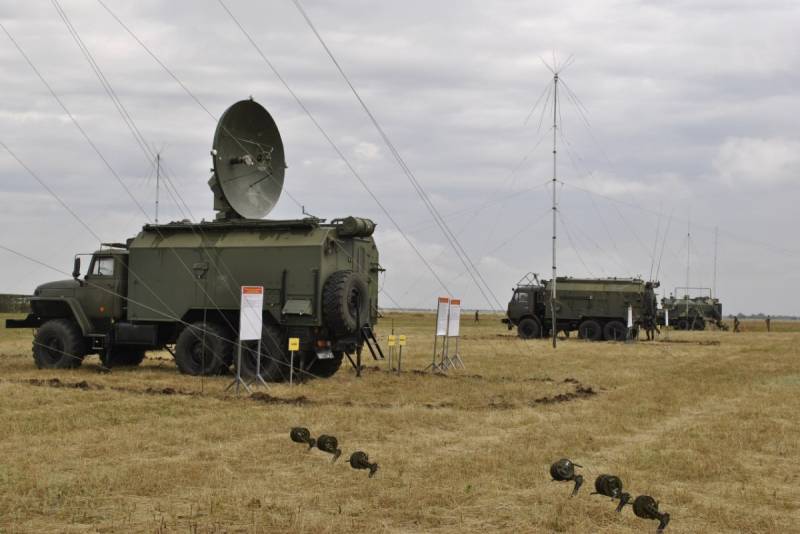 In January 2021, the Ministry of Defense announced that by the end of the year, the Central Military District units will receive 10 more Pole-21 complexes. These products will be handed over to units deployed in the Urals and Siberia. The transfer of the announced systems has not yet been reported

Just the other day, they officially announced the presence of "Field-21" at the Tartus base in Syria. This system, together with other modern developments, is used to combat possible raids and to suppress other undesirable activities of a potential adversary.

Soon after the first news about the deployment of "Field-21" in the troops, there were reports of the use of such complexes in various exercises. The specialists of the 201st base of the Russian army were the first to use their equipment. In early January 2020, they organized a cover for the residential and administrative zone, weapons depots and positions of anti-aircraft complexes.

Subsequently, reports on the use of the Pole-21 complex in various exercises were received with enviable regularity. These products are used independently and in conjunction with other electronic warfare systems for various purposes. The last time the Ministry of Defense reported about such events was a few days ago, in mid-April. In a number of cases, some details of the exercises were revealed, which made it possible to present the capabilities and range of tasks of new complexes.

Reportedly, during the exercise, "Pole-21" mainly confronts the unmanned aerial vehicles of the imaginary enemy. With the help of interference, the complex disrupts the navigation of the UAV and disrupts its performance of the assigned task. Apparently, this version of the use of the complex was worked out by all divisions-operators. 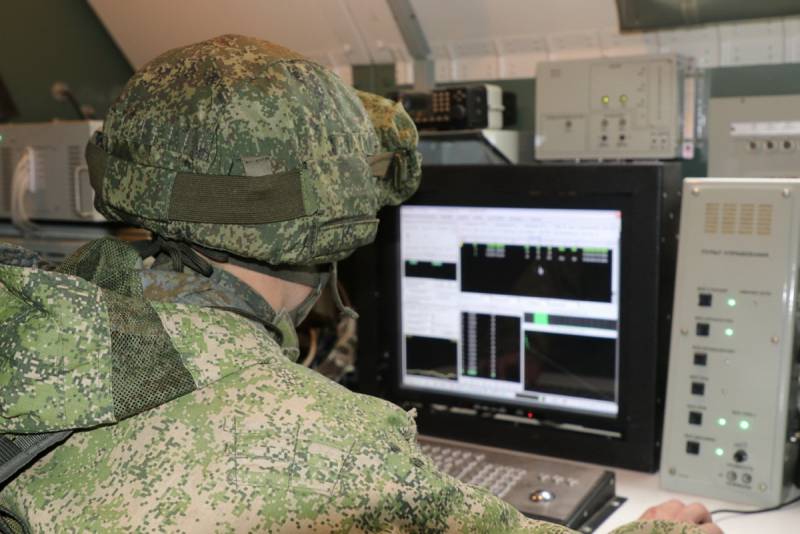 Also, the joint use of "Field-21" with other systems was tested. For example, in October last year, the troops of the Central Military District, together with this complex, used the "Zhitel" jamming station, with the help of which they suppressed the UAV's communication channels. In Tartus, together with Pole-21, the Ratnik-Kupol complex was deployed, which makes it possible to suppress navigation signals and control channels.

Recent exercises in the Southern Military District showed the capabilities of the Pole-21 system to work in the reconnaissance and strike contours of the combined arms army. Electronic warfare units worked as part of battalion tactical groups and provided their protection from reconnaissance drones. With the help of interference, it was possible to disrupt the work of the UAV and hide its troops from the artillery of the imaginary enemy.

Deliveries of serial electronic warfare systems "Pole-21 (M)" to the troops began only a year and a half ago, and since that time they have been received by subdivisions of three military districts. According to known data, the production and supply of such equipment will continue in the future - the Central District alone will receive 10 new complexes this year.

In the past, the Pole-21 complex has confirmed its wide capabilities during tests, and now it shows a high potential within the framework of exercises of various scales. Its ability to disrupt the enemy's navigation, disrupting the performance of its tasks and ensuring the protection of its facilities has been repeatedly demonstrated.

It is easy to see that the Pole-21 complex, with all its proven advantages, is not universal - it is a specialized system for suppressing radio signals of a certain purpose. However, it copes with its task perfectly, and also has high technical and operational characteristics. In addition, the principle of suppressing satellite navigation takes into account current trends in the development of armies and their weapons.

A specialized complex designed to counter enemy navigation systems has already found its place in the structure of the electronic warfare of the Russian army. The number of such equipment is gradually increasing; the list of operating parts is expanding. Thus, our armed forces are actively developing and expanding their capabilities to counter the enemy - and the development of "Field-21" becomes another important step in this direction.

Ctrl Enter
Noticed oshЫbku Highlight text and press. Ctrl + Enter
We are
And in the open field "Field-21M" is ragingDome over the Ministry of Defense
Military Reviewin Yandex News
Military Reviewin Google News
29 comments
Information
Dear reader, to leave comments on the publication, you must sign in.