BM-13 "Katyusha" after the Victory: still in service 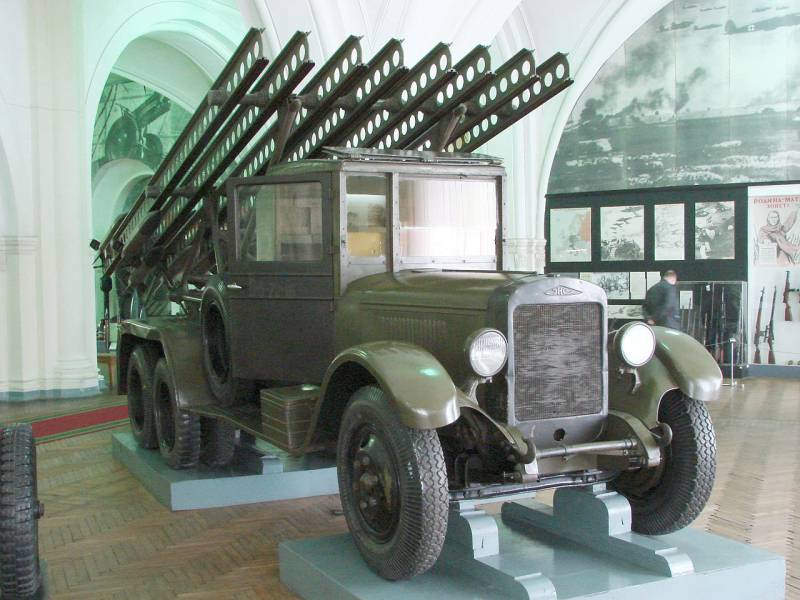 BM-13 on the ZIS-6 chassis at the VIMAIViVS exposition. Photo Wikimedia Commons

Guards rocket launchers BM-13 or in a simple way "Katyusha" showed themselves well during the Great Patriotic War and deservedly bear the honorary title Weapons Victory. After the end of the war, such equipment continued to serve and remained in service for many decades. In some countries, "Katyushas" remain in service to this day.

The serial production of M-13-16 rocket launchers for the 132-mm M-13 projectile was launched in June 1941, just a couple of days before the German attack. By the end of the year, several enterprises managed to produce almost 600 such installations for mounting on automobile chassis. Already in 1942, production was increased several times and satisfied the current needs of the army.

The production of M-13-16 installations and rocket systems based on them continued until 1945 and was curtailed due to the end of the war. For all the time, approx. 6,8 thousand installations. The overwhelming majority of them were used in the construction of BM-13-16 self-propelled rocket launchers on a car chassis. Tractors, armored platforms for armored trains, boats, etc. were also carriers for missile guides. 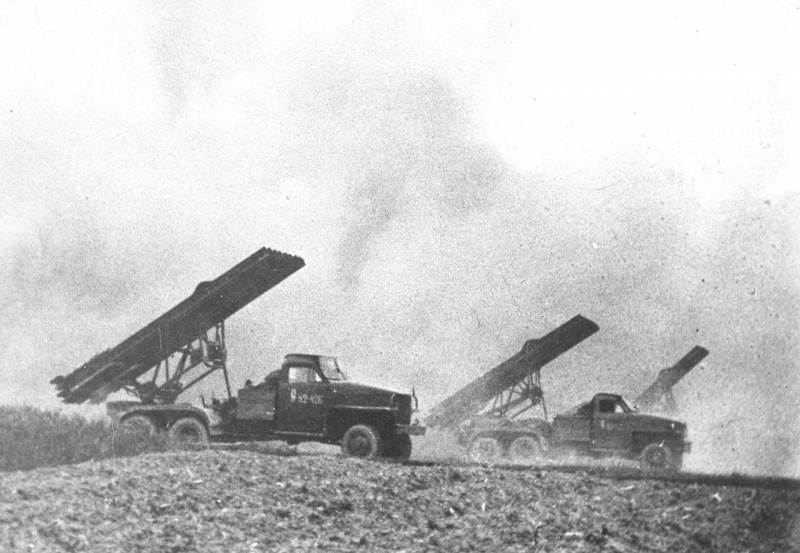 BM-13N on US6 chassis are preparing to fire, 1944. Photo by Wikimedia Commons
The first serial BM-13-16 were carried out on the domestic ZIS-6 chassis. In the future, other basic machines of domestic and foreign production were also used. So, at the beginning of 1942, the installation of rocket launchers on trucks, received under Lend-Lease, began. In this process, more than 15-17 types of equipment were used at different times, but the Studebaker US13 car quickly became the main carrier of the M-16-6.

At the end of the war, the basis of the fleet of rocket launchers was made up of vehicles based on the "Studebaker", which was facilitated by their mass production. BM-13-16 in other configurations, incl. on domestic chassis were available in smaller quantities. Reactive installations were retained on other media as well. In addition, the troops had launchers for shells of several other types.

Thus, after the war, the Red Army had a fairly large fleet of guards mortars, but it had a number of problems. The main thing was chassis ununification. In addition, most of the equipment was built on foreign trucks, which further complicated the operation and supply of spare parts. Within a reasonable time frame, the American US6 chassis should have been replaced by a domestic vehicle with the same characteristics. 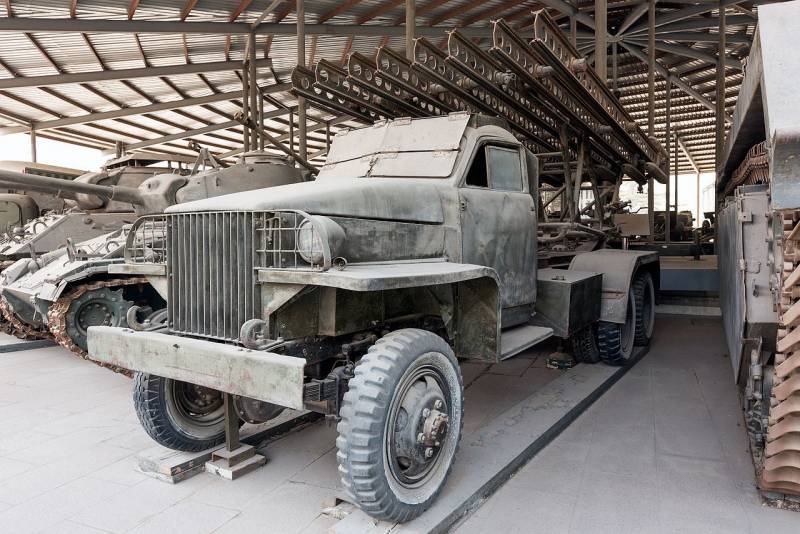 A Katyusha on a Studebaker chassis in a Chinese museum. Photo Wikimedia Commons
Rocket mortars BM-13 and other models at that time were considered as modern effective weapons capable of inflicting significant damage to the enemy. At the same time, it was considered necessary to develop new systems of this class with increased characteristics. "Katyushas" and other samples had to remain in service until such a replacement appeared - and this was the second reason for modernization.

The first attempt at such a modernization was made already in 1947. The BM-13N type combat vehicle mod. 1943 was rebuilt using the latest ZIS-150 truck. According to known data, no more than 12-15 of these machines were built, after which the work stopped. This technique was repeatedly demonstrated at parades, but, for obvious reasons, could not affect the operational characteristics of rocket artillery in general.

Taking into account the accumulated experience in 1949, they developed and adopted the BM-13NN or 52-U-941B combat vehicle. This time, the ZIS-151 three-axle all-wheel drive chassis was used. Together with the launcher and other target units, the car received folding flaps for the cab and protection of the gas tank. As a result of such modernization, it was possible to achieve a noticeable increase in the main characteristics, including operational ones.

According to reports, the production of new BM-13NN was carried out using units of old combat vehicles. The launcher and other parts were removed from the BM-13 on an outdated base, repaired and fixed on a modern chassis. At the same time, other models of rocket mortars that remained in service after the war were undergoing a similar restructuring. 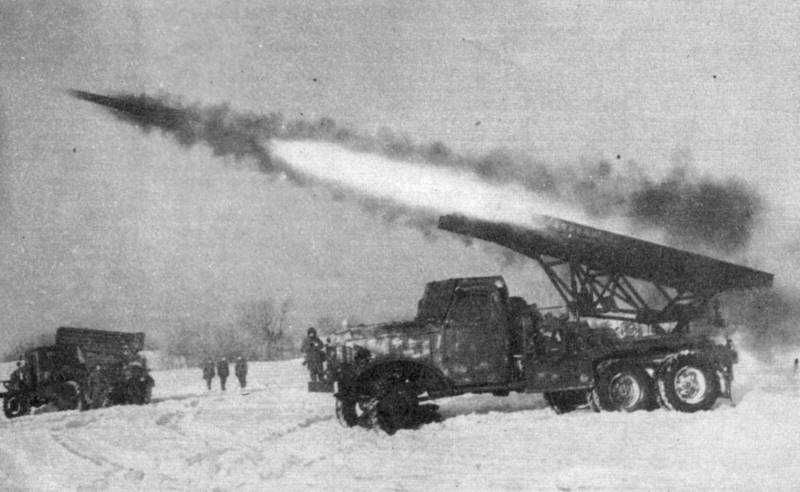 BM-13NM on the ZIS-151 chassis is firing. Photo Wikimedia Commons
The next version of the modernization appeared in 1958 and received the designation BM-13NM (GRAU index - 2B7). This project involved a minor alteration of the launcher and related units. All of them were installed on the ZIL-157 car. Once again, the newest cargo chassis was used to update the Katyusha, and again, a simple rearrangement of the units was done.

In 1966, the latest version of the system, BM-13NMM (2B7R), entered service. In this case, the ZIL-131 car was used as the basis. For the first time, the set of target equipment has undergone a slight change. A folding step for the gunner appeared on the rear left of the chassis. The performance characteristics practically did not change, but the efficiency increased again and the operation was simplified.

All new modifications of the BM-13, receiving a launcher from the times of the Great Patriotic War, retained compatibility with the entire range of M-13 projectiles. In addition, in the post-war period, several upgrades of such weapons were performed, aimed at optimizing production and some increase in performance.

In the Soviet army

In the first post-war years, BM-13 and other machines of existing types were considered as the basis for rocket artillery - but only until newer models appeared. However, the new multiple launch rocket systems could not quickly displace the existing Katyushas, ​​and their complete replacement for several decades. In particular, it was this that led to the fact that new modifications of the BM-13 were developed until the mid-sixties. 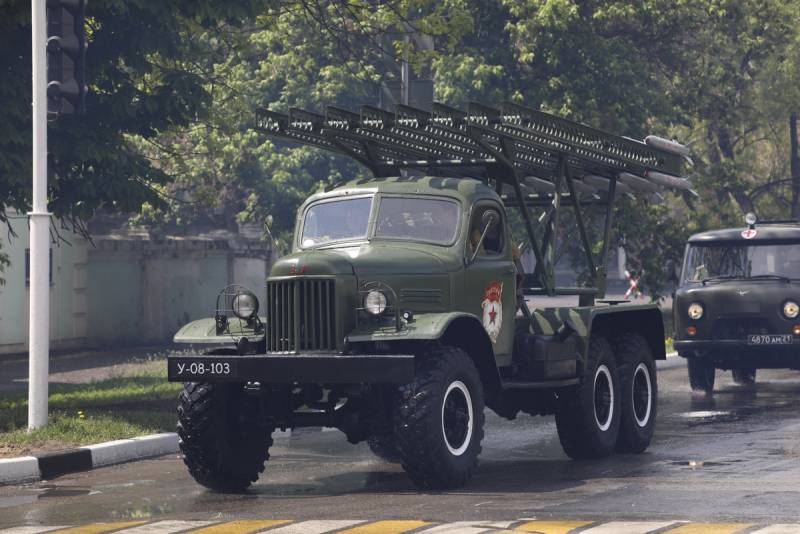 Restored combat vehicle on the ZIL-157 chassis, May 2020 Photo by the Ministry of Defense of the Russian Federation
A cardinal turning point in the Soviet army came in the mid-sixties with the advent of the BM-21 Grad MLRS. As such equipment was supplied, the BM-13 and other old models were decommissioned. However, they did not completely abandon them. Katyushas were used by training regiments as sighting installations until the early nineties.

In the future, these machines were withdrawn to the reserve or written off. According to The Military Balance manuals of recent years, there are still 100 BM-13s of unknown modifications in reserve. To what extent this information corresponds to reality is unknown.

Already in the first post-war years, the USSR began to transfer various military equipment to friendly foreign countries. So, the first BM-13 went abroad by the beginning of the fifties, and in the future, such deliveries continued regularly. This technique was mastered by the armies of Asia, Africa, Europe and South America. Katyushas of all serial modifications were shipped to foreign armies, up to the latest BM-13NMM.

Among the first on this list were the Chinese military; they were the first to use the received equipment in battle. BM-13s were repeatedly used during the Korean War and often had a decisive influence on the course of battles. During the operations, up to 20-22 combat vehicles were used simultaneously, as well as dozens of artillery pieces. 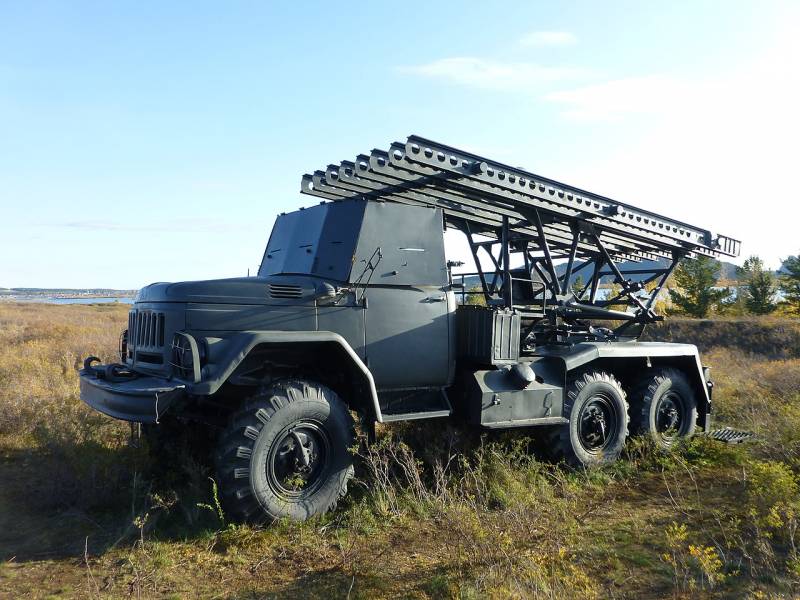 Fighting vehicle BM-13NMM on the ZIL-131 chassis. Photo Wikimedia Commons
A few years after that, BM-13 was used by the forces of the Democratic Republic of Vietnam. In particular, in the decisive battle of Dien Bien Phu, the Vietnamese troops used 16 rocket launchers - one fifth of the entire artillery group. As far as is known, the later versions of the "Katyusha" until recently remained in service with the Vietnamese army. So, in 2017, photographs from the base were widely dispersed, at which several late BM-13NMM were present at once.

In the early sixties, BM-13N / NM were supplied to the army of the Kingdom of Afghanistan. A certain amount of such equipment remained in service at the time of the start of a full-scale war in 1979. The Afghan army used them in battles with the enemy. In the future, the outdated machines were replaced with newer Grads.

According to known data, until the recent past, BM-13 of later modifications remained in service with Peru. The last mentions of the Peruvian army date back to the turn of the two thousandth and tenth years.

According to The Military Balance reference books in recent years, at the moment BM-13 remain in service only in Cambodia. Its army also remains the only operator of the obsolete BM-14. The number of such equipment, its condition and status are unknown. At the same time, Cambodian Katyushas serve together with Grads and old samples from third countries. 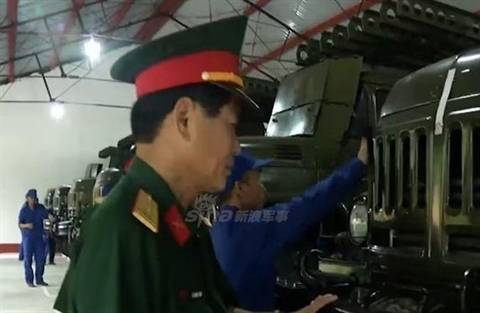 If Cambodia really continues to operate its rocket launchers, then the BM-13 in the coming months can celebrate the 80th anniversary of its service - in different countries and on different continents. Not every artillery system can boast of such a long service life.

The first prerequisite for such a long-term operation of the "Katyusha" should be considered a successful design of the complex as a whole, which gave rather high characteristics. In addition, an important factor was the mass production of such equipment in 1941-45, which forced it to remain in service even with newer models. In this regard, several upgrades were carried out, extending the overall service life.

Then the USSR was able to re-equip its army, and the released combat vehicles went abroad. Finally, the last factor was the poverty of the new owners. For example, Cambodia still retains BM-13 not for tactical and technical reasons, but because of the impossibility of replacing them with modern technology.

Thus, having become the Weapon of Victory, the Soviet guards BM-13 rocket launchers continued their service - and again helped to smash the enemy and liberate the peoples. And after a few decades, the few combat vehicles that remain in service allow us to count on a record for the duration of service. History Katyusha is nearing completion - but not finished yet.