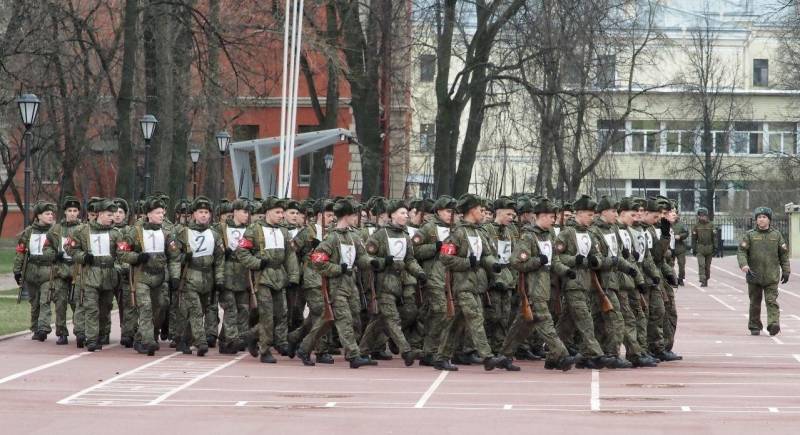 The "abscess" of bullying

On April 12, a fight broke out in St. Petersburg between three Caucasians and cadets of the military medical academy. Everything turned out to be a real tragedy, which revealed a psychological abscess, which for many years "bloomed" in lush bloom in Russian military universities.

And just something - one of the cadets touched a Caucasian with his bag. Insulted in the best feelings, the mountaineer and two of his friends rushed to the "offender". The entire column turned around to help their comrades, but the commander stopped them. The major began to pull apart the fighters himself.

But he turned out to be no hand-to-hand fighter and peacemaker. As a result, the Caucasians seriously injured the cadets (two are still in the hospital) and fled. And all the time of the carnage, the cadets, following the order of the would-be major, stood and watched what was happening.

The incident shocked the entire military. The problems, which largely left the army, remained, as it turned out, in the cadet community. And the civilians raised a lot of perplexed questions. Colonel of the reserve medical service, military doctor Alexander Naryzhny tells us about why this became possible.

Alexander Georgievich at one time graduated from the military medical academy, the cadets of which were at the center of events. Later, on duty, he supervised all military schools in the country for many years. And he was immersed in the atmosphere that reigns in these universities, rather densely.

- Alexander Georgievich, how do you explain this emergency?

- Everything is logical to the utmost. Little of. Sooner or later, this was bound to happen. For many years I have been ringing all the bells about this problem at all levels. I was brushed aside. Now the time has come to dismiss the legitimate question of the respected public: what kind of army is this when a trio of thugs, descending from the mountains, are sweeping a platoon of future officers of the Russian army into the lungs? And the company commander, Major, runs like a zapoloshny lapwing, clucks, flaps his wings and cannot do anything?

- You probably remember how at one time the Soviet, and then the Russian army suffered from bullying?

- Perfectly. From time to time it came to mass shootings and murders - as in the case of Shamsutdinov.

- And there were many such cases. The problem disappeared by itself only when the troops switched to a contract basis. But - which is typical - neither the Soviet nor the Russian army was able to solve the problem of army hazing.

- This is a topic for a separate dissertation. But this is not what we are talking about now. Disappearing in the troops after the contract (and even then not everywhere, as shown история with Shamsutdinov), the army hazing in full and in the most perverted form was preserved in military universities and among the army officers. And its victims in military universities, first of all, are junior cadets.

The attitude of the officers-teachers towards them is the same bestial, as before in the army the grandfathers had towards the salags. Maybe there is no such bullying as it used to be in the army, but the desire to "put down the soplezhuyev" (as the officers-curators of the first-year students in our academy were called) were always burning with pain. In general, in all Russian military universities there is still an unspoken rule that a good officer can only come from a completely "lowered" cadet.

- Not strange, but scary. Personally, I have never known or seen a more cruel and dangerous mass delusion in my life. And I still don’t find a logical explanation for it. Little of. None of the highbrow military men with generals and marshals' shoulder straps either in the troops or in Glavpur (Main Political Directorate of the Army and fleet) and could not give me a logical and intelligible substantiation of this concept. Therefore, I was forced to look for an explanation myself ...

- The first version. Such "bullying" artificially creates a stressful situation for future military officers, which can often really develop in a real battle. But, on the other hand, it is quite possible to do this without humiliating human dignity - exhausting crosses, combat and sports training, all kinds of trainings.

Have you seen how "vevshniki" pass the exam for the maroon beret? It would seem, what other shocks are needed? But this should be done for a long time, painstakingly and substantively. Plunging a person into stress is a whole science that requires certain (and sometimes considerable) resources from the command staff - at least physical and temporary. And this is too lazy to spray. It is much easier to yell at "soplezhuya" and lower it all day long, plunging it into a supposedly stressful situation. Like, the cadet will survive the hardening of humiliation and will be stronger than steel.

Only the “fathers-commanders” (or “jackals-commandos”, as we called them in the academy) are trying to achieve the opposite effect. Instead of steel, slag can turn out. Often, the cadets of many military universities from the efforts of such "commandos" finish their "alma mater" in a state of severe post-traumatic shock. And for some time they come to their senses already in the troops.

Over time, of course, some of the cadets will return to normal. And someone will forever be stuck in a state of "slag" - like those medical cadets in the square. These were the "slags" deeply lowered by the "fathers-commanders" and stood in St. Petersburg as if paralyzed, while the thugs who had descended from the mountains crippled their comrades.

The second version is self-affirmation at the expense of others. Imagine you are a major, a platoon leader of medical cadets. Your superiors are "flattening" you in the service. At home - the wife. On whom to break away, to take the soul away? Of course - on the dumb cadets. So they come off ... And all with the same result.

- Immodest question. And how did you yourself survive this stage of "steel and slag"?

- It was not easy. I started my way back in the army, as a nurse. And they took healthy, tall and athletic guys there. The implication was that the nurse must carry the wounded from the battlefield. And if the wounded person weighs more than one hundred kilograms? And if you have to carry two at the same time?

In addition, many nurses after our "training" went to serve in Afghanistan. And there, everyone's life can depend on the skill of the "pill" (as the fighters called us). So the soldiers were afraid to run into "pills" - even "grandfathers" and daring scouts. But at the academy, officer hazing began. I was terribly surprised by the animal hatred that the "fathers-commanders" felt towards us, freshmen.

One of them was simply poisonous lymph. Once he pissed me off so much that I asked: “Why so much anger, Comrade Major? Did I take your mother to be shot? ” I should have seen his face after that. He then harassed me all the years of study. And the distribution was misplaced by a special pull - to the Trans-Baikal Military District. The famous ZabVO, which the troops decipher "Forget to go back."

- How do you assess the behavior of the major?

- There are also three versions. First. It's just a stupid soldier. "Boot," as we called them at the academy. This is the type of people in uniform who are absolutely incapable of thinking on their own. Their brains are replaced by the charter. But dull adherence to the charter in an emergency situation can easily lead to tragedy. And even to death. It was on the charter that this “boot” was “blown up” that day. And he brought a bunch of people under the monastery.

Second version. Major - just a cowardly "body in uniform." In the army, these are called "skins" and "jackals". And this "skin" was guided at that dramatic moment by one consideration - no matter how something happened. How would this conflict not be reflected in his career. Do you think that two or three cadets will be stuffed in the face by the Caucasians? The main thing is that no one at the academy learns anything (although it is not clear how this was possible).

"Shkura" did not think about the officer's honor, which the Caucasian gopniks were driving into the asphalt before his eyes. She did not think about the psychological well-being of the cadets. She saved her well-being and her career. It was this "body" that was smeared like a jackal. The unfortunate major fed a legend to his superiors that in this case, in the eyes of passers-by, it would look like "a crowd of military personnel is beating up a handful of unfortunate young people."

Of course, this was an outright lie. But it worked! That gave rise to a lot of questions already to the leadership of our ill-fated academy. What, the same "skins" are sitting there ?! Or maybe he's just a staff rat. He spent all his life in the headquarters, and does not know life - neither civil nor army. And any emergency situation plunges him into a stupor.

In any case, this "rat", or "skin", or "boot" must be driven both from the academy and from the army. Or send to my beloved ZabVO - already the captain. To be honest, I thought that the university would have an officer's honor court. What is it ... The bosses of the academy stood up to the defense of the one whose efforts they themselves found themselves in thick shit to the very eyebrows. Until now, no one is going to defend the honor of the stained officer's uniform.

- With the major and the academy, everything is clear. And what to do with the rabid hazing in military universities?

- As Comrade Stalin said, any problem has a name, surname and patronymic. This data is also available from the army university bullying. This name is Glavpur. I talked with these comrades and it was on this occasion that I talked many times. There is zero sense. But now the roast cock has pecked right in the brain.

And so that the hemispheres have changed places. Let them think. Maybe a miracle will happen? And will they even remember all my proposals that I presented to them in due time? Although it will not be easy for them. The military are the most conservative people on earth. Changing their minds is no easier than changing the planet's climate. So, perhaps, over time, all this will simply be released on the brakes. Army bureaucrats can do it.

And then we all have to wait for the next incident with "soplezhuyami", "skins", "rats" and "boots".

Ctrl Enter
Noticed oshЫbku Highlight text and press. Ctrl + Enter
We are
About Stalin and KhrushchevWhat you didn't want to know about England
Military Reviewin Yandex News
Military Reviewin Google News
210 comments
Information
Dear reader, to leave comments on the publication, you must sign in.