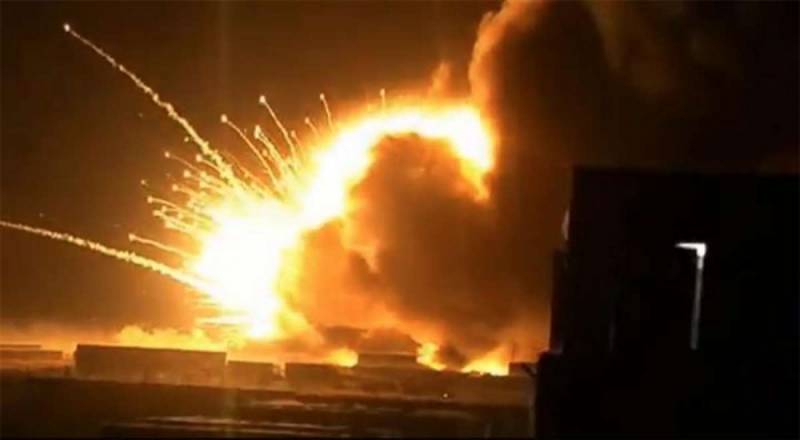 The mood today is clearly spoiled. Tainted by those the newsthat from yesterday you can read or hear on many information resources. Is it true that slavery is not a social phenomenon, but a genetic predisposition? Do slaves like being slaves to the point that they are willing to give their lives for their master? A terrible discovery, to be honest.


You probably already understood what I mean. Of course, about Petrov and Basharov, who, as it turned out, “put on their ears” all of Europe, and not just Britain. And about the Czech police, which in the shortest possible time, in less than seven years, finally solved the case of an ammunition bombing in Vrbetica in 2014. Why do many people believe in this nonsense from the owner?

Although no, I probably praised the police early. I will reveal a little open secret, in 2014 there were two explosions of warehouses in the Czech Republic with a difference of one and a half months. October 16 and then December 3, 2014.

I understand the Czech police very well. The October 16 explosion can be attributed to these top-level saboteurs. The fact is that Petrov and Bashirov, they are also Alexander Mishkin and Anatoly Chepiga (according to the British version), they are also the citizen of Moldova Nikolai Popa and the citizen of Tajikistan Ruslan Tabarov (according to the Czech version) were in the Czech Republic from 11 to 16 October.

And it would be okay to "tour" in Prague. No, they, like in Britain, wanted to see the surroundings. We went to the Moravian-Silesian and Zlín regions. Here, and the fool understands that these are super agents more abruptly than James Bond, they were looking for an object for sabotage. And since the term of the visa ended on the 16th ... Precisely because Petrov and Bashirov are jack of all trades in the field of special operations, I propose to consider the versions of the events that they allegedly have done now in the Czech Republic.

It is not for nothing that I called this version a simple, primitive one. There are no romantic or patriotic motives in it at all. Therefore, it is not interesting for the press. Especially during the aggravation of international relations. So…

The Czech army, being part of the ATS armies, had the appropriate weapons and ammunition. After the collapse of the OVD, a lot of "Soviet" ammunition remained in the warehouses. And time goes by. Everything ages, becomes unusable and must be recycled. So the time has come for Soviet-made antipersonnel mines.

Only a reader who has little understanding of military affairs might think that disposal is simple and cheap. In fact, this is a rather dangerous and costly process. And very few states can carry out it at their factories and landfills. Most prefer to pay for disposal and transfer the ammunition to specialists.

One of those who offered their services to the Czech government was a Bulgarian businessman and merchant weapons, this is important, Emilian Gebrev. It was he who offered to destroy the mines in Bulgaria for a symbolic payment. The Czechs immediately agreed, the money was received. And in order to free his own arsenals, Gabrev was assisted in renting two warehouses (No. 12 and No. 16, the Imex Group company from the city of Ostrava) on the territory of the Military Technical Institute. However, for the Czech Republic this is quite common practice.

Now for some simple math. The Czechs write that Gebrev had already begun to take out ammunition when the explosion occurred. How many mines were removed is not known. How many exploded too. Isn't it a way to hide the supply of ammunition to anyone? It turned out very well. There are no mines, everyone's interests are respected, but the fact that the two were killed ... Nothing personal, just business.

Second version. The whole world is with us or we can help you in any way we can

At this time, the main hot spots where decommissioned Soviet mines would have been quite useful were the two states - Syria and Ukraine. And it is quite possible that instead of being destroyed in Bulgaria, mines would soon surface in these states.

It was not for nothing that I drew attention to the fact that Emilian Gebrev is a famous arms dealer. According to numerous publications in the Western press, the name of this person is known in both these countries.

Now the answer to the main question is why the explosion occurred? Let me remind you that 50 tons of ammunition exploded and two employees of the company were killed. It seems to me that the employees were engaged in sorting mines. Some part, it is obvious, must be disposed of, and those that are better preserved are sold. It was at this moment that the explosion occurred.

This version is supported by the fact that over the past years, Ukraine has really seriously cleaned the arsenals of Eastern Europe from Soviet weapons, equipment and ammunition. Civil war, destruction of its own military industry, departure of military production professionals ... All this became the reason that Ukraine was forced to buy old weapons from the former socialist organizations. countries.

It seems to me that supplies to Syria should be forgotten after the activation of Russian, American and Turkish units there. There are enough weapons there even without Gebrev.

By the way, the question may arise: how did all this get connected with the Czech police? The answer to this question is. Poisoning! In 2015, the "arms baron" was poisoned in the same way as the Skripals. The poisoners were able to poison, but could not kill to the end. Emilian Gebrev survived. True, the Czechs did not have a version of poisoning by Novichok. Perhaps, after appropriate revision, we will hear this version too.

I am far from presenting any action as the result of complex intrigues and operations developed by tough professionals. In fact, the pros do not work so rudely. Why build a house of cards that will fall apart after the first breeze, if you can put a stone? The more difficult the combination, the more likely it will fail.

If you want to see more, take a look around. And what do we see around? First, the unexpected recollection of the Czech police of a case that was investigated for a long time. Secondly, a special operation by the KGB of Belarus and the FSB of Russia to uncover a conspiracy to destroy President Lukashenko. Thirdly, on April 19, First Deputy Prime Minister and Foreign Minister of the Czech Republic Jan Hamacek was expected in Moscow, who was going to negotiate the purchase of a Russian vaccine against coronavirus.

Fourth, a tender is being held in Prague to conclude a contract for the construction of a new power unit at the Dukovany NPP, one of the participants in which is Rosatom. The contract, by the way, is worth $ 6 billion! And a very serious Chinese company has already been “knocked out” of the tender. Who is opposed to Rosatom? American-Canadian firm Westinghouse.

I do not know who is the author of the opinion circulated today about the connection between the statement of the Czech police and the disclosure of the conspiracy against President Lukashenko. Obviously, the arguments in favor of this version are rather controversial. And I did not see any reason to substitute the Czech Republic. The scale of the state is not the same. Not the scale of the scandal, against the background of the unfolding events in the world.

But it is very easy to connect Bashirov and Petrov with the Dukovany NPP. How to predict the actions of the Foreign Ministries of both countries, the Czech Republic and Russia. A statement about the involvement of "Russian saboteurs" in the explosion was made on Sunday, April 18, by the Minister of the Interior of the Czech Republic, First Deputy Prime Minister Jan Hamacek on the air of Czech television. The day before the visit to Moscow.

Thus, Gamasek actually refused to conclude an agreement on the supply of the Russian vaccine. Thus, he fulfilled the requirements of the EU and NATO, "without losing face." In turn, the head of the Czech government, Andrei Babis, is forced to respond to such a statement by his deputy. Today, April 19, the issue will be discussed in the government.

But Hamachek didn't stop there. It was the Foreign Ministry that declared 18 Russian diplomats persona non grata. The answer, 20 Czechs, naturally followed immediately. Relations between the countries are ruined for a long time. But this is not the most important thing!

Deputy Prime Minister and Minister of Industry and Trade Karel Havlicek said on Czech television that Rosatom would be barred from participating in the tender for the construction of a new power unit at the Dukovany NPP in the coming days. In my opinion, this is what Gamachek started this for. This is what he will receive or received millions of dollars of kickback for. And the rest, and what I mentioned, is just "muddy water" in which it is easy to fish.

How will relations between Russia and the Czech Republic develop further?

In conclusion, I would like to express my opinion about what will happen next. And is it so unexpected what happened. I just want to remind you of some recent fact from stories our relationship.

First of all, let me remind you how many times in recent years the Security and Information Service (BIS) has announced a huge number of Russian spies who have simply dammed up the Czech Republic. Remember the statements made six months ago. If you do not know the background of these statements, but take BIS's word for it, then the hair should stand on end.

The matter then came to a request from President Milos Zeman to the head of the Service, Michal Koudelka, about the names, appearances and contacts of these numerous spies. To which Colonel Koudelka, in retaliation for the five-year delay in the assignment of a general's rank, replied that he could not provide the lists for security reasons. To which he received another "idiot" from Zeman.

In fact, the BIS of the Czech Republic has long been in the same position as the SBU of Ukraine. Total control and execution of orders from overseas. Despite the fact that even to his own prime minister and president, the head of this Service cannot say everything. but in the opposite direction Koudelka is invulnerable. The President cannot remove him from office.

The Americans are stubbornly building a fence of gasket states that should "protect Western democracy from the barbarians from the East." Baltic States, Poland, Ukraine ... And now the Czech Republic. On the whole, we can already talk about another "cold war", about another collapse of the world into two, and maybe even more, camps in the future.

I am not inclined to consider Czechs as pathological slaves. Just as he is not inclined to consider as such Ukrainians, Poles, residents of the Baltic states. However, those who are now in the leadership of these countries are very actively driving their "electorate" into the stall. Maybe they forgot that people live in their states, people live who can get tired of all these games ...