"I have a kilogram of a sword, please!" 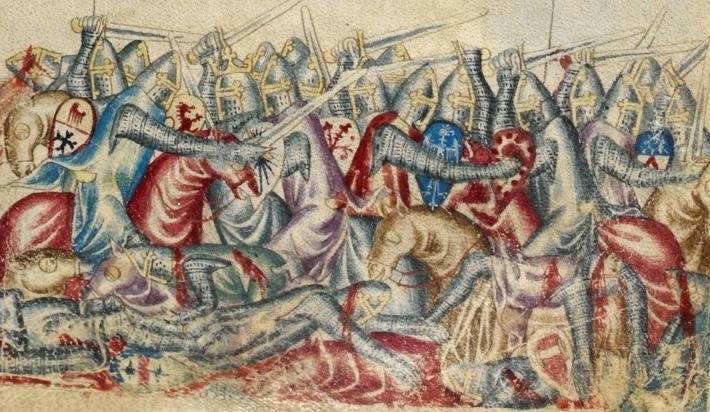 "... Each took his sword and boldly attacked the city."
(Genesis 34: 25)
History weapons. This material appeared spontaneously. I just met on VO a remark about waving an eight-kilogram sword. Well, I wanted to tell you once again about how much this weapon, which was popular in the Middle Ages (and in ancient times, too) actually weighed. Well, the collection of swords of the Metropolitan Museum in New York will help us in this story. All these swords can be seen in his exposition, and some are kept in storerooms. 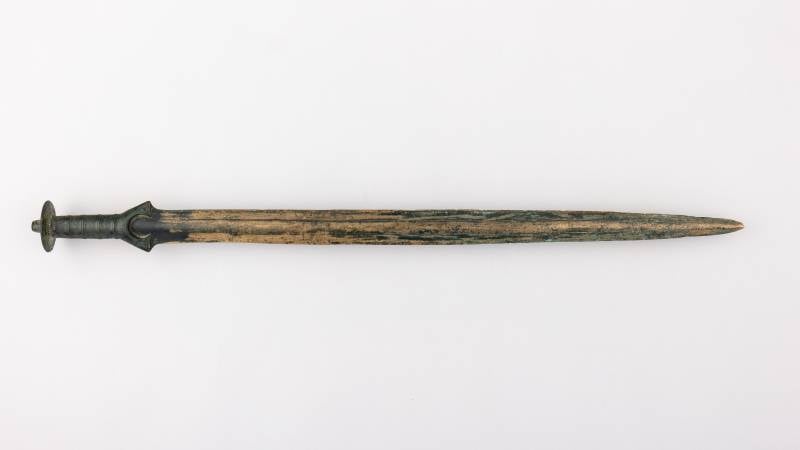 Bronze sword of the 73th century BC e. Central Europe. Length: 61 cm; blade length 5,7 cm; blade width 935,5 cm; weight 1 g. That is, less than a kilogram. Of course, you can overlay the handle with wood and wrap it in leather. Then it will just make it up to XNUMX kg.
The first swords appeared very early. And they made them from bronze. It was convenient, although not entirely. Because at first only a blade was cast from metal, and only then a wooden handle was attached to it. Experience has shown that this design does not allow chopping blows. As a result, both the handle and the blade began to be cast as a single unit. Such swords could both chop and stab. Armies armed with such weapons became massive. 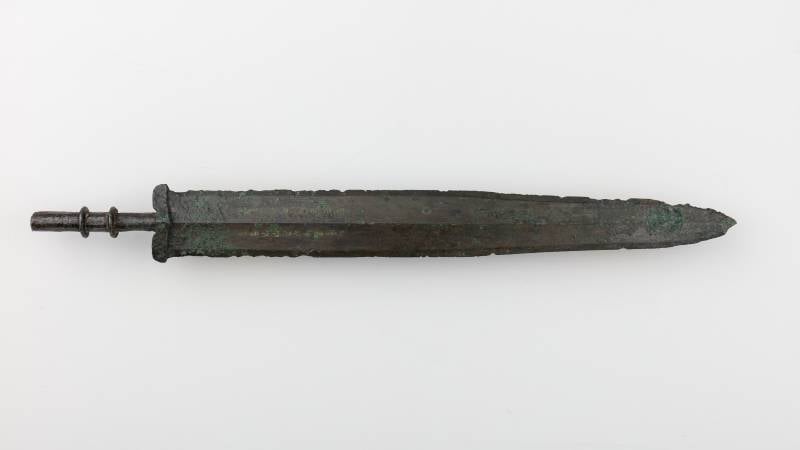 Bronze sword. China, V-IV centuries. BC e. The handle is missing a pommel. Dimensions: length 46,7 cm; blade width 5,7 cm; weight 734,3 g.
Kingdoms were built with bronze swords. Moreover, in one, the most famous among us - ancient Egyptian, the army was completely armed with bronze swords and daggers.

Casting and then forging in Europe were the Celts. Their swords in the XNUMXst century. BC e. were often bimetallic. That is, they had an iron blade, but a handle cast from bronze. The collection of the Metropolitan Museum of Art in New York has a very interesting example of such a sword, and together with a scabbard. 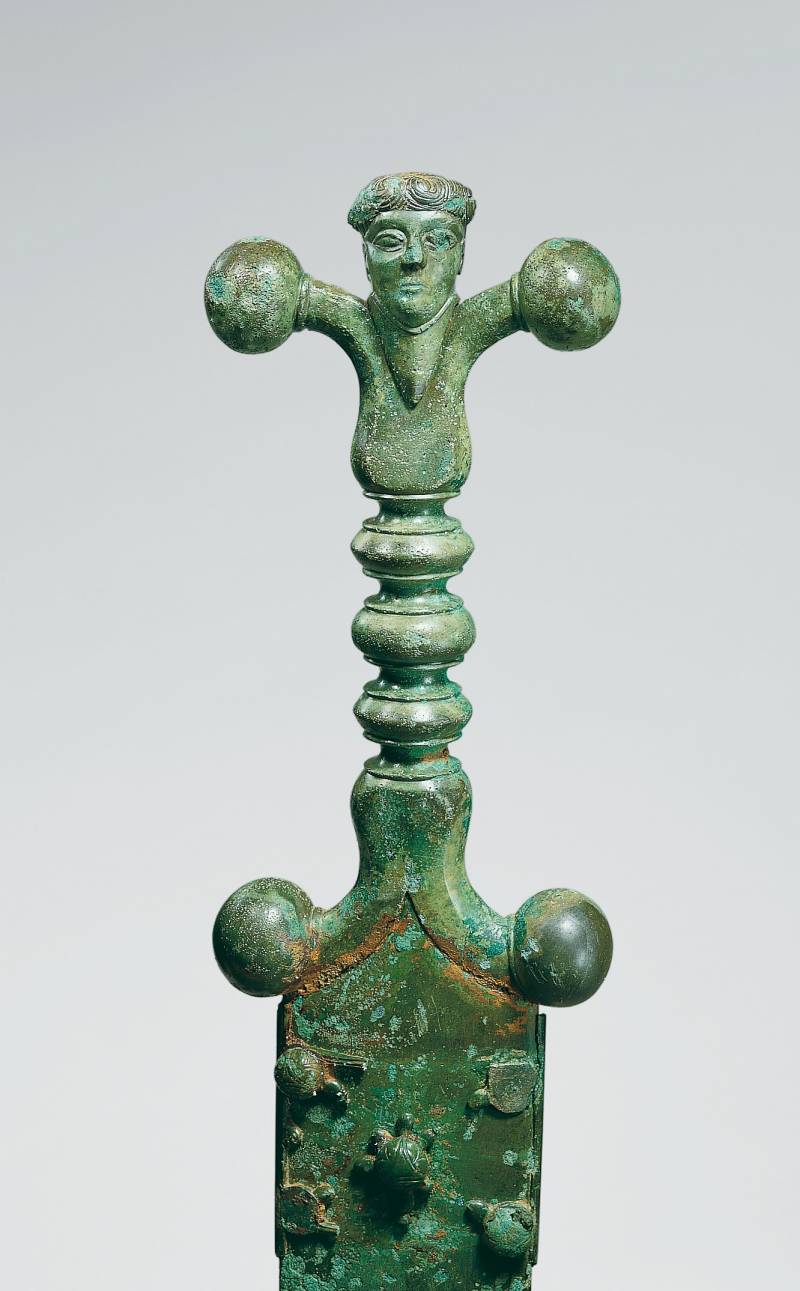 Sword and scabbard, approx. 60 BC e. This magnificent anthropomorphic Celtic sword is one of the best preserved. The beautifully modeled head that ends in the hilt is one of the finest surviving depictions of a Celtic warrior. Most likely, such a form of it should have had a talismanic meaning. The face is distinguished by large almond-shaped eyes, and the head has omega-shaped and neatly drawn hair. Although the scabbard has merged with the iron blade, the exquisitely crafted hilt makes it a striking testament to the technical ability of the Celts, the mighty conquerors of ancient Europe. The dimensions of the sword are 49,8 x 6,7 x 2,2 cm. For some reason, the weight is not indicated.
Such swords are of a type associated with the La Tene culture, named after an important Celtic monument on Lake Neuchâtel in present-day Switzerland and eastern France. Other anthropomorphic swords from various finds in France, Ireland and the British Isles show us the widespread distribution of the Celts throughout Europe.

However, already in the VI century BC. e. in Europe, they knew how to process iron and make swords from it. One such sword was found by archaeologists on the island of Cyprus.

Here is this sword. The blade was forged from either iron or possibly steel, but is now almost completely mineralized. Remains of traces of a wooden scabbard, possibly covered with leather. On the handle of the blade, the shank was edged with silver and lined with ivory. The only surviving rivet is bronze with a silver head. Period: Archaic period II. Materials: iron, silver and bronze. Dimensions: length 59,4 cm.

Not all swords in Europe, particularly in Greece and Spain, were straight. Known sword falcata or mahaira, dating back to the V-IV centuries. BC e. Found in Greece. Dimensions: length 54,6 cm, weight 0,7 kg
In the East, the rulers of the Sassanian period (224–651 AD) were almost always depicted with a sword suspended from their belt, the motive of a winner in battle. The swords were made of iron with wooden sheaths, which were covered with metal, and, in particular, among the rulers, they were always gold. Such swords were borrowed by the Sassanids from the Hunnic nomads who roamed Europe and Asia in the sixth and seventh centuries, shortly before the beginning of the Islamic era. They had a long and narrow handle with two finger rests, and the scabbard had a pair of U-shaped protrusions, to which two straps of different lengths were originally attached. The straps held the sword suspended from the warrior's belt in such a way that he could easily pull it out, even while sitting on horseback.

Sword and scabbard, approx. XII century A.D. e. Sassanian Iran. The sword itself is encrusted with grenades and colored glass, and the surface is decorated with a pattern of overlapping feathers. The fact that a similar pattern can be seen on the helmet of the Sassanian warrior led scientists to speculate that it may be a symbol of the Zoroastrian god of victory, Verethragna. Several other swords of this type are known, some of which are mounted in gold trim, some in silver. Stylistically and technically, they are all very similar, although this example is by far the most beautiful. Materials: iron, gold (wood), garnets, glass, gilded bronze. Dimensions: length 100,3 cm

Japanese iron sword with a bronze pommel of the Kofun era, 300-710. Dimensions: length 96,5 cm; blade width 7,3 cm.
In Europe in the VIII century, the empire of Charlemagne was formed and the "Carolingian Renaissance" began. His warriors were dressed in chain mail and in scaly shells - horsemen who terrified their contemporaries with their iron armor and weapons. In addition to the long spear with a winged tip, their weapons were the long "Carolingian swords", which became European weapons for more than a century. They had a relatively small crosshair, a straight blade and a mushroom-shaped flat top.

"Carolingian Sword" from the Metropolitan Museum of Art in New York. The blade is most likely lenticular. Materials: steel, gold, silver. Dimensions: length 93,3 cm, blade length 80,6 cm, blade width 9,2 cm, weight 1048,9 g
The swords of the Vikings, the northern pirates who kept the whole of Europe in fear for more than two centuries, were carefully studied and classified by Jan Petersen, whose classification to this day is perhaps the best basis for their study. For his fundamental scientific work "Norwegian Swords of the Viking Age" (1919), he studied 1772 swords, of which 1240 were typologized. So when, as often happens with us, it comes to the fact that, they say, "all this is fake", it is clear that such an amount of rusty metal is simply impossible to forge, and most importantly - there is absolutely no need, since they are all found on the territory of Norway, although some also ended up in Sweden and Finland.

Viking sword, 95,9th century The sword is distinguished by an ornate hilt and a welded blade, indicating that it was worn by a high-ranking warrior, perhaps a Viking chieftain or a noble franc. The braided copper wires on the pommel give it an elegant look and at the same time indicate a high level of metalworking. The blade was forged from intertwined steel and iron rods. This technology has resulted in a strong yet resilient blade with a characteristic twisted pattern on the surface. Such blades were prized for both their practical and decorative qualities. Dimensions: length 81 cm; blade length 11 cm; blade width 1021 cm; weight XNUMX g.
However, we are now least of all interested in the statements of the Novokhronolozhites, how many are the length and weight of the blades. So, the longest of the found swords (and the only one) has a blade length of 90,7 cm. All other swords are shorter. The heaviest samples weighed about 1,5 kg: 1,443 kg, 1,511 kg, and one just 1,9 kg. But the lightest weighed from 0,727 to 0,976 kg. At the same time, the length of the handle of 435 swords was from 8,5 to 10 cm. And there were those in which it was 8–8,5 cm. That is, the hands of men of that time were smaller than they are now, and the men themselves were also smaller in stature than modern ones. What are their swords in 8 kilograms?

Before us is a classic knightly sword of the early XII-XIII centuries, entirely made of steel. The long crosshair and pommel in the form of a paranus - a southern nut, all this corresponds to another typology of European swords - the typology of Ewart Oakshott, who received the honorary nickname "master of swords" for his research in this area. Sword length 95,9 cm; blade length 81,6 cm; crosshair width 17,1 cm.Weight 1158 g 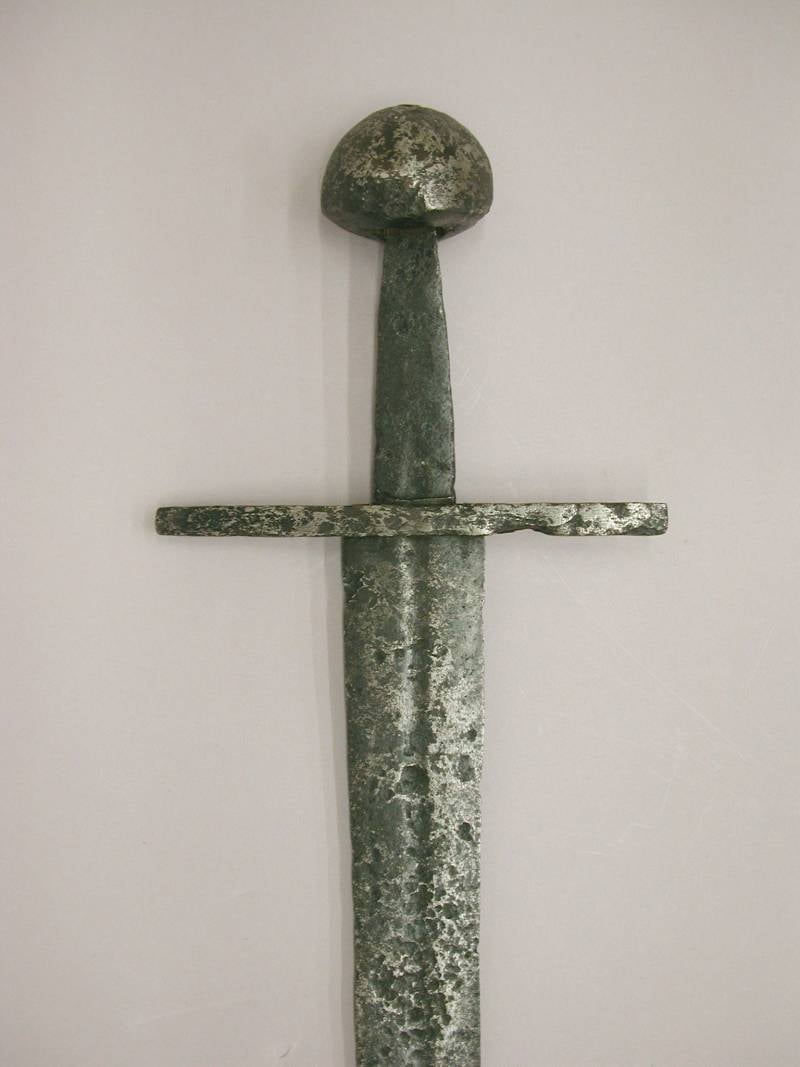 And this is his handle in close-up. 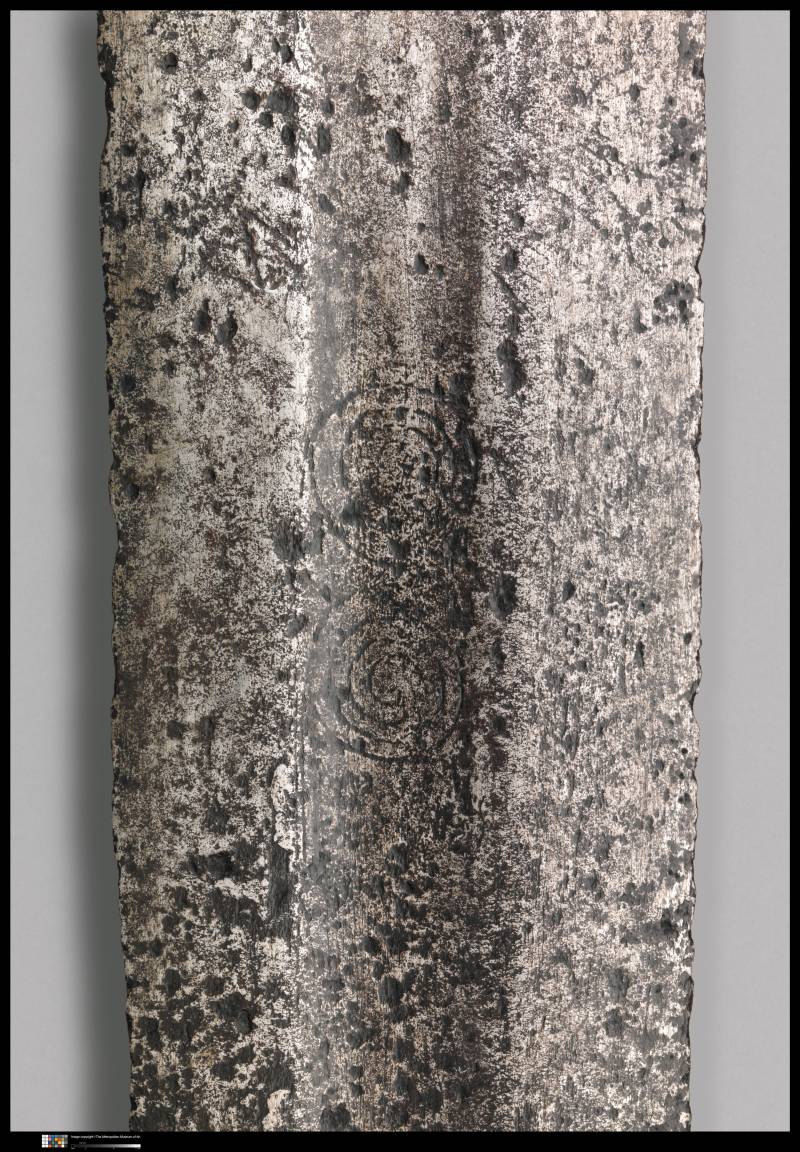 To lighten the weight of the blade, the valleys on it are wide. Even the mark of the master who made it is visible.

Italian sword of the XIV-XV centuries. Dimensions: length 104,4 cm; blade length 88,3 cm; crosshair width 17,5 cm; weight 1219 g
With the advent of solid forged armor, cutting swords gradually turned into stabbing ones, because it became almost impossible to cut through such armor, but there was hope to pierce. In addition, it was possible to get into the joints between the plates of the armor. Some swords therefore even stopped sharpening. For what? When the injection became their main task!

British sword of 1500 type "one and a half hands". A blade with a rhombic cross-section, designed for stabbing. The crosshair is S-shaped. There are two annular stops on the handle. Materials: steel, silver, leather. Dimensions: length 116,2 cm; blade length 86,5 cm; crosshair width 21,6 cm; weight 1190,7 g
One and a half-handed swords could be used by both infantrymen and horsemen, who usually carried them at the saddle on the left. Their main task in battle was to help the rider fend off the infantrymen, but in a knightly duel it was also an indispensable thing - in fact, it was a universal sword, light enough for them to swordsmanship, but heavy to hit a soldier dressed in armor. They were also called bastard swords ... 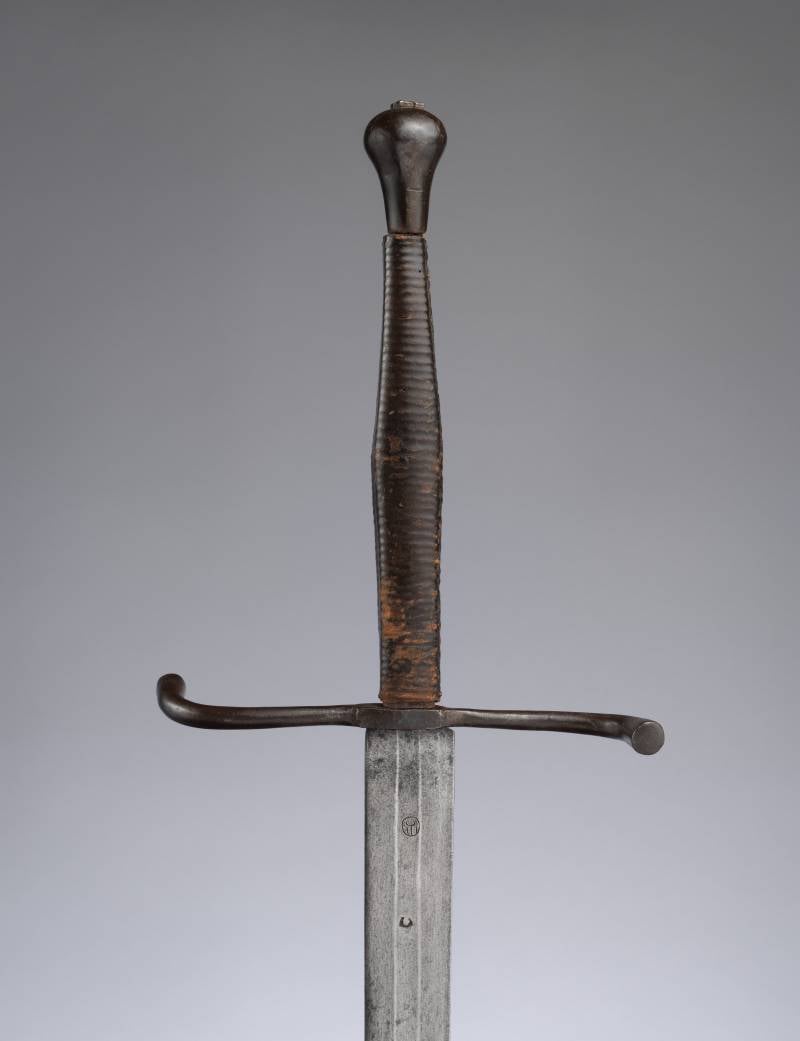 But this is a very interesting French sword "with a ring". OK. 1500 g. Dimensions: length 101 cm; blade length 85.1 cm; crosshair width 23.3 cm; weight 1190.7 g. The ring at the crosshair was required in order to protect the finger, which was inserted into it. With such a sword, it was possible to inflict both chopping and stabbing blows, like a rapier. It was from these swords, by the way, that they went ...
But we will tell about this type of cold steel some other time ...