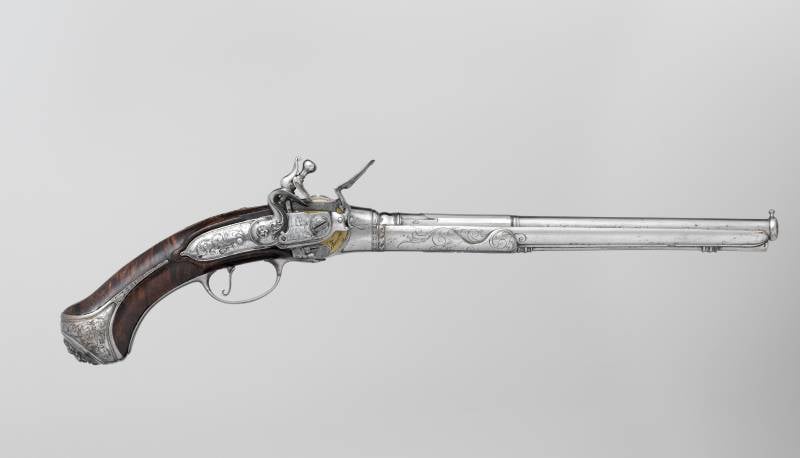 "... the speed of a unicorn he has"
(24 numbers: 8)
History firearms weapons. So, last time we found that in order to increase the rate of fire, gunsmiths began to release pistols and even shotguns with two, three, four, six and even seven barrels. This increased the capabilities of the shooter, but made the weapon bulky and heavy.

How to combine a horse and a quivering doe so that the weight is not particularly great, and there is only one barrel, and there are many shots? And all this in the presence of black powder and round lead bullets.

Agree that this greatly narrowed the capabilities of weapon designers, so in the beginning they took the simplest path and created the Espignol system. It was an ordinary cast copper barrel, worn with a shank on the handle (a typical weapon of the 5th century), into which the ignition cord was inserted until the very end, and then the charges were sequentially inserted, which were carefully insulated with wads from each other. Espignol acted like this: the cord was set on fire, and the shots from the barrel followed one after the other at short intervals. There could be 7-XNUMX shots and, considering that there could be several shooters with such a weapon, it turned out that real automatic fire was being fired at the enemy.

The advantage was also that in this way it was possible to load any firearm of that time and, having given a "burst" from it, then shoot from it with single shots, setting fire to the charges through the ignition hole. Of course, as soon as the powder gases break through somewhere to the rear charges, the barrel burst. 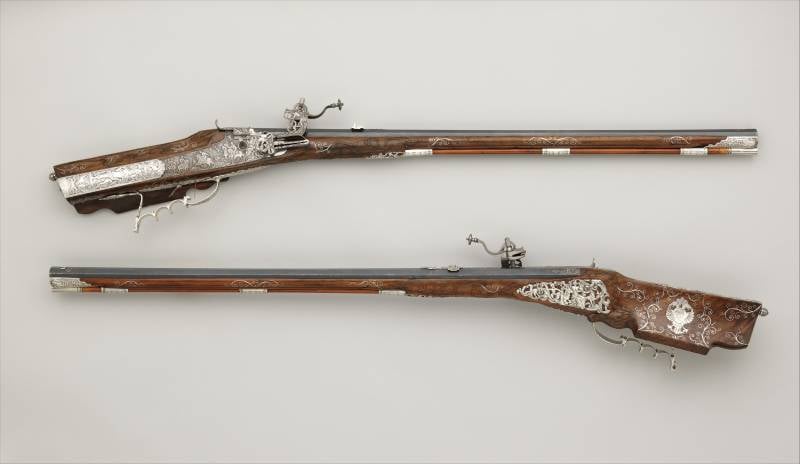 Hunting set made by Kaspar Neureiter of Bohemia for Emperor Leopold I (1640-1705). OK. 1670-1680 Prague. Since most guns fired only one round and then took a long time to reload, wealthy hunters often ordered sets of two or more guns, which allowed them to quickly fire a second shot. Therefore, it was the hunters who became the first customers of multiple-shot rifles. Material: steel, silver, wood (walnut). Length: 110,2 cm; trunk 81,4 cm; caliber 13,8 mm. Weight 4167 g. Metropolitan Museum of Art, New York 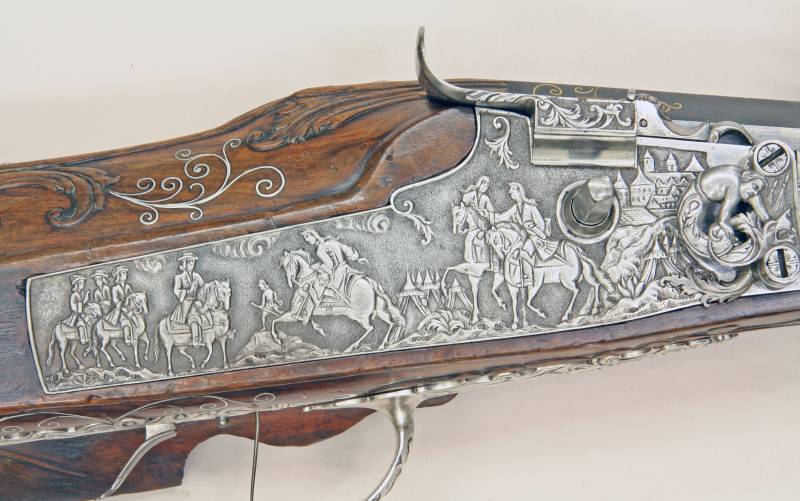 A real work of art, isn't it? Metropolitan Museum of Art, New York
Despite this drawback, the system has become widespread in Europe. For example, in England in 1785 a single-barreled multiple-shot pistol was released, in which one flintlock ignited several charges in succession. He moved after each shot back to the next firing hole, thanks to pressing the second "trigger". Of course, the shooter had to add gunpowder to the shelf after each shot and cock the hammer, but it was still faster than every time, besides, pouring gunpowder into the barrel and hammering a bullet with a ramrod. Here, all these operations were carried out leisurely, in advance, which allowed the owner of such a pistol in a difficult situation to shoot several times in a row, spending a minimum of time on this.

In 1800 in London the gunsmith H. W. Mortimer made the same device, a gun, in which the lock was moved from the barrel to the butt. However, everyone was surpassed by the prototype musket of 1815, which had two flint locks on the barrel at once! The first, when triggered, set fire to a "garland" of 11 charges, the 12th charge was a reserve one and was set on fire by the second lock, thanks to which the soldier could use it as a single-shot one. 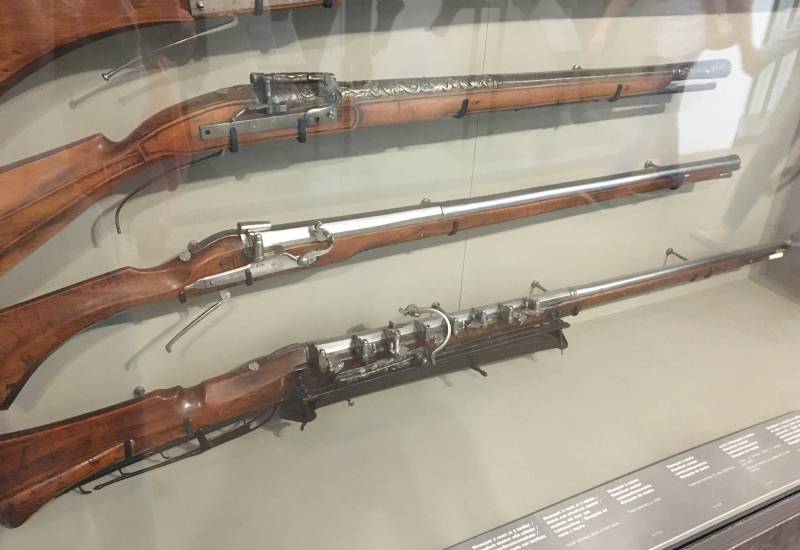 A similar eight-shot gun is known from the hunting arsenal of King Louis XIII, and even with a wick lock. Such miracles were already made by European gunsmiths at that time! Army Museum in Paris. Photo by the author
Now imagine what the battlefield would have become if the British army had adopted such a musket?

A cloud of smoke, formed by a myriad of shots from just the first line, would completely cover the target from the shooters. The enemy soldiers (after their first comrades had fallen) could well sit down and wait out all this destructive fire, and with their return volley, as soon as this smoke began to dissipate, inflict no less losses on them. So the game, as it turned out, was absolutely not worth the candle!

Kaspar Kalthoff began his career as a gunsmith in England, but because of the revolution he was forced to move first to his homeland, to the Netherlands, then to Denmark, but after the restoration of Charles II he was able to return to London. It was he who made the first multiple-shot gun, and even with a wheel lock, and then released several models with percussion flint locks. Moreover, the seven-shot rifle he made as a diplomatic gift ended up in Russia and ended up in the possession of Tsarevich Fyodor Alekseevich, and then in the collection of the Kremlin Armory. There is a similar gun in the State Hermitage. Moreover, it acted due to the work with the trigger guard, which was at the same time the ammunition feeder lever.

A fifteen-round magazine-type hunting rifle (albeit a flintlock!) P. Kalthoff's system. Master Charles Cousin, Paris, c. 1710 The bolt with gunpowder and bullets was activated by turning the trigger guard. Variants with a wheel lock are also known. By the way, today it is on display at the State Hermitage Museum in St. Petersburg. This is how mysterious the paths of some artifacts are. Material and technique: steel, wood, horn; forging, carving, engraving, bluing. Length 128,4 cm; caliber 14,5 mm. Inv. No. З.О.-638. State Hermitage, St. Petersburg
Peter Kalthoff (Caspar's namesake) even received a patent in the Netherlands in 1641 for his flintlock rifle with a gunpowder magazine in the butt and a bullet magazine in the forend. 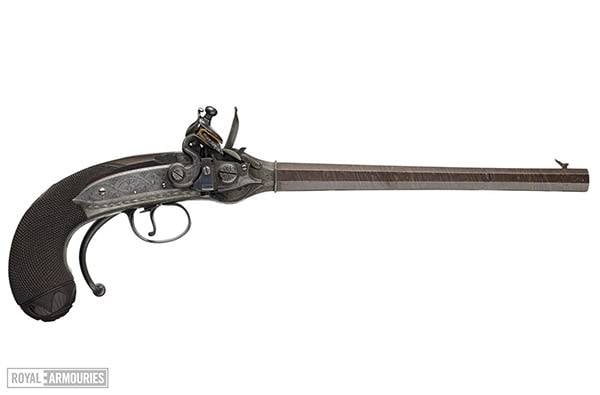 Lorenzoni pistol 1795 Royal Arsenal, Leeds
There were also a number of gunsmiths working on similar systems. However, almost the most perfect example of such a weapon was managed by Mikael Lorenzoni from Florence, who worked in the late XNUMXth - early XNUMXth centuries. 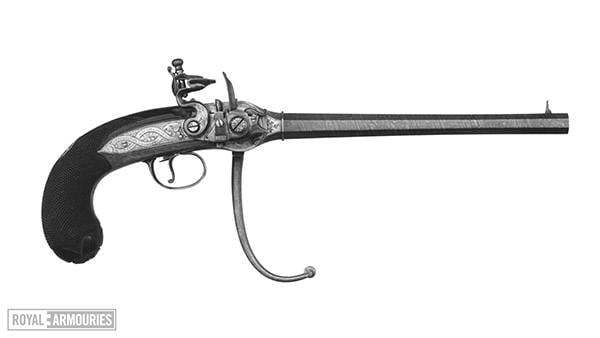 Pistol of the Lorenzoni system 1795. The reloading lever is lowered down. Royal Arsenal, Leeds
Not many pistols made by him have survived, especially those signed by him, while quite a few imitations are known. Lorenzoni was born in Siena and lived all his life in Florence, where he died in 1733. His services were used by the Medici court, where he competed with the gunsmith Matteo Cecchi, whose name was Aquafresca (1651-1738). The earliest report on Lorenzoni is the mention of a multiply shotgun, acquired from him in 1684 by the elector of Saxony, Johann George III (1647-1691). 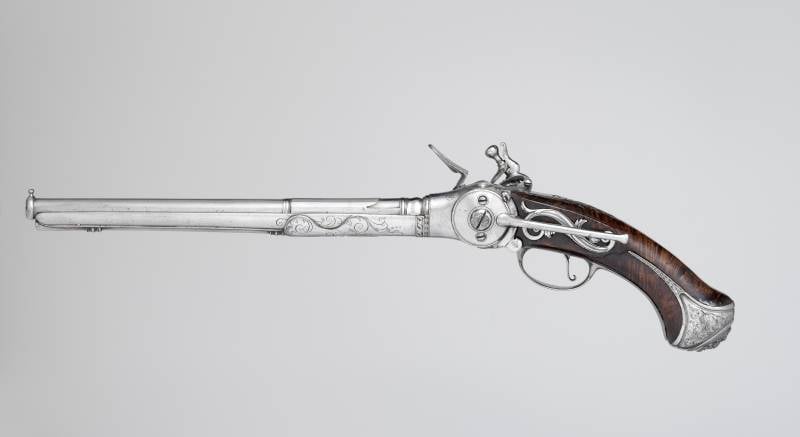 Lorenzoni pistol from the collection of the Metropolitan Museum. The lever of the reloading mechanism is clearly visible
As for the pistol signed by "Lorenzoni" from the collection of the Metropolitan Museum of Art in New York, it has a walnut grip, and the engravings on it refer to drawings published by Claude Simonin (1635-1693), Adrian Rainier the Younger (approx. 1680-1743) and Charles Reignier (about 1700-1752) (both called "Dutch"), and resemble French in style. 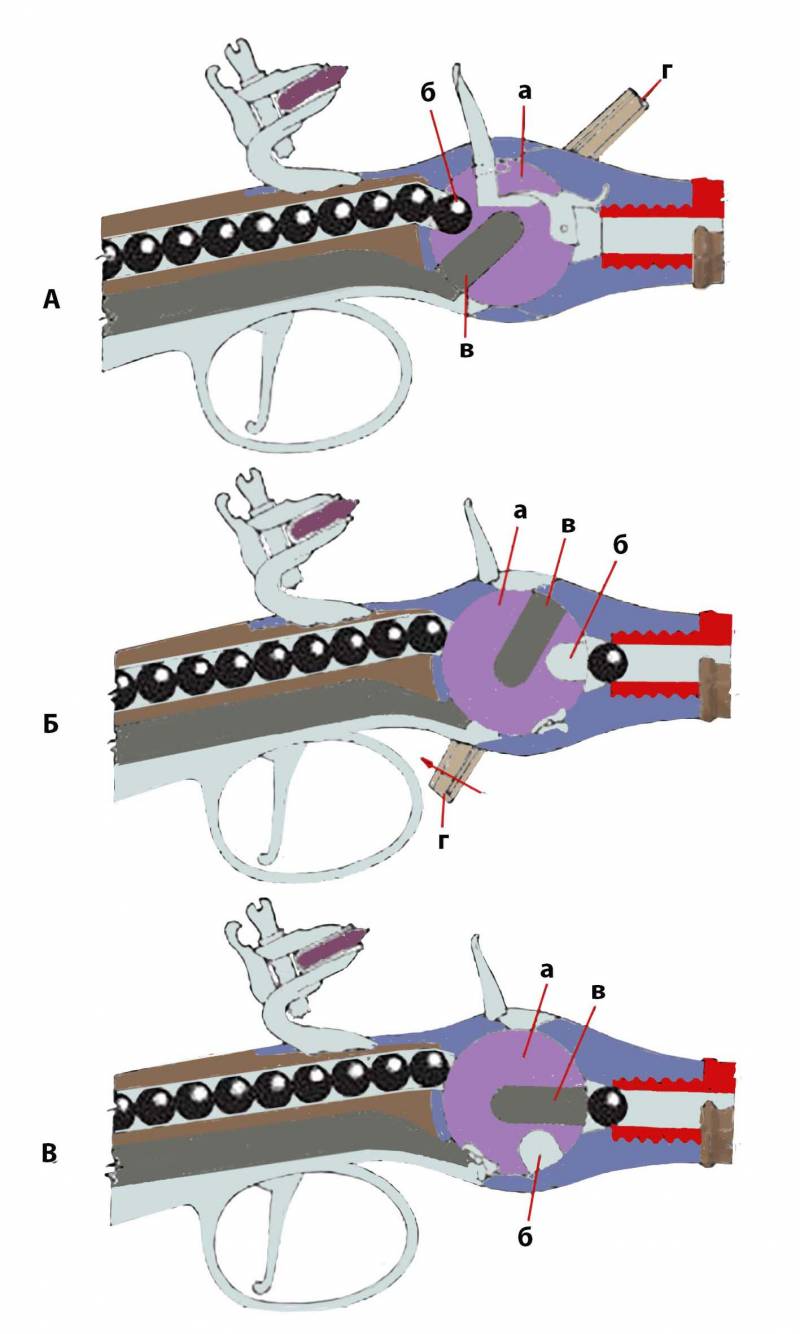 The sequential scheme of the Lorenzoni system: A - when the lever "d" is turned, a bullet "b" hits the bolt assembly "a", and at the same time the powder is poured into the chamber "c"; B - bullet "b" hits the bore, and lever "d" goes down until it stops. In this case, the trigger with the flint is cocked, and the priming powder falls on the shelf, which is closed with a flint; B - now the powder chamber "c" stands against the bullet in the barrel, and the hole in the bolt assembly (not shown here) against the powder shelf. To make a shot, you just have to pull the trigger! Fig. A. Shepsa
The Lorenzoni system was a significant improvement on the mechanism developed by the Danish gunsmith Peter Kaltoff (d. 1672) and used by the gunsmiths of Northern Europe in the third quarter of the XNUMXth century.

Although it was complex, it allowed up to ten consecutive shots to be fired, and for reloading it used two separate magazines for gunpowder and bullets hidden inside the grip. To load the weapon, the pistol is held with the barrel down, and the steel grip on the left side is turned one hundred and eighty degrees so that the gunpowder and bullet hit two chambers in the cylindrical brass breech. Then the handle is turned in the opposite direction to its original position. In this case, the bullet and gunpowder with the barrel fall into the barrel. Moreover, at the same time, the trigger is cocked, the closed valve opens, and the priming powder is poured onto the shelf.

Experience has shown that this is the most reliable technology for creating practical multiple-charge firearms before improving revolving mechanisms. Therefore, it should come as no surprise that the Lorenzoni system was used by gunsmiths throughout continental Europe and the UK more than a century after its invention. 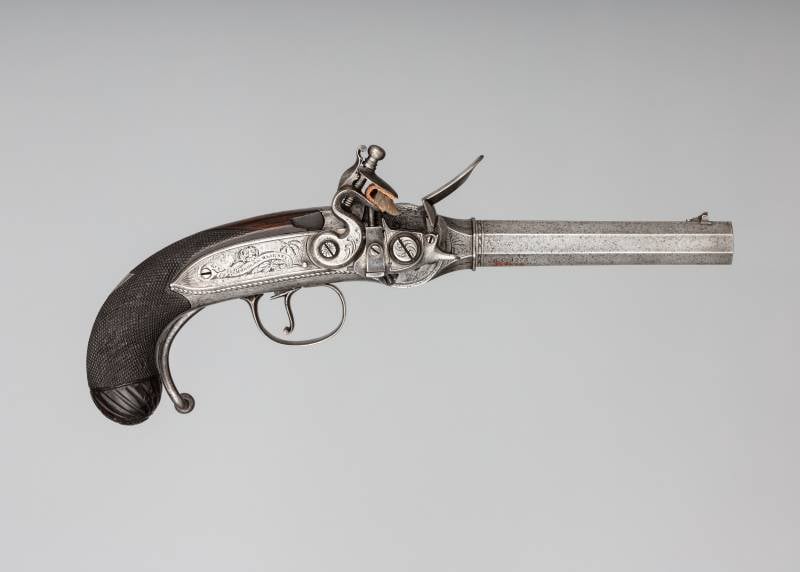 Flintlock pistol with Lorenzoni mechanism, approx. 1798-1799 Gunsmith Harvey Walklate Mortimer. Newcastle-under-Lyme, 1753-1819 The gun belonged to Admiral Nelson. Dimensions: length 36,8 cm.; barrel length 15,2 cm. Caliber 14 mm. Weight 2925,7 g. Metropolitan Museum of Art, New York
At the end of the 1741th century, it became especially popular in Great Britain, where it was used by such London gunsmiths as Henry Knock (1804–1753) and Harvey Walkleight Mortimer (1819–1758). The Met's collection includes two Lorenzoni pistols by Harvey Mortimer, one of which is a rare specimen bearing the coat of arms of Vice Admiral Horatio Nelson (1805–XNUMX). 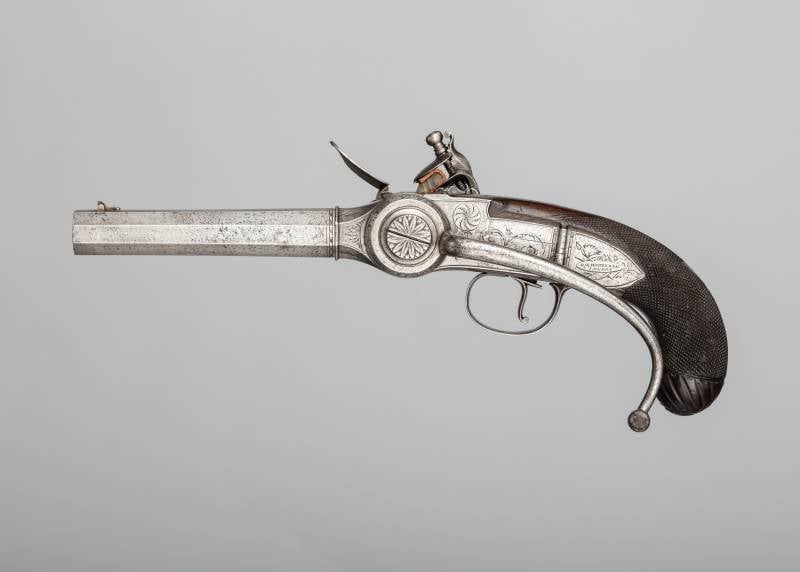 Flintlock pistol with Lorenzoni mechanism, approx. 1798-1799 Note that behind the lever is the hinged charger door. At the top, a round lid covers the hole for bullets, and the lower rectangular "box" serves as a receptacle for gunpowder. Metropolitan Museum of Art, New York
True, the invention of Lorenzoni is also credited to the Italian gunsmith Giacomo Berselli from Bologna and Rome, which, however, does not detract from his merits. Moreover, Lorenzoni made not only pistols, but also guns, using three versions of his mechanism, differing only in the location of the powder container and the installation of additional devices. 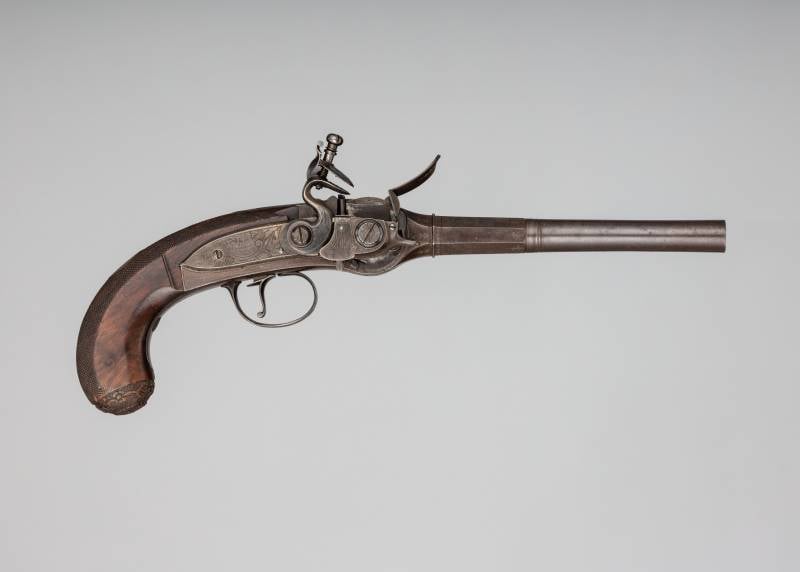 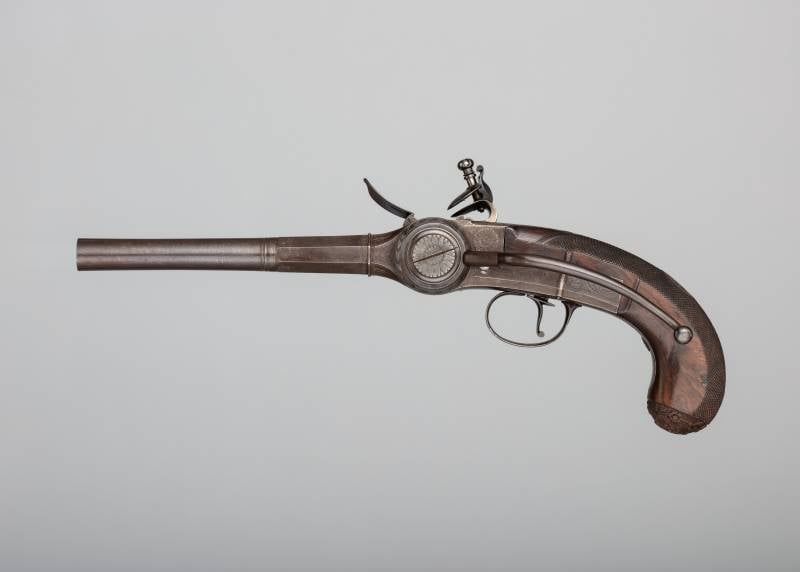 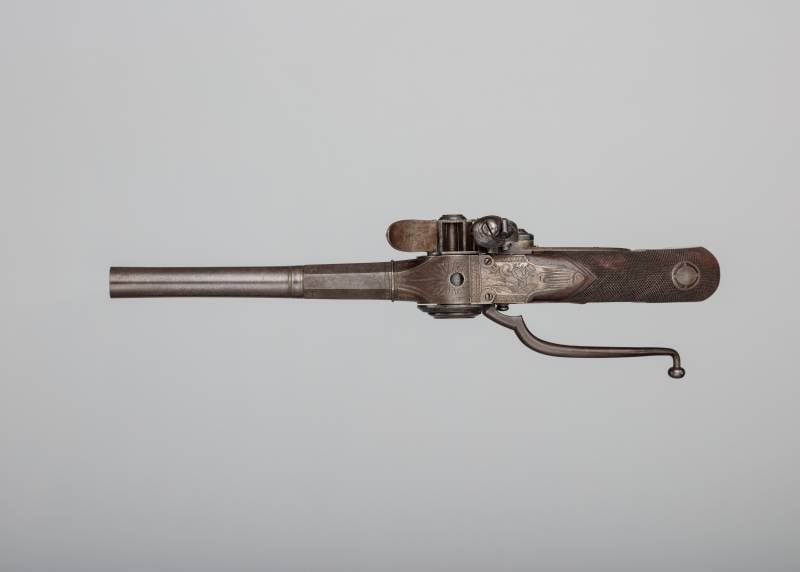 The same gun. View from above. The powder shelf on the right is open. Metropolitan Museum of Art, New York
English pistols of this type were distinguished by their high workmanship, which was characteristic of the level of production achieved by this time in England.