The Truth About Dachau - Immorality Cubed 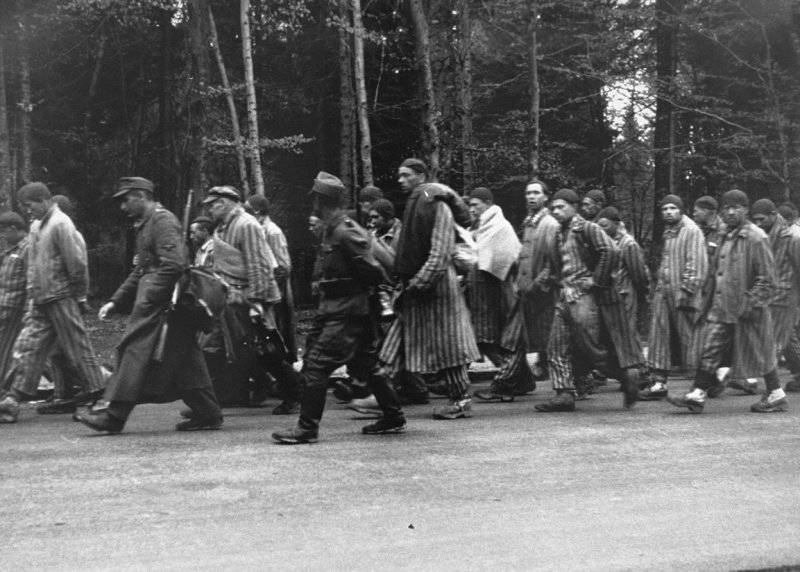 March of the prisoners of the Dachau concentration camp. Source: waralbum.ru
The first concentration camps of the Nazis appeared before the war. In a small ancient German city in the south of Germany, not far from Munich, back in 1933, the first experimental site for anti-human experiments was opened. Today this place is a symbol of fascist atrocities against people, where the matrix of the death camp was created.

In 1933, on March 22, in this German town of Dachau, a project was launched to work out a system of psychological and physical reprisals against the unwanted. It was planned that dissidents should be punished without fail. At that time, the opponents of the regime included communists, socialists, oppositional religious leaders, etc. All of them were intended to be kept in a special place before the start of the war. Where social engineering techniques will be practiced. This place has become an experimental laboratory for the mental transformation of oppositionists to the German regime through unprecedented torture and abuse.

Today, any experiments on people, especially medical ones, are condemned by the international community, considered immoral and prohibited by law. Personal consent of a person is now mandatory for any even non-hazardous research.

During the trial of Hitler's experimental doctors, the terrible realities of the sophisticated abuse of tens of thousands of prisoners of Hitler's concentration camps were revealed.

The essence of these atrocities, among other things, was also Hitler's intention to "bring out" some superman. No matter how absurd it may sound, the Fuhrer really, before the start of World War II, had a maniacal idea to create a super warrior. It seems that Adolf's fix tried to implement this idea in that very Dachau.

The camp itself was a huge training ground; it was located on an area of ​​over 200 hectares. A tall wall protected him from prying eyes. This first social laboratory for the refining of a person was, of course, not intended exclusively for the Russians. In the course of the experiments, immigrants from Ukraine, Austria and other countries were also killed here. Including the unreliable Germans themselves. The main contingent of this experimental base in Dachau is political prisoners.

It seems that the main purpose of this camp was precisely to eliminate the political opponents of both Hitler himself and the Third Reich as a whole. It turns out that the site itself in Dachau appeared only a few months after Adolf came to power.

From the revelations of the commandants, as well as the curators of Dachau, it became known that the true purpose of this social institution was formulated sharply: it was a kind of plant for the processing of organic waste. Not usual, but anthropological. Yes, yes, the fascists in Dachau cleansed the Aryan race of "genetic waste", as they put it. 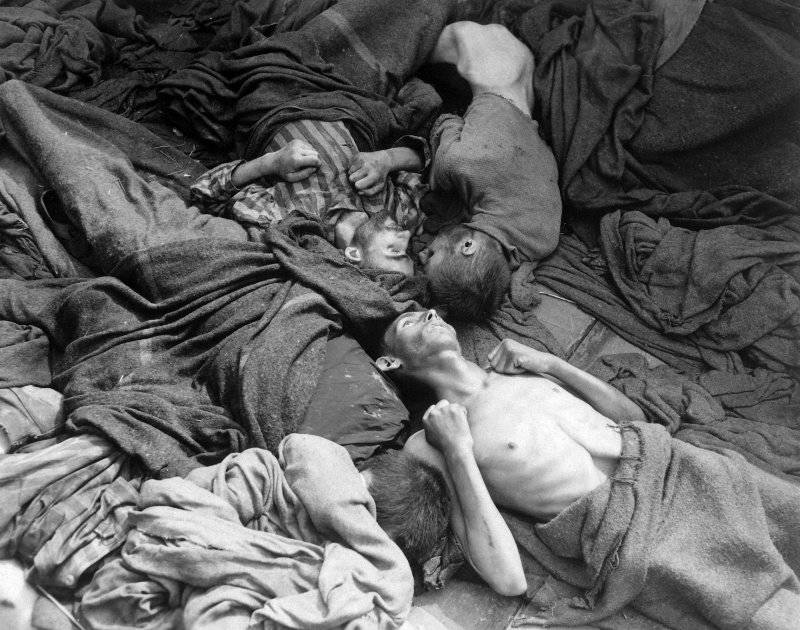 According to local legend, the inhabitants of this Bavarian town of Dachau once dared to vote not for Hitler, and the voters here voted almost unanimously against the Fuhrer. So, for the edification of the recalcitrant fellow citizens, this place was allegedly chosen for a barbaric experiment on "reforging" the unreliable. When the Fritzes chose the location for the gas chambers and stoves, they deliberately took into account the local wind rose. The Nazis wanted the wind to constantly bring to the streets of this town, which once dared to demonstrate rebelliousness, the smell of burnt human remains.

So, the Dachau concentration camp was built not far from the city of Munich. It contained thirty-four free-standing barrack blocks.

The Germans have equipped this institution with the best modern technology for experiments on people. Plus, they gathered there highly qualified specialists in this profile.

For 12 years, sinister experiments have been conducted behind closed doors. Later, at the international tribunal, it was announced that the criminal experiments were allegedly dictated by medical needs.

In total, a quarter of a million people were subjected to violence in Dachau for pseudo-medical purposes. But out of 250, more than 000 people died from sadistic experiments. All of them were young and healthy, but they were killed deliberately by fascist false doctors in the course of their crazy experiments.

Now we know about the tragedy that took place behind the high fences of the concentration camp for a dozen years from court materials, as well as from the authentic testimonies of those who managed to survive there then.

So, it is known that the captives wore various marks. Prisoners for political reasons were tagged with a red triangle, which they had to wear on their clothes. The Jews had a yellow mark. Homosexuals have pink. The criminals were tagged with a green patch, etc.

As for the citizens of the Soviet Union, they did not stand on ceremony with them: the Fritzes in Dachau preferred to use them as human targets for German recruits who were trained in shooting. After such shooting, wounded Soviet prisoners of war were usually left directly at the training grounds, or they were still half-dead sent straight to the furnaces of the crematorium.

Psychiatrists also carried out many experiments on the prisoners of Dachau. Usually healthy people were selected for this. They were tortured and punished to break their will. The unfortunate experimenters tried to establish empirically how, by purely medical methods, to prevent, say, performances and unrest.

There were also special machines and devices in Dachau to teach the so-called guilty ones. The prisoners were punished for any reason and were not spared, because there were too many experimental subjects - the concentration camp was overcrowded. 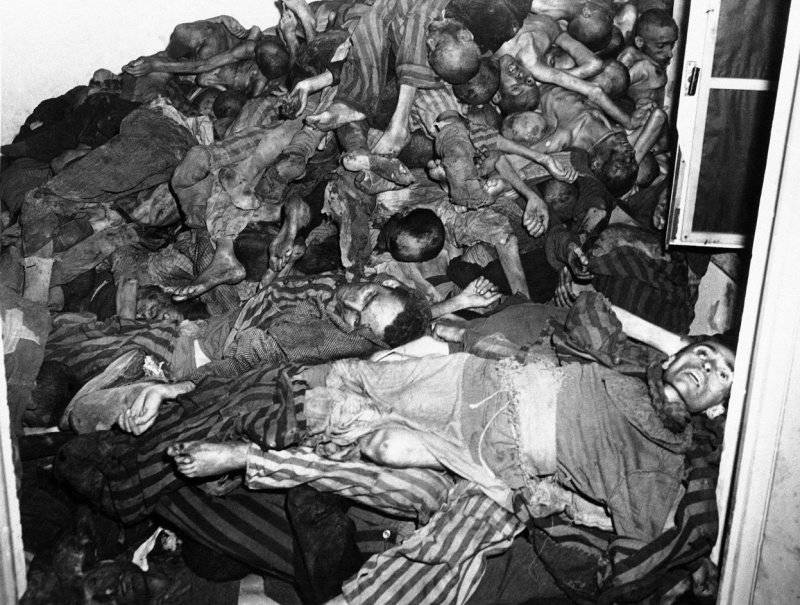 Dachau Crematorium. Source: waralbum.ru
There are eyewitness accounts. For example, the juvenile prisoner of Dachau, Anatoly Soya, left his memories.

It turns out that Hitler dreamed of an army that could not be defeated. From his point of view, for this, the soldiers of the Wehrmacht would have to have some kind of superpowers. But what did the Nazis mean by this? It was believed that such a superhuman could be created in the course of medical experiments. For example, in Dachau.

This is why healthy people from twenty to forty-five years old were selected for this, in fact, laboratory of social engineering.

True, the selection of living "material" in this institution was also carried out in special age groups. For example, according to the stories of Anatoly Soy, he was in a detachment, which included experimental subjects from fourteen to sixteen years old. This category of living "genetic material" was intended for experiments to create superwarriors. It was adolescence that was suitable for the experiments of the fascists concerning the regulation of human growth.

Anatoly, in the course of these investigations of the fascists, suddenly fell ill. And with a fever he was transferred to another barrack, where a block was located for another type of experiments on people. In the barrack where the boy found himself, people were infected with various rare tropical infections. And we watched the torment of the subjects.

Fortunately, the teenager managed to hold out until the moment when he was injected with an antibiotic.

The experimenters found that the child fights a viral infection well, and set out to test new drugs and their combinations on him. Anatoly was lucky. The technique studied on it gave an effect. And he miraculously recovered.

According to A. Soy, there was also a special box in the concentration camp, where those infected with tuberculosis were kept. People there were deliberately brought to a very serious condition: and tubes were inserted to drain pus. Fascist doctors tested drugs on such patients. It was important for them to allow the disease to progress first, so that later, in a critical situation, they could test various antidotes on people, choosing the most effective ones. 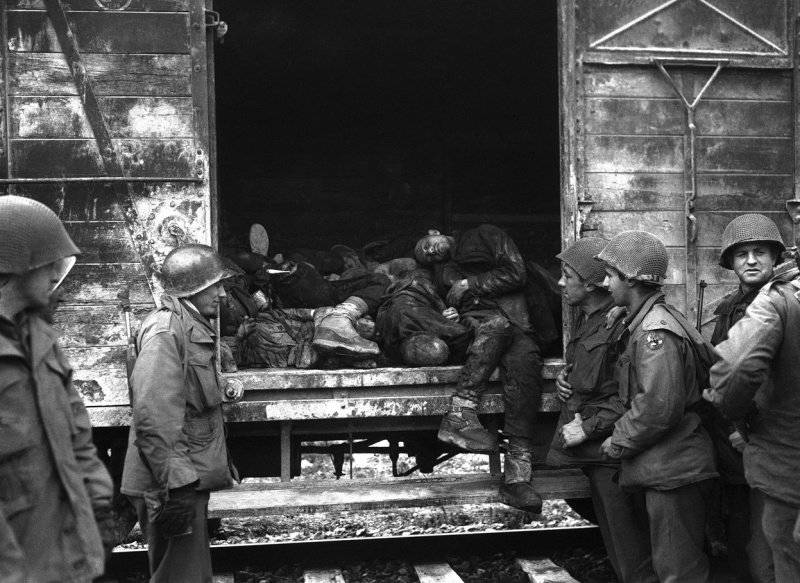 American soldiers at the carriage with the remains of Dachau prisoners. Source: waralbum.ru
In the course of the investigation of the crimes in Dachau, it was revealed that in the dungeons of the concentration camp, the Germans tested numerous medicines and various medical methods directly on people. In addition, experiments were carried out to study the effects on humans of different environments. Moreover, all these experiments brought suffering and pain to the subjects.

So, it is known that during the Great Patriotic War, a doctor, specialist in tropical medicine, Klaus Karl Schilling, in Dachau infected prisoners with malaria. Some of the subjects died from infection, others from experimental drug injections. Investigation revealed that this sadist conducted experiments on thousands of Dachau prisoners. The health of the survivors was irreversibly damaged.

The German physician Sigmund Rascher also performed sadistic experiments on people in Dachau. He put prisoners in a pressure chamber, changed pressure and loads, simulating critical situations. People suffered and writhed, injuring themselves, dying. And those who survived lost their minds.

At the entrance to the Dachau gas chamber there was a sign "Shower". People realized all the horror of the experiments on them already during the test. It turns out that the Nazis studied on them, including the impact of various toxic substances and gases. Apparently, "for purely scientific purposes" the Germans sent the organs of prisoners who died from poisoning for testing.

All experiments at Dachau were commended by Goering. He especially praised Himmler for Rascher's experiments with a pressure chamber. It was not concealed that the results of research on people in Dachau were used in purely military interests, and the Reich did not spare money or "biomass" for experiments on people. 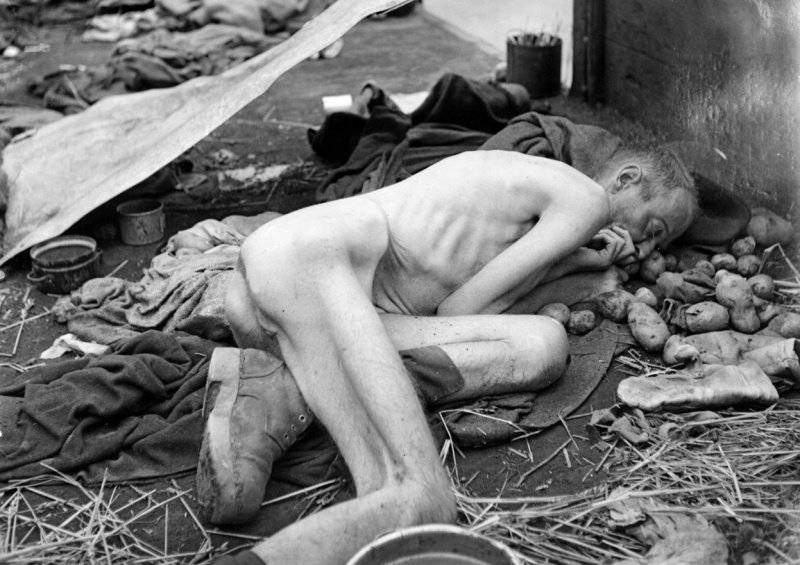 Prisoner of the Dachau concentration camp. Source: waralbum.ru
The same Rusher is also known for his barbaric research in Dachau on the effect of low temperatures on humans, simply put, on freezing a person. The prisoners were kept in the cold for many hours, doused or immersed in ice water. It was announced that the Germans were only exploring extreme situations with a decrease in human temperature to 28 ° C.

Of course, the German doctors did not use any anesthesia in their brutal experiments. Their victims either died or were crippled. And so that they did not blab out, they were eliminated.

All experiments were secret. The doctors were annoyed that the subjects yelled, especially when frozen. In particular, the fascist sadist doctor Rasher wrote about this. 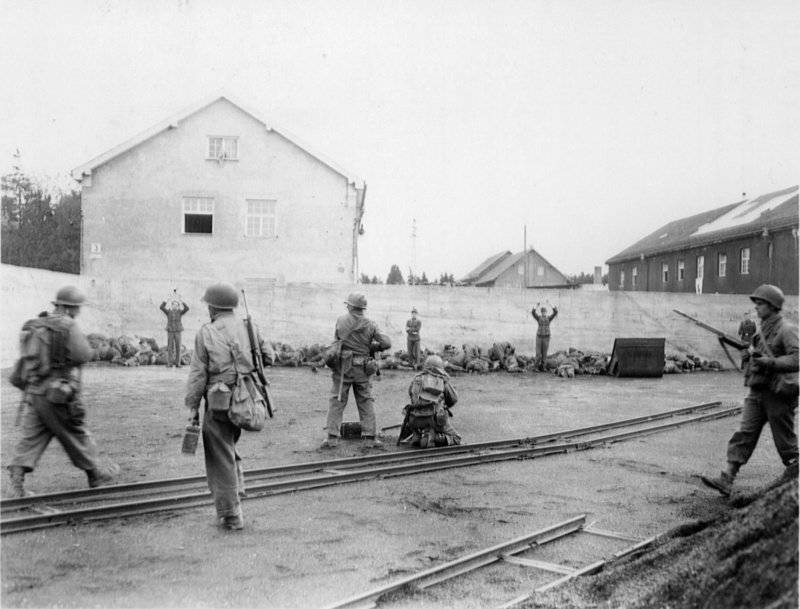 The shooting of the Dachau guards. Source: waralbum.ru
But this was not yet the height of cruelty.

In the same place, in Dachau, people were skinned (but not from the Germans). The Nazis used human skin to trim saddles and decorate parts of German clothing. In fact, humans were used like animals.

For military purposes, Dachau studied the body's ability to survive at sea. For this, dozens of subjects were regularly placed in special chambers, where a person's ability to adapt to salt water was studied. 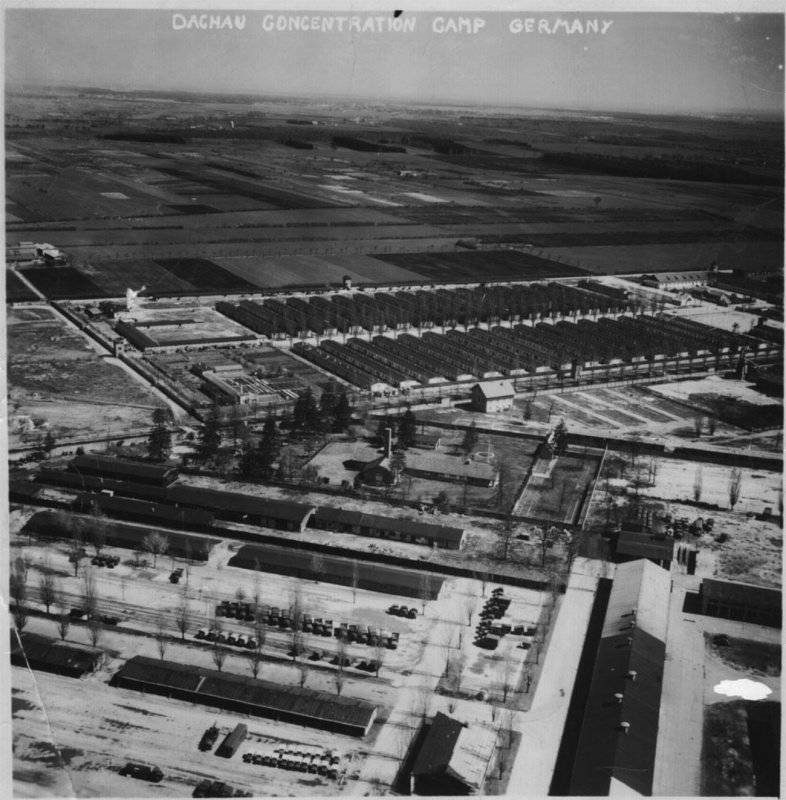 Dachau concentration camp. Source: waralbum.ru
At the time of liberation, there were about 30 thousand prisoners from different countries in Dachau. All of them were released, returned to their homeland, paid monetary compensation. But it is unlikely that this could compensate for the damage to health. 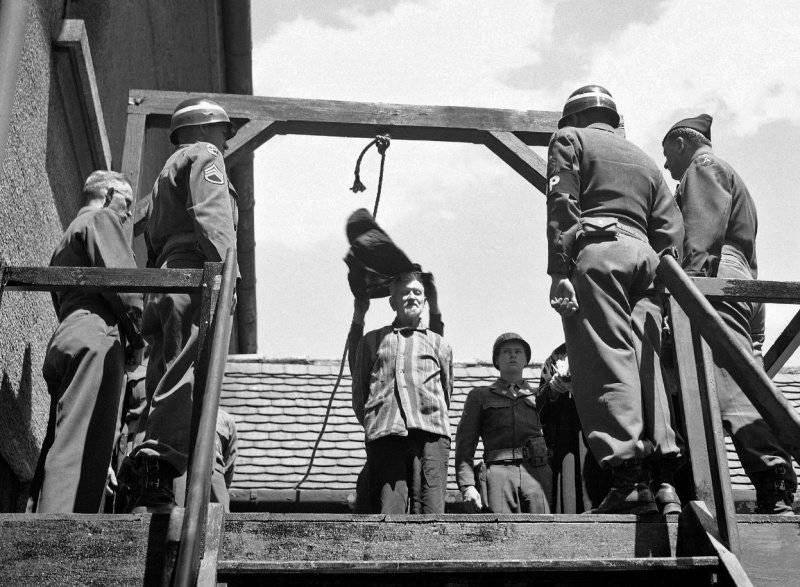