"Barbarossa" in the Baltic 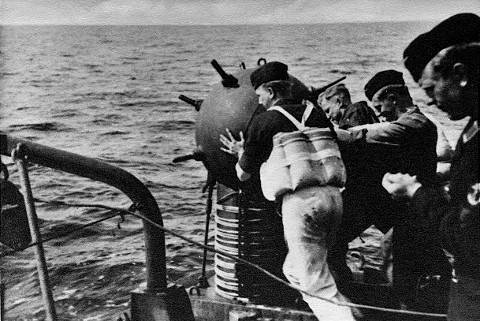 The stern of the German ship. Now the sailors will push the mine into the water.

Four days before the start of the war, when the plan "Barbarossa" had to come into life, kriegsmarine took almost the first military action. On this day, the laying of minefields began.

The task was entrusted to the chief of the Northern group of destroyers (Chef der Minenschiffgruppe Nord) to the captain of the second rank Hans-Kaspar von Schönermark. For three nights, starting from the night of June 18-19, auxiliary mine blocks "Preussen", "Skagerrak", Versailles и "Grill", as well as six large minesweepers of the type M-35 from the base in Pillau, placed 1500 sea mines and 1800 mine defenders. This is how the minefields appeared, which were conventionally called "Wartburg I", "Wartburg II" и "Wartburg III"... They extended from the southern coast of about. Oland to the Soviet-German border. Mines were also displayed around the ports and roadsteads of Memel, Pillau and Kohlberg.

These were typical defensive barriers, which did not justify the hopes placed on them and turned out to be a completely meaningless event, since at the initial stage of the war, Soviet submarines did not appear in those waters. Moreover - on the mines of obstacles "Wartburg" several German ships and vessels were blown up.

The laying of minefields in the Baltic Sea in itself is already a clearly unfriendly step towards the USSR, since Germany was not in a state of war with any Baltic state, and relations with Finland and Sweden were developing very well. German the fleet in the bases of the southern Baltic, nothing threatened, and the laying of mines in the central part of the Baltic Sea could only be justified by the desire to secure them in the event of a war with the Soviet Union.

But simultaneously with the setting of barriers "Wartburg" it was decided to carry out a similar, but already offensive operation. It was supposed to paralyze the actions of the Soviet fleet on the first day of the war, block it in the Gulf of Finland and prevent its deployment in the Baltic. The operation was scheduled for the evening before the war, that is, for June 21.

The laying of mines began at sunset. And although during this occupation the German ships approached the northern tip of the island by three and a half miles and even made eye contact with the Soviet ships, they did not reveal the true reason for the presence of foreign ships in the vicinity of the Soviet shores. At 2:31 a.m., however, two Soviet planes arrived and fired at uninvited guests, but it looked more like an accidental incident than an autopsy of a secret operation carried out by the group. "North".

It looks like the situation with the group "Cobra".

It also included requisitioned passenger ships. "Cobra", "Kaiser" и "Konigin Louise"requisitioned from the company Hamburg - America Line... They were left with the silhouettes of civilian ships, and only the muzzles of guns sticking out on the bow and stern decks betrayed their military purpose.

The group was accompanied by six sea hunters and five small minesweepers. Even before the exit of the mines into the sea, patrol ships spotted a Soviet battleship heading east at the entrance to the roadstead. But, since there were still several hours left before the start of the war, neither the Germans nor the Finns took any action. The group went out to sea late, when it was already getting dark. On the way to the mine-laying site, the Germans spotted various ships and vessels several times, but no incidents followed. Apparently, on Soviet ships, the sight of German minesigns did not alert anyone. But this is understandable - the Germans used former passenger liners to supply mines.

"Cobra", "Kaiser" и "Konigin Louise" placed two minefields, named "Corbeta I" и "Corbeta II"blocking the Gulf of Finland at its narrowest point, between the Finnish island of Yussaari and the Paldiski naval base west of Tallinn. The ships of this group also stumbled upon Soviet ships patrolling the Gulf of Finland, and approached the coast so much that coastal patrols lit them with searchlights and tried to communicate with them by radio. However, all this did not prevent the Germans from laying minefields, although under the circumstances, everything did not go according to plan everywhere. After completing the task, the ships of the group "Cobra" together with the escort ships returned to the base by the morning of June 22. 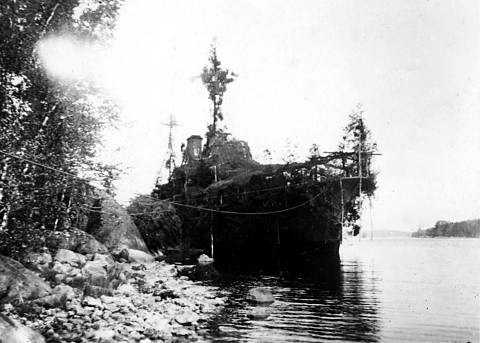 Minelayer "Brummer" in military camouflage, disguised at a naval base near Turku.

In addition to these two main operations, the Germans carried out on the same night a number of minor mine operations in order to block the passages to the naval bases of Liepaja and Ventspils and the fairways in the Irbene and Moonzun straits.

These operations were carried out by flotillas of sea hunters, small minesweepers and submarines. One of them was carried out in the area north of the Ristna peninsula, in front of the fence Apolda, from the open sea. A barrier was installed opposite the northern entrance to the Moonsund Strait, separating the islands of Hiiumaa and Vormsi and leading to the Gulf of Riga. "Gotha".

Moreover, the 2nd flotilla of torpedo boats entered the mines just placed by the group "North"... And two boats, under which mines exploded, took off into the air together with their crews. Thus, the Hitlerite fleet suffered the first losses in the war, which was to begin only a few hours later.

At the entrance to the Soela Strait, separating the islands of Hiiumaa and Saaremaa and leading to the Gulf of Riga from the northwest, a wedge was placed minefields Coburg... Further south, in several rows, barrage mines were placed Eisenach... Thus, the Germans tried to block all entrances to the Gulf of Riga in order to seal it up and block the Soviet ships in its internal waters.

German submarines have set up a proximity mine barrage called Erfurt on the approaches to Ventspils and Liepaja. At the same time, German aircraft dropped several magnetic mines on the fairways of Tallinn, Kunda and Kronstadt and in the Soela and Mukhu straits.

In total, in the last hours before the start of the war, the German naval forces placed more than 2400 mines in the waters of the Gulf of Finland and around the Moonsund Islands.

In addition to the secret setting of minefields, German ships were used for sabotage purposes.

One of these acts of sabotage took place on the night of June 20, 1941. Torpedo boats from the 3rd flotilla of Lieutenant Commander Friedrich Kemnade entered one of the small bays off the coast of Latvia. With the help of inflatable boats, they landed 30 people with the task of blowing up strategically important railway tracks on the morning of 22 June.

At the same time, the boats stumbled upon fishing boats, which meant the disclosure of the stay of German ships in Soviet waters. The Germans, without thinking twice, took the fishermen "prisoner" and sank their boats.

Thus, Latvian fishermen became the first victims of the war that had not yet begun.

Ctrl Enter
Noticed oshЫbku Highlight text and press. Ctrl + Enter
We are
The unexpected war of Nazi Germany with the USSR. Part of 12. NavyWhat you didn't want to know about England
Military Reviewin Yandex News
Military Reviewin Google News
20 comments
Information
Dear reader, to leave comments on the publication, you must sign in.