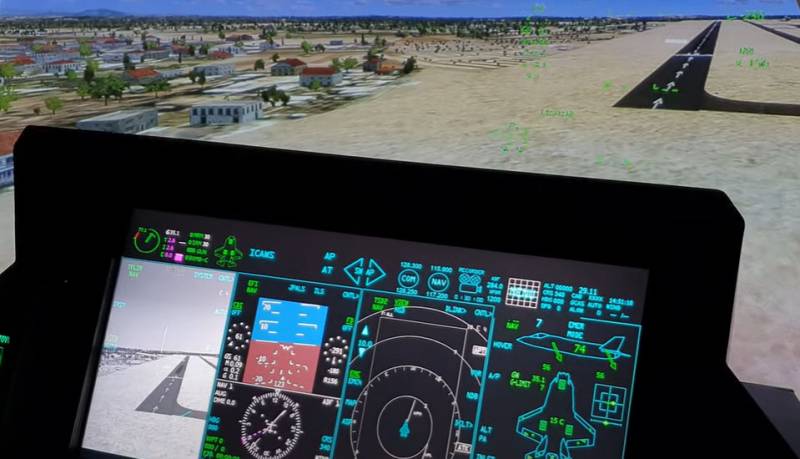 Photo of the F-35A simulator

For the first time, the US military at the Nellis Air Force Test Base in Nevada received live visual data from a commercial tablet aboard an F-35A fighter jet. What kind of tablet are you talking about?

As it turns out, the US Air Force is implementing another program "to develop the capabilities of stealth fighters." One part of this program is the FoX experiment on so-called fighter optimization. Its essence is for the aircraft to carry out data exchange "with the ground" using mobile applications installed on a commercial gadget. It is proposed to extend this concept to the exchange of data between fighters and unmanned aerial vehicles.

During the experiment, all information from the F-35A sensors was concentrated on the tablet on board. There were several applications running on the tablet, which, it was stated, were set up to assist the pilot in combat conditions. For example, one of the applications "helped the pilot to overcome the enemy's air defense system." Also on board was a digital application for activating artificial intelligence, which was selecting the best options for conducting a simulated combat operation against enemy ground air defense systems.

The American press reported that F-35A pilots had previously flown with a digital tablet on their lap, but these gadgets were not fully integrated with numerous sensors for real-time information. It is also noted that so far, experiments with applications on the tablet, which facilitate the work of the pilot in combat conditions, have been carried out on the ground. Now the system will begin to be tested in the air, and at once at three airbases in the United States: Nellis, Edwards and China Lake.

It is known that one of the digital applications used on the F-35A is called the Battlefield Management Portal. It transmits to the pilot data on threats of the "surface-to-air" format, ensuring "optimal performance of a combat mission in the face of opposition from air defense systems." It is this application on the tablet that pilots of the US Air Force are invited to use so as not to get hit by enemy air defenses.

In the United States itself, meanwhile, they wondered why, in this case, a multimedia helmet worth almost half a million dollars is needed, if the pilot has to look at the screen of the tablet in his lap? The fact is that US Air Force pilots keep complaining about these newest helmets. There are delays in the display of information on the multimedia glass-screen of the helmet, the "central axis" is shifted during intensive turns of the pilot's head, it is difficult to enter commands during overloads. The tablet does not have such problems, but the question of why then an ultra-expensive helmet for an F-35 fighter pilot does not exactly remove the question.

Critics of the FoX program note that the tablet needs to be fixed in the cockpit, because in the event of a real combat operation, it may simply fall, as a result of which the pilot will lose the ability to use digital applications. But the problem is that the F-35's cockpit already lacks screens and controls. That is why pilots place the gadget on their lap.

The US Air Force said it intends to expand the "app store" for air combat.
Ctrl Enter
Noticed oshЫbku Highlight text and press. Ctrl + Enter
We are
Almaz-Antey published the results of field experiments that determine the cause and those responsible for the crash of MH-17. The West has tensed ...The Human Rights Council under the President of the Russian Federation recognized the responsibility of the USSR for the genocide and World War II
Military Reviewin Yandex News
Military Reviewin Google News
39 comments
Information
Dear reader, to leave comments on the publication, you must sign in.