Ukraine and Turkey go to war with Russia 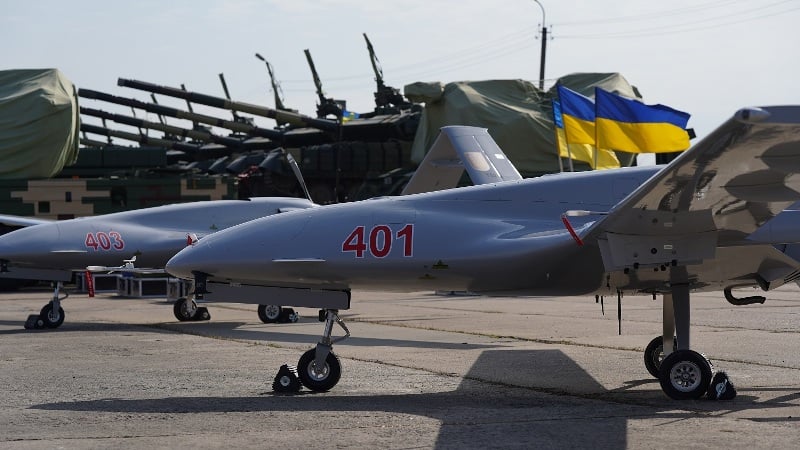 What should Moscow do in the conditions of whipping up an atmosphere of anticipation of a big war in the South of the Russian land?

What Stalin did before the Great War! Arming the army, strengthening industry, creating R&D, science, education and personnel. Force the army of officials to march in formation, and after them all the oligarchs, with the nationalization of all property, if necessary.

Threat of war with Ukraine, Turkey

News, who come almost every day, say that Kiev, Ankara, Washington and Brussels are clearly determined to start a war with Russia. Or force the Kremlin to throw away the white flag, surrender Donbass, Crimea and everything that is required (Kaliningrad, Vyborg, Kuriles, etc.). At the same time, Kiev does not have independence, it plays the role of a penal battalion, a "battering ram" to strike at Russia. For the Russians to kill the Russians to the delight of the masters of the West. Ukraine is quietly sacrificed in order to then colonize the western regions of the Russian world. Thus, the new and inevitable collapse of Ukraine will allow its western regions to be given to Poland, Hungary and Romania. To join the "world community".

Why does Ankara need it?

Earlier, Turkey received great benefits from "friendship" in the Russian Federation: billions of dollars annually from the tourist flow, the construction of the Turkish Stream, the Akkuyu nuclear power plant. However, economics is a lower priority compared to geoeconomics and geopolitics. Ankara is consistently seizing one position after another in the creation of a logistics power on the way from Asia to Europe. From Asia - flows of energy resources, from Europe - goods and technologies. Therefore, Ankara became a participant in the war in Iraq, Syria, Libya and Karabakh. Moreover, Turkey's successes in these wars are obvious. Ukraine is next in line.

Erdogan also plans to expand the capabilities of the strait zone. Turkey will build the Istanbul Canal. The head of Turkey said that the Montreux Convention will not apply to the Istanbul channel. That is, in 6-7 years, foreign squadrons and fleets will visit the Black Sea without restrictions, which will be a powerful blow to Russia's strategic interests in the south. 104 retired Turkish admirals protested. The former military men were frightened by the ease with which the president changes the laws of the country and, in fact, follows the path of liquidating the secular state and the precepts of the founder of the republic, Mustafa Kemal. In response, the authorities accused the admirals of attempting a coup and arrested some of the "conspirators." The day before the admirals' letter, 126 retired diplomats made a similar appeal, stating that revising the convention was inadmissible.

The storm is steadily approaching Russia. The news comes about the appearance of Polish and Turkish military in Donbass. The Turkish military is similar to special forces, apparently aimed at coordinating the actions of militants from the Middle East. Ukrainian special services with the help of Turkish colleagues are recruiting mercenaries in Syria. Earlier, the Turks have already successfully used militants in Syria in the war in Libya and Karabakh.

The Russian Defense Ministry reports that NATO is increasing its presence in the Black and Baltic Seas. NATO is creating a second echelon behind Ukraine. It is clear that the Westerners are not going to fight. This is "moral" support for Ukraine, a detachment. The task with the help of military alert and local hostilities is to cause a powerful internal crisis in Ukraine, Belarus and the Russian Federation. A war, even a limited one, will cause a new wave of growth in prices for foodstuffs, consumer goods, clothing, electronics, gasoline, etc. Further, a split in the Russian elite, a rebellion of its pro-Western part, is possible. An attempt to revolt the regions.

Russia interrupts flights with Turkey. Millions of people who were planning to go on vacation abroad are unhappy. At the same time, a new surge in prices in the southern resorts of Russia. The Russian administration is talking about a possible disconnection from SWIFT and from the US payment systems Visa and MasterCard. Biden talks about the state of emergency in the field of national security because of Russia, introduces new sanctions against the Russian Federation. Moscow responds with its sanctions.

The case is clearly heading for war.

Otherwise, the crisis of capitalism cannot be overcome. Kiev, under pressure from the West, can at any time launch an invasion of Donbass and arrange provocations on the Crimean borders. Turkey and NATO will support Kiev with information, weapons, ammunition, advisers. NATO will create groupings of troops in the Baltics, Poland, and the Balkans, put pressure on Moscow, and prevent it from making a dash to the Dnieper. Further, the scenario is either a protracted crisis, with a sharp deterioration in the life of the common people, which will cause internal social explosions in Russia, Ukraine and Belarus, or a quick surrender of the Kremlin. At the same time, the "color revolutions" in Russia and Belarus will clearly bring pro-Western, openly collaborationist regimes to power.

It is also worth noting that Western Europe is clearly not against this scenario. Formally, Brussels, Berlin and Paris are against the war. In fact, the European capitals want to realize their scenario “Europe from Lisbon to the Urals”. The new "perestroika" of Russia will make it possible to reformat and colonize Ukraine and Belarus, the western part of the Russian Federation, making its inhabitants 3-4 grade EU citizens. Dilute the African and Arab masses in Europe with white "slaves". Divide Russia along the Ural ridge, including the western part in its sphere of influence. Kaliningrad-Konigsberg will be returned to Germany, Vyborg - to Finland, the Finns will be allowed to master Karelia, etc. This will raise the EU's status in relations with the United States and with the new eastern empire - China. Therefore, the Ukrainian war is beneficial to Europe.

It is necessary to use the pre-war experience of the USSR and Germany. Moscow and Berlin were able to prepare for a big war for several years. Rebuild the economy, raise the military-industrial complex, create a first-class Armed Forces, fundamental science, research and development, a system of patriotic education and training, personnel. After all, you need to recreate everything that has been consistently destroyed for 30 years.

War requires a strong economy. It is necessary to use the experience of Germany after 1933, when industrial money was issued. Their turnover is rigidly tied to industrial production, interest for the use of money was not charged. They cannot be cashed, sent for other purposes, since this money is not a means of payment. Money is not tied to any of the world's currencies. The ban on the export of capital. Thus, it is necessary to create a non-cash circulation of money by sectors of the economy, without the possibility of cash out budget funds. Eliminate loan interest in the state money circulation, except for cash and the export of capital of concessions, where interest is a financial tax for the use of money, resources and their turnover. The ruble is tied to the entire national treasure during the nationalization of resources, subsoil and land, ceases to have dollar and other currency content (except for a fixed gold).

This minimal socialism, multiplied by the ideology of Russian nationalism (National question and migration), the version of state-monopoly capitalism will allow in the shortest possible time to restore the defense capability and autocracy, the autarky of the Russian state and people.

It is also necessary to find an ally, a supplier of industrial technologies, equipment and entire factories in order to restore industrial independence. It will not work to come to an agreement with America and Europe. The West has been waging a war of annihilation with Russian civilization for a thousand years. The question is in the worldview, the plan of life, faith and ideology. The formula for Western policy towards Russia sounds like this, it was voiced by Brzezinski:

"A new world order with US hegemony is being created against Russia, at the expense of Russia and on the rubble of Russia."
Only China remains, which needs a solid rear in its confrontation with the United States. The Celestial Empire can reach the level of "great harmony" only with the spiritual influence of Russian civilization.

The union of Russia and China allows humanity to get out of the current impasse caused by the victory of capitalism and the consumer society.

Ctrl Enter
Noticed oshЫbku Highlight text and press. Ctrl + Enter
We are
About Stalin and KhrushchevWhat you didn't want to know about England
Military Reviewin Yandex News
Military Reviewin Google News
186 comments
Information
Dear reader, to leave comments on the publication, you must sign in.