August 28 2012
1
The Russian Empire, unlike the modern Russia, was able to attract foreign specialists. Talented foreign officers made a huge contribution to the development of the Russian army in general, and the most important victory over Napoleon in particular. One of such commanders was Karl Fedorovich Baggovut (Karl Gustav von Baggenhufwoodt).

He was born in 1761, in the town of Pergel, in the province of Estland. The family, with a difficultly pronounced family name Baggenhufwoodt, has Norwegian roots, but moved to Sweden in the 16th century, then to Estonia in the 17th century. Karl Gustav’s father headed the Libau customs, and it was he who determined his son’s future career, in 1778, having bought him a captain's patent for the army of Margrave Anspach-Bayreutsky. But for a long time in the army of the Bavarian margrave 17, the summer Baggovut did not linger and a year later he joined the Tobolsk infantry regiment as a lieutenant.

The first combat experience Karl Fedorovich received later 2, after entering the Russian service. In 1781, the Crimean Tatars rebelled. While serving in the Donetsk regiment, Baggovut during the year participated in the pacification of the Tatars. 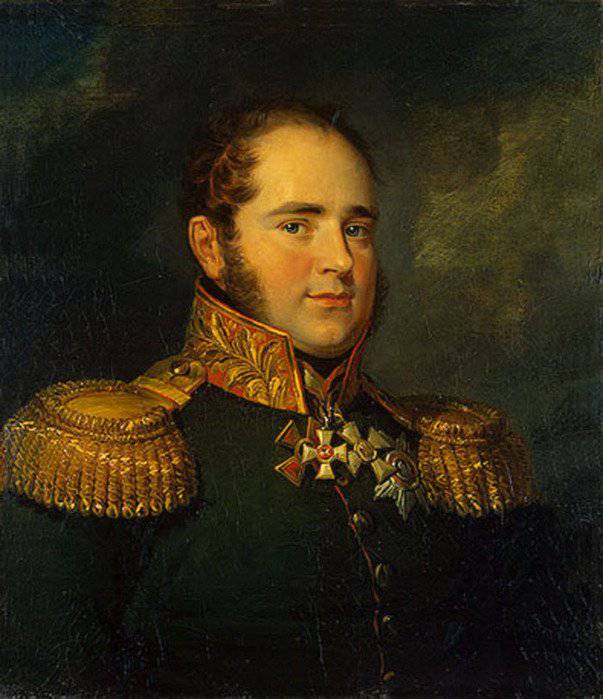 In 1787, with the rank of Captain Karl Fedorovich, they were transferred to the Siberian Grenadier Regiment, which went south to fight the Turks. In the 1789 year, in the battle of Malaya Salcha, the troops of Prince Repnin, which included Baggovut's regiment, routed the Turks, seizing 8 banners and 3 guns. This battle was one of the first major battles of Karl Fedorovich, in which he showed himself to be a skillful commander. Later, under the command of Prince Potemkin, he took part in the conquest of Bender.

By the end of the Russian-Turkish war, the health of Karl Fyodorovich deteriorated sharply, and he was forced to resign as the prime minister. But less than a year later, at 1792, he volunteered for the army of Count Kakhovsky, who was in troubled Poland. At the end of 1792 (or the beginning of 1793 on the Gregorian calendar) was again officially recruited as a major in the Siberian Grenadier Regiment.

In 1794, in Warsaw, on Easter night, a treacherous attack on the Russian garrison happened. The order 2000 of Russian soldiers taken aback was killed. But Karl Baggovut managed to gather around him a handful of brave men and with fights to get out of the rebellious city. Less than two weeks after the Warsaw events, 21 April 1794, Baggovut once again distinguished himself, having managed to turn the 6 squadrons of cavalry and two companies of rangers of the rebel Poles to 2 to flee. In June of the same year, Karl Fedorovich, having two infantry companies, a cavalry squadron and hundreds of Cossacks, dispersed the infantry battalion 400, cavalry squadrons and the XNUMX order of cosiners (militia). Baggovut also participated in the Battle of Matzeevitsky Castle, where the leader of the uprising, Kosciusko, was captured, and then distinguished himself during the storming of the outskirts of Warsaw and the further pursuit of the rioters.

At sunset of the Catherine era in 1795 Baggovut was appointed commander of the 1 battalion of the Belarusian Chasseur Regiment, then, in 1797, he became the commander and, a year later, became the chief of the 14 th Chasseur regiment. At 1799, Karl Fedorovich was promoted to major general, but at 1800, at the whim of Paul I, was dismissed from service.

In the fall of 1801 of the year, with the accession of Alexander I, Baggovut returns to the service and gets the position of chief of the 4 th Huntsman Regiment, which will be held until his death. In 1804, Karl Fedorovich receives the coveted order for a Russian officer of St.. George 4 degree, for 25 years of impeccable service as an officer. Already next year, Karl Fedorovich once again proved his value to the Russian army in the campaigns against the French 1805-1807 of the year.

So, in 1806, in the battle of Pultusk, an unexpected counterattack, Baggovutu managed to rout the advancing French, who, according to one version, was commanded by Napoleon himself. Then the cavalry general Bennigsen commanded the Russian troops. For this battle, Karl Fedorovich was awarded the Order of St.. George 3 degree, and from the Prussian king granted the Order of the Red Eagle.

In the 1807 campaign on Baggovuta, the task was to cover the retreat of the Allied army from Yankov to Preussish-Eylau. In January, in the rear-guard battle in the city of Preussis-Eylau, he received a heavy concussion with a nucleus, but he managed to detain the enemy. For this fight he was awarded the Order of St.. Anna 1 degree. Despite the injury of Karl Fedorovich, in the summer of 1807, he took part in the battle of Galesburg, and then in the battle of Friedland. Raevsky. It is worth noting that Prince Bagration valued Baggovut and often relied on the military art of the latter.

After the completion of the coalition warrior Baggovut was promoted to lieutenant general. But he did not have to rest on his laurels for a long time, in 1808, the war began with Sweden. Here Baggovut successfully commanded a number of operations and particularly distinguished himself in the battle of Abo, where the Swedish landing force was defeated.

In 1812, Baggovut commanded the 2 Infantry Corps of the 1 Western Army, Barclay de Tolly. The corps, originally located in Orzhitsy, retreated to Smolensk and took part in the battle for the city itself. On August 17, the 6 Division of Major General Yevgeny of Württemberg was deployed to the aid of units of the Dohturov 4 Infantry Corps. Her timely approach allowed her to correct the situation at that moment unfavorable for the Russians.

Leaving the burning Smolensk dominated by the French, the Baggovut corps with the whole army retreated to Borodino, where the general battle of the campaign took place. The 2 Infantry Corps initially occupied a position on the right flank, but when it became clear that the main events were unfolding on the left, Barclay de Tolly transferred Baggovut's corps to the village of Utica. By the time of the approach of the 2 Infantry, the cavalry of Poniatowski and the Junot corps, due to the enormous advantage in numbers, some success had already been achieved, pushing the Tuchkov-3 1 corps. General Tuchkov himself was seriously wounded in one of the counterattacks on the Utitsky barrow. If the defense of the left flank had been broken, then Napoleon would have had great prospects for entering the rear of the Russian army.

It is likely that a convenient position to retreat would allow part of the army to escape, but the losses would be incomparably higher. However, Baggovut, who took command after the injuries of Bagration and Tuchkov, managed to gain a foothold on the left flank and he withdrew his troops only after it became clear that Bagration flushes had been taken by the French and that they didn’t keep Utitsu and Utitsky kurgan. For the battle of Borodino, Karl Fedorovich received the Order of St.. Alexander Nevsky. But they did not have time to hand the award signs and the emperor's rescript.

October 18, not far from the Russian camp at Tarutino, was found a consolidated detachment of Marshal Murat, who with his presence was supposed to demonstrate the false direction of the retreat of the French from Moscow. The avant-garde commander of the French cavalry, pretty thinned by that time, numbered about 20 thousand fighters and 197 guns. The partisan detachments reported that the nearest reinforcements, which Murat might receive, were in Moscow. To the remoteness of the reinforcements, the unfavorable position of the French was added, to the left flank of which a dense forest adjoined. In the end, it was decided to attack the troops of Murat.

Baggovut's infantry corps was to attack the left flank of the French near the village of Teterinka. By chance, the corps came out of the forest opposite the French battery and the renowned general, who had survived the bloody battle of Borodino, was killed by the core at the very beginning of the battle. This did not allow the Russian infantry to act more decisively. As a result, Murat could not be completely defeated, but the French suffered significant losses, only by prisoners losing the order of 2000 people, in addition to 22 guns and the entire train. The Russians, on the other hand, have lost the order of 300 people killed and wounded.

Both Alexander I and Kutuzov regretted the loss of Baggovut. The commander-in-chief noted that Karl Fedorovich was one of the most talented corps commanders, and the emperor, in a letter to the widow of the commander of the 2 infantry corps, wrote the following: "I lost in him a brave commander useful to the fatherland."

Karl Fedorovich Baggovut was one of many foreigners in the Russian service, thanks to whom they managed to stop Napoleon’s invasion.