The steel grip of "soft power": Turkey in Syria 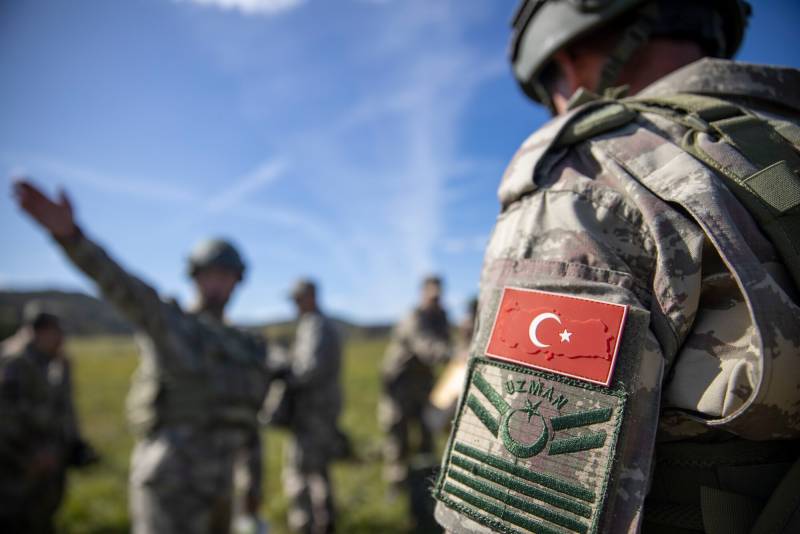 “Soft power is the ability of the state (union, coalition) to achieve the desired results in international affairs through persuasion (attraction), not suppression (imposition, coercion). "Soft power" acts by encouraging others to follow (or by seeking their own consent to follow, or making it beneficial to follow) certain norms of behavior and institutions in the international arena, which leads its carriers to achieve the desired result virtually without coercion. "

The world is changing

The world is changing, and at the same time new players are entering the arena of international politics.

And, perhaps, one of the most unexpected participants in the struggle for new spheres of influence was the Republic of Turkey.

Unfortunately, in Russia, the topic of Ankara's international influence remains completely undisclosed to this day. The few facts about the growing Turkish political power are mainly of interest to only a narrow circle of specialists and do not find any reflection among the masses.

The only exceptions in this case are the few evidences of direct military confrontations between Turkey and the forces acting as allies of Moscow - however, this information is sometimes presented in an extremely distorted form and sometimes is not at all objective.

This cycle will consist of a whole series of articles: in them we will try to reconstruct in a condensed form the picture of Ankara's international influence - an extremely extensive, interesting, and, no doubt, very threatening picture ...

"Active participation in a military bloc is hardly possible directly
correlate with the manifestations of the imperial ambitions of Turkey, but it
emphasizes the centuries-old habit of the Turks to rule rather than
be manageable. Undoubtedly, the pursuit of domination and veneration
"The good old days" has become a feature of the national character,
which is cultivated in the post-war Turkish Republic. So,
demonstrations on the occasion of public holidays by all means
is led by a column of soldiers dressed in janissary uniforms, and
the annually celebrated anniversary of the capture of Constantinople is made
like a costume procession "
- S. Druzhilovskiy, “Turkey: the habit of managing”.

Perhaps it would be quite fair to start this analysis from the country that became the starting point for Turkey's emergence as a new geopolitical player.

Alas, contrary to all the aspirations and hopes of Russia, the “Syrian tangle” turned out to be very difficult to resolve - the interests of too many players intersect in it, for most of whom the current situation looks more than satisfactory. 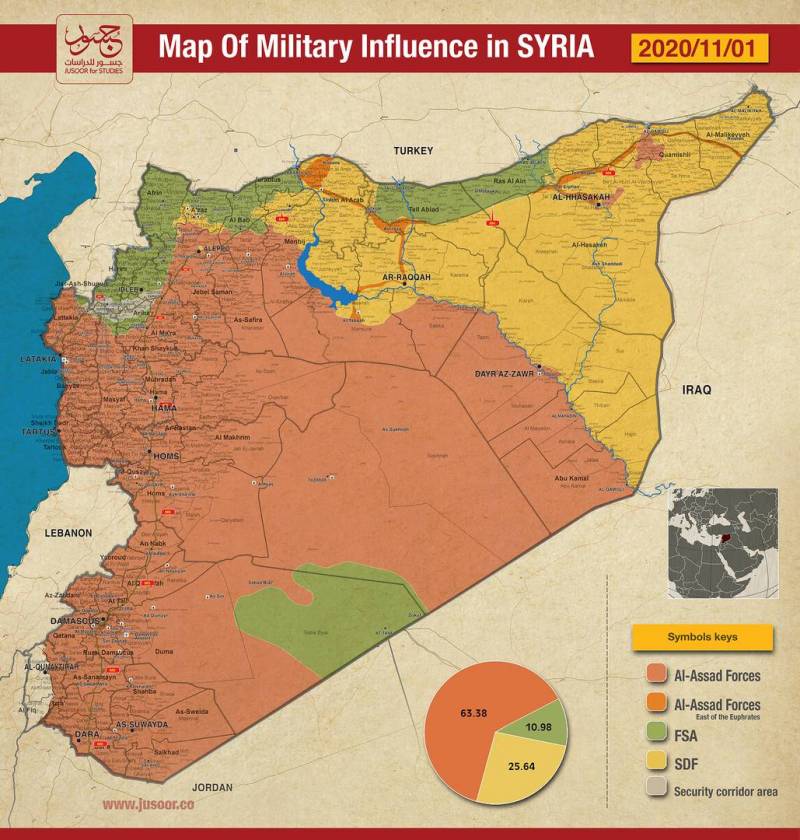 Syria as of 2021. Photo source: rossaprimavera.ru
At the moment, the official government in Damascus controls only 63,38% of the country's pre-war territory.

The remaining percentage comes from the US-backed Kurdish alliance SDF, as well as from Ankara's northern security zone.

However, despite the relatively small size, the territories not controlled by Damascus are vital for Syria: the provinces beyond the Euphrates once provided the country with their own oil, and the northern provinces were called the "bread basket" - it was there that the most fertile lands in the country were located. Thus, the United States and Turkey created conditions in advance in which the complete victory of Russia and the subsequent restoration of the SAR became simply impossible - at the moment Syria is experiencing the most severe fuel and food crises, the main beneficiary of which is Iran. 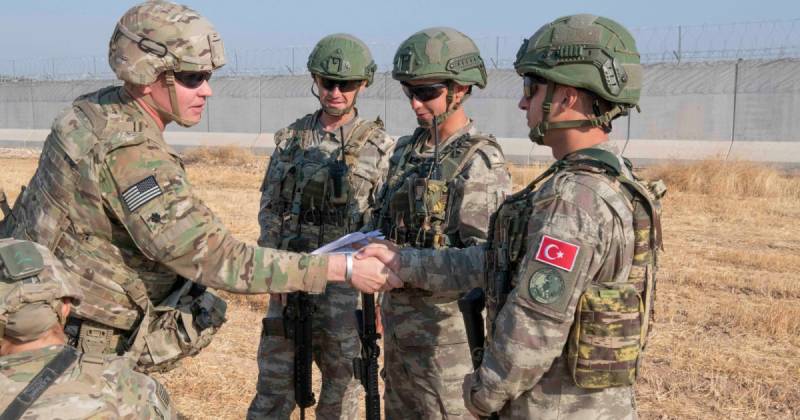 Contrary to popular belief, the United States benefits from a Turkish military presence in the Syrian Arab Republic. Photo source: motherjones.com
Initially, no one expected that Ankara would seriously decide to occupy part of the territory of the Syrian Arab Republic: at the start of Operation Euphrates Shield, most of the Russian experts were confident that Turkey would soon lose its northern provinces - these events, in their opinion, were relegated to the end phases of active hostilities against terrorist groups. This state of affairs continued until the end of 2019 and the beginning of 2020, when the Syrian army was defeated in the course of unsuccessful attempts to return the lost lands.

Unfortunately, such expert conclusions can only be associated with nothing else than complete analytical myopia - Turkey almost immediately began to invest in its territorial acquisitions. Following the troops were builders and entrepreneurs: the former Syrian provinces soon began to compare favorably with those controlled by the official government in the availability of electricity, fuel, shops and roads.

In the north of Syria, an extremely stormy humanitarian activity was launched by Turkish charitable foundations: for example, the IHH fund provides hot meals for schoolchildren, regularly organizes the supply of food parcels, clothes and bedding. A number of organizations (Association Ataa) are actively building residential complexes for refugees: they are small typical townships, the infrastructure of which includes schools, mosques and retail outlets.

Ankara's state structures, however, keep up with non-profit organizations: the Turkish army regularly participates in humanitarian operations designed to help the local population. This includes the deployment of field kitchens and the distribution of hot meals, the organization of medical centers (with subsequent mass vaccination), the restoration of schools and conducting classes in them with the participation of Turkish military personnel, assistance to socially vulnerable categories of people (the elderly, the disabled, families who have lost their fathers). 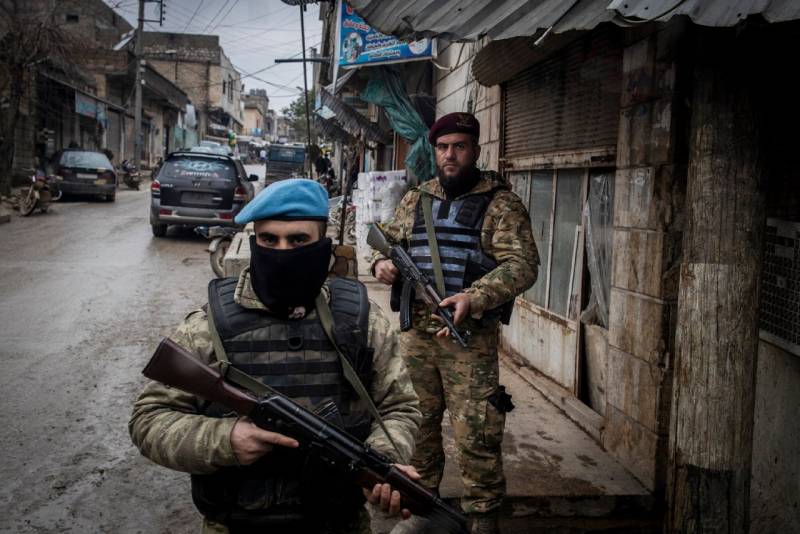 Law enforcement agencies in the former Syrian provinces are made up of Syrians - a move by the Turkish administration that has a beneficial effect on relations with the local population. Photo source: nytimes.com
Separately, it is worth mentioning the work with passionate youth, a very significant number of which ended up in the northern territories now belonging to Turkey: young and physically strong people are recruited into the so-called "armed forces of the Syrian opposition", where they undergo full-fledged training under the guidance of Turkish military instructors. It is from them that the police units are formed, which ensure order in the former Syrian provinces controlled by Ankara.

However, the creation of security forces is by no means the only measure designed to reduce tensions and help millions of refugees. Turkey is actively funding Vocational Training and Education Centers, where Syrians can get one or another working profession. Turkish language courses are being held - thanks to them, young Syrians have the opportunity to go to study and work in the Republic itself. Teachers and clerics are perhaps the best conductors of Ankara's "soft power" in the region.

In addition to the military police, Turkey has created and trained a full-fledged bureaucratic apparatus - controlled local Syrian councils for administrative affairs.

Separately, it is worth mentioning that the northern territories are mostly connected to the electricity grid of the Republic of Turkey itself - this put an end to long-term and regular power outages; among other things, mobile communications in the region are provided by Turkish operators, and the lira serves as the means of payment. In addition, Ankara has registered over 500 Syrian companies to facilitate cross-border trade.

Against the background of what is happening, the Syrian refugees literally idolize Turkish soldiers and Erdogan himself: Ankara's active intervention saved many of them from certain death (the security forces controlled by Damascus and Tehran are organizing harsh purges of not only terrorist elements, but also all those dissatisfied with the policy of the official authorities - this is precisely the fact led to a second mass exodus of refugees in Syria, who also went to the northern territories). And subsequent energetic measures to restore the economy and law and order in the region led to the fact that the standard of living in the pro-Turkish north became noticeably higher than in the territories controlled by Damascus.

The Turkish authorities, however, used their military and political successes extremely wisely: constant work with the broad masses, coupled with an extremely soft and noble approach (both in the speeches of high-ranking politicians and in “work on the ground”, the Turks call the Syrians brothers, actively focusing on for general well-being and prosperity) have made the northern lands a showcase of prosperity that Damascus cannot provide. Already at this stage, this causes significant discontent among ordinary Syrians - sympathy for the opposition and its Turkish patrons is only growing, getting an outlet in the form of popular demonstrations (for example, in Daraa on March 18, 2021, where a rally in honor of the revolution took place). 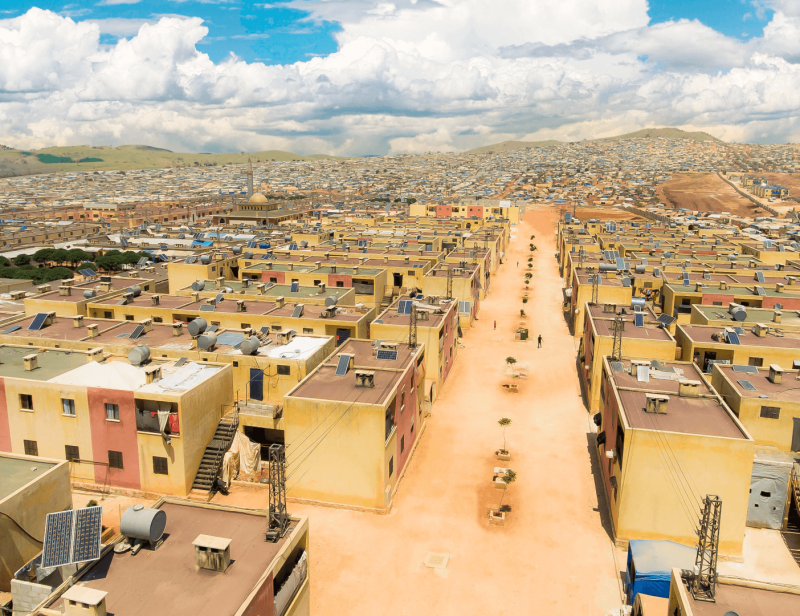 "Ataa Residential Complex" is one of the many refugee townships, equipped with everything necessary for a comfortable stay. For example, three of these are built around only one Jerabulus. Photo source: ataarelief.org
If the current political and economic situation persists, a new collapse of official Damascus will only be a matter of time: repression, lack of fuel and food, lack of medical assistance and international humanitarian support, unstable electricity supply, active intervention of Iran and active outflow of young people will finish off Bashar al-Assad's regime even without an outside party. interference.

As of 2021, about 11 million people in Syria are in need of humanitarian assistance, and an estimated 9 million are in food shortage. More than half of the country's population is unemployed.
Turkey, represented by almost four million Syrians, received not only vassals, but also ardently devoted and loyal supporters - and here it remains only to state the fact that Ankara's “soft power”, undoubtedly, turned out to be the most effective weapons Syrian Civil War.

The complex of measures, both military and non-military, applied by the Republic of Turkey, helped to win Ankara world recognition and respect even against the background of the very controversial expansionist policies of Recep Tayyip Erdogan.

"Turkey was widely criticized when it brought troops into Syria, but today it is its soldiers who stand between the millions of Syrians and the potential massacre at the hands of Bashar al-Assad's troops,"
- The New York Times.

Of course, against the background of what is happening, in no case should the importance of the Turkish armed forces be belittled, but the key role in the development of northern Syria as a Turkish territory belongs to analysts, economists, officials, psychologists, doctors and teachers. In the shortest possible time, millions of Syrians became loyal subjects of the Turkish Republic, ready not only to defend the new government in their native land, but also to help advance its interests in other countries.

This is “soft power” - and this is what a real, effective foreign policy of the state looks like.

Ctrl Enter
Noticed oshЫbku Highlight text and press. Ctrl + Enter
We are
About Stalin and KhrushchevWhat you didn't want to know about England
Military Reviewin Yandex News
Military Reviewin Google News
121 comment
Information
Dear reader, to leave comments on the publication, you must sign in.