Theme "B-90". Projects of promising bombers from the Sukhoi Design Bureau

The appearance of the T-60 aircraft is the version of the Air International magazine. There is a clear similarity with the T-4MS

In the late seventies, work began in our country on the promising project "Bomber-90" or "B-90". According to its results, in the nineties, a promising aircraft capable of replacing existing samples should have entered service with the Air Force. During the work on this topic, the OKB im. Sukhoi developed a number of projects, but none of them was even brought to the test.

At the end of the seventies, the Sukhoi Design Bureau was working on a project for the Su-24BM aircraft. It provided for a deep modernization of the existing front-line bomber with a radical restructuring and a sharp increase in tactical and technical characteristics. In particular, it was planned to transfer the car to the category of medium-range bombers. In parallel, in specialized scientific organizations, a reserve was created for further work on a promising machine with the code "B-90".

At that time in the ministry aviation industry and design bureaus were heated debates about the ways of further development of the bomber direction. Some responsible persons suggested continuing the process of improving the Su-24 and expanding its tasks by increasing the characteristics, while others insisted on developing a completely new project. The main supporter of the abandonment of the "old" aircraft was the chief designer of the Sukhoi Design Bureau (later general) and the deputy minister of the aviation industry M.P. Simonov.

At the turn of the decade, M.P. Simonov proposed a new approach to the creation of aviation technology. Taking into account the experience of work on the T-10 fighter, it was proposed to transfer the preliminary development of new machines to TsAGI. In the future, the Institute's developments were to go to design bureaus for further design. 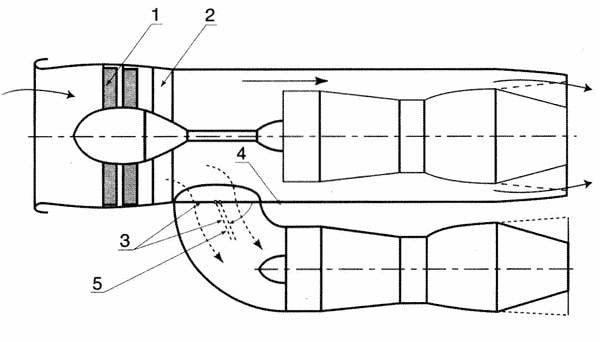 Diagram of a two-pipe engine. 1 - fan blades; 2 - fan stands; 3 - throttle valves of the second circuit; 4 - maximum bypass; 5 - minimum bypass. Graphics Testpilot.ru
The first project implemented according to this principle was to be "Bomber-90". In 1979-80. TsAGI carried out the necessary research, and in 1981 the Sukhoi Design Bureau received working materials for further development. The project was accepted for development and received the internal designation T-60. The new project has diverted some resources from the existing Su-24BM, and its development has slowed down.

Unfortunately, not too much is known about the T-60 project. The bulk of the data on it, including the final look, has not yet been published. At the same time, the general features and main disadvantages of the proposed design are known. For example, a very harsh criticism of the project is found in the memoirs of O.S. Samoilovich - Deputy M.P. Simonov. He called the key innovations of the project absurd.

The T-60 bomber has been in development since 1981; N.S. was appointed chief designer. Chernyakov, moderator - V.F. Marov. In the course of working out the general appearance of the aircraft, TsAGI specialists started from the existing T-4MS project. The airframe and some other units were almost completely borrowed from this aircraft. At the same time, fundamentally new solutions were proposed.

The T-60 aircraft was supposed to retain the variable sweep wing. At the same time, in certain modes, the rotary consoles had to go under the load-bearing fuselage, improving aerodynamics. The power plant was proposed to be formed from the so-called turbojet engines. two-pipe scheme, worked out in the OKB P.A. Kolesov. Such an engine already existed and was tested on the bench. Two motors were supposed to provide a total thrust of 57 tons. 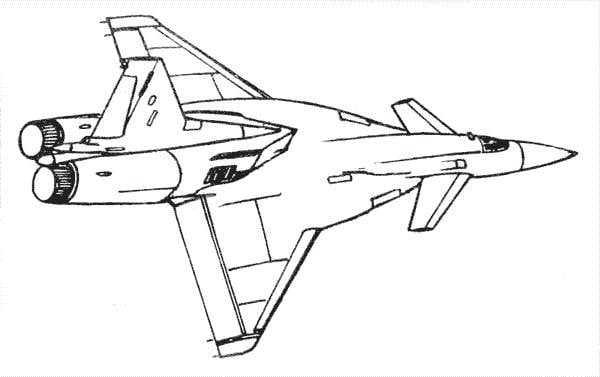 Modern reconstruction of the appearance of the T-60S. Militaryrussia.ru graphics
It soon became clear that the removal of the consoles under the fuselage, at least, was difficult due to the deformation of the structures in flight. Unusual twin-tube engines required the tail section of the aircraft to be redesigned with a loss of performance. In addition, gross errors were identified in the scientific data on model purges.

With the letter "C"

In 1982-83. a new stage of tests in a wind tunnel took place, which showed the correctness of the opponents of the project. In its original form, the T-60 had a lot of shortcomings that deprived it of prospects. However, under pressure from supporters of the project, the Minaviaprom did not stop work. As a result, a new version of the bomber appeared, designated the T-60S. O.S. was appointed chief designer. Samoilovich.

In the project with the letter "C", the problematic solutions of the previous development were abandoned. Now it was proposed to build a long-range single-mode supersonic bomber capable of carrying cruise missiles. How the T-60S saw its creators is unknown; there are only some information and estimates.

According to some reports, it was proposed to build an aircraft of the "duck" scheme with a forward horizontal tail. A twin nacelle with a turbojet engine R-79 or more advanced products was placed at the base of the keel, on the upper surface of the aircraft. A bomber up to 40 m long could have a maximum take-off weight of approx. 85 tons and carry up to 20 tons of payload. According to calculations, the theoretical maximum flight range (probably with refueling in the air) reached 11 thousand km. 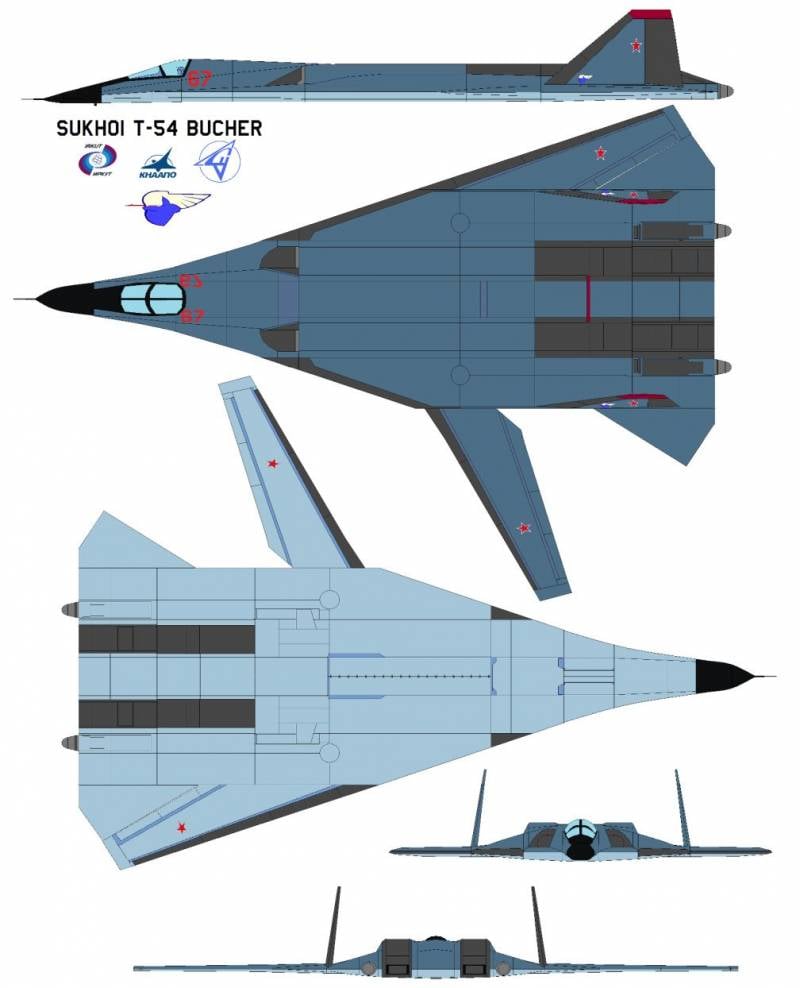 Alleged projections of the aircraft "54". Graphics Alternathistory.com
For the T-60S, it was proposed to develop a fundamentally new sighting and navigation system. A variety of electronic warfare and reconnaissance means could also be used. The armament was supposed to consist of 4-6 cruise missiles placed on a drum installation inside the fuselage or on an external sling.

In parallel with the development of the T-60S, the development of the Su-24BM continued. Despite a certain difference in the calculated characteristics, the two projects actually competed with each other. Nevertheless, the Su-24BM was losing in such a struggle, and for its victory new solutions were required. So, from a certain time in this project, a fixed wing and equipment from the T-60S were used, which gave an increase in characteristics. However, this did not help, and by the mid-eighties, work on the radical modernization of the Su-24 stopped.

In the mid-eighties, personnel reshuffles took place at the Sukhoi Design Bureau, and these processes influenced the work on the B-90 theme. A new team of designers began to rework the existing T-60S project. The updated long-range bomber received the designation "54", although in some sources such a project was still called the T-60S. In the future, such a machine could replace the existing Tu-22M3 long-range bombers.

According to known data, Project 54 continued the ideology of its predecessor. It was a supersonic missile-carrying bomber with reduced visibility, designed to strike targets at long range. In the late eighties, a new PrNK B004 "Predator" was developed for such an aircraft. Subsequently, the devices of this complex were used in new projects.

An attempt to reconstruct the appearance of "54S". Graphics Paralay.com
It is known that since the mid-eighties, some work has been carried out at the Novosibirsk aircraft plant to prepare the future production of experimental and serial equipment. However, this period was no longer conducive to the successful completion of new complex projects - the real future of the project was in doubt. Work on "54" continued until 1992 and was stopped by a presidential decree. It was a gesture of goodwill, demonstrating the peaceful intentions of the new Russia.

However, already in 1993-94. development of the 54C bomber began. He was supposed to keep some of the features of the base "54", but use new engines and on-board equipment. Perhaps the issue of stealth was being worked out more thoroughly. The exact appearance of this car has not yet been revealed, and the known drawings are of unofficial origin and may not correspond to reality.

The design of the 54S bomber stopped at the end of the nineties. The Russian Air Force adopted a new plan for the development of long-range aviation, in which there was no room for the purchase of new equipment. The existing Tu-22M3 was proposed to be repaired and modernized, and the development of a replacement for them was canceled.

Thus, the B-90 theme and a number of projects that had been developed over a long period of time did not give the desired results. The first version of the bomber had a number of fatal flaws, the second did not progress beyond prototyping for organizational reasons, and the last two projects were developed at a not very good time. 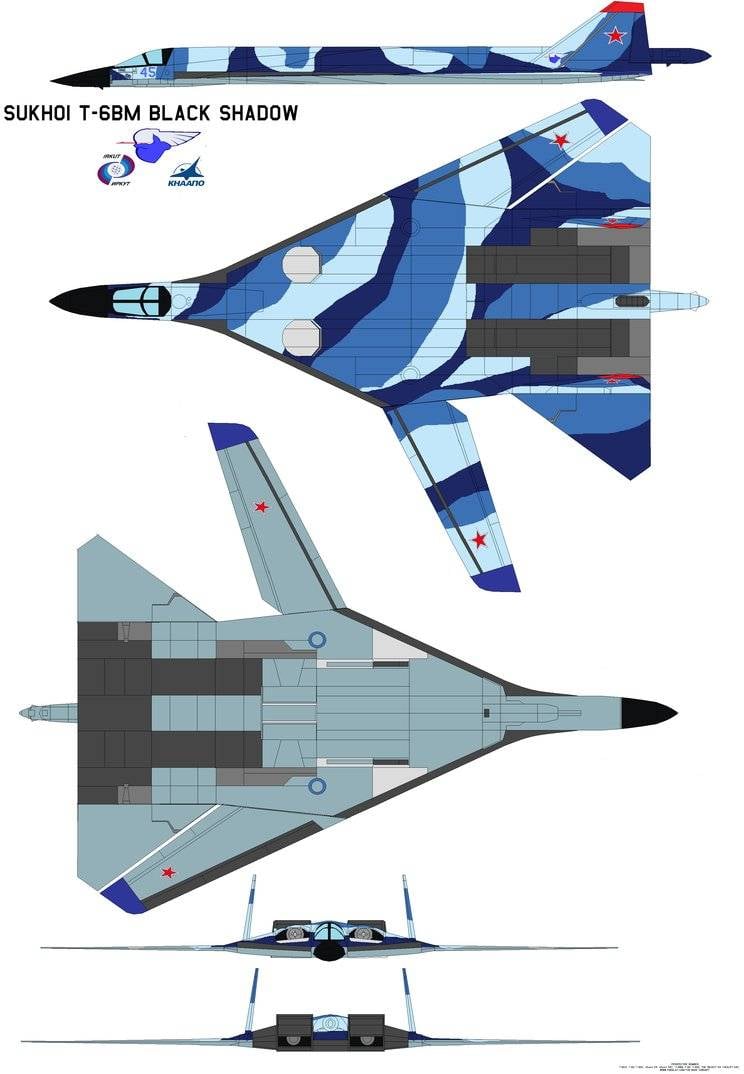 Another "fantasy on the theme". Graphics Alternathistory.com
As a result, the Bomber-90 program did not allow the Air Force to be re-equipped within the planned timeframe. Moreover, it did not give direct results at all. In the nineties and in the following decades, our army had to use only existing bombers of various models. The replacement for them appeared with a great delay.

The failure of the B-90 theme can be attributed to several main factors. First of all, this is a lack of agreement among responsible persons: disputes hindered the development of a clear and clear program and its further implementation. The new way of organizing the interaction between TsAGI and the Design Bureau did not justify itself from the very beginning, which made it necessary to develop a second version of the project. Finally, problems in the early stages of the B-90 program led to delays in work, and relatively successful projects appeared too late, when their implementation proved impossible.

However, "Bomber-90" cannot be considered a completely useless program. It allowed to gain the necessary organizational, scientific and technical experience. In addition, new technologies and components have emerged from the late bomber designs. They were used in the creation of the Su-34 front-line bomber and, possibly, other modern projects.