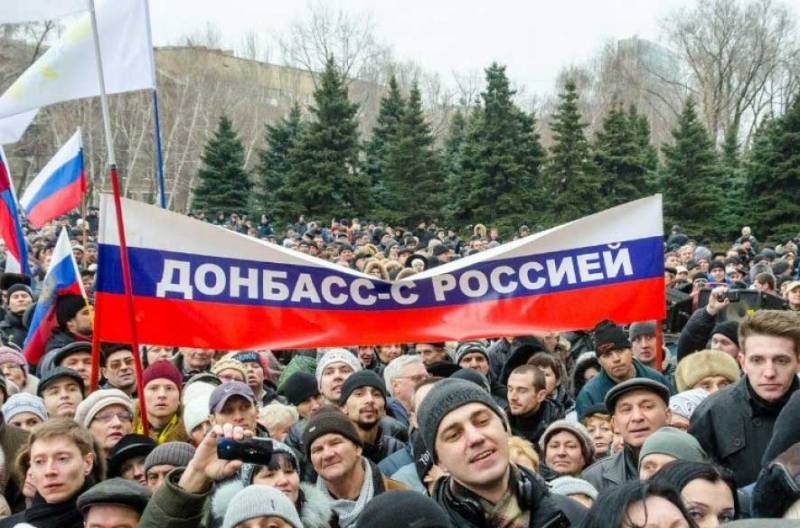 Before my eyes, the war in Donbass is emerging for the third time, and for the third time, somewhere in a parallel Universe, political consultations, negotiations are taking place, politicians declare detente, and events are rolling on as usual. The first time it was the infinitely long spring of 2014, when negotiations were underway in Geneva, Kiev-Moscow consultations, Poroshenko promised peace in two weeks, and near Sloviansk they were already shooting, soon they began everywhere, and for three whole months.

The second time was in late autumn of the same year, despite the Minsk agreements, despite the demarcation lines and consultations of the Normandy Four, there were more and more shots, and the rhetoric of politicians was farther from reality. It all ended with the Debaltsev operation and Minsk-2. As one great general put it:

"The unfinished forest is growing again."

And here again and according to the same signs - first timid shelling of positions, then over the course of a month on the increase:

1. The murder of a 71-year-old pensioner in the village of Trudovskie in the Petrovsky district of Donetsk. The sniper was shooting, shooting, clearly knowing by whom. There was no clear reaction.

2. The murder of a five-year-old child near Yenakiyevo. The UAV was working, the operator of which could not help but see that under his apparatus there was a peaceful village and an ordinary courtyard. There was no reaction, apart from indignation, again.

“As a result of yesterday's shelling of Donetsk, three houses were damaged. A man born in 1962 died. "
Again there is no clear reaction of a military nature. But there are a number of other signs that speak volumes. Thus, preparations for the Victory Parade have been canceled in the LPR. This holiday is celebrated in the Republics almost more widely than in the Russian Federation, and in this context, this event is from the category of incredible. In Donetsk, the windows of the city council on the first floor are being filled with sandbags, which is a clear sign of preparation for street battles; in some organizations, archives are being taken out and work books are being handed out to employees of budgetary organizations. The warning systems were checked and the bomb shelters were put in order. People from the front line are slowly leaving closer to the city centers.

There are no illusions in the Republics: the ratio of the population of Donbass and Ukraine is 1:10, the Corps and the grouping of the Armed Forces of Ukraine is about 1: 6, the exact figure, taking into account the shortage in both armies, is not easy to establish.

At the same time, the Ukrainian side can calmly mobilize and fill its Reserve Corps with people, and in the Republics mobilization is unlikely, according to the experience of 2014/2015, military enlistment offices, troop dispositions and public buildings were subjected to the first strikes. In such conditions, there will simply not be time to call in, arm and form reserve units. Although some preparation is underway, in the face of a massive enemy attack, the organization of normal mobilization measures is impossible.

Only the resistance of the personnel Corps of the People's Militia within the city development is possible. It is the huge Donbass agglomerations that give a certain chance to hold out for a more or less significant time. It is impossible to oppose more without having an air force, solid air defense, OTRK and a reserve. Courage, patriotism and other beauties are for books, in this world big battalions win. The enemy has much larger battalions. And here it is not even Karabakh - there, rather, the inability of Armenians to use modern weapons and their unwillingness to go all the way.

Now it is up to the politicians to decide whether there will be a war, or will it be possible to reach a certain consensus at the last moment, which will postpone it for a certain time. It will not be possible to completely remove this factor, the question of timing and readiness. Well, and a question for Moscow - will it intervene and will it help if it breaks out? Or would he prefer to pretend that nothing terrible is happening? Judging by the statements of politicians, I must stand up, and this is the chance that everything will come down to the death of a certain number of people and artillery ping-pong, without developing into something more, much more terrible and large-scale.

Ctrl Enter
Noticed oshЫbku Highlight text and press. Ctrl + Enter
We are
About Stalin and KhrushchevWhat you didn't want to know about England
Military Reviewin Yandex News
Military Reviewin Google News
16 comments
Information
Dear reader, to leave comments on the publication, you must sign in.