Armata platform and its engine 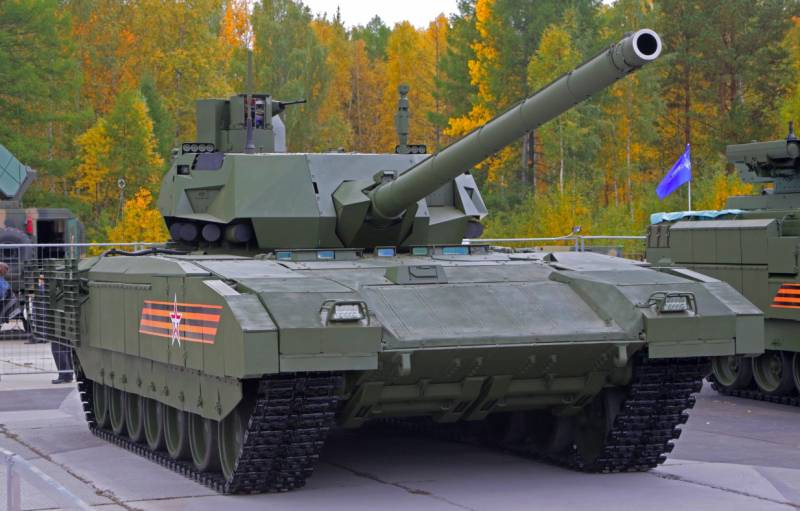 The main tank T-14 on the Armata platform. Photo by NPK "UVZ"

On the basis of the universal tracked platform "Armata", three models of military equipment for various purposes have already been created, and new unified vehicles may appear in the future. A number of unified units and systems are used in existing and anticipated projects, incl. power point. The latter was created specifically for the Armata platform and should ensure the achievement of high technical characteristics.

Platform and its engine

The program for the development of a promising platform and armored vehicles based on it was launched in mid-2011.The main design work took several years, and already in May 2015, the first open demonstration of armored vehicles of a pilot industrial batch took place. In the same period, a long process of testing, refinement and preparation for a full-scale series began.

The basic platform "Armata" was equipped with a unified power plant built on modern units. Its parameters were selected taking into account the need to ensure high mobility characteristics of various equipment with a different layout and combat weight. Depending on the design features of the armored vehicle, the power plant can be placed in the bow or stern of the hull. 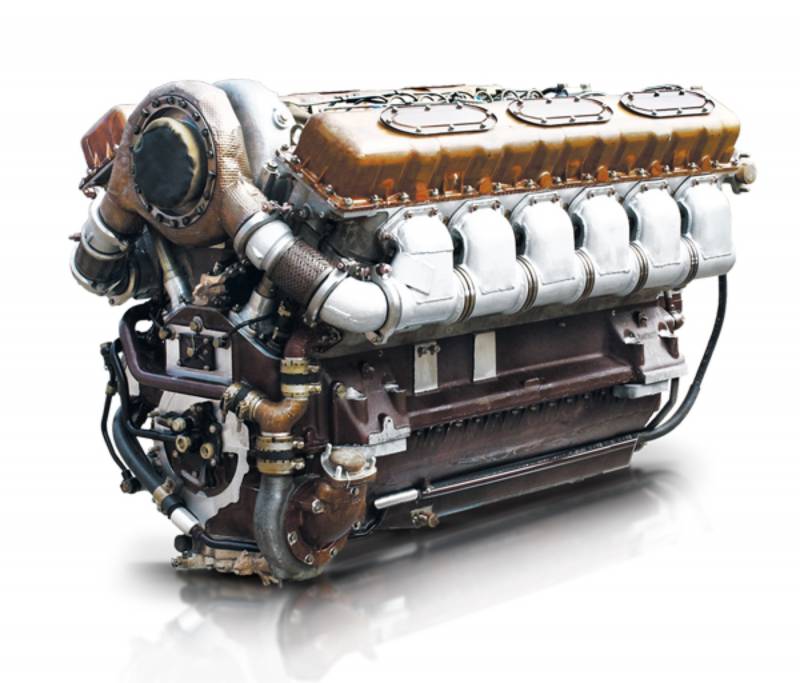 Diesel engine V-92 used on tank T-90. Photo "ChTZ-Uraltrak"
The power plant "Armata" is made on the basis of the 12N360 engine (designations A-85-3A and 2B-12-3A are also known), produced by the Chelyabinsk Tractor Plant "ChTZ-Uraltrak". Curiously, the engine is several years older than the universal platform. According to some reports, such an engine was created for the promising Object 195 tank, but this project did not progress beyond testing.

In the 12s, the development organization began to openly show the new engine at military-technical and industrial exhibitions. At that time, the direct connection of this product with the tank industry was not confirmed. 360НXNUMX was positioned as a motor for special-purpose vehicles and equipment for the oil and gas industry.

Later it became known about the use of the A-85-3A in the project of a promising armored platform. Such engines were to be used on all models of the family and provide high energy parameters - regardless of purpose, layout, combat weight, etc.

The 12N360 engine has 12 cylinders and is built in an X-shaped scheme, which made it possible to reduce dimensions and weight. The length of the product is 900 mm with a width of 1,8 m and a height of 830 mm. Dry weight - 1,5 tons. Thus, the new engine is more compact, but heavier than previous V-shaped tank engines, such as the B-92. 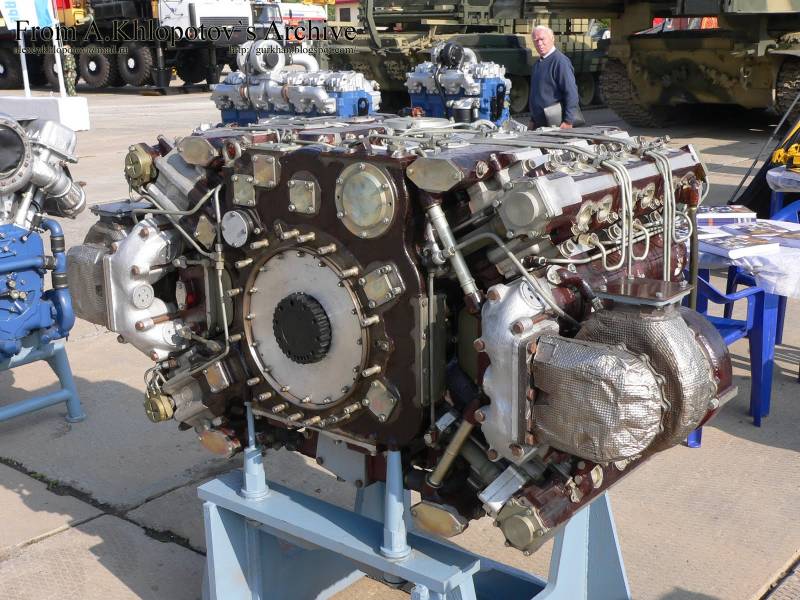 Engine for special machines and installations 12Н360. Photo Gurkhan.blogspot.com
The engine is a four-stroke engine and can use different types of liquid fuel. Cylinders with a total volume of approx. 35 liters have a direct injection system. Turbocharging is used in the form of two gas turbine superchargers serving half of the cylinders. The cylinder block is cooled by liquid. There is an intercooling of the charge air.

The 12N360 engine initially had variable maximum power. The first modification, depending on the mode, could produce from 800 to 1500 hp. at 1800-2100 rpm In the future, it was reported about plans to boost the engine with the achievement of 1800 hp. and keeping the turnover at the same level.

Thus, when installed on vehicles of the Armata family with a combat weight of 50 tons, the A-85-3A engine provides a specific power from 16 to 36 hp. per ton. The optimal value of this parameter is considered to be 25 hp. per ton, and the new engine retains a significant margin of performance for further upgrades. 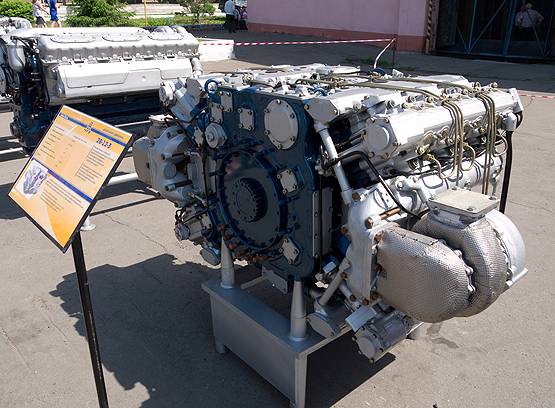 12Н360 at a later exhibition. Photo "ChTZ-Uraltrak"
A mechanical transmission with robotic gear shifting is interlocked with the engine. Its main unit is a central gearbox with integrated reverse. The box has 8 gears, and the reverse allows you to use them when moving forward and backward. Thus, in fact, 16 forward and reverse speeds are provided.

The engine, transmission and other units of the power plant are made in the form of a single unit, fixed in the engine compartment of the MBT or other armored vehicle. In the event of a breakdown, it is possible to remove the entire unit and install a new one. These procedures, when using a repair and recovery vehicle, take about half an hour.

Due to the new power plant, the unified Armata platform has significant advantages over the armored vehicles of older models - both in terms of basic technical characteristics and in terms of project development and subsequent operation. 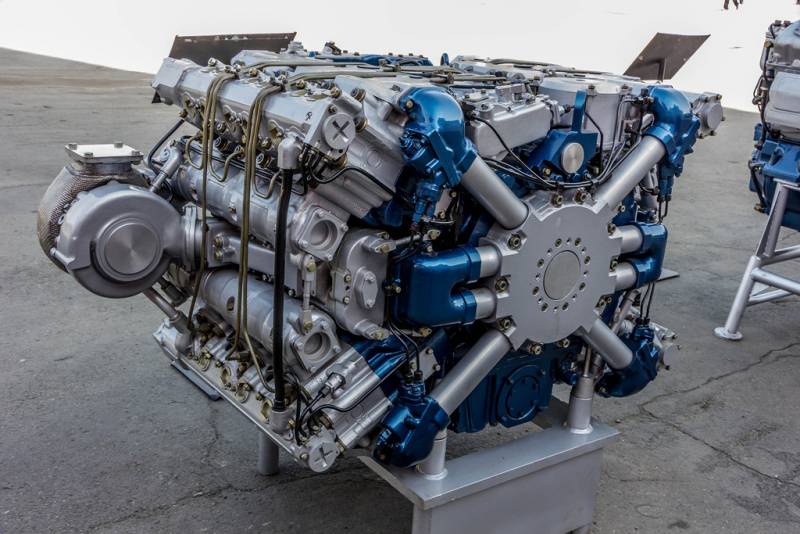 View from a different angle. Photo Vpk.name
First of all, it should be recalled that the domestic armored vehicles will receive 1500 hp engines for the first time. or more. This will give an obvious increase in mobility and flotation, as well as affect overall efficiency. At the same time, power density and specific fuel consumption have improved in comparison with older diesel engines.

12Н360 is more flexible in its application. By setting the required maximum power, it will be possible to adapt it to the requirements of a specific combat or auxiliary vehicle and obtain an optimal ratio of characteristics. Accordingly, equipment of different types can be equipped with a unified engine, and not only within the framework of one platform.

At the stage of development

Over the past several years, various stages of testing of various types of equipment on the basis of the Armata platform have been going on. It is known about the existence of a number of main tanks, heavy infantry fighting vehicles and armored personnel carriers on a common chassis with a unified power plant. 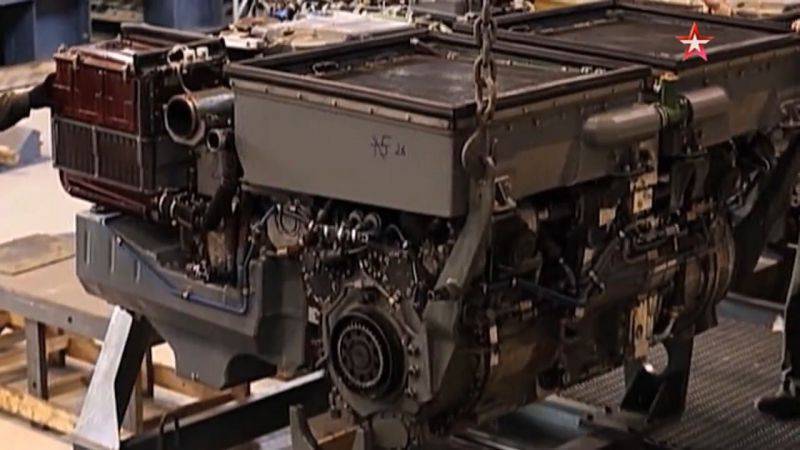 Power block "Armata" assembled. Shot from shopping mall "Military acceptance", shopping mall "Zvezda"
According to the known data, sea trials of such equipment pass, in general, without significant difficulties. In the recent past, the Ministry of Defense has repeatedly published spectacular footage of tanks at full speed, powered by 12N360 engines and other new units. However, as far as is known, during the tests, certain features and shortcomings were identified that require correction.

In the wake of the Army-2019 forum, it was reported that a promising engine for the Armata in terms of efficiency, heat transfer, resource, etc. inferior to modern foreign models, and this does not suit the military. At that time, it was proposed to consider the possibility of using a different engine. However, in the future, there were no reports of platform remotorization.

Probably, the development of the platform and technology based on it in the proposed configuration has been successfully completed and made it possible to get rid of known shortcomings. This allows you to continue the production of armored vehicles and transfer them to the troops for the next scheduled activities. 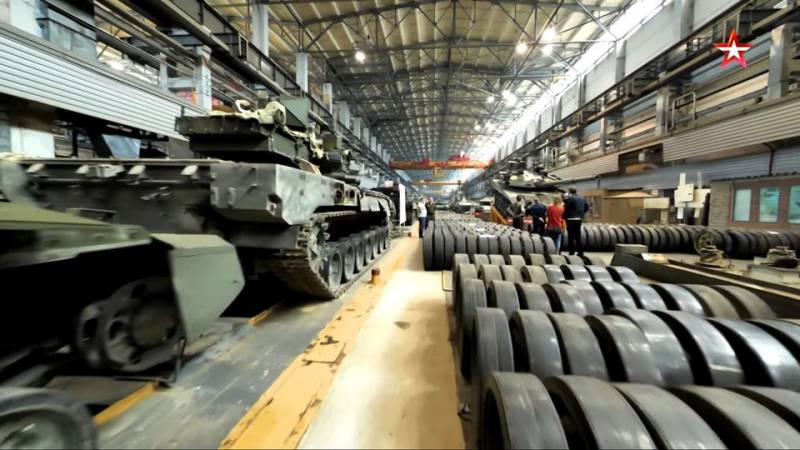 Production of "Armat". Shot from the reportage of the TV company "Zvezda"

An interesting situation takes place in the context of the power plants for the Armata platform. First, a promising engine of an unusual scheme appeared, and only then the development of a new family of equipment began. Then such a motor was modified for new needs, combined with a transmission of the required design and introduced into the unified platform units.

In the foreseeable future, equipment based on the "Armata" will be put into service and will begin to enter the troops in significant quantities. In the distant future, this platform may even become the basis of a fleet of Russian armored vehicles. Together with it, a unified power plant based on the 12N360 engine will become a key component of the army materiel. Obviously, the development of this engine will continue and lead to improved modifications or completely new products.

It is quite possible that the modern 12Н360 will eventually become the basis of a whole family - and will take the same place in stories tank building, as the legendary B-2 in the past. However, while the developers of engines and armored vehicles face more mundane tasks. It is necessary to rid the engine of the identified shortcomings and bring it to full operation, giving the army all the new advantages.