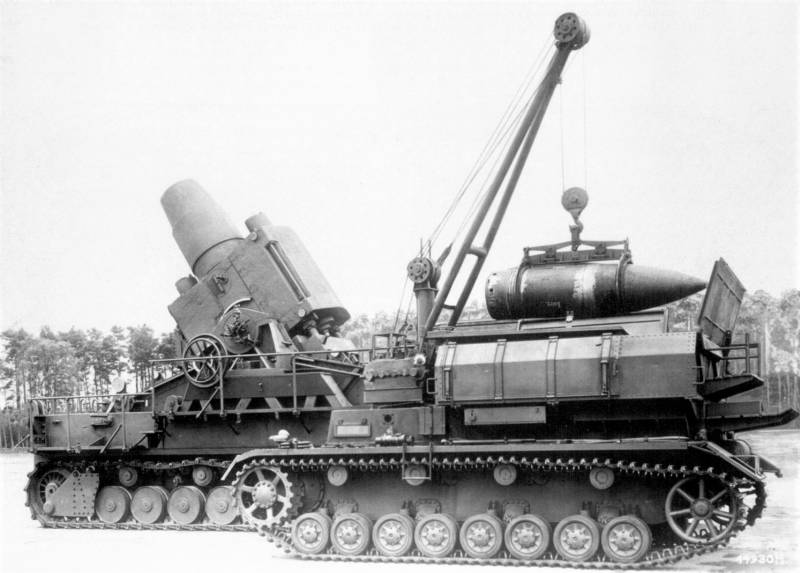 The biggest guns in stories... With the coming to power of Hitler in 1933, work on the creation of new types of weapons and military equipment intensified in Germany. The militarization of the country continued at an increasing pace, while the Germans managed to achieve success in almost all areas. They were also very noticeable in artillery, where the German design school was especially strong and relied on the rich experience and legacy of the First World War.

The experience of the First World War dictated the construction of super-powerful artillery systems that could be effectively used against long-term enemy fortifications or especially fortified positions. Fortunately, the targets for the new guns were, for example, the French line of the Maginot fortifications. Combat experience told the Germans that monstrous weapons were effective against fortresses and forts. A living confirmation of this was the famous "Big Bertha".

The creation of new super-large-caliber artillery systems in Germany was thought of in the mid-1930s. In 1934, the Armaments Directorate of the Ground Forces sent to German enterprises the terms of reference for the creation of guns capable of hitting protected objects with concrete walls up to 9 meters thick with a single projectile.

Already in 1935, the Rheinmetall-Borzig company developed a project for a 600-mm mortar. It was assumed that this artillery system would be able to launch shells weighing two tons at a distance of four kilometers. Systematic work on the project began in 1936. And the following year, the military were able to appreciate all the achievements of German designers.

The design of the new artillery installation was carried out under the direct supervision of General of the Artillery Karl Becker. He oversaw the project from the military side and made several valuable comments and suggestions during development. It was in honor of this officer that the 600-mm self-propelled mortar, which at the plant was simply designated Gerät 040 (product 040), received the semi-official name "Karl". This name is firmly entrenched in the installation throughout post-war historiography.

In total, the German concern Rheinmetall-Borzig has assembled seven self-propelled mortars. Six of them took part in the hostilities. Since they were all truly piece goods, each of them received its own name:

The 600mm Karl mortar, which could have been used against French and Belgian fortifications, was late for the invasion of France. The French army and the British expeditionary force were defeated quickly enough, and the Maginot Line itself did not play any significant role, failing to protect France from defeat.

The first installation was presented to the German military only at the beginning of July 1940. At the same time, the full delivery of the 600-mm self-propelled mortar "Adam" took place only on February 25, 1941. The Wehrmacht received the sixth installation "Qiu" on July 1, 1941. And the seventh mortar "Fenrir" was ready only in 1942. On it, German engineers worked out the option of installing a new 540-mm gun.

The main feature of the Karl mortars was a self-propelled carriage on a tracked chassis. Mortars could move and maneuver independently, reaching speeds of up to 10 km / h. At the same time, they had an extremely limited power reserve. They were to be transported to their location by rail on specially created interconnected five-axle platforms.

Transportation of mortar "Karl" on railway platforms
Transportation by road on paved roads on special heavy trailers was also possible. For this, the mortar could be disassembled into four component parts.

The tracked undercarriage of the self-propelled mortar received a hydromechanical transmission and consisted of 11 small-diameter road wheels and five support rollers, a front drive wheel and a rear sloth on each side. The colossus weighing 126 tons was set in motion by an in-line 12-cylinder liquid-cooled diesel engine Daimler-Benz 507. Engine power of 750 hp. from. was enough to provide the artillery mount with a speed of up to 10 km / h.

The dimensions of the installation were also striking. The length of the self-propelled mortar was 11,37 meters, width - 3,16 meters, height - 4,78 meters. The mortar crew consisted of 16 people. At the same time, the hull armor was symbolic and was bulletproof and splinterproof - up to 10 mm.

The artillery part of the installation was represented by a 600-mm rifled mortar with a barrel length of 8,44 caliber. The mortar was installed on a special machine in the middle of the hull. The barrel of the mortar was monoblock. The lifting mechanisms provided maximum vertical guidance up to +70 degrees, the horizontal guidance angle without turning the body was 4 degrees. The rate of fire of the mortar was small - about one shot every 10 minutes. 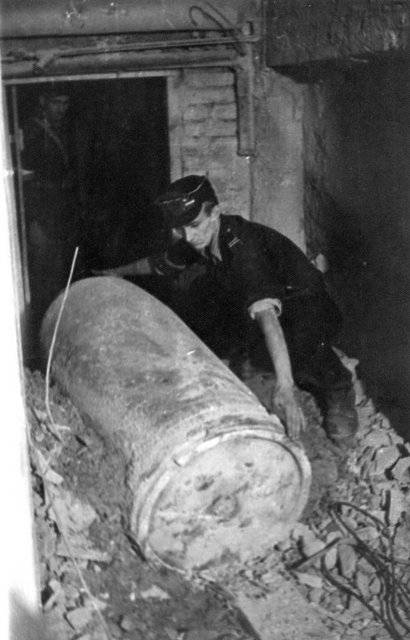 The combat debut of German super-powerful artillery systems, which were late by the time the operation began against France, took place on June 22, 1941, during the assault on the Brest Fortress. For the campaign against the USSR, the Germans allocated two batteries of the 833th artillery battalion of special power created before the war. The 1st battery, consisting of mortars "Adam" and "Eve" and 60 shells for them, was transferred to the 17th Army of Army Group "South". And the 2nd battery of the 833th division arrived in Terespol.

Near Brest were mortars "Thor" and "Odin" and 36 shells for them. The "Center" group planned to use them during an attack in the area of ​​the Brest Fortress. It is noteworthy that the 1st battery in the 17th army fired only 4 shells. After that, the mortars were simply taken out from the front. The report of the commander of the 4th corps on June 23 indicated that there was no longer a need for the further use of 600-mm mortars. At the same time, technical difficulties arose during their operation. 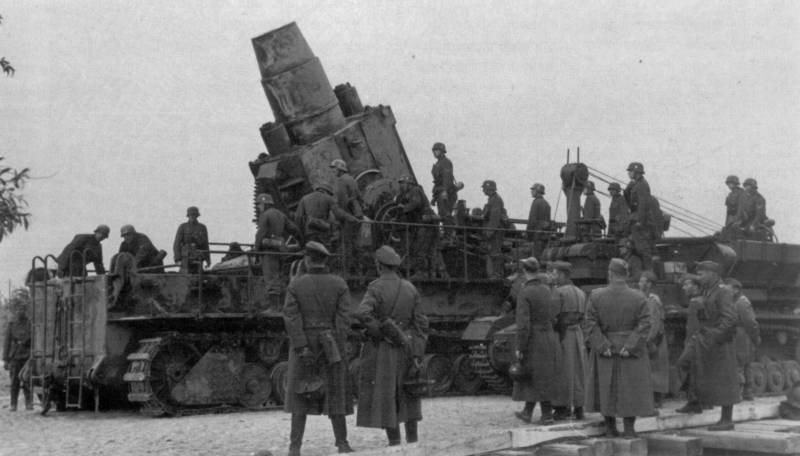 Self-propelled mortar "One" is preparing to fire in the area of ​​the Brest Fortress, photo: waralbum.ru
At the same time, mortars operating against the fortifications of the Brest Fortress used up almost all the ammunition. They opened fire, together with the entire artillery group of German forces concentrated in the area, in the early morning of 22 June. At the same time, on the first day of the war, mortars made only 7 shots. Self-propelled mortar "Thor" fired three shells, the fourth shot failed, difficulties arose. Mortar "One" fired 4 rounds at the fortifications, the fifth was not produced due to a defect in ammunition.

Until the evening of June 22, both mortars stood with shells jammed in the breeches, it was not possible to discharge them.

At the same time, the effectiveness of their fire on that day was very conditional, but it made a strong impression on all eyewitnesses. Shells "Karlov" left after explosions craters with a diameter of 30 meters and a depth of up to 10 meters. At the same time, a cloud of sand and dust rose into the sky to a height of 170 meters.

Despite the monstrous explosions, after the capture of the fortress, the Germans found that there were no direct hits at the concrete fortifications at all. In the first fire raid, the mortars fired four rounds at the bunker located on the Western Island. It was a pillbox next to the casemated reduit, which housed the district school of border troops drivers. At the same time, there was no one in the field filling positions and bunkers on the Western Island at the time of the shelling.

At the same time, already on June 22, one hit of the "Karl" shell was recorded in the building of the 9th frontier post on the Central Island. The shell hit the wing where the families of the border guards lived. These artillery monsters have certainly reaped their bloody harvest. Everyone who found themselves near the explosions of the shells of these mortars could only sympathize. 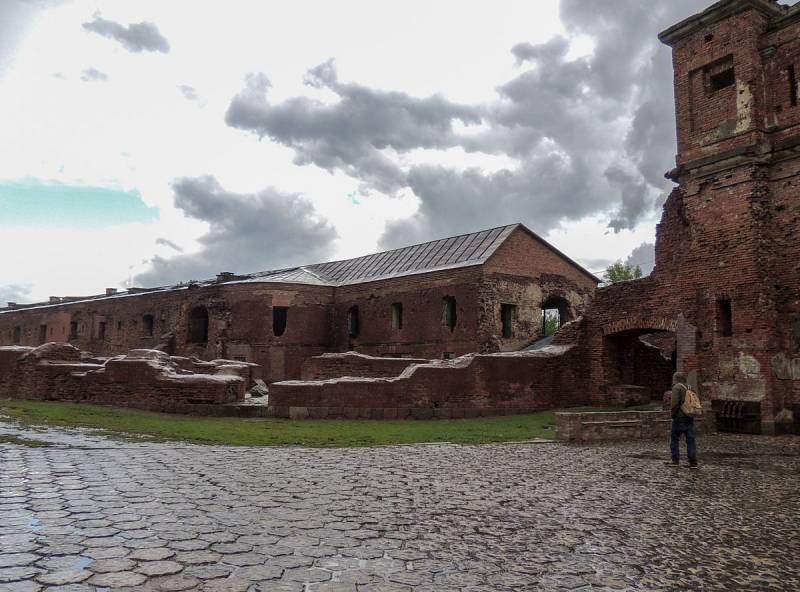 Remains of the semi-tower near the Terespolskie gates destroyed by the hit of the "Karl" mortar, photo from the author's archive
Despite the fact that the Germans did not record direct hits on the pillboxes located on the territory of the fortress, the Karlov shells hit ordinary buildings and fortifications. So already on June 23, a direct hit of a 600-mm projectile into the half-tower of the Citadel near the Terespol Gate was recorded. The Karl shell destroyed the half-tower almost to the ground, its ruins can be seen even today. At the same time, this hit destroyed the center of defense of the Soviet troops in the area of ​​the Terespol Gate.

In just 22, 23 and 24 June "Karls" fired 31 shells at the fortress, after that there were five shells left, three of which could not be used for shooting. As the subsequent inspection of the fortress showed, two of the shells that fell on its territory did not explode. In general, the effectiveness of the artillery system was highly appreciated by the Germans. The report sent to Berlin noted the high efficiency of the guns.

Not falling into the relatively small pillboxes, 600-mm shells destroyed buildings and fortifications of the 455th century fortress. The defenders of the fortress felt the explosions of these shells on themselves, even while in the basements. As the platoon commander of the XNUMXth Infantry Regiment Alexander Makhnach later recalled, the Karlov strikes shook the basements of the regiment's barracks:

"From the blast wave, people were bleeding from their ears and nose, their mouths could not be closed." 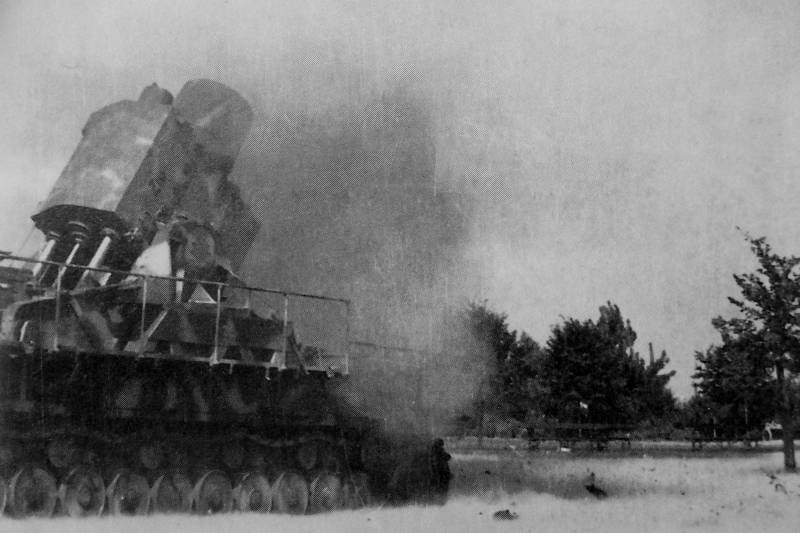 Mortar "Karl" near Warsaw during the shooting, photo: waralbum.ru
The shelling of the Brest Fortress became for the Karl mortars, perhaps, the main event of the entire Second World War. Although later they were used during the siege of Sevastopol, and in August 1944, during the suppression of the Warsaw Uprising.

We can only bow to the waist to the defenders of the Brest Fortress, who held the defense under the fire of these monstrous Wehrmacht artillery "clubs" in the terrible June 1941.

The fate of self-propelled mortars

Only one installation "Karl", captured by the troops of the Red Army, has survived to this day. Residents of Russia and guests of our country can see this self-propelled mortar in the exposition of the armored museum in Kubinka. At the same time, it is not known for certain which installation was captured by the Soviet troops. For many years it was believed that it was "Ziu", but during the restoration work in Kubinka, the inscription "Adam" was found under a layer of paint. It was this proper name that was left on the mortar, which is now in the Moscow region.

Mortar "Thor" in the summer of 1944 was badly damaged during an air raid. Later, the remnants of the self-propelled mortar were captured by the Allied troops. In early 1945, German soldiers themselves blew up mortars "Wotan" (formerly "Eva") and "Loki", later their remnants were captured by the US army. 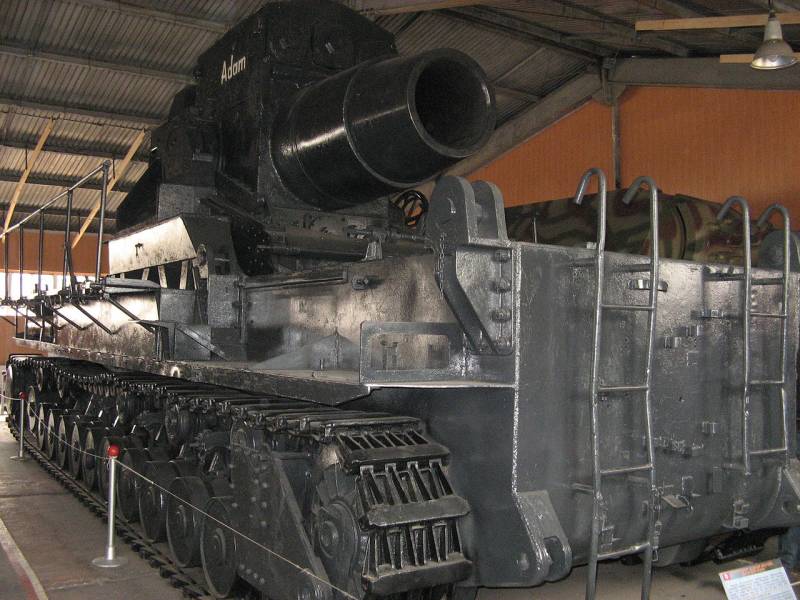 600-mm self-propelled mortar "Karl" in Kubinka
The Americans also got the experimental installation "Fenrir". They managed to test the mortar at the Aberdeen Proving Ground, but after that, for some reason, they were not transferred to the museum, but sent for scrap. Moreover, the exhibit was truly rare.

Another mortar "One" was also blown up by the German crew due to the impossibility of evacuation.

One of the mortars, as we noted above, was captured in its entirety on April 20, 1945 by Soviet troops in the area of ​​the city of Jüterbog.

The fate of another installation remains unknown.