The Boscombe Down incident: the inglorious death of the Aurora 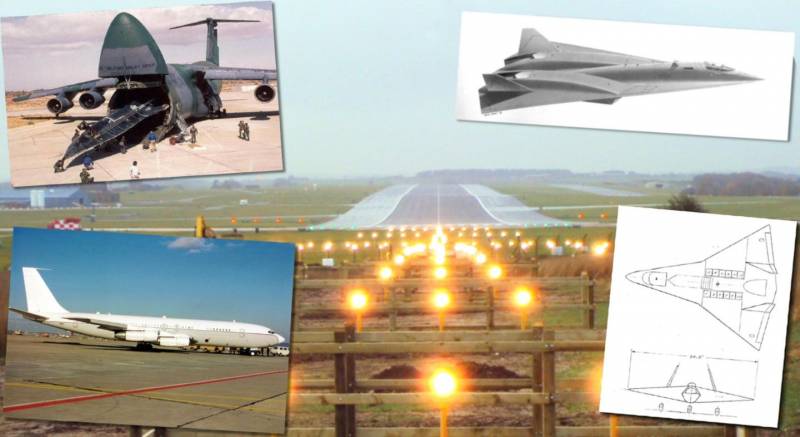 Collage TheDrive on the Boscombe Down incident.

The British airbase Boscombe Down is an analogue of the American "zone 51", designed to test the most modern and promising military aircraft. Initially, the base belonged to the DERA agency, whose functions were in many ways similar to the famous American Defense Advanced Research Projects Agency DARPA. Since 2001, the office was abolished, and Boscombe Down came under the jurisdiction of the British Department of Defense and the private QinetiQ. 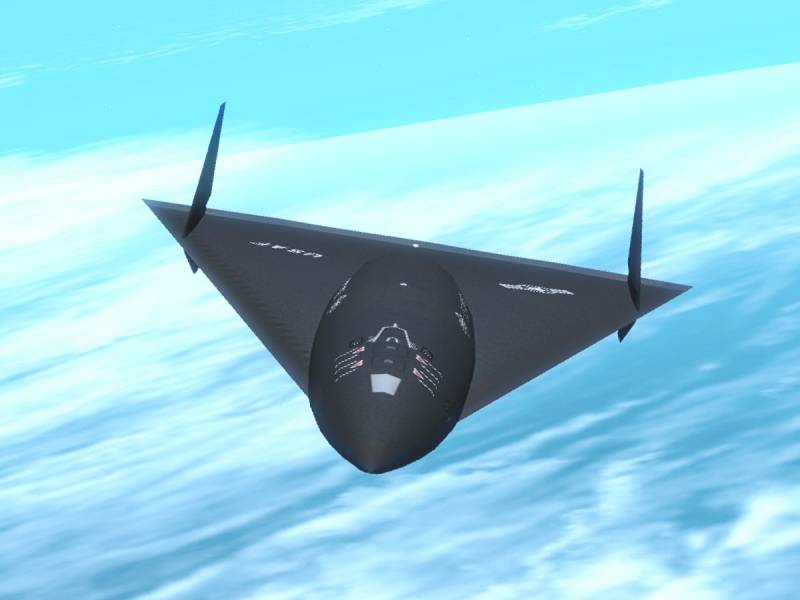 The legendary hypersonic Aurora. Computer reconstruction. Source: wikimedia.org
Most of the stories associated with Boscombe Down, one way or another, suggest the notorious plane crash back in 1994. This is largely due to the veil of secrecy, which London still refuses to remove. The lack of official comments and a real conspiracy of silence force conspiracy theorists to invent the most incredible versions of what happened. One of the most plausible scenarios was the crash of an experienced American reconnaissance aircraft. But first things first.

Late in the evening of September 26, an unknown plane crashed on the runway number 23 of the Boscombe Down air base. Eyewitnesses claim that this happened during takeoff and the car was not seriously damaged. According to the Independent, the aircraft at least broke the front pillar and froze, with its nose buried in the concrete.

The special services approached the protection of the secret car very responsibly - they covered it with a tarpaulin, cordoned off the perimeter and carefully moved it to a covered hangar. There is evidence that several ambulances were seen on the runway. This is rather strange, given the not very large-scale nature of the damage.

There is still an inconsistency in the version voiced by the Independent.

The authors of the publication claim that among the first to arrive at the crash site were SAS officers in civilian clothes. Question: how did the observers manage to determine the departmental affiliation of those who came to the rescue in Boscombe Down, if they were in civilian clothes?

A certain Mr. Oliver, who watched what was happening at the airbase, generally spoke about two SAS visits to the scene of the incident. The first time the special forces arrived by car, and the second - by Agusta 109 helicopters, which, as it turned out, could only belong to SAS in 1994.

Further events unambiguously indicate that the crashed aircraft belonged to the American Air Force. Two days after the September 28 incident, the giant C-5 Galaxy arrived for the vehicle from the United States and took it home from a hangar in Boscombe Down. It is noteworthy that even the flight of a military transport plane took place according to a special scenario. Initially, the giant was sent to the German Ramstein, but already on the approach to Europe, it was redirected to a British airbase. Probably, the pilots of the C-5, having flown the Atlantic, did not fully know about the real purpose of the trip. 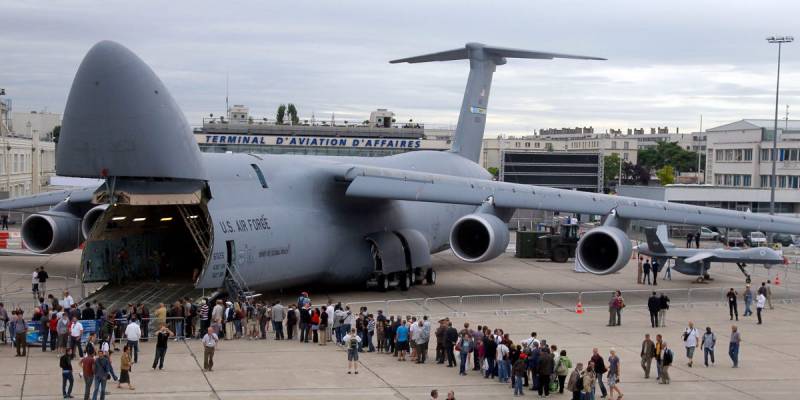 C-5 Galaxy promptly evacuated the crashed plane to its homeland.
In this storiesby and large, there is nothing extraordinary.

The aircraft, even an experimental one, crashed and was evacuated by a military transport aviation in USA. Such incidents happen, sometimes with much more serious consequences. But 27 years have passed, and the British government refuses to comment on what happened in September 1994. Let's say this is a deliberate concealment of really classified data, or, perhaps, a deliberate attraction of public attention. Say, the UK also has its own "zone 51", and London takes part in the top secret programs of the US Air Force.

Be that as it may, it only adds fuel to the burning hearts of conspiracy theorists.

Immediately after the government's refusal to comment on what happened in Boscombe Down, there was a darkness of investigators who literally all the oddities taking place in the skies of Great Britain at that time were associated with the crashed plane.

Air Forces Monthly mentions two American planes that landed at the airbase in the first two days after the incident. The first was the United States Air Force C-12 Huron. There was absolutely nothing unusual about his appearance, except that this car had not been noticed here before. As commentators note, such aircraft were used by the Pentagon for intra-European transfers.

But with the landing of the Boeing 707 at Boscombe Down airbase, everything is not so simple. Firstly, the plane was unmarked, and, secondly, after 1994, many suspected it of being serviced by the CIA and the Air Force Special Operations Command (AFSOC). The E-System company, which for some time owned the plane, also added fuel to the conspiracy fire. In the early 90s, the office was spotted in collaboration with the CIA in the field of work on secret flying objects. Gradually, outside observers and analysts began to realize that it was not a simple plane that had crashed on the Boscombe Down runway. The main profile of his work could be intelligence in the interests of the Air Force and the CIA.

The most interesting thing is that the online edition TheDrive got hold of a description of the crashed plane somewhere. According to eyewitnesses, the vehicle had a charcoal-gray fuselage with beveled fins and characteristic cheekbones in the bow. The mysterious plane was about the size of a large fighter and had a canopy that flipped forward. It can be seen that the Stealth plane crashed in Britain. And the Americans took him not somewhere, but immediately to the secret Lockheed Skunk Works, better known as USAF Plant 42 Airport in Palmdale. Experimental aircraft for the US Air Force are assembled here. Now, in particular, at the 42nd plant, work is underway on an unmanned stealth reconnaissance aircraft RQ-170 Sentinel.

What kind of car crashed at a secret British airbase?

Some analysts believe that it was the legendary and top-secret "Aurora" - an aircraft that in the 90s was not talked about only from the iron. Numerous eyewitness testimonies speak in favor of testing the aircraft at supersonic (or even hypersonic).

Two years before the accident in the United States, a radio amateur picked up a signal from an aircraft descending from a height of 20 kilometers. Around the same time, in Holland, local residents were frightened by powerful sonic booms from an unidentified plane. The researchers separately mention that it could not have been Concord - civil aviation services did not record its flight. In Great Britain itself, radio amateurs recorded numerous requests for the landing of high-altitude aircraft at the Machrihanish airfield, which until 1995 belonged to the US Air Force.

The Air Forces Monthly mentioned in 1997 suggested that the incident at Boscombe Down was related to the crash of an ASTRA (Advanced Stealth Reconnaissance Aircraft) aircraft. It is likely that his flights were taken for testing the notorious Aurora.

The ASTRA aircraft appeared as a result of work on a deep modernization of the YF-23 stealth aircraft, which participated in the American Advanced Tactical Fighter competition for the development of a fifth generation fighter. Lockheed Skunk Works could lead a separate project of a reconnaissance high-altitude vehicle based on the YF-23 prototype.

But at the moment there is not a single reliable information about the existence of "Aurora" or even a machine of the ASTRA project.

Former Skunk Works director Ben Riya has debunked the myth of the Aurora scout. Allegedly, a certain Pentagon colonel accidentally gave the name to the development program for the B-2 stealth bomber "Aurora". Since then, for some reason, these two projects began to live in two parallel destinies: the B-2 turned into a tangible machine, and the hypersonic Aurora remained in the minds of conspiracy theorists.

However, this does not add clarity to the question of the origin of the plane crashed on the Boscombe Down runway. 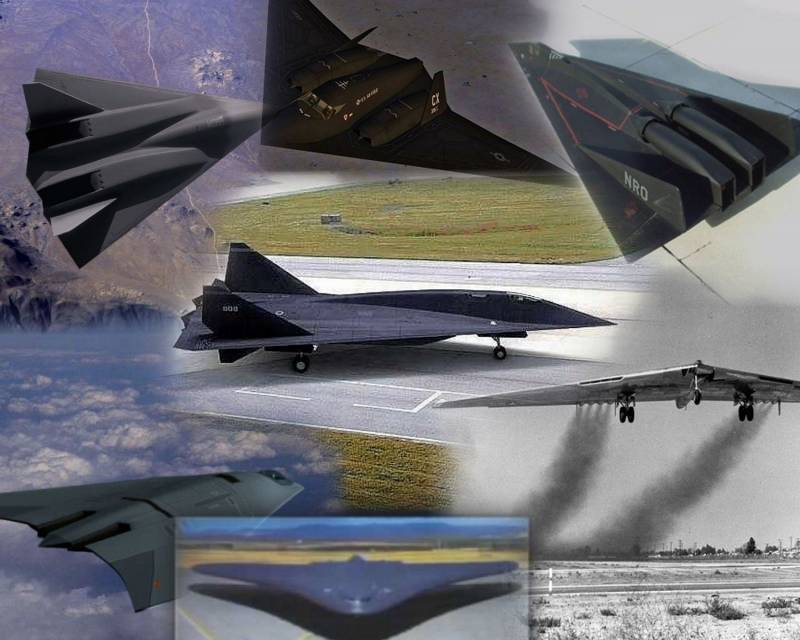 The alleged appearance of the TR-3A Black Manta. Source: pinteres.com
The new version was put forward by TheDrive, recalling the American project TR-3A Black Manta. This stealth was supposedly developed in the late 80s as a subsonic tactical reconnaissance, optionally equipped with a laser target illumination system for missile strike.

TheDrive authors believe that there were indeed several such aircraft in the US Air Force. And that one of them died ingloriously at Boscombe Down. But in this case, we are only talking about assumptions, not supported even by a photograph of poor quality.

Ctrl Enter
Noticed oshЫbku Highlight text and press. Ctrl + Enter
We are
The present and future of unmanned aircraft. Part of 2An-12 in Afghanistan
Military Reviewin Yandex News
Military Reviewin Google News
36 comments
Information
Dear reader, to leave comments on the publication, you must sign in.