A dangerous, but not numerous enemy. SPG Ferdinand 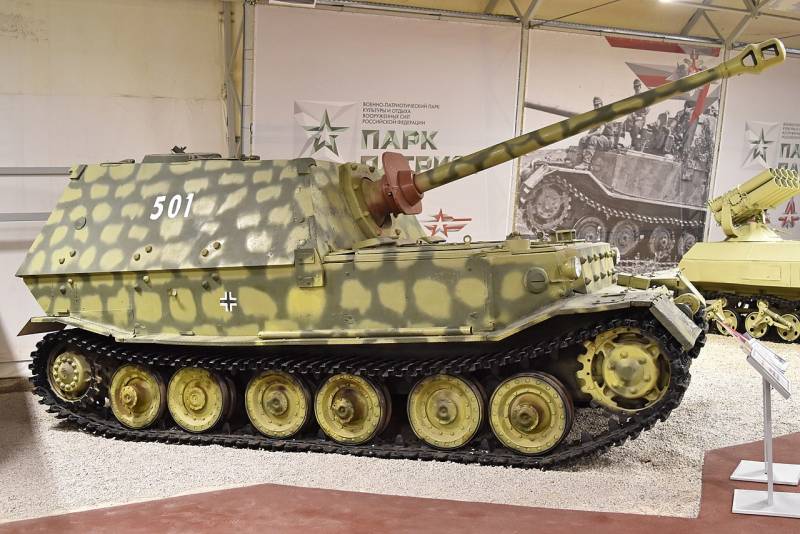 ACS Ferdinand from the Patriot park (previously kept in the museum in Kubinka). The car became a trophy of the Red Army during the Battle of Kursk

In July 1943, Hitler's Germany first used the latest self-propelled fighters tanks Sd.Kfz. 184 / 8,8 cm StuK 43 Sfl L / 71 Panzerjäger Tiger (P) / Ferdinand. These vehicles, distinguished by powerful armor and weapons, were supposed to break through the Soviet defenses and ensure the general offensive of the Wehrmacht. However, despite all the technical advantages, the Ferdinands near Kursk and in other sectors of the front often suffered serious losses.

The production of the Ferdinand self-propelled guns started at the beginning of 1943 and lasted until the summer. In a few months, only 91 armored vehicles were manufactured; production stopped there and was no longer resumed. All self-propelled guns were distributed between the 653rd and 654th heavy anti-tank battalions (Schwere Panzerjäger Abteilung), included in the 656th tank regiment. The battalion initially included three companies of three platoons and had 45 armored vehicles. Later, as the materiel was lost, the battalions were reorganized and optimized.

The hull of the Sd.Kfz.184 self-propelled guns was made of rolled armor of great thickness. Slightly inclined frontal parts were 100 mm thick and were complemented by a 100 mm overhead screen. The sides were made of sheets with a thickness of 80 mm (top) and 60 mm (bottom); feed - 80 mm. The hull received a 30 mm roof and a bottom with a thickness of 20 to 50 mm. The wheelhouse with the gun corresponded to the hull in its protection. She had a 200 mm forehead and 80 mm sides and stern. The frontal armor was supplemented with a 125 mm thick mask. 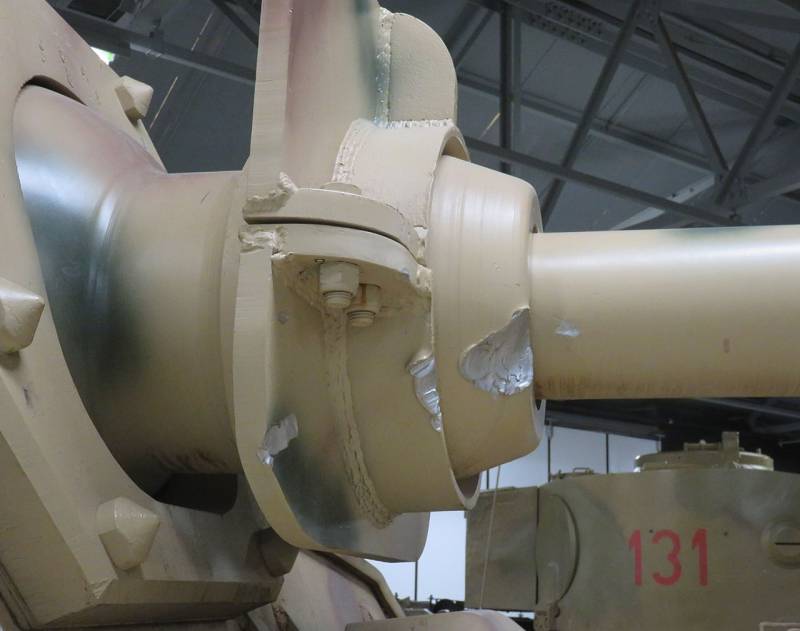 Mask, gun and forehead with traces of impact - "Ferdinand" from the Tank Museum in Bovington
In the wheelhouse, the PaK 43/2 anti-tank gun of 88 mm caliber with a barrel length of 71 clb was installed. The high power of this weapon led to the need to use a developed two-chamber muzzle brake and recoil devices. Horizontal aiming was carried out within a sector with a width of 28 °, vertical - from -8 ° to + 14 °.

The PaK 43/2 cannon used unitary shots with the Pzgr.39-1 armor-piercing tracer projectile (the most massive ammunition), the Pzgr.40 / 43 subcaliber or the Sprgr.43 high-explosive fragmentation projectile. Armor-piercing ammunition was distinguished by its high performance. So, from 100 m, the Pzgr. 39-1 projectile pierced more than 200 mm of homogeneous armor (tilt 30 ° from the vertical), and the Pzgr. 40/43 - approx. 240 mm. Penetration per 1 km was 165 and 193 mm, respectively. From 2 km, shells penetrated 132 and 153 mm of armor.

At the time of its appearance, the PaK 43/2 cannon penetrated the armor of all anti-Hitler coalition tanks from a distance of at least 2-2,5 km. This situation persisted until 1943-44, when new heavy tanks with more powerful armor appeared in the armament of the Allied countries. However, they also took risks when approaching Ferdinand. 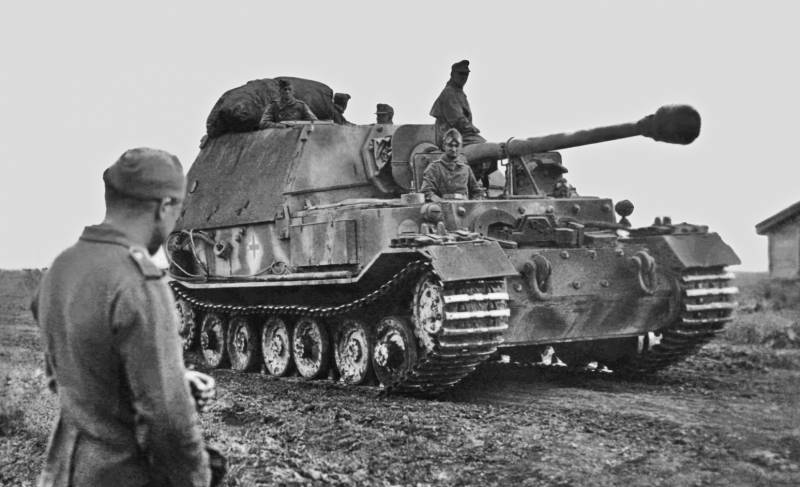 Reservations with a thickness of up to 200 mm provided the German self-propelled gun with protection from almost all expected threats. However, complete safety was not guaranteed. Already during the first episodes of the combat use of the Sd.Kfz.184 self-propelled guns, they suffered losses from mines, artillery and infantry weapons... Soon, Soviet specialists examined the captured vehicles and conducted shelling tests, resulting in recommendations for combating such equipment. 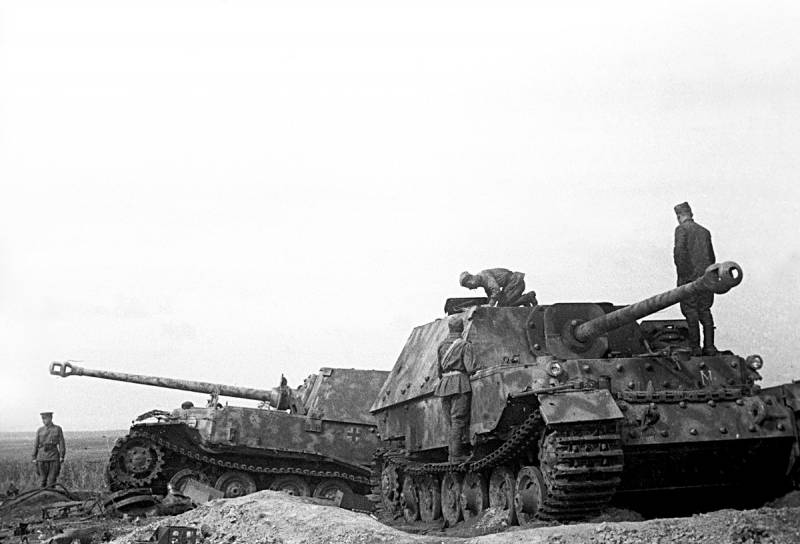 A couple of destroyed self-propelled guns. The commander's "Ferdinand" in the background came under artillery fire and lost its speed, after which the Red Army men set it on fire
It was found that the 45-mm and 76-mm cannons of the Red Army only hit the side armor and only with the use of certain types of projectiles, and in a limited range of ranges. 85-mm shells from 1 km pierced the side or got stuck in it, but knocked out fragments from the inside of the armor. The ML-20 howitzer showed the best results. Its 152 mm projectile split the frontal sheet of the hull and the overhead shield with a total thickness of 200 mm.

Both anti-tank battalions on the Ferdinands were involved in Operation Citadel. The newest self-propelled guns, with the support of other armored vehicles, were supposed to break through the Soviet defenses on the northern face of the Kursk Bulge. Over the next few weeks, the Sd.Kfz.184 self-propelled guns actively participated in battles, inflicted damage on the Red Army and suffered losses. At the same time, the main features of such a technique were fully shown. 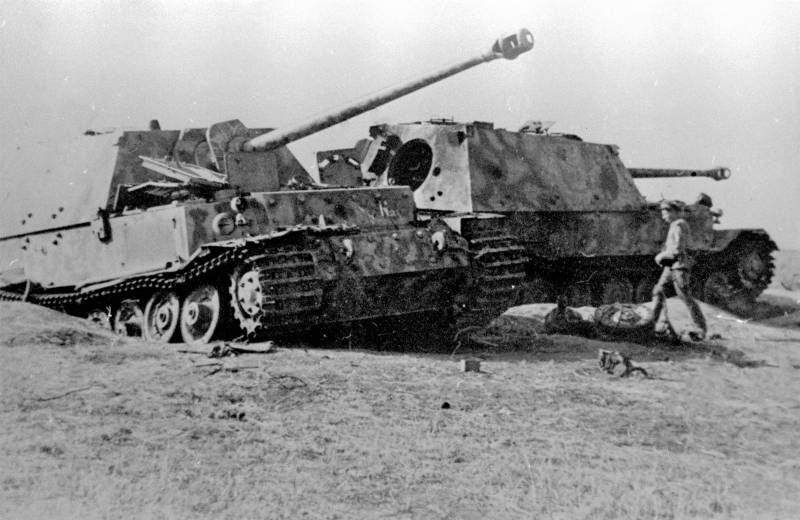 The same cars from a different angle
The first battles with Ferdinand's participation took place on July 8-9, 1943. Using their technical advantages, German self-propelled guns attacked Soviet tanks and fortifications from a long distance. During the Battle of Kursk, they reported on the destruction of hundreds of armored vehicles of the Red Army - although this is far from consistent with Soviet data. At the same time, there were serious losses. Until the end of August, for various reasons, 39 self-propelled guns were lost, and 50 remained in service.

About a quarter of the losses of the "Ferdinands" fell on the first days of the battle and were provided by the Red Army sappers. 10 self-propelled guns were blown up by mines and caught fire or were set on fire by the Soviet infantry after the loss of progress. Attempts to evacuate the damaged equipment failed due to lack of the necessary funds. 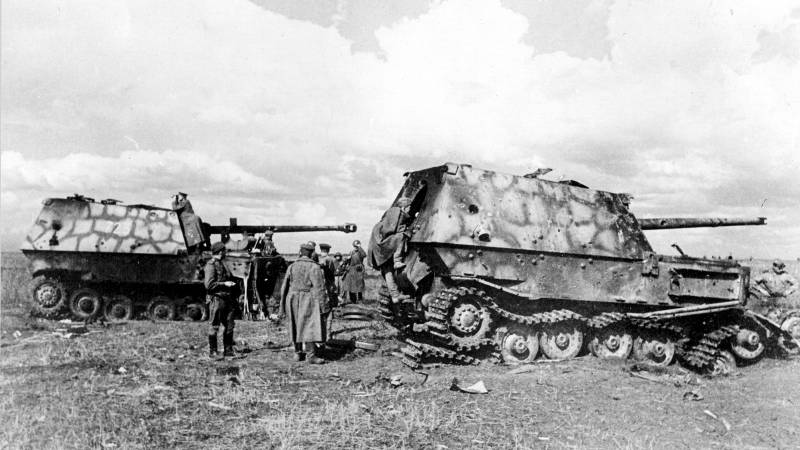 A couple more "Ferdinands" with a damaged chassis
The artillery and tanks of the Red Army had limited potential against the German self-propelled guns, but still inflicted some damage on them. So, at least 5-6 armored vehicles were damaged undercarriage and / or other units, after which they were abandoned. In particular, one of the self-propelled guns caught fire due to the hit of a 76-mm projectile in the area of ​​the fuel tank. Cannon damage known. Several vehicles came under fire from Soviet heavy howitzers with fatal consequences. One of them died from a direct hit of a 203-mm projectile in the commander's hatch. There is a known case of the destruction of an ACS as a result of a smaller-caliber shell hitting the open hatch of the driver.

In the Kursk direction, the Red Army Air Force was actively working, but only one successful attack on Ferdinand is known for certain. A bomb from a Pe-2 plane hit the roof of the fighting compartment and destroyed it in an explosion.

The result of a direct hit from an aerial bomb
Subsequently, the remaining fifty Ferdinand machines were used at the Nikopol bridgehead, in Italy and in Germany. Gradually, for one reason or another, most of the existing self-propelled guns were lost. At the same time, the causes of losses did not fundamentally change, although their ratio depended on various factors.

In the Sd.Kfz.184 project, solutions were used aimed at obtaining the maximum possible characteristics of protection and firepower. At the same time, there were several controversial features and obvious shortcomings. In July 1943, vehicles in this configuration entered the battlefield and partially met expectations. The cannon and armor showed their best side - but other problems arose.

On the Kursk Bulge and on other fronts, the Ferdinands fought not only with tanks. The self-propelled guns risked being blown up by a mine, falling under fire from heavy howitzers, getting an unsuccessful hit on a vital unit, etc. There was also a possibility of breakdown, and the lack of evacuation means often led to the actual loss of equipment. 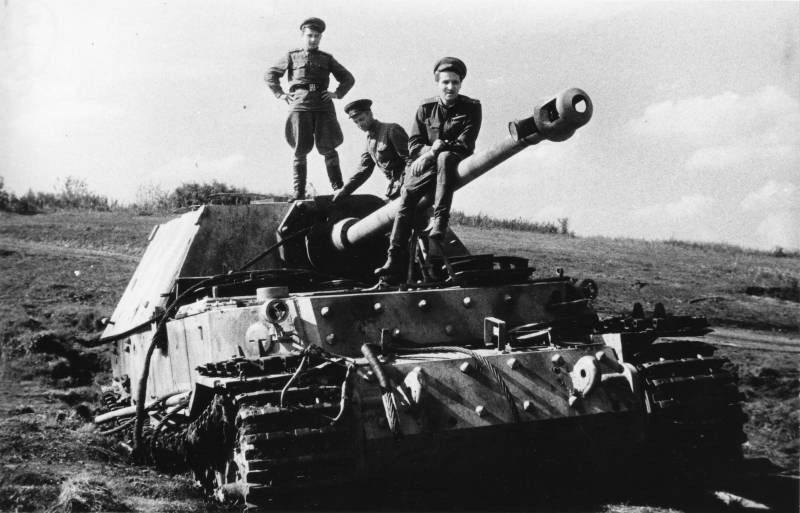 The famous photo of Y. Khalip with a padded self-propelled gun. The journalist and writer K.M. Simonov
The small number of self-propelled guns became a serious problem. Two battalions with nine dozen armored vehicles could affect the course of a separate operation. However, the value of such a grouping was constantly decreasing due to losses and due to the impossibility of replenishing them. Already in 1944, in different sectors of the front, it was necessary to use only individual units of small numbers and with a reduced combat potential.

In general, the German self-propelled tank destroyer Sd.Kfz.184 Ferdinand posed a great danger to tanks and stationary facilities of the Red Army and allied countries. An open confrontation with such an enemy threatened with significant losses and, at least, complicating the situation in a specific sector of defense.

However, already in their first battle, the Ferdinands met with a well-organized echeloned defense, which knocked out almost half of such equipment in a few weeks. Thus, practice has shown again that in a real war, the tabular characteristics of equipment are of great importance, but are not decisive. There are many other factors that can neutralize the technical superiority of some samples over others. As the fate of the "Ferdinands" shows, as well as the results of the Battle of Kursk and the Great Patriotic War in general, our army has mastered and used this knowledge well.