Battle of Austerlitz: battle in the center and on the right flank of the Allied army 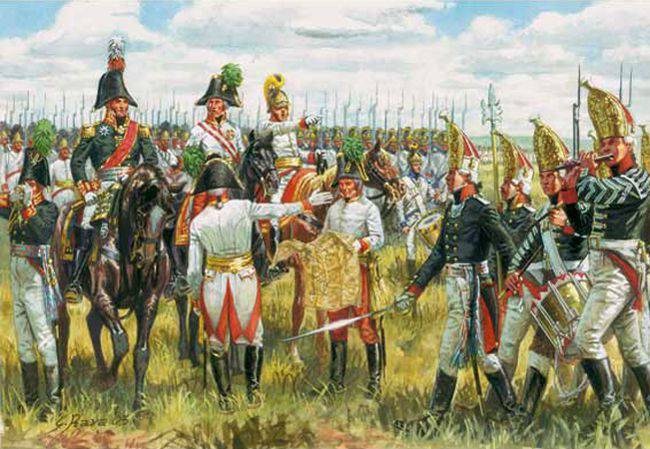 The cavalry guard is short-lived,
And because he is so sweet.
The pipe is blowing, the canopy is thrown back,
And somewhere the ringing of sabers is heard ...
Vain peaceful fun
trying to extend, laughing.
Do not get reliable fame,
until the blood was shed ...
Cross wooden il cast iron
assigned to us in the coming darkness ...
Do not promise young maiden
eternal love on earth!
Words by Bulat Okudzhava. Music by Isaac Schwartz
Greatest battles in stories. The general picture of those dramatic events in the Austerlitz field in time is as follows:

04:00 - the shelves began to occupy the prescribed location
08:30 - the Allied army drove the French out of the village of Sokolnits
09:00 - Marshal Soult starts the attack in the center
09:20 - Allied army occupied the village of Telnits
10:00 - Marshal Davout counterattacks Buxgewden's troops on the right flank
12:00 - the center of the allied army is defeated, the Prazen Heights are completely in the hands of the French
14:30 - Allied army is defeated and retreats from the battlefield. 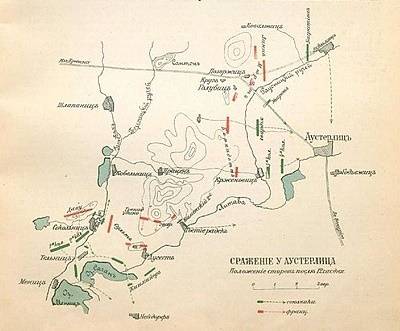 Map of the disposition of troops during the battle
Lieutenant General Langeron - a French aristocrat in the Russian service, later recalled that things went wrong from the very beginning. The troops were mixed, and the generals had to look for their regiments at night. Although it was a full moon, the sky was overcast and the light of the moon was of little help. Only by 10 or even 11 o'clock the columns could somehow line up and start moving. At the same time, the columns often crossed - "an unforgivable mistake for ... the most unfit staff officer." The meeting of the commanders of the columns began at 10 o'clock in the evening. It was announced that the exit of the columns will begin at 7 o'clock in the morning. Kutuzov slept at the council (or pretended to be asleep), but at the end of the meeting he woke up and ordered to translate the text of the disposition into Russian. Langeron later said that he received his copy only at 8 o'clock in the morning, only after the unit led by him had already performed. 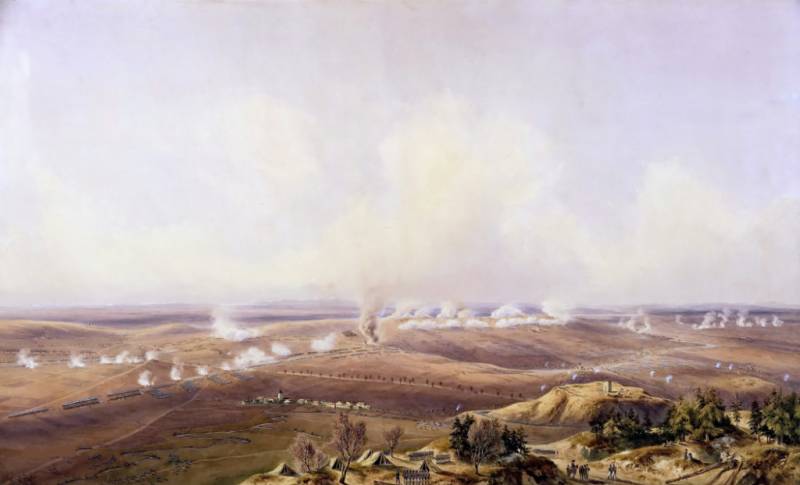 "Panoramic view of the battle of Austerlitz on December 2, 1805" from the side of the French army. Jean-Antoine-Simeon Fort (1793-1861). In the center of the Santon hill
At 8 o'clock in the morning, a bright sun shone over the battlefield - the "sun of Austerlitz", dispersed the fog, and the battle began. 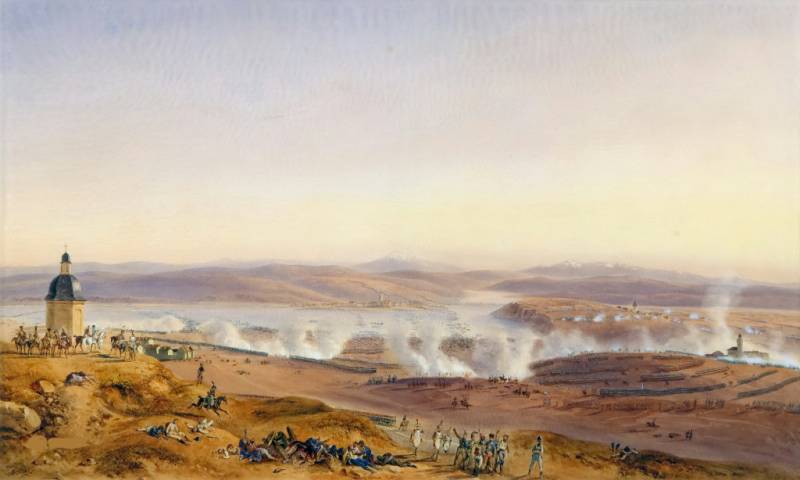 "Panoramic view of the battle of Austerlitz on December 2, 1805". Jean-Antoine-Simeon Fort (1793-1861). View from the hill at the chapel of St. Antonia, where Napoleon was with his headquarters
On the right flank, Bagration, with his 9000 infantry soldiers and 3000 cavalrymen with 40 guns, began an attack at exactly 8:00 and occupied Golubits and Krug. Whereas the Russian imperial guard under the command of vl. Grand Duke Constantine, moving forward, reached a height above the village of Blazovits. 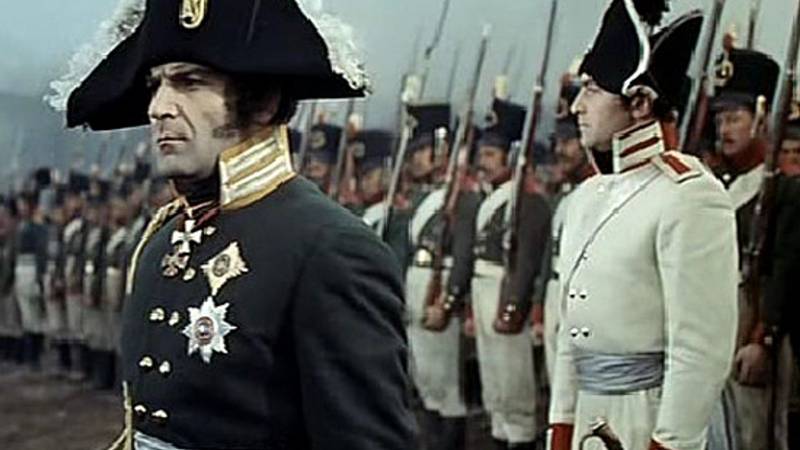 Prince Bagration on the field of Austerlitz. A still from the film "War and Peace" by S. Bondarchuk
In the center, Liechtenstein's cavalry was not where it should be, which is why Langeron and Przhibyshevsky lost an hour and were unable to strike Davout's units in time. As a result, the center was occupied by the fourth column of Miloradovich and Kolovrat, which was commanded by Kutuzov himself. The sovereign-emperor was also here with his retinue. 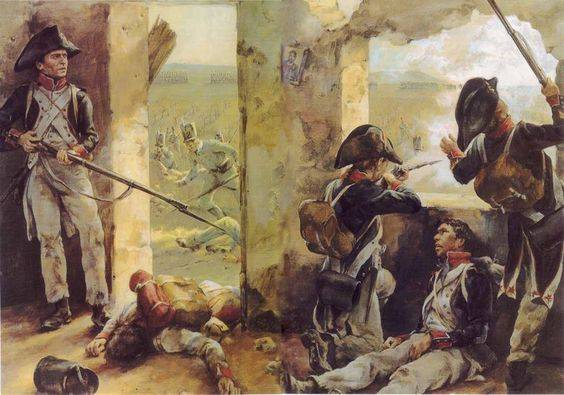 The 3rd French Line Infantry Regiment defends Telnits. Fig. Christa Hook
A fierce battle raged on the left flank. Austrian regiments of Kienmeier (4000 infantry, 1 cavalry and 12 guns) launched an offensive on the village of Telnits. Then the horsemen of Liechtenstein came to his aid. Dokhturov's column followed. Lanzheron and Przhebyshevsky attacked Sokolnits, although they were very much disturbed by the fog that thickened in the lowlands and became even thicker from the smoke of the shots. Count Buxgewden commanded the entire left flank of the allied army. He had at his disposal three columns at once, and he had a clear advantage over Davout's troops, but ... he did not manage to realize it, although he managed to capture the villages of Telnits and Sokolnits. In the fog, some French units began shooting at others, there was confusion, and this could be used. However, Buxgewden kept four infantry regiments in reserve and did not take advantage of the situation (thick fog). As a result, the French managed to regroup, and then at 9:00 to start a counterattack. 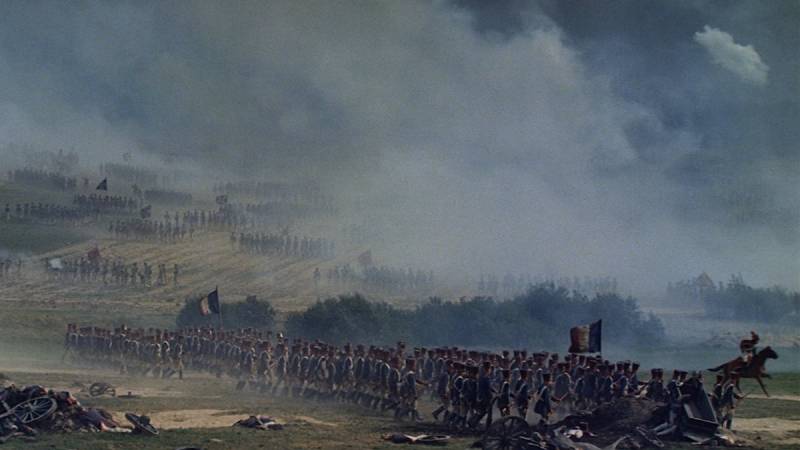 French troops in the fog go to the Prazen Heights. A still from the film "War and Peace" by S. Bondarchuk
Then Langeron began to realize that "something is wrong here." He went to Major General Count Kamensky 1st, who was attacked by Marshal Soult's units from the rear, although he was moving in the tail of the 2nd column. Lanzheron decided to withdraw part of his troops to the Pratsen plateau. But while he was driving back and forth, clarifying the situation, the French in Sokolnitsa, in turn, launched an attack, and he failed to do this.

The troops of the fourth column also began to descend from the Prazen Heights to attack Kobelnits at 8:30. At the same time, parts of Miloradovich literally "dived into the fog", which covered the entire lowland in front of the heights. But the sun drove away the fog. And suddenly, quite unexpectedly, units of Marshal Soult appeared right in front of them, preparing for an attack. The French fired a volley and rushed to the attack. The infantry regiments of Novgorod and Apsheronsky were defeated right in front of Emperor Alexander. Major Generals Repninsky 2nd and Berg 1st were taken prisoner.

Following the units of Miloradovich, the Austrians moved, but the French hit them with bayonets and were able to overturn. The Austrian infantry began an indiscriminate retreat, and they dragged along with them the battalion of the Izmailovsky Life Guards Regiment, sent at the request of Kutuzov by the Grand Duke Constantine to help his troops. All the artillery of the Austrians in this sector of the front was in the hands of the French, and Alexander was almost captured. It got to the point that Prince Volkonsky and General Weyrother were forced to personally lead the confused soldiers into the attacks. But at the beginning of the battle, Miloradovich tried to be in front of the tsar all the time, which struck many, although he did not give any practical orders. 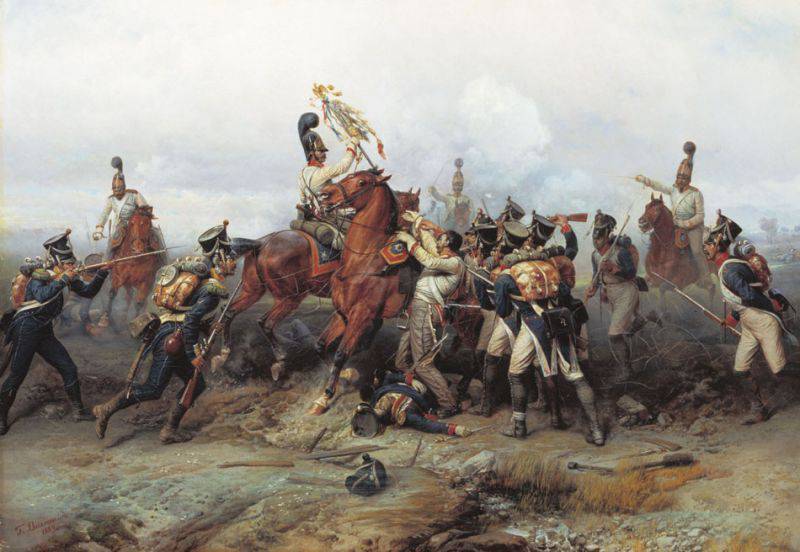 The feat of the Cavalry Regiment in the Battle of Austerlitz in 1805. Capture by horse guardsmen of the French battalion banner of the 4th line regiment. Bogdan (Gottfried) Villevalde (1818-1903). St. Petersburg Museum of Artillery and Signal Corps
It was already 11:00, but the Russian troops were still holding on to the plateau. And even more than that, they tried to counterattack the French, albeit unsuccessfully. So, General Thiebaud, for example, ordered to place the six 12-pounder cannons he received behind the formation of his infantry and load ... with cannonballs and buckshot at the same time. When he was told that it could damage them, he replied that after ten minutes of such shooting, nothing would be done to them. They were ordered to shoot from a distance of 15–20 tuaz (30–40 m), and aim at the belt buckle. Near each gun, ten canister shots and ten cannonballs were stacked to load as quickly as possible. 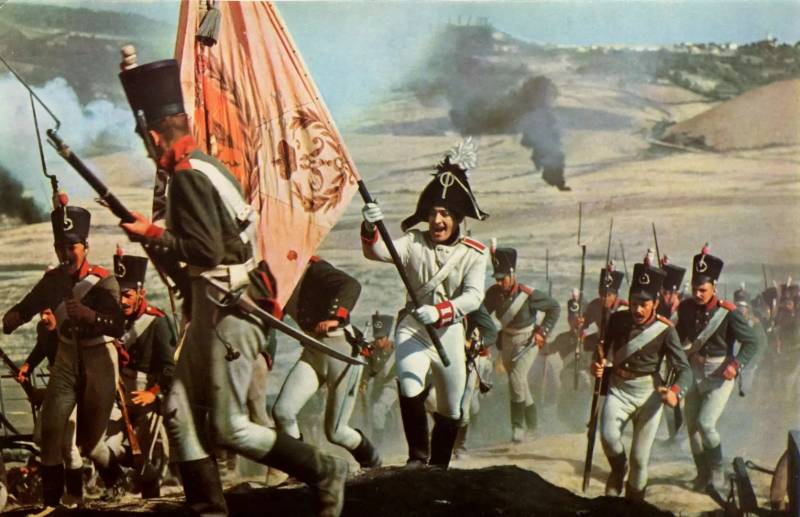 Prince Andrew is leading the infantry to attack! A still from the film "War and Peace" by S. Bondarchuk
When the Russian soldiers approached, the French infantry parted, and these guns opened fire, mowing entire glades in their ranks at once. So the French managed to stay on the plateau, and then squeeze out the remnants of the Allied troops from it. Kutuzov was wounded by a bullet in the cheek, and his son-in-law, the aide-de-camp of Emperor Alexander I, Count F.I. Tizengauzen, died trying to stop the fleeing soldiers, as did the Austrian general Yurchik. 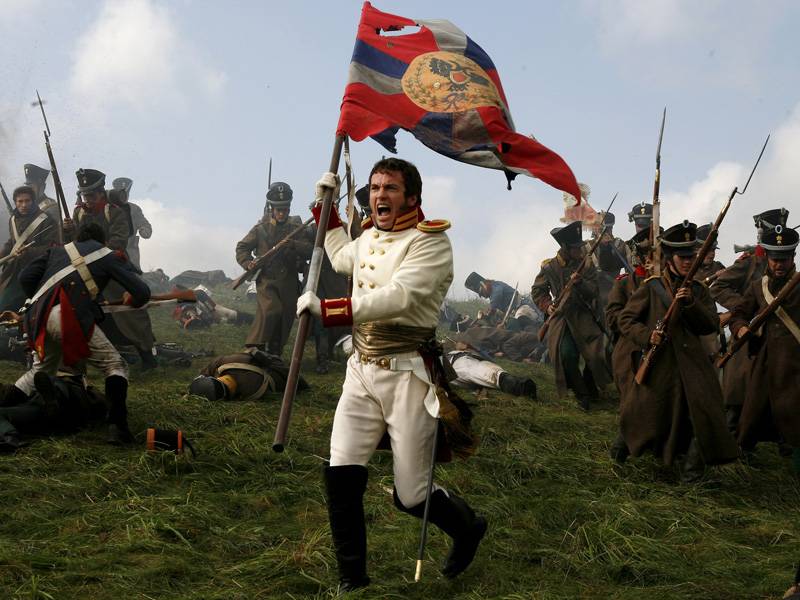 And this is also Prince Andrey, only from the 2007 series!
Thiebaud also ordered the soldiers to use rifles with bayonets attached and not leave "anyone behind them", since even wounded Russian soldiers often shot French soldiers passing by them in the back.

Thus, the center of the allied army was completely destroyed and retreated in disarray. However, Napoleon was still far from complete victory, because here the Grand Duke Constantine moved his guards regiments into the attack. 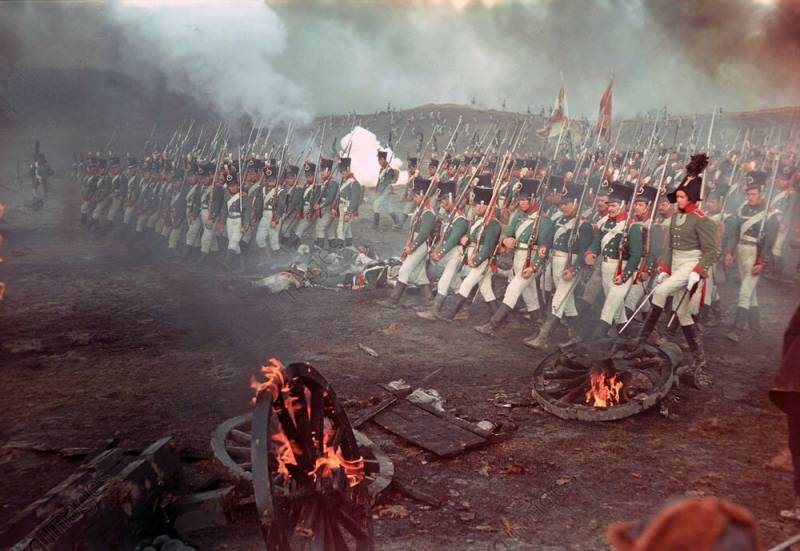 The Russian guard goes on the attack. A still from the film "War and Peace" by S. Bondarchuk
However, they were also stopped by the frequent fire of the French infantry and were unable to break through its lines. Moreover, they were surrounded by French cavalry and found themselves in a very difficult position. And then Konstantin decided to bring into battle the guards cavalry - cavalry guards and the Life Guards Cavalry Regiment. 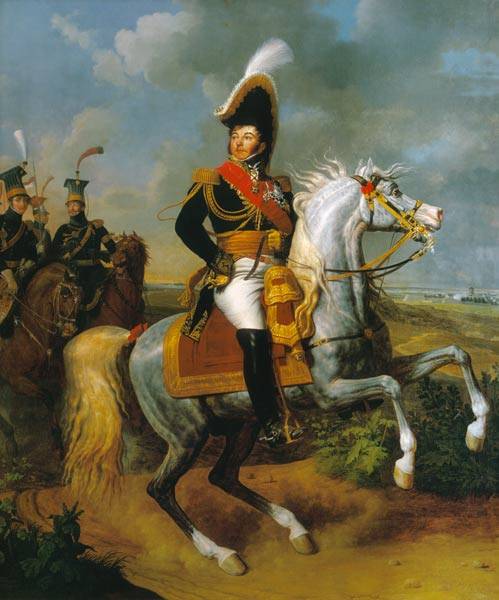 Equestrian portrait of General J. Rapp. Jean-Jacques Lagrenet (1739-1821). Unterlinden Museum, Colmar, Alsace, France
The French infantry lined up in squares and met the line of the Horse Guards with bayonets and point-blank shots, but could not withstand their blow and began to scatter. Napoleon, seeing the difficult situation of his infantry, in turn moved forward the mounted grenadiers, the mounted guards rangers, and then the Mameluk cavalry under the command of General Rapp.

And, of course, the young horse guards from the most noble Russian families were brave, loyal to their emperor and ready for self-sacrifice. However, they ... did not have any combat experience, which cannot be acquired on the Tsarskoye Selo parade ground. And the French turned out to be more, and they were more experienced ...

The French were seasoned warriors, participants in many campaigns, which, moreover, took place in the Camp of Boulogne, where the infantry learned to shoot perfectly, and the horsemen learned a variety of techniques of combat vaulting. Whereas for most of the Horse Guards, this was their first and last battle in their life! So, noticing the approaching French cavalry, the Russian cavalry hastened to line up to meet the enemy. But instead of rushing to meet him, the cavalry guards for some reason accepted him, standing still. And, of course, their first ranks were swept away by the blow of the heavy French cavalry, which gained acceleration. By the way, the cuirass of the cavalry guards (unlike the French) did not have. And this also played a negative role ...

"Napoleon at Austerlitz". General Jean Rapp (center), after the sacrificial attack of the Russian cavalry guards, presents to Napoleon the captured Prince Nikolai Repnin-Volkonsky (left in a white uniform). Behind him, the Napoleonic Mamelukes carry trophy banners. Francois Gerard (1770-1837). Versailles
The first attack of the Horse Guards was followed by the second, in which the Life Cossacks also took part.

However, this attack was not successful either. Colonel Prince Repnin and several officers were captured, the regiment lost many lower ranks (226 - killed, wounded and missing) and lost more than 300 horses. Bernadotte's French infantry then took Krenovitz and Austerlitz, abandoned by the allies.