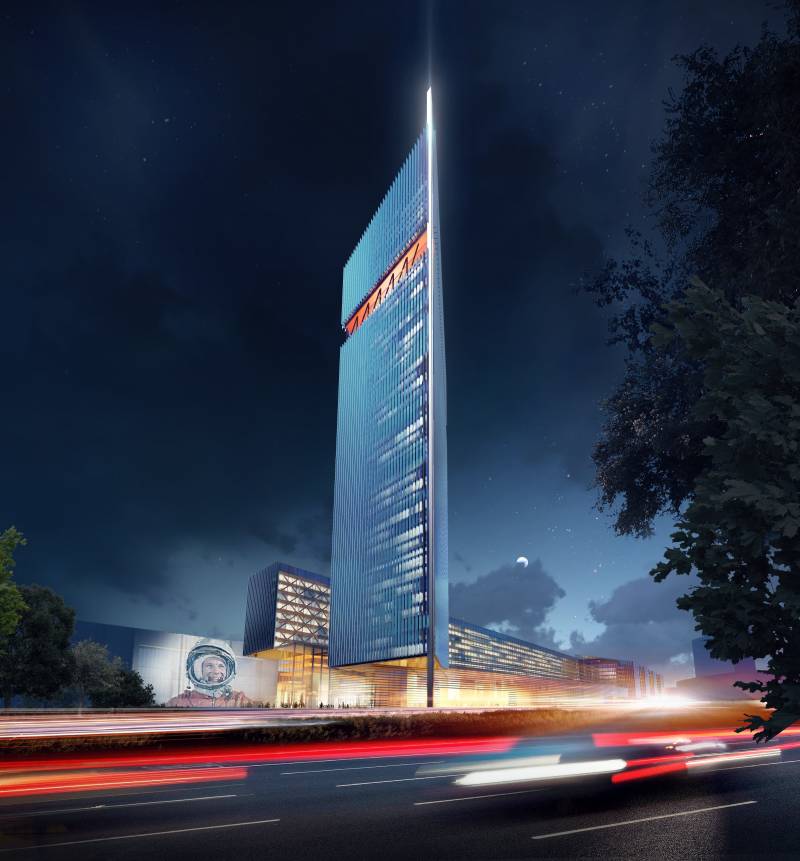 On April 12, 1961, Yuri Alekseevich Gagarin became the first in stories a person who made an orbital flyby of our planet.

On April 12, 2021, the Deputy Mayor of Moscow for Urban Development Policy and Construction Andrei Bochkarev announced the start of construction work on the construction of the tower part of the complex of buildings of the National Space Center (NCC):

At the construction site of the National Space Center, the construction of the main monolithic structures of the high-rise part has begun - 442 tons of reinforcement have already been installed and more than 1,2 thousand cubic meters of concrete have been laid in the main structure of the foundation slab.
The tower part is planned to be 47 storeys high (over 288 meters with a spire). Earlier, Moscow Mayor Sergei Sobyanin called this project the future largest center of the space industry in the world. It must be the largest in terms of construction volumes.

It is symbolic here, in our opinion, not only the coincidence of the calendar date of the "start" of projects in the space industry so different in meaning and content, but also the fact that the NCC is being erected on a part of the territory of the former Rocket and Space Plant named after Khrunichev. It is planned to build an industrial and public complex (technoparks, business centers) on the remaining share of the site. At the same time, some of the freed up land will go to the developers from the renovation program.

The fact is that the enterprise that previously occupied these 150 hectares (the Khrunichev Center), it turns out, has accumulated considerable debts. So, for example, the Center. Khrunicheva owes Vnesheconombank almost 9,5 billion rubles.

It is planned that the optimized enterprise, having vacated the areas it currently occupies, will move to part of the premises of the NCC being built now. The proceeds from the sale of land and premises will be used to pay those debts.

The first deputy general director of Roscosmos for economics and finance Maxim Ovchinnikov hopes that these funds will eventually be enough to pay off debts:

We expect that as a result of moving to the center, we will pay off all our debts. We also expect that the government will provide assistance in the region of 14 billion rubles to eliminate the deficit in operating activities.
But everything will not end with Khrunichev alone.

According to the same Maxim Ovchinnikov, the areas under construction at the NCC will be sold to various enterprises of Roscosmos from Moscow and the region, which will buy them and move to the NCC. The money for this purchase and for the relocation of the Roscosmos enterprise will be taken from the sale of lands and premises they occupy today. In other words, on a small part of the territory of the former "Khrunichev" several Moscow and regional enterprises of "Roskosmos" will have to fit at once. And the lands that they occupied before will be sold.

The logic of what is happening so far looks as follows: the less land our enterprises have in the space industry, the easier it will be for them to strive for the stars.