How Stalin escaped a war on two fronts 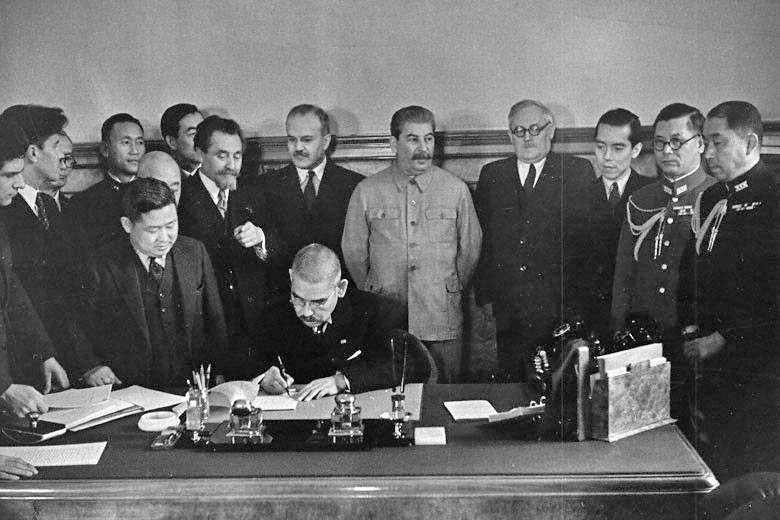 After the signing of the Tripartite Pact of September 27, 1940, the Japanese government decided to strengthen the alliance in order to use it to create a "sphere of prosperity for the great East Asia." It was supposed to include China, Indochina, Dutch India, Malaya, Thailand, the Philippines, British Borneo, Burma and the eastern part of the USSR. Tokyo was going to use the alliance with Italy and Germany, the big war in Europe and the collapse of the colonial empires to expand its empire. The Japanese have already captured the northeastern part of China (Manchuria), the coastal provinces of Central China and the island of Hainan. Taking advantage of the defeat of France by Germany, the Japanese occupied part of Indochina, and thus almost isolated China from the outside world.

The Japanese also aimed at the Russian lands. They already tried to take over the Russian Far East during the Russian Civil War. However, then their plans failed. In 1938-1939. the Japanese army made a number of attempts to invade Mongolia (allied with the USSR) and the Far East. Soviet troops pushed back the enemy at Lake Khasan and inflicted a heavy defeat on the Japanese at the river. Khalkhin-Gol.

The Japanese military-political elite, feeling the power of the new Russian army and the Soviet industrial power, after some hesitation, put their actions in China and Southeast Asia first. In order to seize strategic footholds, provide a resource base and thereby create the possibility of further conquests. Hitler, believing in a quick victory over Russia, did not insist that the Japanese immediately begin an offensive in the Far East. Berlin believed that Japan should first of all defeat Britain in the Far East, seize Singapore and divert US attention. This will weaken the British Empire and shift the center of gravity of US interests to the Pacific Ocean.

In early 1941, the Japanese launched an offensive in southern China. With the actual loss of the coast, China was isolated from the outside world. The main assistance to the Chinese resistance at this time was provided by the USSR. Through the northwestern provinces of China, Russia supplied weapon, equipment, ammunition, equipment and fuel. For example, from November 25, 1940 to June 1, 1941 alone, the Soviet Union delivered 250 combat aircraft. Soviet volunteer pilots fought against the Japanese aggressors before the start of World War II, when they were urgently needed in their homeland. In addition, Moscow kept a large military grouping in the Far East, thereby depriving the Japanese command of the opportunity to use the Kwantung Army against China.

The ruling circles of Thailand (Kingdom of Siam), which had previously focused on Britain, decided that it was time to change their patron. The Japanese supported plans to create a "Great Thai" at the expense of the territories of French Indochina. It came to war. Japan has assumed the role of arbiter in this conflict. The Japanese also attracted Germany. Berlin put pressure on the Vichy regime to prevent France from sending reinforcements to Indochina. Japanese ships arrived at the ports of Thailand. In the occupied part of Indochina, Japanese garrisons were increased. The French generally fought better than the Thais. But at the insistence of the Japanese, the fighting was stopped.

The peace conference of Siam, France, the colonial authorities of Indochina and Japan, which opened on February 7, 1941 in Tokyo, was chaired by Japanese Foreign Minister Matsuoka. The French had to yield, although they were not defeated. On May 9, 1941, peace was signed in Tokyo. Siam received about 30 thousand square meters. kilometers of territory with a population of 3 million people at the expense of Cambodia and Laos. At the same time, the Japanese imposed an agreement on trade and navigation on French Indochina. This allowed Japan to intensify its economic expansion in Indochina. Siam became a military ally of the Japanese Empire.

Initially, Tokyo wanted to avoid, or at least delay, a direct clash with Britain and the United States. Hoping, through pressure and negotiations, as well as the German threat, to achieve the consent of London and Washington to seize China and the countries of the South Seas. Fleet it took time to prepare for war. The German attack on Russia was supposed to create a favorable environment for Japan in the Asia-Pacific region. In turn, the United States, as before, hoped to postpone the war with Japan for some time at the expense of China and Russia. The owners of the United States planned to start the war after the mutual weakening of Germany, Japan and Russia.

The question of the sale of Northern Sakhalin

Considering the fact of its defeat in the Khalkhin Gol region and turning to the south, Tokyo decided to improve relations with Moscow. Therefore, Japan declared its desire to improve relations with the USSR. Moscow agreed. Soon the parties began negotiations (November 1930) on the settlement of disputed economic issues. Japan agreed to ensure the payment of the last installment for the Chinese Eastern Railway. The fishing issue was settled. In June 1940, the issue of the borders between Mongolia and Manchukuo in the Khalkhin-Gol River region was resolved.

Since the summer of 1940, the Japanese government, aiming at domination in Asia, sought to quickly normalize relations with Moscow in order to avoid a war on two fronts. In July, Japan, through its ambassador in Moscow, Togo, offered to begin negotiations on the conclusion of a Soviet-Japanese pact of neutrality. The Japanese side proposed to base the pact on the Beijing Convention of 1925, which, in turn, was based on the Portsmouth Peace Treaty of 1905. The 1925 convention was in the interests of Japan, since it gave the Japanese the primordially Russian land - South Sakhalin. Also, the convention provided for the creation of Japanese oil and coal concessions in Northern Sakhalin. These concessions have caused constant conflicts between the parties.

Nevertheless, Moscow decided to start negotiations on a neutrality pact. We needed peace in the Far East. At the same time, the Soviet government proposed to liquidate the Japanese concessions in Northern Sakhalin. On October 30, 1940, Japan made a new proposal: to conclude a non-aggression pact, not neutrality, as before. The 1925 Convention was no longer mentioned. On November 18, Moscow gave the answer: it proposed its draft of a neutrality pact, but it was connected with the settlement of controversial issues. In particular, an agreement was proposed to liquidate the Japanese concession in Northern Sakhalin. In return, the Soviet government guaranteed Japan the supply of Sakhalin oil for 10 years in the amount of 100 thousand tons annually.

Tokyo did not accept these proposals. The Japanese advised the Soviet side to sell Northern Sakhalin. Thus, Japan sought to complete the success of 1905 - to get the whole island. Moscow declared that this proposal was unacceptable.

In February 1941, Tokyo announced the imminent arrival of the Foreign Minister to meet with the Soviet leadership. On March 23, 1941, Matsuoka visited Moscow and the next day announced that after visiting Berlin and Rome, he would like to start negotiations on improving relations with the Russians. On March 26, the Japanese minister arrived in Berlin. The Japanese clarified the position of Germany. Hitler said he would like to avoid US involvement in the war. At the same time, Hitler instilled in Matsuoka the idea that Japan would not have a better moment to defeat England in the Pacific. In Berlin, they made it clear to Matsuoka that Germany's war against the USSR was inevitable. Matsuoka assured the Nazis that the pact of neutrality with Moscow, which Japan plans to conclude, would be immediately dropped as soon as the Soviet-German war broke out.

Nevertheless, Japan decided that they needed a pact with the USSR while the war was going on in the Pacific. On April 7, 1941, Matsuoka was in Moscow again. He again put forward a condition for the sale of Northern Sakhalin. Obviously, Tokyo believed that Moscow, under the threat of a war with Hitler, would make big concessions to Japan in the Far East. Matsioka said that in exchange for this concession, Japan is ready to replace the Portsmouth Peace Treaty and the Beijing Convention with other agreements, to renounce some of its "fishing rights". However, the Japanese miscalculated, Stalin was not going to give up Northern Sakhalin. The Soviet side categorically refused to discuss this issue. Only on April 13, Matsuoka surrendered, and the pact was signed.

Both sides pledged to maintain peaceful and friendly relations, respect the territorial integrity and inviolability of each other. In the event of an attack by another power or powers, Japan and the USSR pledged to adhere to neutrality. The pact is valid for 5 years. Japan has pledged to liquidate its concessions in Northern Sakhalin. In the annex to the pact, both sides pledged to respect the territorial integrity and inviolability of Mongolia and Manchukuo.

Thus, Stalin's government solved the most important task on the eve of the war with Germany. Russia avoided a war on two fronts. Japan this time avoided the trap set by the United States and Britain. The Japanese realized that they wanted to be used in the war with the Russians. And they played their game.

Obviously, Moscow and Tokyo understood that the pact would be broken off immediately as soon as external conditions changed. With the success of the blitzkrieg of Germany, Japan would immediately seize the Russian Far East.

Russia returned to the issue of returning its ancestral lands and restoring strategic positions in the Far East when victory over the Third Reich in Europe became inevitable.

Ctrl Enter
Noticed oshЫbku Highlight text and press. Ctrl + Enter
We are
Once again about preparing Japan for war against the USSR in 1941America vs England. Part of 17. Big bets Big games
Military Reviewin Yandex News
Military Reviewin Google News
104 comments
Information
Dear reader, to leave comments on the publication, you must sign in.