August 28 2012
352
7-th International exhibition "Russian Defense Expo 2012", held in Nizhny Tagil, were able to visit about 25 thousands of people. One of these 25 thousands was Deputy Prime Minister of Russia Dmitry Rogozin, who oversees the military-industrial complex. This, by the way, is the only Russian official of such a high level who took the time to get acquainted with the samples of military equipment displayed at the test site and in specially equipped premises.

Initially, the organizers said that the Russian president should arrive at Expo 2012, but then it turned out that Vladimir Putin had canceled his visit. Surrounded by the president, the cancellation of the visit was connected with the preparation of Putin for the APEC summit in Vladivostok. 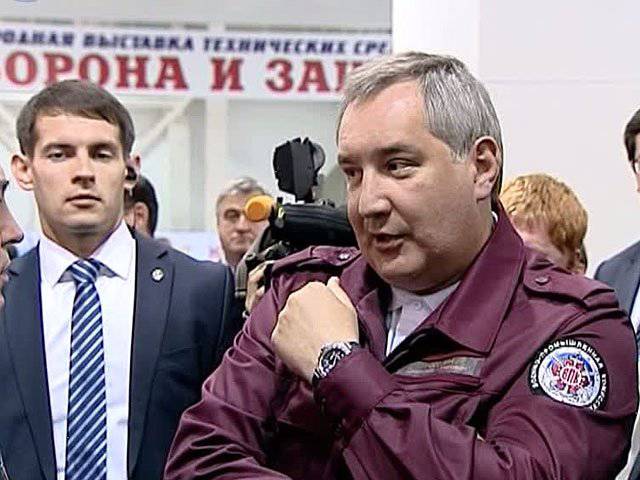 In total, during the exhibition, 253 products of various enterprises were demonstrated, most of which represented the Russian Federation. If we talk about foreign participation, the 3 countries acted as direct participants of the Expo-2012 in Nizhny Tagil and another 28 states sent their own, let's say, observers.

The past exhibition of many experts has caused very ambiguous comments. On the one hand, there was optimism about the fact that there are more and more domestic samples of military equipment and dual-use equipment at Russian international exhibitions. On the other hand, the experts expressed the opinion that interest in such events from foreign companies is falling, and the equipment developed abroad and displayed at such exhibitions is not distinguished by high quality and reliability.

Dmitry Rogozin expressed similar thoughts, saying that the exhibition demonstrated a systematic increase in the quality of domestic products from the defense industry, what should be paid attention to when purchasing equipment for various units of the Ministry of Defense and the Ministry of Internal Affairs of Russia. At the same time, the Deputy Prime Minister blamed the Russian generals for the fact that they too often began to travel over foreign Eskpo counterparts and bring out ideas about mass purchases of foreign equipment, although instead of generals, in his opinion, Russian designers should be able to better assess the quality foreign samples. And with these words, Rogozin is difficult to argue. Although many believe that there is nothing wrong in buying foreign copies of military equipment.

At the same time, the majority of Russians who are interested in the state of affairs in the domestic military-industrial complex have in their memory the words of federal officials that only single technical samples will be purchased for the needs of the Russian army, with advanced samples in its class. However, this bureaucratic promise is still far from its real embodiment into reality.

If you pay attention to those samples of military equipment that are either already purchased from foreign companies or can be purchased in the near future, then many questions arise questions.

The first question concerns Israeli drones, for the delivery of which to Russia the Ministry of Defense managed to conclude a contract. As soon as this contract was signed, some representatives of the Israeli side immediately stated that they did not intend to transfer new technologies to Russia. In particular, Amos Gilad, the director of the Israeli military-political service at the Ministry of Defense, said this at the time. In particular, Gilad said that Russia receives from the company Israel Aerospace Industries an unmanned aerial vehicle Sercher-2, which is manufactured according to technologies developed in the early 80-s. Therefore, it is impossible to say that Israel is transferring new technologies to Russia. Well, if the Israelis themselves say so, the situation with the purchase of technology from this country looks rather strange ... In total, the Ministry of Defense acquired the Israeli side of 12 UAV BirdEye-400, Searcher II, and I-View Mk150. Then agreements were signed on buying from Israel more 36 drones. But this was not limited to the Russian Defense Ministry: it was decided to increase the fleet of UAVs with 15 vehicles.

The contract cost the Russian Ministry of Defense 400 millions of dollars, but this is the amount that went only to pay the Israeli side. Due to the fact that the experts of the Kazan Helicopter Plant will deal with the Israeli unmanned "old men" Searcher II to bring the mind to the platform, you can safely increase this amount n times, since the Defense Ministry intends to receive only its own drone using Israeli technology . Recall, technology is not advanced, because the Searcher II was put into operation in Israel itself back in the 1998 year.

The second question concerns the purchase of "single" samples of foreign armored vehicles. Here we are talking about the purchase, and then about the production on the territory of Russia of Italian Iveco LMV M65 Lynx armored vehicles, which we have already received the name “Lynx”. True, here it is necessary to immediately note that even from the outset, there was no talk of a domestic product about single purchases and production based on these purchases. Initially, the Ministry of Defense decided to produce 727 machines, and now they are talking about the need to increase the production of Italian “Rysya” to 3 thousand units. It would seem, well, is there such a thing if an armored car is reliable ... Why reinvent the wheel if you can just make it under a foreign license? But the thing is that the “Lynx” armored car doesn’t differ by great reliability. The “Lynx” began to show its clumsiness immediately from the moment of its first appearance in Russia. It turned out that for her the snow-covered terrain is a serious obstacle, and there is no reason to speak about the terrain. So at the recently held “Lynx” forum in the city of Zhukovsky “Technologies in mechanical engineering-2012”, they drove exclusively on flat platforms, so as not to damage the crankcase ... such serious quantities (3000 pieces), began to express clearly skeptical opinions.

It is this mediocre quality of purchased weapons and military technology of foreign production that made Rogozin launch several critical arrows at the Russian Defense Ministry. Many have already managed to christen the words of the vice-premier that it is high time to start paying attention to the development of the domestic sphere of the military-industrial complex, as opposed to purchases of frankly low-quality foreign technology, a serious attack on Anatoly Serdyukov. However, it must be recalled that the main initiator of the purchase of military equipment from foreign manufacturers was Dmitry Medvedev, who at that time held the presidency. But only Medvedev then talked about purchases quality military equipment and, as he put it, at transparent prices. Anatoly Serdyukov, in his usual manner, decided to partially fulfill Medvedev's requirements: foreign equipment, indeed, began to buy, but legends can be made about its quality ... As for the transparency of the pricing policy, things are not going well. Hundreds of millions of dollars for Israeli 30 ideas a year ago can hardly be called an adequate price.

In general, the question of manning the park with new military equipment for the army and fleet, remains at the stage of debate. If this debate is too long, the Ministry of Defense will continue to spend millions on foreign samples of dubious quality. True, to say that absolutely all domestic military equipment has a phenomenal quality, today, unfortunately, also impossible. Where is she, this golden mean? ..