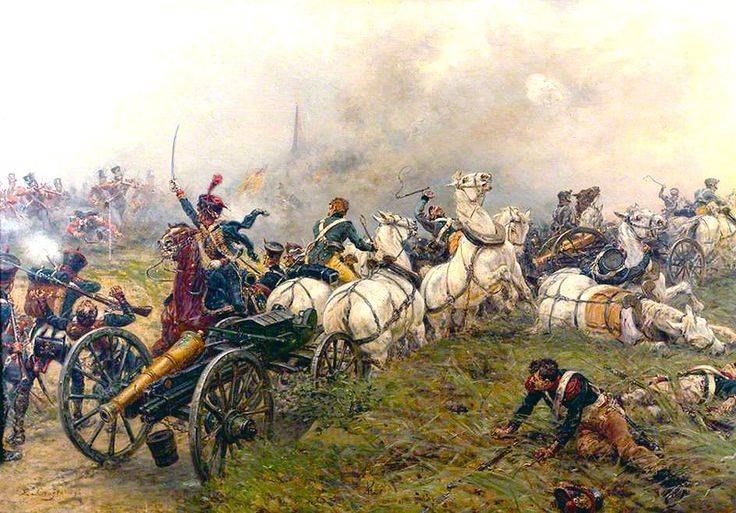 French mounted artillery at the Battle of Waterloo. Painting by Ernst Croft.

During the entire period of the French Revolution and the First Empire, the French army used artillery systems developed by General Jean-Baptiste Griboval. Griboval carried out a radical reform of the French artillery in 1776, and his work was continued by General Jean-Jacques du Thuy (1738-1820). The reform was aimed at standardizing artillery weapon (by limiting the types and calibers of guns), to reduce the mass of guns (to improve their maneuverability), to standardize auxiliary equipment (especially limbers and ammunition boxes) and to increase the level of training of gunners.

The barrel of a 4-pounder cannon was 1,6 meters long and weighed 289 kg, and with a gun carriage - 1049 kg. It cost 1760 francs to manufacture a gun, and half a franc to produce one cannonball. In the charging box of such a gun, there were 100 charges of buckshot with large lead balls (42 for buckshot) and 50 charges with small balls (60-100 for buckshot). In addition, in the front end, it was possible to carry 18 additional charges of buckshot with large lead balls. Such a weapon was served by 8 people, 5 of them were specialists.

The barrel of an 8-pounder cannon was 2 meters long and weighed 584 kilograms, and with a gun carriage - 1324 kg. It cost 2730 francs to manufacture a gun, and 1 franc to produce one cannonball. In the charging box of such a gun, 62 charges of buckshot with large lead balls and 20 charges with small balls were placed. In addition, in the front end it was possible to carry 15 additional charges of buckshot with large lead balls. Such a weapon was served by 13 people, of whom 8 were specialists.

The barrel of the 12-pounder gun was 2,3 meters long and weighed 986 kilograms. Together with the gun carriage, the cannon weighed almost 2 tons. Such a gun cost 3774 francs, and the cannonball cost 1,5 francs. The charging box held 48 charges of buckshot with large lead balls and 20 charges with small balls. In addition, in the front end it was possible to carry 9 additional charges of buckshot with large lead balls. Such a weapon was served by 15 people, of which 8 were specialists.

The barrel of a 6-inch cannon was 0,7 meters long and weighed 318 kg. A howitzer with a gun carriage weighed 1178 kg. The cost of a howitzer is 2730 francs, and a cannonball is 1 franc. In the front end, it was possible to carry 49 charges of buckshot with large lead balls and 11 - with small ones. Such a weapon was served by 13 people, of whom 8 were specialists.

To protect against moisture, the wooden parts of the carriages, limbs and charging boxes were painted with green paint, mixing 2500 parts of yellow ocher with 30 parts of ink. Metal parts (especially gun barrels) were painted with black paint to protect them from rust. However, the paint peeled off rather quickly and fell off after a few shots, as the barrels were warming up. In practice, the gunners had to paint their guns after every battle.

The Griboval system lasted the entire Revolution, and it was not until 1803 that Napoleon Bonaparte created a commission under General Auguste Marmont (1774–1852) to consider the feasibility of introducing certain changes. By that time, it turned out that many French officers could not cope with the selection of the appropriate caliber of guns, and to solve the tasks of the battlefield, they used either too weak (4-pounder) or too strong (8-pounder) guns.

At that time, the Prussian and Austrian armies used 6-pounder cannons, which successfully replaced both 4- and 8-pounders. This is why Bonaparte approved the commission's recommendations and decided to gradually introduce 6-pounder guns while keeping 12-pounders. But soon (in 1805) it turned out that, in view of the growing needs of the Great Army, it was impossible to abandon the production of guns according to the existing Griboval system. Thus, until the end of the First Empire, the French army used 4-, 6-, 8- and 12-pounder cannons.

On a campaign against Russia, Napoleon took 260 six-pound cannons (which he considered the most useful) and 30 four-pound guns, but, according to the testimony of the imperial adjutant, general. Gaspar Gurgo, not a single 8-pounder cannon. Having lost all 6-pounder guns during the retreat from Moscow, the Great Army in the campaigns of 1813 and 1814. was forced to return to the Griboval system. That is, to use, first of all, 4- and 8-pounder guns, not as convenient and versatile as the 6-pounders, which were already widely used by the Russians, Prussians and Austrians.

At the end of the XNUMXth century, the Griboval system was adopted by some other European armies, in particular the Piedmontese, Bavarian and Spanish. Therefore, fighting these armies, the French could use captured weapons, which practically did not differ from their own. In addition, the French gunners were trained to service the Prussian, Austrian, Russian and English guns, which they willingly used, if they were able to capture them.

In 1796 Bonaparte increased his artillery with guns taken from the Austrians and Piedmontese. Marshal Louis Davout began the battle at Auerstedt with 40 guns, and ended with an additional 85 guns taken from the Prussians. In the 1807 campaign, Marshal Jean de Dieu Soult's corps consisted of 48 guns, of which 42 were Austrian 6-pounder guns, captured two years earlier. The Spanish guns captured by the Polish light cavalry at the Somosierra pass were handed over to the Polish artillery company attached to the so-called division of the Duchy of Warsaw.

In the same way, the French used captured ammunition. After the Battle of Wagram, for example, General Jean Ambroise Baston de Lariboisiere paid 5 sous for each cannonball removed from the battlefield. Thus, he managed to collect over 25000 cores and make up for a quarter of his ammunition consumption in this battle.